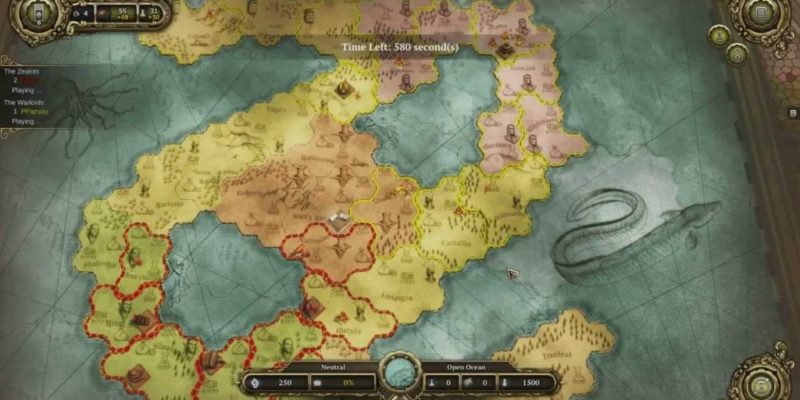 The PC is being inundated with tantalising ‘world map’ strategy games at the moment. Civilization V’s Brave New World expansion came out a short while back, Europa Universalis IV arrives next week and Total War: Rome 2 will be marching out of early September. Crashing into this mix with Impish war machines, columns of fire and dialogue as sharp as any Elvish blade comes Larian’s Divinity: Dragon Commander.

Since Larian was responsible for Divinity II: The Dragon Knight Saga (one of the greatest recent RPGs not made by a studio named Obsidian,) hopes for this title should be pretty high. Dragon Commander moves the series into the realm of grand map strategy and real-time battles, which is a bit of a swerve away from pure RPG-ing; but then Divinity has always had a certain fluidity of structure.

Did I mention that Dragon Commander’s maps are lovely? They are lovely.

Time-wise, this is a prequel to the other games in the series. You’re the not-at-all-unlikely-in-this-universe offspring of the former King and a half-dragon lady and have the handy ability to turn into a dragon pretty much at will. As if that talent doesn’t already mark you as the genetic high point of the Royal offspring, the rest of your siblings are a bit … ‘touched.’ Who knows where else the King has been spreading his regal seed, but it’s resulted in a brother who strips off his own skin in the belief that he’s undead and a sister who cut out her own tongue.

Naturally, there are elements who don’t think these people would make great candidates for the next ruler, so they’ve turned to you as the next best thing. The wizard Maxos, former advisor to the crown, has stolen the Imperial airship (The Raven) and rounded up some Generals to back your campaign for the throne.

That sets the scene for the single player campaign, and provides you with a main base of operations for your research, plotting and strategising.

David Icke was right, lizards really do manipulate our economic policies! Oh wait this is a fantasy game.

In a blend of real-time and turn-based action, each ‘round’ of Dragon Commander takes place across three stages. The Raven is the hub from which you chat with your generals, make sweeping political decisions that affect the regions you’ve conquered, research new technology and dragon skills, and possibly court a royal wife in a marriage of convenience.

After you’ve conducted all the business you need to on board the airship, attention turns to the world map where you can construct new troops, move your existing ones around, construct special buildings to give you bonus income and play some strategy cards (which may sabotage enemy movements, increasing a country’s population and so on.) If any of your military movements bring rival armies together, you’re offered the choice of taking personal command of a real-time battle, allowing one of your generals to handle it or leaving it to the Imperial army to deal with.

It’s only possible to fight one personal battle per turn and only one conflict can be handled by a general (oddly, since you have four of them.) In other words, it’s best to avoid getting into too many scraps at once or you’ll be rolling the dice on the basic army being able to get you through some auto-resolved battles. After the fights are all concluded, it’s back to the Raven for more political banter and the start of another round.

You should select purple as your army colour, as it makes deadly barrages prettier.

Dragon Commander’s great success is the manner in which those pieces overlap and affect one another. It’s too often the case with games that combine several genres that each segment feels disparate and not quite part of a single whole. Not so here.

Pretty much every action taken on the Raven will have a knock-on consequence of some kind for either your resources or the status of provinces on the strategic map. That will influence how you approach the movement and distribution of your troops, and that will ultimately determine where you pitch battle and what units you enter the skirmish with.

The results of your political choices can sometimes be a bit oblique, however. I’ve yet to figure out what ‘reduced luck’ actually impacts, and Dragon Commander is sometimes a bit lax in showing the consequences of each action in plain text. You’re sometimes shown summarised details at the start of a turn, but often are not.

But weighing up those political decisions is entertaining in itself. Larian’s writing is confident enough to present serious issues in the context of their own fantasy world and adopts a tone that’s wry enough to get away with it. You’ll discuss whether the explosively reckless Imps should be allowed to deal mercifully with any scientists burned beyond hope (euthanasia,) the merits of the crown paying for injuries to Dwarven miners (state health care) and, if you take things far enough, even whether to abolish your own rule and establish a republic (constitutionalism.)

It was tempting to just feature Edmund in every one of these screenshots.

It helps that the voice acting, a couple of weaker links apart, puts some higher budget titles to shame. Hoighty-toighty (and racist) lizardman Edmund is an obvious, early highlight, but his fellow lizard Prospera also gives a measured performance. The demented, science-gone-mad background to the Imps makes their characters shine, and (even though I tended to agree with his views) the Elf councillor constantly undermines himself with his glorious pomposity.