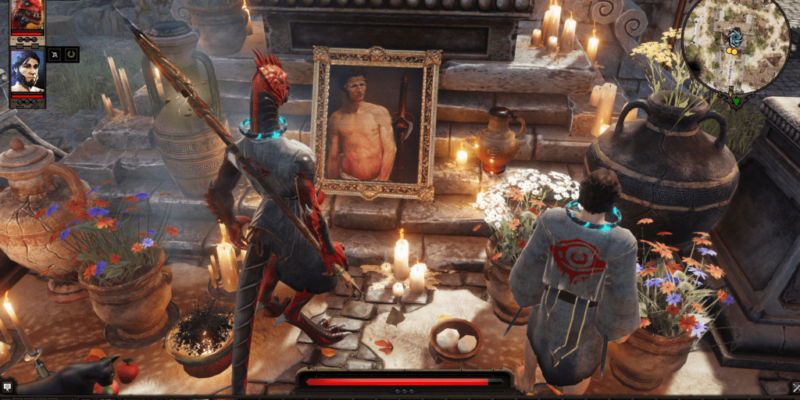 Everybody who played and enjoyed the first Divinity: Original Sin will remember the importance of the Pet Pal talent. ‘Importance’ is relative I suppose, but I’m not sure how anybody could’ve truly experienced Rivellon without getting burglary tips from rats and setting up cats on hot dates. Pet Pal is back in Divinity: Original Sin 2, but so far it seems to mostly open the door to animal misery. In this Early Access build I’ve used my Doctor Doolittle powers to inform an estranged dog couple that they’ll never be together, told a different dog its master will never wake up, and watched an adorable bear cub crying over the corpse of his dead mother.

Sure, there was an arrogant crab in there too, and a rat who seemed obsessed with hearing about my incredible adventures. But these were brief departures from the cavalcade of animal woe.

That’s fairly appropriate as a tonal microcosm, because Divinity: Original Sin 2’s opening act (which is basically what you get in Early Access right now) is pretty bleak. The first game had you investigating a murder, which admittedly isn’t a cheery premise, but the sequel outright starts you off in a concentration camp. To make people feel more at ease, the camp authorities have called it Fort Joy. Lovely. 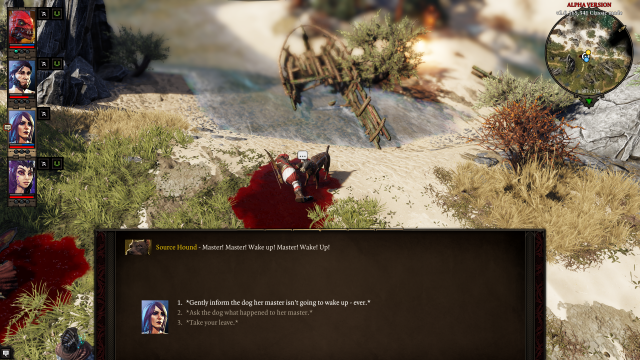 Harsh realities in the canine world.

In Original Sin 2, ‘The Divine’ (no, not the guy from John Waters films, a different god-like being) is dead and nasty creatures called Voidwoken are showing up all over the place. The local Magister group has opted for full zealotry on the issue and decided to round up everybody with an affinity for Source (dubbed, once again, Sourcerers) as the culprits. Just for good measure, they’re using ancient Source-purging techniques and a side order of torture to ‘cure’ their prisoners. Fort Joy is not going to be topping any lists at TripAdvisor.

While the first game offered lots of character class options, it limited your racial choice to human. For Divinity: Original Sin 2, your character (just one; while co-op is still very much in, you no longer role-play two characters in single player) can also be a cannibalistic Elf, haughty Lizard-person, or a Dwarf. Undead will be an option in the full game (or later in Early Access), but isn’t there just yet.

Fully custom characters are still possible, but Larian have included some default creations with fleshed out back-stories as well. Choosing one of these means you’ll have a more specific story to follow in the game, with more directed plot points. A ‘tag’ system (Scholar, Jester, etc) enables you to give your custom character an approximation of a history too, and opens up additional dialogue choices and NPC reactions. I opted to fulfill my lifelong dream of becoming a lizard by choosing The Red Prince, and making him a Knight (for the pre-written characters, you can still change their class). 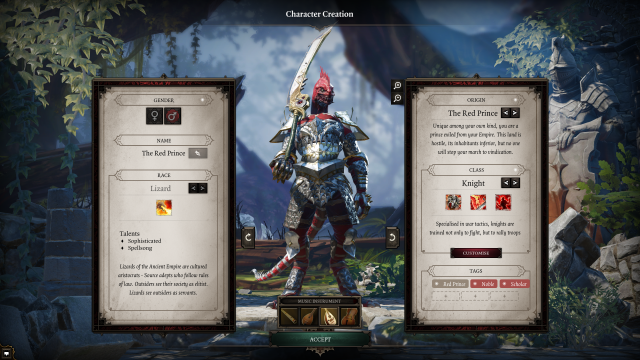 I can breathe fire, dig holes without a shovel, AND control the world as a shadowy member of the lizard-Illuminati.

Character creation has seen further refinement too, from the small but welcome switch to dynamic portraits (so your head-icon actually looks exactly like the character you made) to significant changes in stat distribution. In Divinity: Original Sin 2, combat and civic (social-ish) skills are now in separate trees. This is excellent, because it means you no longer feel you’re leaving a character behind as a fighting force by investing in abilities like bartering or loremaster. Since you now periodically get leveling points which can only go into civic abilities, there’s no down side to giving your party some rounded talents.

You can apply almost all of those talents to getting out of Fort Joy, which, despite its dour, prison-yard tone is as much of a freeform sandbox as the opening town in the first game. I’m not sure how many ways in total there are to escape from your predicament, but I well believe the numbers like ten or eleven that have been tossed around. You can follow quest-lines for multiple opportunities to get inside the Magister building itself, figure it out yourself with some deft use of teleportation skills, or (inevitably) just start a big fight at the entrance. Once inside, there are (again) multiple exits. It’s even possible to confront the act’s ‘boss’ early.

Original Sin’s tendency to push your party towards kleptomania has been toned down a bit. You can still wind up as Fort Joy’s greatest underground art dealer if you put your mind to it (which does rather highlight that this prison economy is pretty weird – people will pay top dollar for art, but for some reason won’t give me all the money in the world for a key to their escape), but NPCs are now more protective of their stuff. If you do get away with nicking something, it’s forever branded as STOLEN in your inventory, reminding you of your misdeeds. Or triumphs. Depending how you feel about that. 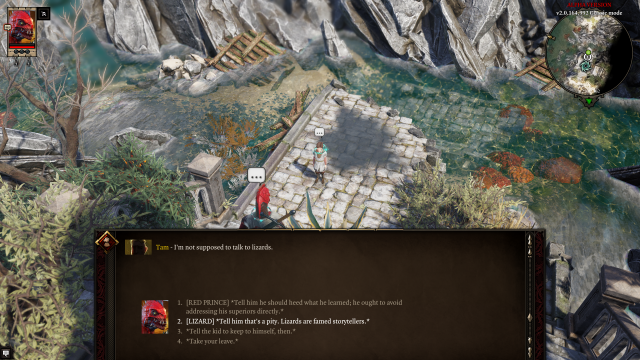 Befriending the locals, one child at a time.

In an unconventional move, Original Sin 2 adopts a second-person perspective for all your dialogue replies and text actions, much like an old Fighting Fantasy book. Rather than “I don’t think that’s a good idea”, it’ll say *Studying the man’s face, suggest that wouldn’t be a good idea*. This seems to be dividing people, but I think I quite like it. It gives the writers room to include a little more environmental and descriptive detail into your possible responses. And, to be honest, I grew up reading those old Fighting Fantasy titles so there’s some nostalgia at play there.

While we’re on the subject of fond memories, the combat in Divinity: Original Sin 2 builds on the turn-based systems which earned so much praise in the prior game. Physical and magic armour are probably the most evident additions, each providing a buffer against basic attacks and special skills. If you take a physical hit for 65 damage and have 50 physical armour, for example, you’ll only eat 15 damage (but will also be left without armour for the rest of the encounter). Basically, it forces the player to make a few more early strategic choices rather than immediately breaking out a regular set of stun and knock-down moves. You can still take some people out early, but it now involves paying attention to whether they’re, say, unprotected from magic.

The elements and attendant status effects remain fully in play for Original Sin 2 as well, and have expanded to allow Bless and Curse to affect matters too. Stick Bless on a pit of fire, and it suddenly becomes holy healing fire instead (likewise, Curse can turn the elements into places of disease and contagion). Combat still has a couple of minor problems; the motion of some enemy idle animations means you can sometimes miss-click and just move next to them rather than attacking, and your party members still don’t give much care to avoiding environmental hazards with their path-finding. The latter is arguably on the player to pay attention to and map out a tactical path, mind you. 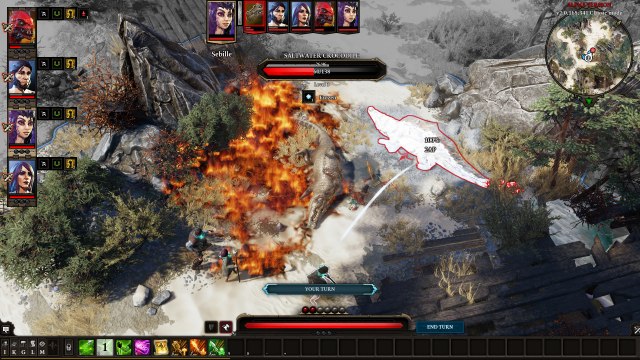 Another notable tweak is the addition of a Memory stat, which is now what determines how many spells/abilities a character can ‘know’ at any one time. This is very flexible, as you can sub in new ones at pretty much any time outside of combat, but does mean that if you want a magic-user with a large array of spells at their command, they’re going to have to sacrifice some other stat investment to achieve this.

A certain amount of quality-of-life changes have come over from the Enhanced Edition release of Original Sin, too. Dragging and dropping items on portraits, the ‘magic pockets’ system that can teleport quest-critical items around the place, and so on. Inventory management is still a bit of a hassle though, even with a few sorting filters in place (Larian, if you’re reading, please add an auto-sort button that re-groups all the items of the same type together – or ignore this if I somehow missed one that already exists).

Being in Early Access, Divinity: Original Sin 2 is obviously a work in progress. Some of the quests in this first act are still unfinished, or lacking clear resolutions. A few of the fights feel like they’re still in need of some balance tuning (particularly the final confrontation; yikes), and there are slight bugs with dialogues, NPCs not recognising that you’ve already performed an action, things of that nature. That’s all to be expected at this stage, and mirrors Original Sin’s development. 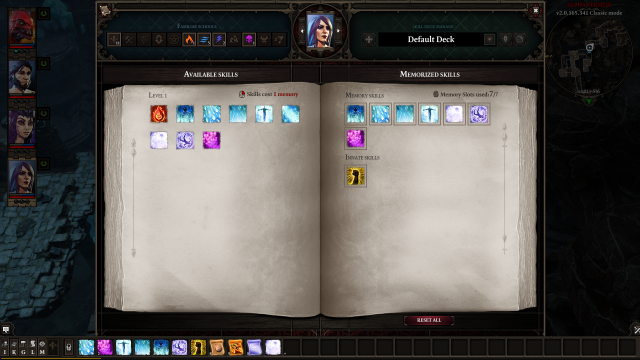 But … I want ALL of those spells.

It’s quite pricey ($45) to buy into Divinity: Original Sin 2 at this stage, so while I have no doubts that Larian will complete and fully release this game, it might make sense to wait. All the terrific stuff here; the returning combat systems, the incredible variety and freedom in escaping Fort Joy, and the ability to manipulate the game’s rule-sets in clever ways to make progress, will be present and correct (and probably even more polished) upon release. It’s an Early Access project that’s pretty safe to buy into if you’re keen to see 10-15 hours of Act 1 and leave comments that may guide development, but there’s going to be little to lose from holding off until the entire thing is finished. Hopefully by that stage I can engineer some slightly happier endings for my animal kingdom friends too.

Bioshock Remastered update coming to address issues such as stability