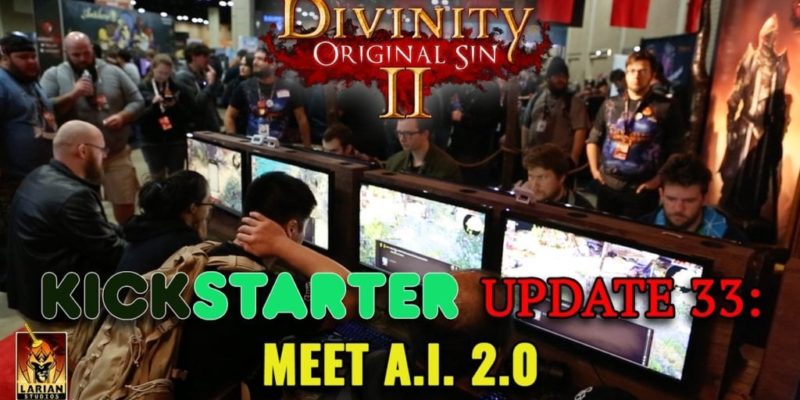 Revisiting Divinity: Original Sin 2 in Early Access will be harder experience after today, thanks to Larian’s introduction of an AI-boosting patch. The snappily named Patch v3.0.31.292 adds an ‘AI 2.0’ system, making the NPC combat encounters a lot more taxing.

As explained in the Kickstarter update video (below), this update makes the AI much more aware of its surroundings and environmental situations it can exploit. It’ll make better use of (say) explosive oil barrels, potential debuffs, and will also duck itself out of range of return fire or possible environmental hazards. Interestingly, the video goes over a few examples of the AI thinking outside the box and using things like Rage (intended as a buff) as an actual debuff on foes.

At present, it sounds like the AI is intentionally tuned to be very difficult. Larian say they are “aware this will feel more like our hard core Tactician mode”, but want plenty of feedback to help them “tweak the numbers correctly”. If some players are finding too easy, they want to know about that too. Ultimately, it sounds like certain AI capabilities will be toggled on or off according to the difficulty level a player chooses in the final release version; but first Larian need to collect lots of lovely data.

The new patch is extensive (see beneath the video for full patch notes), so older Divinity: Original Sin 2 saved games will no longer be compatible. It’s possible to regress to a previous beta if you wish to just continue on with your current save. Instructions on how to do that are in the post linked in the first sentence (it’s the usual Steam beta opt-in dance).

Larian also say they have a release date ‘in mind’ for Original Sin 2, but that concrete details of that won’t be announced for another couple of months (in case schedules change and so on).

By Robert Workman58 mins ago
News