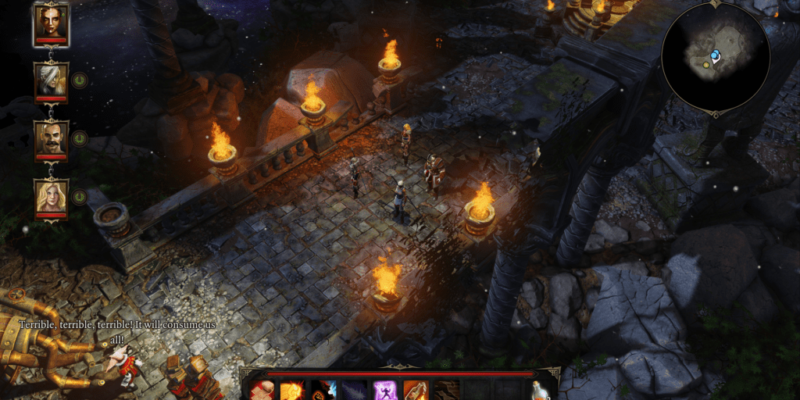 The reader-crowned best PC game of 2014 (back when PC Invasion was IncGamers) has returned, under its new title Divinity: Original Sin Enhanced Edition. Good news for me, because I’ll take almost any excuse to dive back into Larian’s superb RPG. Even if it’s just a comparatively brief 4-5 hour trip around Cyseal to see some of the changes. 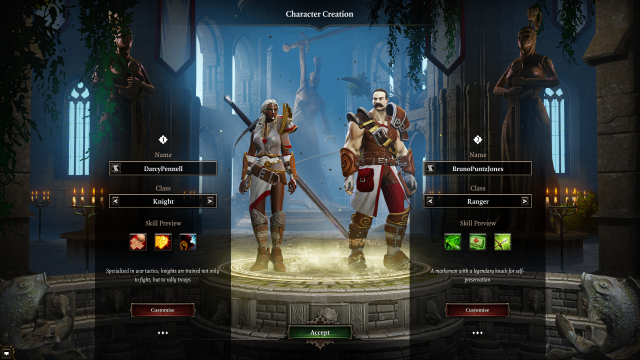 Storm from X-Men and Buff Pringles Guy, reporting for duty.

Right after being deposited on the beach by a pirate captain who seems unusually invested in your heroes solving the local murder, you’ll probably notice that the Enhanced Edition looks a little nicer. Lighting seems softer and more subtle, and there’s a non-intrusive Depth of Field effect applied when you zoom closer (which might have been in the original, but none of my old screenshots have it). It’s now possible to spin the map through 360 degrees of rotation too. Handy for some of the tighter spots where the automated fade-out of obstructive scenery isn’t quite doing the job.

Once you’re done with Divinity: Original Sin Enhanced Edition’s sandy introductions (and optional tutorial dungeon) and start interacting with NPCs in Cyseal, you’ll find a lot more of them yapping their jaws at you. Larian’s promotional blurbs say they’ve gone all-out to give every character in the game a voice and, excluding a few silent lines of dialogue from my own pair of heroes, this does indeed seem to be the case.

The presence of voice-acting isn’t an automatic improvement, but for the most part I’ve enjoyed the additional vocal-cord warblings of some previously silent citizens. Alistair, the self-styled star of the Fabulous Five, is now selling his arrogance and bravado through a pretty gutsy Rik Mayall/Lord Flashheart impression. Larian’s RPG has a pretty goofy tone throughout, and the director has clearly nudged the actors portraying the more outlandish characters into getting as theatrical and flowery in their deliveries as possible. 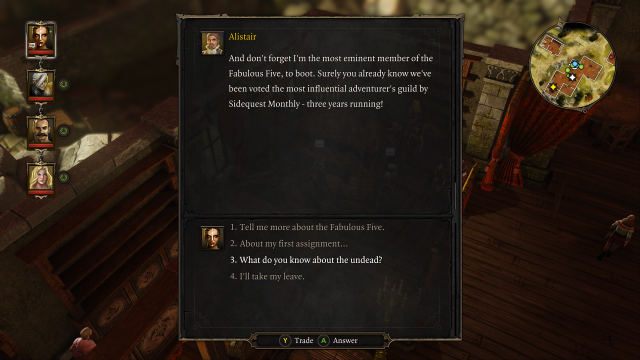 “Next time you get bored give us a call, and we’ll come round and KILL YOU.”

Having a competent voice actor relishing in some silly dialogue helps sell some of the lines that fell a bit flat when they were purely in text form, but listening to all of this stuff does take a lot longer than just reading it. Divinity: Original Sin is comfortably within the realms of 80-100 hours in length, and I admit that even within the first few hours I was starting to skip through some of the longer monologues. That’s no indictment of the acting, simply a case of being able to read more quickly than they can emote, and wanting to get on with things.

It’s difficult to conclude much about re-written or re-structured quests from the comparatively shallow slice I’ve replayed so far (the ending has apparently been comprehensively overhauled), but a few changes have already cropped up. At least, I’m pretty sure they have.

Divinity: Original Sin Enhanced Edition’s introduction to the grand, over-arching plot of the game seemed clearer and, unless my memory is acting up, presented the Weaver of Time character at an earlier point. Cat-loving wizard guy Arhu is now linked to the main plot too, and acts as a sort of agent for the inter-dimensional weirdness. I’m fairly confident that’s new.

I ran into more promising party members to recruit in Cyseal as well, though these were actually added to Original Sin around three or four months after release so they’re not strictly part of Enhanced Edition. For those who didn’t get to see them the first time around, though, they’ll provide additional party options. Originally, you could only hook up with Jahan (air/water wizard guy and all-round MVP for out of combat healing) and Madora (the curiously Texan-sounding two-handed swordswoman). Larian added the raised-by-bears Bairsdotr (basically a ranger) and mute scoundrel (but loveable with it) Wolgraff to round out your choices for unique companions. 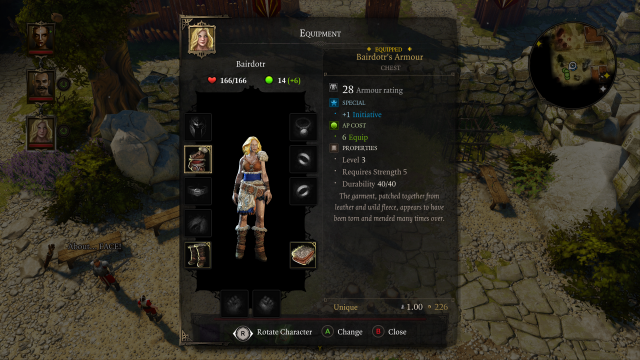 Wolgraff makes use of something that is new to the Enhanced Edition though: the dual wielding skill. He now comes equipped with a second dagger, aptly named ‘Wolgraff’s Other Dagger’. Larian have rejigged the weapon ability progression to further differentiate between slower, heavy strikes and quick, nimble ones. Two-handed attacks will eat up action points, but hit hard (and should crit more regularly), while dual wielding is all about getting in multiple rapid attacks.

Abilities and talents have been re-balanced and tweaked to a degree that’s beyond the scope of this article, but to give you an idea it’s no longer possible to make yourself semi-invincible by taking both Leech (heal when stood in blood) and Comeback Kid (a ‘killing’ blow will leave you alive, but with very low health). Traders seem to offer better quality items for sale now, which is in-keeping with the suggestion that Divinity: Original Sin Enhanced Edition has also rebalanced the general economy. Loot generation is less random, and what you’re going to get in any given chest is now ‘fixed’ to some degree (reloading shouldn’t alter the prize).

It’d be foolish of me to try to critique either of these things in a meaningful way, because the value of changes with that kind of depth will only really become clear on a full play-through. Something, sadly, that I can’t dedicate the necessary amount of time towards. 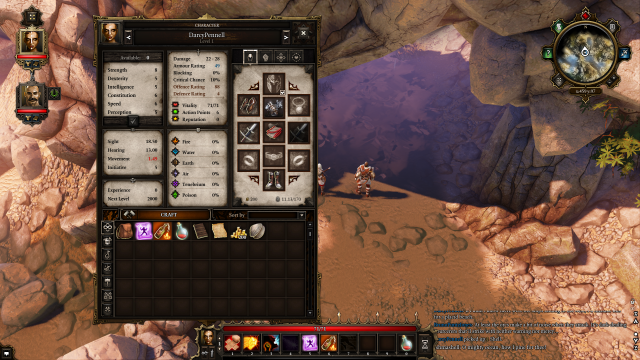 Sure, that inventory looks fine at the very start of the game. But ten hours later it’s going to look messier than an incontinent orc’s pants.

Several ‘quality of life’ changes are apparent and very welcome, though. Enhanced Edition introduces the concept of ‘magic pockets’, which allows the automatic transfer of certain necessary items (keys, shovels and so on) to the party member performing the action. No more faffing about with finding and transferring a door key. Similarly, when someone in your party has the Loremaster skill needed for identifying mystery items, this can be done in anyone’s inventory. It’s a small change, but a useful time-saver.

There is still some degree of Inventory Management Simulator 2015 to Divinity: Original Sin, however. The UI for sorting and categorising items has improved since the game first launched (again, like the added companions, I think some of this stuff was added in prior patches and updates), but it’s still kind of a pain at times. Find a special arrow in a chest or on the ground, and you either need to be using your archer when picking it up, or distribute it to them later through some micro-management. Aspects like that still feel clumsier than they probably could be.

The fantastic ‘magic pockets’ system also made me realise how much I’d appreciate a ‘magic Pet Pal’ function too. Having to switch to the one person in the party with Pet Pal whenever I want to talk with an animal (instead of the game just recognising that someone has that ability) feels a touch unnecessary. 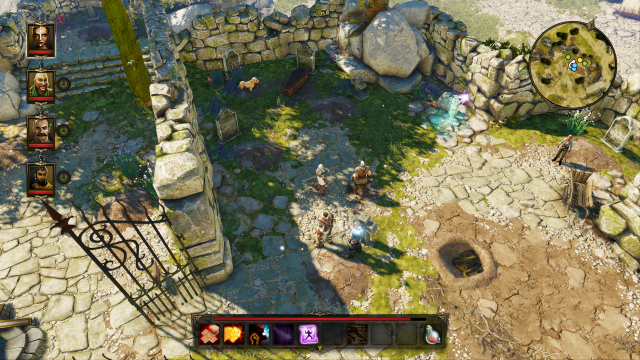 Everyone should have a chance to talk to this dog.

Overall, Divinity: Original Sin Enhanced Edition takes a great deal of care in making meaningful improvements to what was already an exceptional release, so it seems a bit petty to dwell too much on other hypothetical changes that could’ve made.

The switch to DirectX 11 has resulted in the rare (but always welcome) combination of fancier graphics and better optimised performance. My rather outdated i3-2100 / 8GB RAM / 7870 machine struggled with some of Divinity: Original Sin at below-par settings, but appears happy to run the Enhanced Edition at ‘Ultra’ with a few dips from 60fps to the mid-50s (something I’m perfectly happy to live with). Saving seems faster than before too, which is helpful for a game where regular quicksaving is highly recommended.

An inevitable down-side to using DX11 is that the system requirements (specifically a compatible graphics card and a 64-bit OS) are now more stringent than Original Sin’s. Those hoping to get away with playing on a near decade-old GeForce 8800 (which, amazingly, was actually possible before) will have to stick with the older version of the game. 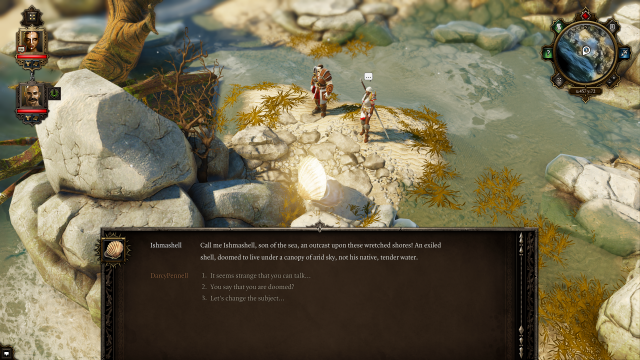 There’s that Depth of Field effect I mentioned earlier. Not usually a fan of DoF, but this one is pretty subtle.

In the process of getting Divinity: Original Sin Enhanced Edition ready for a PS4 and Xbox One release, Larian have put together one of the more impressive controller support schemes I’ve seen for a complex RPG. The mixture of radial menus and hotbars are not (nor ever could be) as efficient as playing with mouse and keyboard, but the fact that Original Sin now has a non-intrusive and very usable gamepad interface could well be of interest to some PC users. Especially those who might have their box hooked up (or streaming) to a TV and fancy giving the Enhanced Edition a go.

Unfortunately you can’t (yet) mix keyboard and controller for a local co-op game on PC. Nor is the mod system ready for Enhanced Edition at present, but that will definitely be coming in a future update.

If you didn’t get chance to play this in June last year (particularly if you own the first version but haven’t got very far), Divinity: Original Sin Enhanced Edition can’t come with much higher recommendation. Again, it was our reader-voted Best Game of 2014, and the changes made to this re-release have only improved the unique, element-manipulating combat and open-ended questing. Plus, everybody needs to experience the career trajectory of becoming Rivellon’s finest art thief at least once. 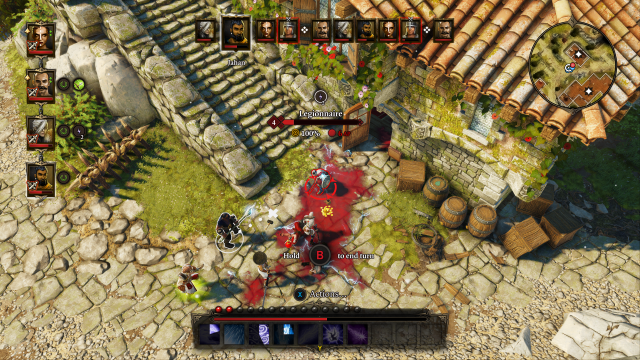 My house burgling skills have got a bit rusty. Also, here’s what a fight looks like on a gamepad.

Those who’ve already played through the game have a tougher personal decision to make. Larian have made a lot of sensible, informed changes to their title, but it’s difficult to see them as impetus alone for a completely new play-through. Unless, of course, you were already itching to do so, perhaps with a co-op partner or new character build. You might also fancy the challenge of Enhanced Edition’s ‘Tactician Mode’, which, judging by the first orc encounter on the beach does not intend to pussyfoot around.

Whatever the case, it’s terrific just to see this outstanding RPG back in the limelight. Divinity: Original Sin Enhanced Edition deserves every accolade it receives, and likely has a good shot at picking up something in PC Invasion’s 2015 awards.

Mirror’s Edge Catalyst delayed to May 2016