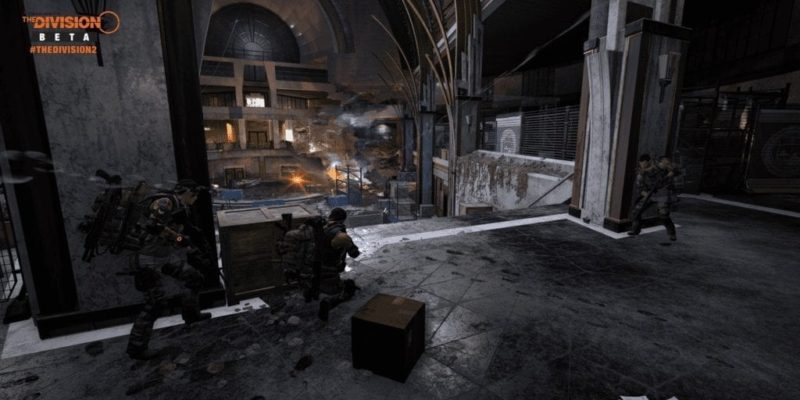 Yesterday, I was able to detail my impressions of The Division 2’s private beta. Although disconnections had impeded my progress early on, I’m glad to say that Massive Entertainment has fixed those issues for the most part. Since then, I’ve completed a number of extra missions while also exploring the Dark Zone and Conflict PvP modes. I also checked out a sneak peek of the early endgame content. This one pertains to an “Invaded Mission,” which, sadly, led to more doubts invading my thoughts.

For starters, one of the reasons I was put off by the first game’s content was because there just wasn’t enough of it. By the time you reached max level and fine-tuned your character, the only activities you had left were uninspired Incursions or re-running the Lexington or Russian Consulate missions. The Invaded Mission follows that formula for better or worse. 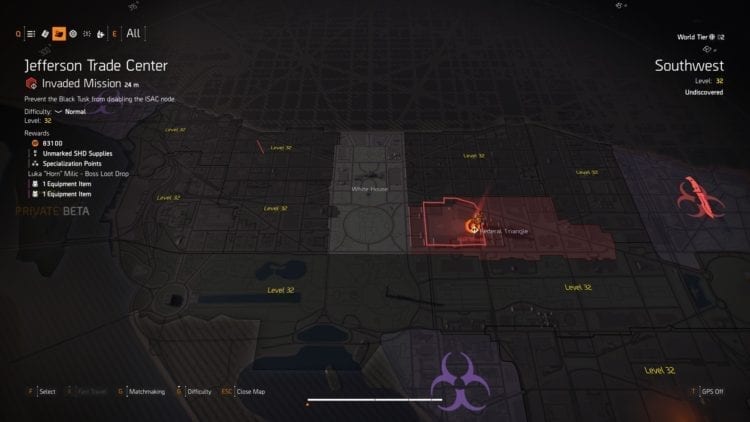 The sneak peek only covers one such mission and you’re unable to head to other areas on the map.

Once you finish the Jefferson Trade Center mission during the private beta, you’re notified that you can access a sneak peek of an Invaded Mission. This one also takes place in the same location. You’re essentially going back to the same area, albeit with tougher enemies this time around in the form of Black Tusk mercs.

The beta gives you access to three Level 30 characters decked out in high-end (golden/exotic) gear. Your new characters will also have specializations, each with their own signature weapons:

All of these sound fine at first glance, right? Well no, not really. Veterans of the first Division game know that “specializations,” back then, simply meant “signature skills” which you could use after a lengthy cooldown. That generally meant just using Survivor Link (defense and speed buff) for high-end content or PvP. In The Division 2, a little balancing was done — gone are one-trick pony skills, replaced by specializations. The problem is that these hardly mattered during the endgame sneak peek for two reasons: 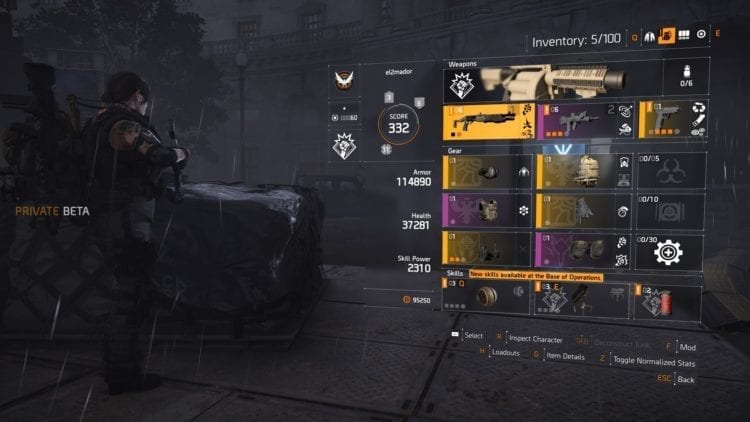 Look at all the shiny gear. Too bad everything’s useless against bulletsponge mobs.

Your signature weapons have limited ammo. Once you’ve used them up during a mission, accessing a crate does not replenish them. They can drop from enemies (much better if you get headshot or explosion kills), but the drop rates are abysmal.

The enemies you encounter are also Level 32 (two levels higher). This shouldn’t be a problem in certain shared-world shooters like Destiny where killing Vex goblins or Fallen dregs in raids is a non-issue. In The Division 2, regular mobs might as well be mini-bosses because they take half a dozen magazine clips to put down. I’m not kidding — I emptied 400 light machine gun bullets to a yellow-bar mob’s face and the guy was still standing!

Your Level 30 agent’s offensive skills barely helped as well. I can’t even recall a single time when one of my smart bombs or turrets managed to kill an enemy. Also, the most my grenades did was tickle mobs. 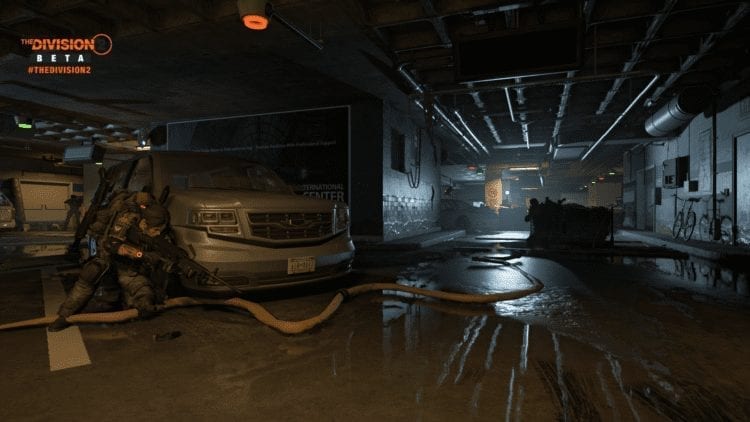 Most of the “action” consisted of crouching/getting into cover, or running back to a previous corridor when enemies appear.

The entire activity slows down considerably. That’s acceptable for a tactical shooter, but too much and it becomes extremely tedious. The first game had this problem as well but, by then, you had crit builds or Tactical Link to help with the DPS. Then again, this might simply be due sub-optimal builds or loadouts for our endgame sneak peek characters.

I do appreciate the varied enemy types for the Black Tusk faction, though. They’re a shady mercenary group that employs high-tech weaponry. Heavily armored troops carrying Gatling guns and mech walkers did surprise our team. Still, their abilities felt more “spammy” than anything else — exploding drones that pushed you out of cover, anyone? 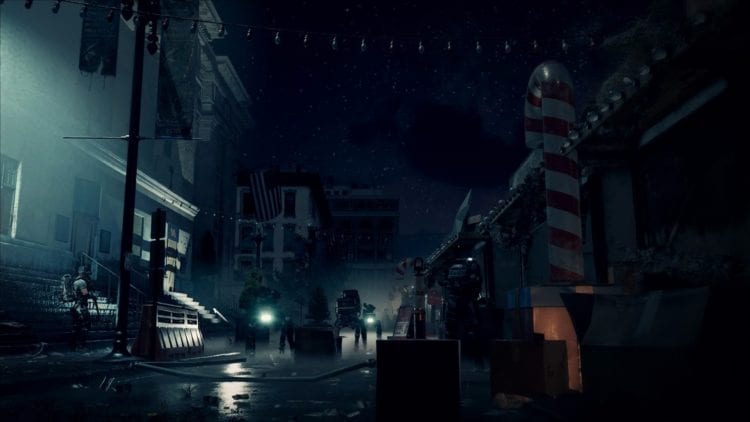 Weapons that can surpass Metal Gear.

I rarely ventured into the Dark Zone during the first game due to exploits and lack of balancing, and so I’m hoping for a more refined experience this time around. The moment I stepped in Dark Zone – East (one of three PvP zones in The Division 2), I immediately felt tense seeing other players milling about. I knew that one false move and I’d turn rogue, or entire teams could turn rogue to gank me.

I also found out via Reddit that there’s a Dark Zone exploit of sorts. Players can start opening loot caches which allows their teammates to shoot other people. If the gankers are on the losing end, the player simply stops opening the cache and their teammates are no longer flagged as hostiles. It’s a good thing these issues are made known during the beta so that fixes can roll out before the launch.

As for Conflicts, consider this your more traditional PvP experience. Two teams of four players each are spawned in a small map to duke it out. Downed teammates can be revived. If they’re killed, that deducts a point from your reinforcement pool. Firefights were especially hectic and coordination was key — you can’t “go Rambo” because that’d easily get you and your teammates killed. I was also appreciative of the fact that you can stay in the matchmaking queue while doing other activities.

Overall, given that I’m not much of a PvPer when it comes to The Division, these are features of the sequel which I’ve yet to fully experience. I do hope more bug fixes and balancing does happen to make PvP worthwhile. Right now, it seems that armor repair drones are going to be an absolutely necessary skill in PvP — much like in PvE, mind you — due to extra survivability. 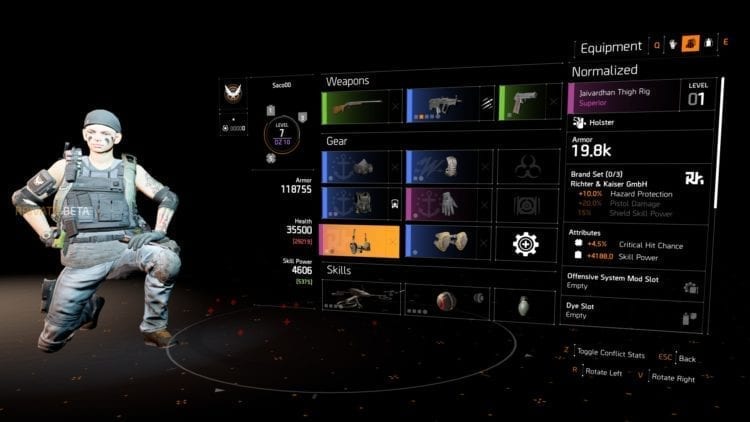 Purple gear is ridiculously strong that you’ll want some of these equipped when you’re doing PvP.

The Division 2’s private beta gives you a small glimpse of what you can expect from the full game. If you want to give the private beta a try, it’s available until February 11, 4 a.m. EDT.

It seems that Washington, D.C. residents found the game’s scale lifelike, and there have been a number of improvements especially with exploration incentives and more loot caches to grab. As mentioned in the previous article, The Division 2 already has top-notch visuals, audio, exploration, and overall presentation going for it. Likewise, connection issues look like they’ve been fixed for the most part. Now, it’s just the UI and menu navigation (especially for PC players), along with clunky controls which can be a hindrance during hectic firefights.

As for the endgame, my doubts are due to the nature of Invaded Missions. Granted, this is just one mission so far, but it also led us to an area we’ve already been to. The only differences here were the enemy types and their considerably tougher defenses which made the entire run a slog. If the only thing we can expect moving forward are bullet sponges and predictably slower gameplay, it does not bode well when it comes to keeping people interested. The 8-man raids, which will arrive sometime after the game launches, might provide a more unique endgame experience. Still, they have to be more than just the same wave-clearing or room-clearing activities that we’ve seen before.

I know that many long-time fans are eager to see Massive Entertainment succeed, but they have a lot of work to do to see all their plans come to fruition. We’ll find out just how much has changed, and if the endgame looks promising, once The Division 2 is out on March 15.