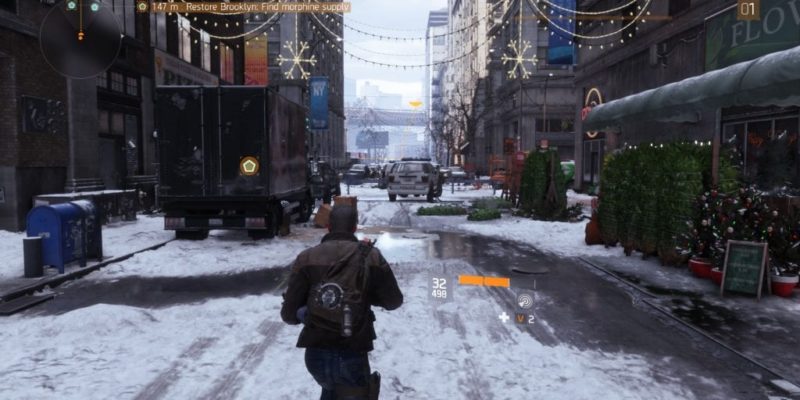 So far The Division has taught me that money allergies are no joke, anyone could be a special ops agent just hanging around waiting for a national crisis, and that the employment center can get really crowded if everybody shows up at once and tries to squeeze around the mission-giving laptop. If you’re lucky though, you’ll end up on a British server and everything might be nice and orderly.

In other words, a neat mix of Clancy-grade paranoia and inadvertent videogame social experiments.

The Division has also taught me that it has a lot of PC options there for the tweaking and toggling. And that, probable secret special operative agent friends, is what we’ll be having a look at today. Plus a bit of chat about controls, UI customisation, and performance.

Here’s what faces you in terms of toggles, sliders, and yes/no options when you make your way to the graphics options. 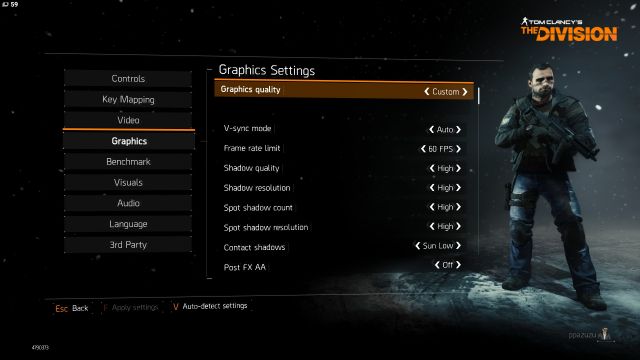 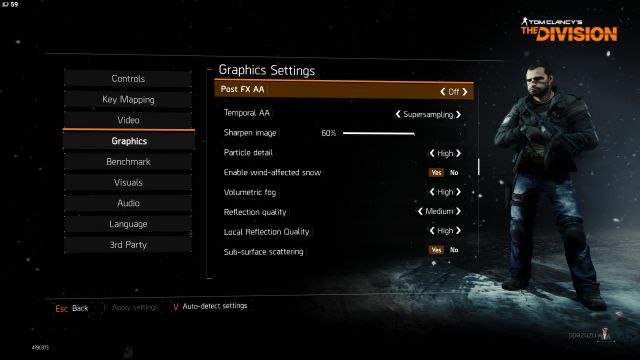 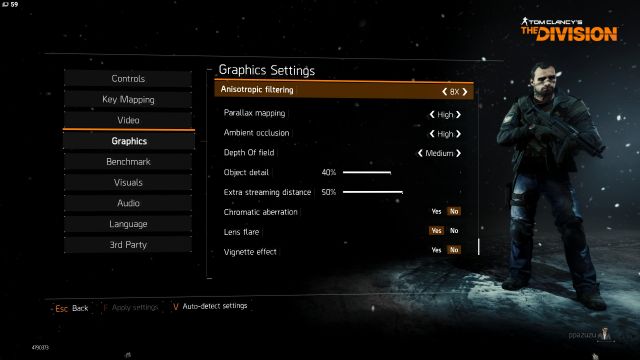 Slightly daunting stuff if you’re not used to some of this terminology. I mean, “sub-surface scattering” sounds like some kind of brutal toilet incident.

Helpfully, The Division will give you a little blurb about each option if you hover over it long enough. There’s nothing to indicate performance impact though, so your best bet for figuring that stuff out (beyond your own level of knowledge) is probably Nvidia’s own guide. It goes in-depth on each individual feature in a way that’s beyond the scope of this piece.

The particular selections you see in the above images are a custom set based closely on the default ‘High’ options.

Speaking of defaults, let’s have a look at some benchmarks run on The Division’s own in-game tool. It seems fairly reasonable for representing proper in-game conditions, doing a slow pan down a cluttered New York street, taking a turn through some particle-dense smoke and snow, and hanging around for a brief firefight in front of a police station.

I ran these at the Low, High and Ultra defaults with v-sync and frame-caps both off. My resolution was at 1080p throughout. 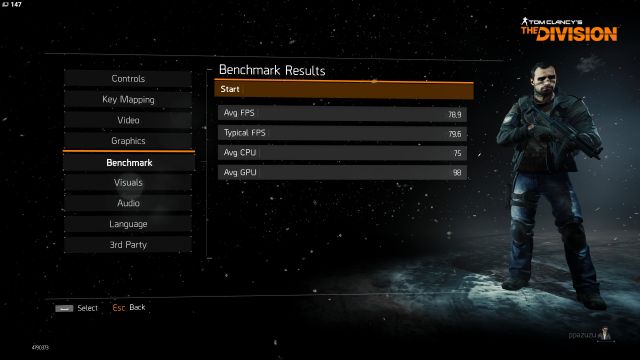 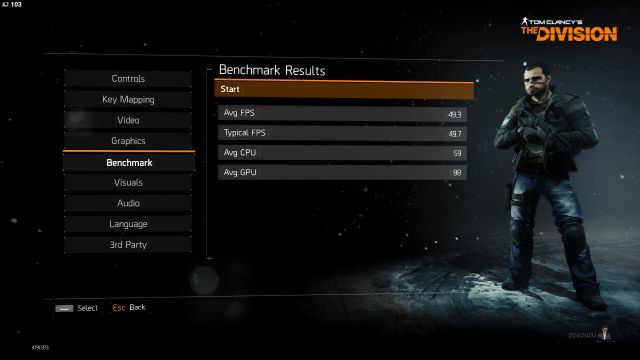 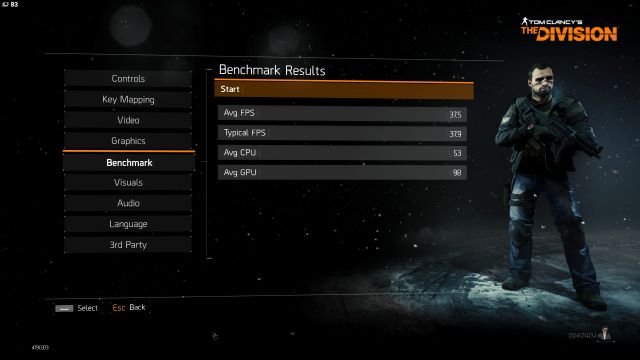 It’s worth noting that even ‘Ultra’ doesn’t turn everything up its maximum possible state. The Nvidia Gameworks stuff (HBAO+ and fancy shadows) has to be manually switched on, and I noticed a couple of other settings like Reflections which didn’t fully ramp up. I’ve also got no idea why Low is recorded as using more of my CPU power on average than the more demanding pair of settings.

As you can tell from those benchmarks, though, there’s a decent spread of results between Low and Ultra. Assuming you have a PC which falls somewhere within the recommended specs for The Division, spending some time fiddling around with the plentiful graphics options should allow you to find your sweet spot; whether that’s sacrificing image quality in a quest for 60fps, or locking at 30 to enjoy all the pretties. No way to change the Field of View though, so players will have to live with the default chosen by Massive and Ubisoft. 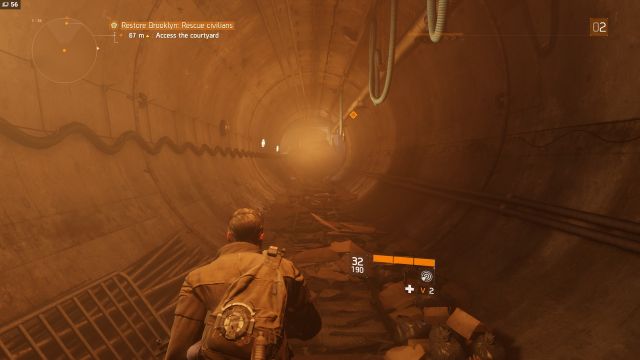 Which can get kind of narrow when you’re running in some inevitable sewers.

In-game benchmarks are all very well, but they’re not always indicative of actual minute-to-minute performance. For The Division though, the benchmark actually does seem to be accurate. I found the in-game frame-rates to be pretty close (maybe even a little better), and a similar level of performance to the beta period. Running with my High-with-a-couple-of-settings-toned-down (volumetric fog and some shadow stuff, I believe), the frame-rate was regularly in the upper 50s or outright sat on my elected cap of 60. Worst cases (running around at night with a lot of snow and a fight going on) would dip it to the lower 40s. That was the case both in the Brooklyn tutorial area, and Manhattan proper.

About what I’d expect at 1080p with an R9 380X. One early benchmark had this card out slightly ahead of a 970 at that resolution, which (while quite funny) I presume was a bit of an outlier. What I’ve seen appears to be more in-line with usual performance.

In case you’re still itching to mess around with sliders after all the graphics stuff, the control options have plenty of things to play with too. 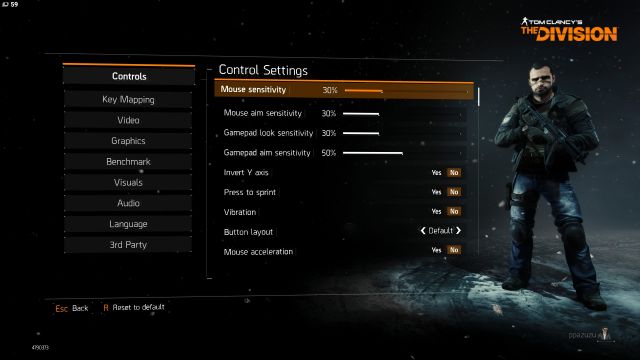 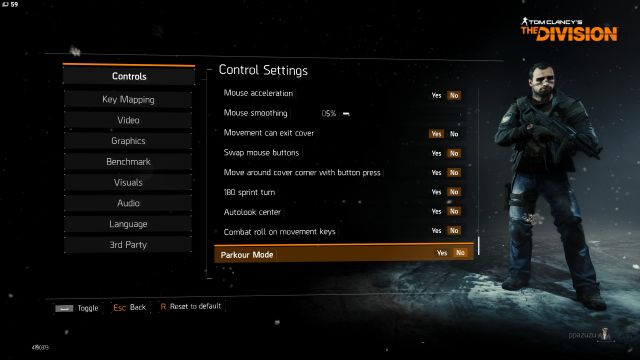 For the most part I’ve found the mouse and keyboard defaults to be fine (I did change ‘vaulting over stuff’ from Alt to Ctrl, but that’s about it). Anybody who doesn’t, though, has quite a few sensitivity, smoothing, and acceleration widgets to tune up. Keys can also be fully rebound at the player’s discretion. So that’s all quite customisable.

The control options have a few handy quality-of-life preferences too, like ‘do you want to auto-parkour over stuff?’ and ‘would you prefer moving around cover with a button-press, rather than contextual movement?’ Welcome stuff, in the main.

But wait, there’s even more stuff to toggle before you can finally settle in to playing the game. Visual and HUD-related things. 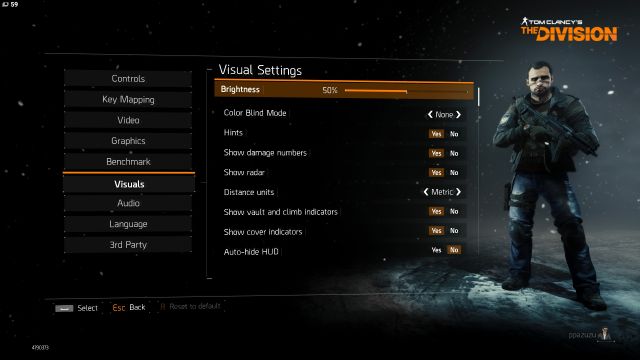 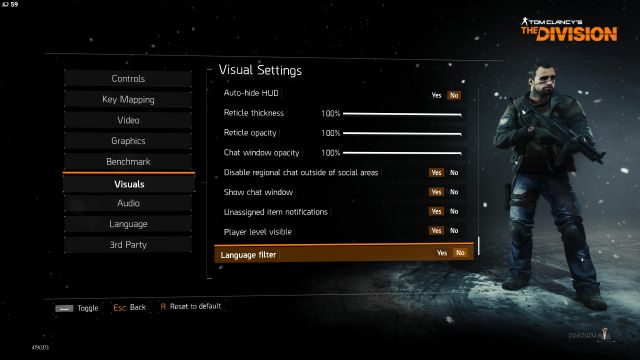 Again, some pretty nice preferential options in here. You can decide how minimal you want your HUD and various contextual indicators to be, as well as a Colour Blind mode (always good to have that accounted for), and the opportunity to decide how much in-game chat you see. The console-esque radial menus for grenades and quick-use items can’t be altered, but there are hotkeys for all of these things. Using mouse and keyboard to navigate through character inventory and skill menus isn’t too troubling, either.

It is worth noting that The Division has had some launch problems with servers. I’ve not really experienced this myself across the last few hours (except for having to sit in a ‘queue’ for about 40 seconds between Brooklyn and Manhattan), but this doesn’t invalidate the complaints of those who have been affected. Those server issues will obviously need to be addressed, and will most likely diminish the further we get away from release day.

In a surprise twist, it turns out this game is actually Theme Park.

In terms of the sheer density of technical options, however, The Division has pretty much embraced PC flexibility and scaling wholesale. The range of customisation in graphics, HUD visuals and controls is way ahead of Ubisoft’s usual efforts with Assassin’s Creed or Far Cry. I’ve read about some flickering problems with AMD cards in Crossfire (though the ball may be in AMD’s court for that particular issue), and the lack of any control over the default FOV could cause some annoyance, but beyond that there’s very little to nitpick. Overall performance has been equivalent to what I’d reasonably expect from my set-up, so while that’s only a sample size of one machine, it seems promising too.

There’ll be further coverage of The Division on PC Invasion once I’ve spent a lot more time with it; but the extensive customisation, alongside pretty solid performance, make this a commendable PC version.