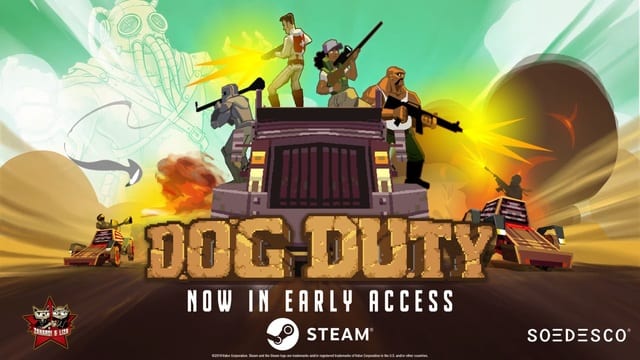 Commandos was an amazing real-time tactics series, and it’s sad that it went to IP limbo. I look forward to Kalypso Media’s revival of the franchise, but until then, I just might make do with Dog Duty, which premiered on Steam Early Access yesterday. Developed by Brazilian indie studio Zanardi&Liza, it openly salutes Commandos as one of its influences, but the art style and the frenzied shooting action do remind me of Team Fortress 2. According to the developers, another direct influence is G.I. Joe, which you can see in the voice acting and cutscenes.

Dog Duty will put you in the role of commander over a squad of three characters as they wreak havoc, destroying military facilities and taking down enemies who wear octopus-like armor. You’ll be able to ride freely through the world, fighting on top of moving vehicles such as armored cars or boats. Your mission is to destroy the octo-tank located in the desert; the octo-plane, last seen at a river area; and the octo-jumper, found in a swamp area. When you destroy one of these outposts, it affects the other outposts, cutting off weapons, armor, and other supplies.


The premise sounds a bit too simplistic and silly, but the vehicular combat does look like great fun. It doesn’t look like you have the excellent stealth you had in Commandos; instead, Dog Duty seems more action-oriented. In that sense, it probably plays more like a single-player, top-down Team Fortress 2, but the tactical component where you cut off supplies to other outposts could be interesting.

Dog Duty is out on Steam Early Access now, but the developer plans to release it this year.

What do you think of Dog Duty? Will it live up to its Commandos influence, or does it lack more tactical oomph? Leave your comments below!

Warhammer: Vermintide 2 – Winds of Magic review – Not quite the GOAT