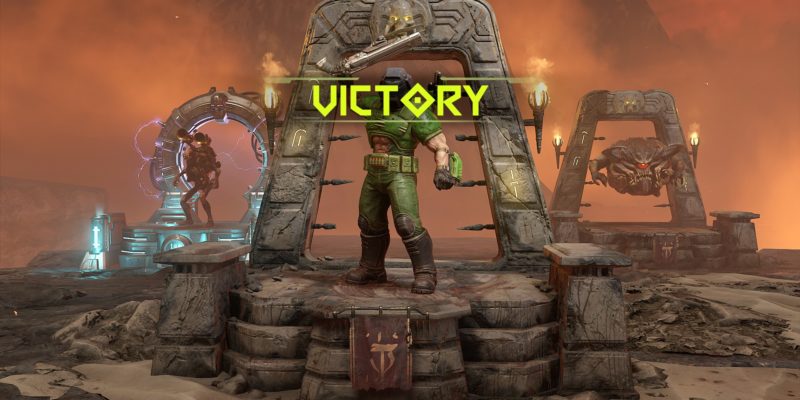 It’s still surprising to me that id Software decided to completely do away with standard multiplayer modes for Doom Eternal, but here we are. Battlemode definitely makes for an interesting game mode but I’m not sure if it makes for the replacement anyone may have been hoping for.

Doom 2016 was widely praised for very good reasons. It’s a speedy, furious action game with great levels and a ton of worthwhile action. But the usual team modes and deathmatch multiplayer content, still prevalent nowadays, didn’t grab a lot of people in the same way. To be fair, it was fine, but id clearly wanted to give players something more rooted in the franchise this time. And Battlemode accomplishes that, for better or worse.

Battlemode is still basically a deathmatch mode, but consisting of three players. Two players pick from a small selection of demons to play as, while the third is the slayer. The slayer plays very similarly to how he does in the campaign and has access to all of his weapons and their mods. The player-controlled demons each have demon-specific attacks and functions. For instance, Revenants use their jetpacks and shoulder-missiles, Pain Elementals fly around and can summon lost souls as shields or projectiles, and Marauders ruin Christmas for everyone with their shotguns and spectral wolves. 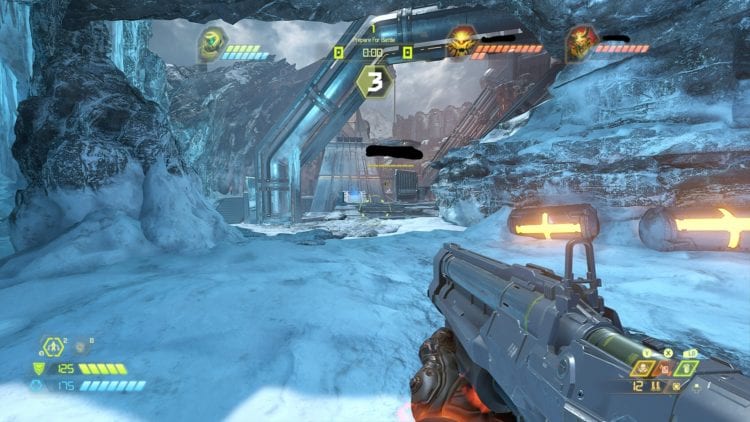 On top of the default moves, demons can also summon lesser demons to do their dirty work — an ability paired with a cooldown. Each player demon has access to two loadouts that vary between combat and support roles, too. They can place zones that heal each other or restrict the player, plus they offer buffs. These zones are placed directly on the ground and players need to be standing in them to be affected. That being said, the healing zones don’t heal very quickly, so they won’t be very useful if the player doesn’t use them properly. Plus they’ve got fairly long cooldowns.

If that sounds like it leans very, very heavily in the demons’ favor, there is an extra wrinkle. The summoned demons function exactly as enemies in the campaign do. Glory Killing demons grants the slayer a good amount of health, while using the Flame Belch on them causes them to drop armor. Additionally, the slayer has his chainsaw, which will grant ammo and killing a player-controlled demon nets extra goodies as well.

For all intents and purposes, the slayer player is playing the game just like they would during the campaign. They kill everything that moves. The demon players, however, have to come at it more like a hero shooter. You work with your teammate and use unique abilities to manipulate the actions of your enemy. Further reinforcing this is the way scoring works for both sides. Instead of following this dichotomy, the scoring system flips it around. The demon team gets points for simple deathmatch reasons and the slayer gets points for more specific ones. 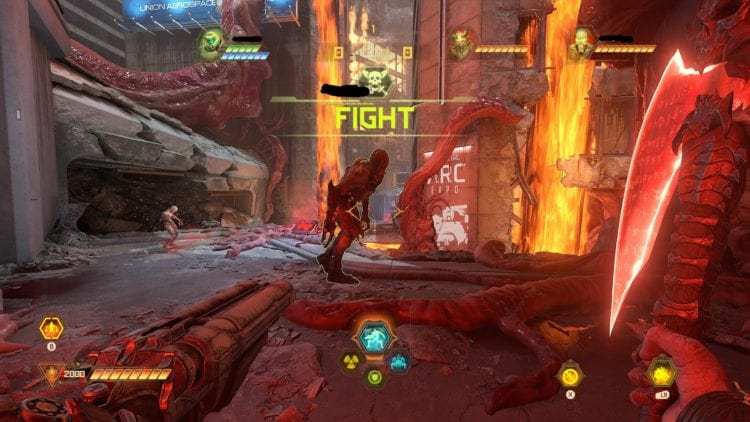 Playing as a Marauder is the most similar to playing as the slayer. He can air dash, attack quickly, and he instills an enormous sense of dread because of that one part in Nevkarol in the campaign. At least he doesn’t get his shield here.

All the demons have to do to get a point is kill the slayer. That’s it. No matter who kills him or when, the demon team gets a point. The slayer, on the other hand, needs to not only kill both demons, but they need to be dead at the same time because, upon death, they resurrect after 20 seconds. So, if the slayer kills one of the demons and can’t manage to kill the other one, the first demon will come back with half health and the slayer will have to kill them all over again.

If you haven’t played Battlemode, it’s easy to think that the demons are insanely fragile and can’t go toe-to-toe with the slayer, which would justify this system. But that isn’t necessarily the case. Demons can take a fair amount of damage, just like they can in the campaign. And the fact that the slayer must contend with two of them simultaneously can often make it feel quite literally like a 2vs1 deathmatch round.

But it all comes down to skill level, as it should. If the slayer is a better player than the two demons, the slayer will win. If one of the demons is a better player than the slayer, then chances are the demons will win. This leads to an issue that games typically try and avoid. One of the great things about multiplayer free-for-all deathmatches and team-based modes is that even lower-skilled players can join in and still have fun. Sure, they won’t make their way to the upper end of the leaderboards, but there’s still plenty of good times to go around due to the skilled players being able to counter each other. 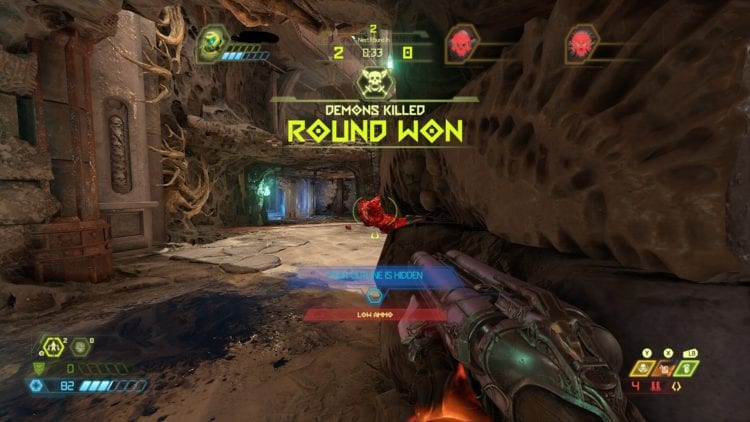 Nothing says satisfaction like the ruined meat of your demonic foes rotting in the distance.

If you’re unskilled and you go into Doom Eternal‘s Battlemode, you’re probably just going to lose no matter what. Make no mistake, this is a very demanding game type. Anyone that isn’t up to snuff is going to get destroyed quickly. There was a night-and-day difference between matches where I played as the slayer against demons below my skill level and those above it. Either way, it was a stomp. And it feels kind of iffy either way.

I find it likely that what the mode will be left with is just the sweatiest players and no one else. There doesn’t appear to be anything in the way of an Elo ranking system, but the servers have also been up for just a few days so anything could be added down the line. One thing that worries me is that, even if all three players are of the same skill level, the slayer will still be at a very major disadvantage.

To put it plainly, for it to be even, a single demon would need to provide ability equal to that of 0.5 slayers, with their different abilities and summoning capabilities both making up part of that. But, as of now, I simply don’t see how that’s the case, as they’re easily more capable than that. I’m sure it’ll get tweaked regularly, but I can see it becoming a giant turn-off for potential players. And less-skilled players will likely just end up avoiding Battlemode altogether. 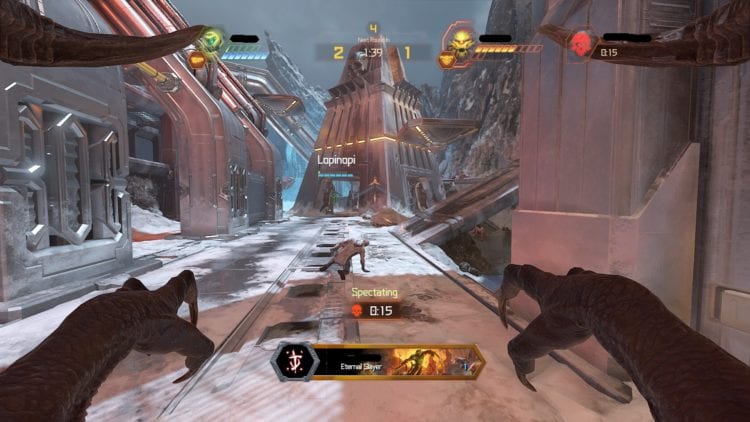 I like that the horns are there, too. How else would you know you were a Pain Elemental if there weren’t horns. Come to think of it, they just have one eye, right? Would that even look like this?

Even more problematic is that I’m just not sure a single 2vs1 mulitplayer mode is enough. Most games have a suite of different game types available for players; different modes, objectives, and rules. Some will undoubtedly very much love Doom Eternal for providing this multiplayer, but it’s certainly going to need a lot more to stay relevant. Of course, Doom 2016 had a large amount of multiplayer DLC, so there’s no reason to believe there won’t be more. One thing for certain is that Doom Eternal has a ton of potential for great multiplayer.

Give ’em what they want

The most obvious mode that’s ripe for inclusion is a co-op horde mode. Multiple slayers taking on hordes of demons together would be amazing. Imagine Killing Floor 2 but blended Doom Eternal and tell me that doesn’t sound like something you’d play the hell out of. I’m honestly not sure why Doom 2016 didn’t have this mode, but I hope it’s in the pipe now. I can’t see any reason why it shouldn’t be considered.

Aside from that, the groundwork is here for a hero-shooter esque mode, but with demons. Two teams of five competing to capture zones while utilizing the demon’s abilities could also be a great amount of fun. Especially because the demons themselves play very differently from the slayer and are generally a lot of fun to play as. It would also be great to take those playable demons into horde mode as well. The possibilities are definitely many. But it’s very possible id will let them fall to the wayside too, so I’m going to try not to get my hopes up. 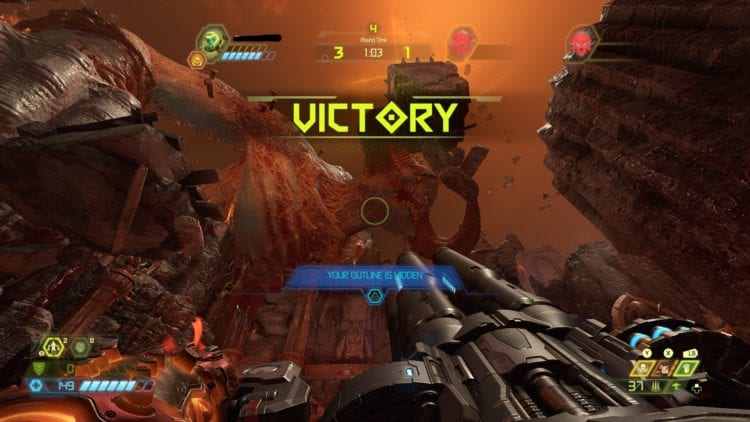 Battlemode has dead Ancestrals too, in case you were hoping you’d be able to see them across modes. And you probably were. They’re awesome.

Doom Eternal brought with it a stellar campaign, but I don’t enjoy the Battlemode multiplayer nearly as much. It’s good, but not everyone who digs the campaign is going to find a lot to keep them invested after a few hours. The mode is different enough to spark initial interest, but that alone isn’t enough for longevity. However, it might be able to land a substantial player base for the foreseeable future and I’m curious to see what, if any, changes are made to improve it.

Truth be told, at this point, I don’t even see myself spending much more time with Battlemode at all; it just isn’t for me, which is fine. But I love Doom Eternal and would very much like to see some future multiplayer modes that I enjoy as much as the campaign. In the meantime, the main game’s cheat codes are fun to mess around with.