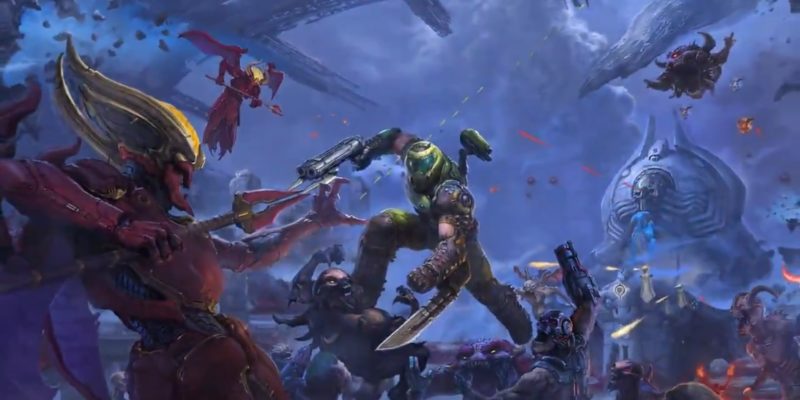 Bethesda and Id Software have fully revealed Doom Eternal‘s first DLC content. The Ancient Gods Part 1 is the beginning of a multi-part campaign add-on for the latest DOOM title. At Gamescom 2020, a gameplay trailer showed what we can expect at launch. The demo shows off environments similar to those seen in Eternal’s latter stages, meaning it could directly follow the events of the main campaign. Towards the end of the trailer, Id Software treats us all to a pair of Marauders that appear through portals. The Ancient Gods isn’t dialing down Doom Eternal’s difficulty then.

When the DLC was first revealed at Quakecon, we learned bits and pieces about the story behind it. There’s an imbalance of power in the heavens, following everything that the Doom Slayer destroyed in Eternal’s main campaign. The Slayer’s destruction may have saved humanity at the time, but of course, it came at a cost. Across the multi-part DLC, we should learn just what the hell we all caused during Eternal’s single player campaign.

Doom Eternal only launched back in March of this year, but it feels like a lifetime ago. Anyway, it was a damn good entry in the series, proving a brilliant follow-up to DOOM 2016. The core gunplay remained very similar, but Id Software managed to incorporate platforming mechanics and moments of down time in Eternal’s campaign. The environments were also a lot more varied than Doom 2016, as Eternal took us to Earth and back, destroying everything in our path. We hope that The Ancient Gods can continue with what Eternal started, mixing fantastic gunplay with solid first person platforming and gorgeous, varied environments.

Doom Eternal The Ancient Gods Part 1 launches October 20. At present, there’s no news on when part 2 will drop, but Bethesda did state that two DLCs will drop within a year of release.

Call of the Mountain patch notes breakdown for Legends of Runeterra