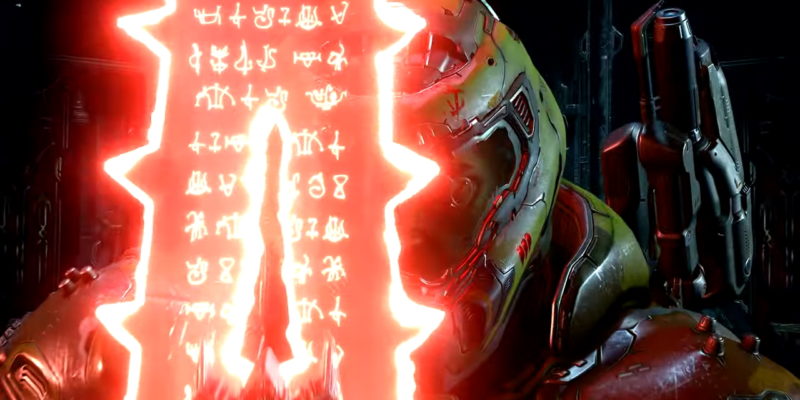 We’ve all been ready to see the damage the Doom Slayer can do with that big, glowing sword. The massive, demon-wrecking blade has been teased since June of last year. Today, finally, we can see it do some work in the official trailer 2 for Doom Eternal. Spoiler alert: it kills demons real good.

Sadly, we only get to witness the destruction for a few moments. The majority of the trailer consists of some story plot, as well as a bit of good-old-fashioned demon slaying. Glad to see our green boy still living up to the legacy. But what is shown is rather gruesome, indeed. The sword, created by the Crucible (that Doom 2016 McGuffin), is shown near the end. Our Doom Slayer uses it in what appears to be a finishing move against a cyberdemon, filleting it like a tender piece of meat. Violent, yes, but pretty great.

Let me tell you a tale, a tale of slaying

The official trailer 2 does offer more of a glimpse concerning the story of Doom Eternal. Earth is, of course, in dire straights. Massive, building-sized demons roam through destroyed cities. But, as predicted, the Doom Slayer is here to set things straight — with guns, naturally. The trailer also gives us a look at what appears to be the antagonist of the game. And here’s the surprise: it doesn’t look to be Samuel Hayden, who’s just kind of hanging around. As a surprise, we also get to see a bit more of the Doom Slayer without his helmet. It’s not a full-frontal shot of his face, but now we know what the back of his head looks like. He’s not bald, in case you’re wondering.

We also get a better look at the Maurader, who sports his own glowing, red weapon. This ax-wielding demon is given some fanfare in the trailer, hinting that he will have a major role to play indeed. His green armor is certainly suspicious, leading me to believe he was once part of the Doom Slayer’s clan.

We don’t have much longer to wait on these answers, luckily. Doom Eternal will slash onto the PC on March 20.