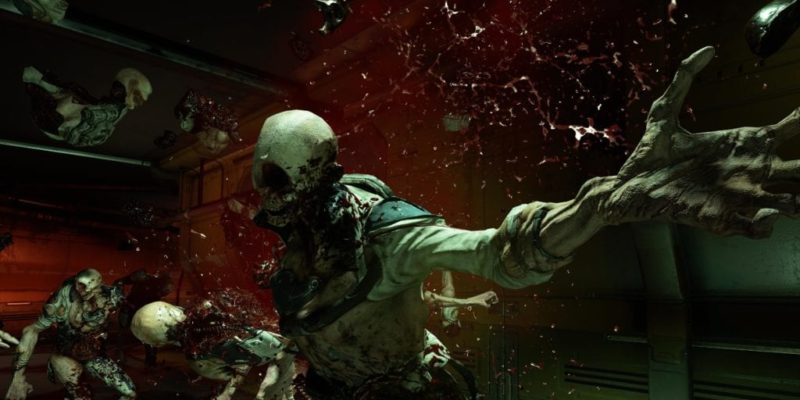 Well, that was mildly unexpected.

Over the weekend, Doom had a closed multiplayer beta running. Two game modes. Two maps. Much shooting. The “unexpected” part was that, despite having quite a lot of other games to play that you’d think would soak up my time, I actually clocked quite awhile in Doom. It is, it transpires, a bit bloody good.

Doom (or Doom 4: DOOM, if you prefer; and if Hitman 6: Hitman: Episode 1: Paris is any indication than I absolutely do) works by marrying together Call of Duty and Quake 3, in a rather successful way.

No, this isn’t the start of a sci-fi Call of Duty match.

The Call of Duty part stems from the Modern Warfare Act of 2007, which stipulates that the multiplayer segment of every first-person shooter has to have some sort of levelling-based progression system. It also comes from the fact that the pre-match lobbies look almost bloody identical to the way Call of Duty tends to lay things out.

This isn’t actually a huge thing – at least, not in the beta. Only a couple of weapons were locked off at the start, and they were unlocked after about an hour of play. Likewise, custom loadouts were handed to me after what I think was one game. 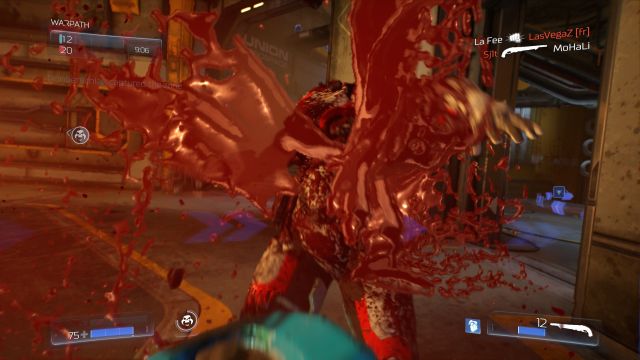 “Glorious” kills are triggered by meleeing someone when they’re below a certain health threshold. They are indeed glorious.

Yeah, loadouts: that’s another thing Doom has taken from the Modern Warfare Act. When you enter the arena, you enter with two weapons and a piece of equipment (a frag grenade or a personal teleporter, say), as well as a selection of four Hack Modules – temporary boosts that can be activated before you spawn in, which give you a little bonus. Some starting armour, or the ability to see the location of your killer through walls, say. They only last a short time and disappear forever once you use them… but you’ll probably earn a couple from every match, so that’s not a huge problem.

So it’s another slow-paced Call of Duty-esque shooter, then. Right? No. All of this Call of Duty framing is married with a balls-out, fast-paced, double-jumping, no-reloading shooter that reminds me a hell of a lot of Quake, Quake 3, and Unreal Tournament. 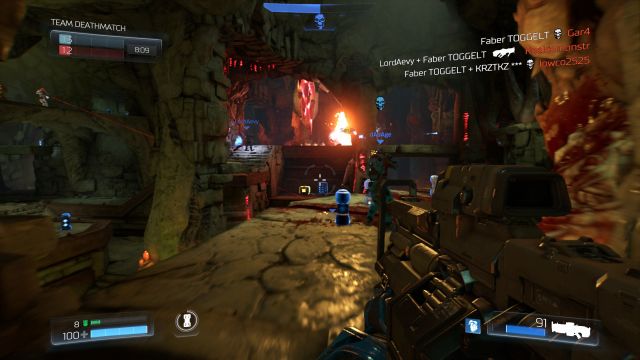 Just another day in murdery Explosionville.

Fights aren’t decided by jumping out from a corner, going prone, and landing a headshot. Fights are mostly decided by scrambling, circle-strafing, double-jumping, and – depending on your weapon – aiming blasts at where your target is going to be. It’s gloriously quick, and I’ve really, really missed this sort of thing.

The weapon selection is pretty on-point, too. If memory serves, this multiplayer test offered up seven weapons: Heavy Assault Rifle, Plasma Rifle, Rocket Launcher, Super Shotgun, Vortex Rifle, Lightning Gun, and Static Rifle, all of which have some variant of alt-fire. With some, the alt-fire is as simple as “looking through a scope”; with others, like the Lightning Gun, it actually changes the way the weapon works. With the Rocket Launcher, for instance, tapping alt-fire instantly detonates any rockets you have in the air – useful for hurting people who are part-way down a corridor or hiding behind a wall, if you’ve got the timing for it.

And the shotgun is fucking great. I confess, I thought the shotgun sounded a little wimpy in a previous Doom stream, but it’s very satisfying to murder somebody with it in multiplayer. 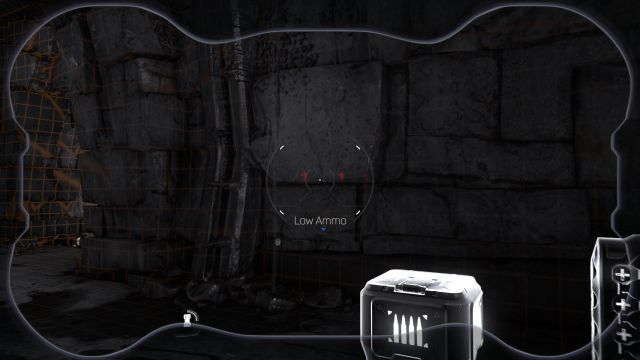 This particular delight lets you see – and shoot – through walls.

There are a few twists, mind you. Bigger and badder weapons (like the wallhacking Gauss Gun) appear around the arena every now and then. Perhaps more importantly, a Demon Rune will periodically spawn, and the game will announce this – and its location – to everyone. The first person to grab it turns into a demon; the only one available in this multiplayer test was the rocket-launching, jetpacking Revenant, but there will doubtless be more in the full version. This gives that player a massive advantage in terms of speed, health, and damage.

On death, they drop the Rune, and for the first five seconds only the team that killed the demon can pick it up. After that, it’s fair game for anyone. After a minute or two, the rune vanishes and all players are, once again, humans. 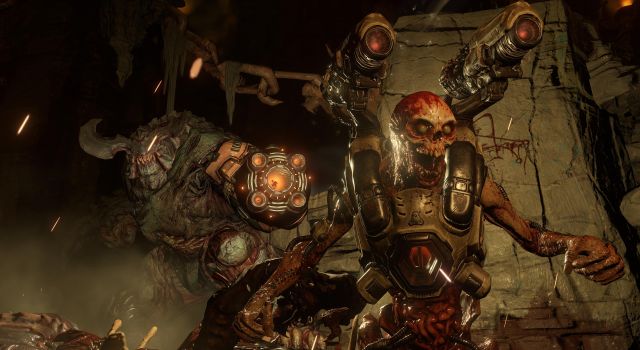 This is a Revenant. This isn’t a screenshot I took, but I felt the youngsters who missed Doom should probably know.

I can’t actually decide how I feel about this. On the one hand, it’s another little flashpoint for fights. On the other hand, it feels like a huge advantage for whichever team grabs it. While it’s a back-and-forth power-up, it’s also a complete pain if you’re dominating and then it massively shifts the game, or if you’re losing and then you’re suddenly even farther behind. I hope for game modes with no Demon Rune. Then again, maybe some of this is just down to the Revenant.

In this test, levelling up unlocked a few extra weapons and loadout slots, though nothing hugely game-changing. It also gave you a random smattering of Hack Modules and customisation parts; different bits of armour, or a new pattern, or a new type of colour to apply. There are also a load of taunts that can be used, one of which – excellently – appears to be the Carlton Dance from The Fresh Prince of Bel-Air. Good luck finding a time to use these without getting murdered, though. In a game where rockets are faster and people are faster, standing still is a death wish. 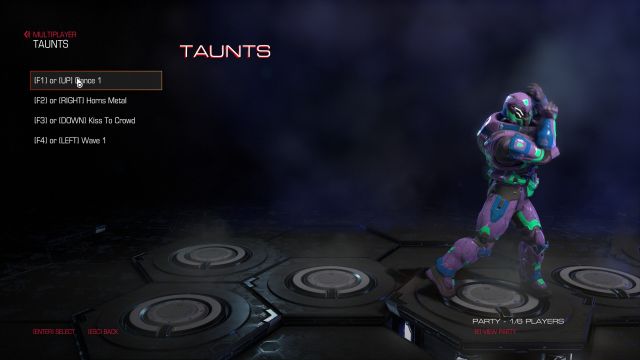 And yet, obviously, I’m going to use it every goddamn time I can.

The two maps and game modes in the beta highlight this pretty well. Infernal is a hellish landscape centred around a bridge above a pit of fiery death, while Heatwave is a military outpost or smelting facility of some sort.

“Verticality” is a word that’s been thrown around a lot in shooters lately, but it’s also one that tends to mean “wall-running” or “a bit of double-jumping”; in Doom, it means that there are pits, pillars, and ledges everywhere. It’s rare to find a battle taking place on a horizontal plane. More often than not everyone is at different elevations, and constantly changing those elevations and their positions. Very, very quickly. 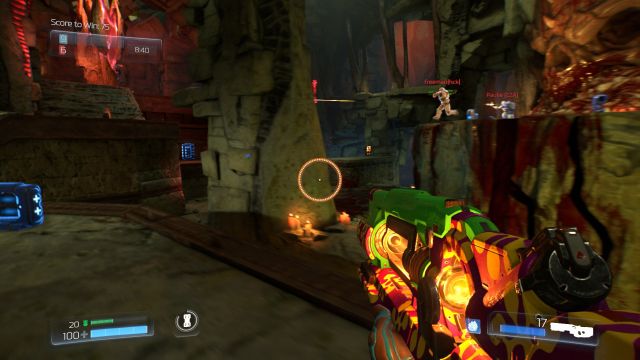 The Static Rifle actually charges up and becomes more powerful as you move, which pretty much exemplifies the whole “don’t stand still” thing.

The modes on offer were Team Deathmatch, which I suspect you already understand quite well, and Warpath, which is a bit of an oddity. It plays somewhat like King of the Hill, in that you need to capture and hold a zone to score points… but the zone is constantly, gradually moving around the map, so there’s no “setting up a defensive position” within that zone. It’s mobile, and you need to stay mobile with it. Whether or not you cluster your entire team in the zone or if you just leave one person in there while the rest hang around the outskirts to pick off approaching enemies… well, that’s up to you.

While I very much enjoyed my time with Doom, leaping around maps like a speed-crazed rabbit and blasting people with a rocket launcher that has more than three shots and reloads in the space of a second, there are a few things that bugged me, and they’re largely tied to the HUD. I’m not going to complain about my inability to get a ping lower than 150 because I suspect that was either down to all the servers being in America, or this being a stress test. 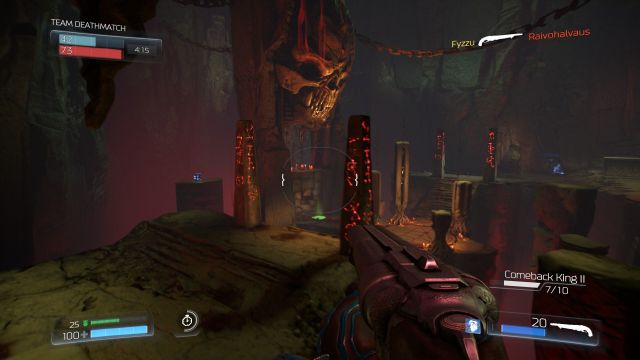 A bridge too far.

First problem is that the game doesn’t do a great job of indicating when you’re about to die. It does do the “screen turns red” thing, but as the main colour for the entire game is red, and as it only seems to do this at really low health, that’s not instantly helpful. Secondly, the indicators for where damage is coming from all appear at the bottom of the screen, which is incredibly confusing when you’re seeing them from the corner of your eye. I don’t think I’m alone in this, either, because I killed a few people by chasing them down with a shotgun, blasting them three or four times, without them working out where I was.

I’m not going to talk about options because there weren’t many in the beta, and I’m assuming that was to keep the download size down. If those were all the graphical options, I’ll be greatly displeased when the game launches. Also, an FOV slider would be nice.

If these minor little blips are ironed out, though, I think I could get to like Doom. It has levels and progression, yes, but they largely seem tied to customisation rather than anything else. I miss rocket-jumping, but otherwise, Doom‘s multiplayer feels very much like a classic fast-paced, skill-based shooter. Being that it’s tied to a major release, this return to shooting’s roots might actually have some legs.

By Robert Workman5 days ago
Previews

By Robert Workman5 days ago
Previews

By Tim McDonald6 days ago0
Previews