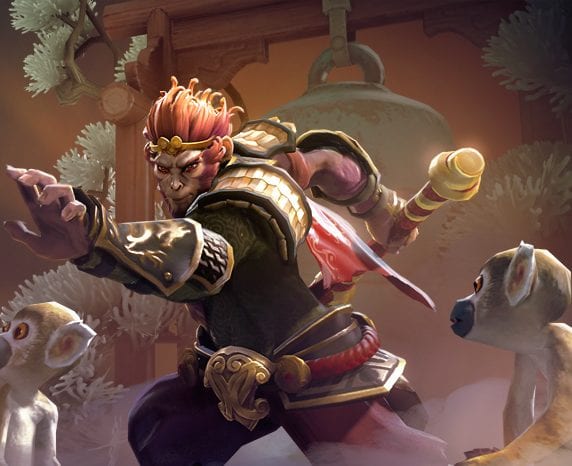 Dota 2 7.00’s patch notes have been revealed and… yes, they change everything.

In fairness, I say this about all of the patches – and hey, it’s true! – but this one offers perhaps the biggest changes yet. Let’s take a look at the marquee features first.

First off: Sun Wukong, the Monkey King, has leaped into the fray, and he looks a bit like Combat Earthshaker. Boundless Strike looks like Fissure only without the giant wall of earth, instead critting and stunning enemies in a line. Tree Dance lets him leap onto a nearby tree, and can be followed by Primal Spring, in which he leaps off a tree and slows and damages enemies within an AoE based on how long he channeled. Jingu Mastery charges his weapon and grants bonus damage and lifesteal for a limited number of attacks. Mischief is “an innate power” which makes Monkey King look like an object based on whatever’s nearby – so be careful, because that tree might not be a tree, and that Double Damage rune might not be a Double Damage rune. Finally, Wukong’s Command summons a slew of monkey soldiers to join him in battle, attacking enemies that walk near them.

Without actually playing him, I’m not quite sure what to say: I’m curious as to exactly how Mischief works, and how Tree Dance impacts vision, and so on. If I do a full analysis of the changes, though, that won’t be in this news item.

Next up, the entire HUD has been redesigned to offer a bit more vision. The top bar and hero bar are smaller, you can click just once to level up an ability, a “unit query” tab lets you look at other units without selecting away from your own, and items now display their mana cost. Not only that, but there are “dynamic HUD elements” for “custom interface designs”: the example given offers up a slider for Morphling, letting you choose how much you want him to switch between Strength and Agility. Don’t worry, though, as Legacy options are available for a few of these (the unit query panel, notably) and Legacy skins can still be equipped with the new HUD.

There’s a new shop view, stock of items is now displayed without you having to mouse-over it, and courier controls have been adjusted. For one thing, you don’t have to open the shop to buy a Flying Courier. For another, you can right-click the Courier’s menu to choose where you want to send it – useful, if you’ve just stolen it from your offlaner without saying a damn thing.

And then there’s the new pre-game stuff. Now you have both the Pick Phase and the Strategy Phase, and the game itself will be loading in the background while these go on. Pick is what you’d expect: you pick your heroes. You can, however, filter them, see a “team composition” window that indicates what you have and what you lack (assuming the game actually understands this stuff, which is unlikely considering the ever-changing meta), and ALT-click heroes to suggest them to your team.

When that’s done, you get 30 seconds for the Strategy Phase. This lets you set up lane assignments, indicate where to put wards, and – excellently – buy your starting items. As soon as the game loads in, you’ll be ready to go without needing to buy all of your stuff. You can also use this to predict enemy lane assignments, if you fancy.

And then there’s everything else. And by “everything else” I mean “holy shit, they’ve changed so many heroes, and what is this stuff”.

First! Heroes now have Talents. At levels 10/15/20/25, you can pick one of two options for each hero, which will give them some rather lovely buffs. At level 20, for instance, our dear Crystal Maiden can opt for a bonus 120 gold every minute, or a 35s lower respawn timer. At level 25, Wraith King can have Vampiric Aura’s lifesteal increase by 20%, or he can choose to have Reincarnation cost no mana. Jakiro can get a bonus XP gain at level 10, or opt for 8% greater spell damage. Etc. Every single hero has a talent tree, and they’re all different.

Ultimate levels are now at 6/12/18 instead of 6/11/16, but it’ll take the same amount of XP to hit those levels. Respawn timetables have been reworked, the gold bounty has changed, the death cost has been reworked, hero kill XP has changed, AoE gold per hero has changed… etc. Maths, basically.

All heroes now have a Backpack, letting them store an additional three items that they can swap to. These items can’t be activated and offer no bonuses, but they can be used to complete recipes, and you can swap items from your Backpack to your active inventory – although they’ll remain inactive for six seconds. And no, you can’t put a Gem or a Rapier or an Aegis or a Bloodstone in your Backpack. Nice try, though.

You may have noticed I said “river Rune.” Now, only power up runes (Haste, Double Damage, etc.) spawn in the river, with Bounty Runes spawning in “each of the four jungles” every two minutes. Bounty Runes only replenish two charges of a Bottle, and only one power up rune will spawn in the river every two minutes – but not at the start of the game. So yes, mids will once again need to pay attention to where the power up rune has spawned.

Oh, and there’s a new building: the Shrine. There’s one near each team’s Secret Shop and the new Ancient Camp locations (we’ll get to that), plus five inside the base. They can be TPed to, and the external Shrines become vulnerable when all of that team’s Tier 2 towers fall. These have a five-minute cooldown and, on activation, generate an aura that provides HP and Mana regeneration.

Screwing with your armour, and… apparently floating while they do so? Um.

Yes, new Ancient Camps. The entirety of the jungle has been reworked – “both primary and secondary”, so I’m guessing that means “both the jungle and that bit with the one camp near the Secret Shop” – with new paths and new camps. The primary jungle has 1 Ancient camp, 2 hard camps, 2 medium camps, and 1 small camp; the secondary jungle has 1 Ancient camp, 1 hard camp, and 1 medium camp. Not only that, but there’s a new Ancient type – the Prowler – with a lifesteal aura, a root, and an AoE spell that reduces armour by 50%. Also! Neutrals now spawn every two minutes instead of every one minute. Also! Ward spots and juke paths have been reworked, particularly regarding the hiding spots in the left and right lanes, and near the map edges between the T1 and T2 towers.

There are also lots of other little changes – T4 towers regen like the Ancient, and TP scrolls don’t destroy trees, etc – but seriously, I’m not covering all of that.

Next up, the “fuck illusions” part of the patch. Illusions now give gold and XP, although it’s a fairly minimal amount in terms of being 5+level, and illusions deal less damage to buildings. Also, illusions no longer get truesight if the illusion creator is carrying a gem, and Radiance damage on illusions has decreased from 50 to 40. I’m… assuming that’s “the damage dealt by illusions carrying Radiance” rather than “the damage dealt to illusions by Radiance”, but I’m not entirely sure.

Okay, more general stuff. Cleave is now a cone. Root now prevents lots of movement spells like Burrow Strike and Ball Lightning. Dispel has been standardised, insofar as ability tooltips note if an ability is Undispellable, Dispellable, or Strong Dispellable, with dispel abilities stating whether they do Basic Dispel or Strong Dispel. Max movement speed is now 550 instead of 522. Regen items (Bottle, Urn, Salve etc.) are now only disabled if damage is actually taken, and if that damage comes from either a player or Roshan (so, Blink Dagger rules). Crimson Guard now affects buildings. Diffusal Blade can no longer self-target, so Riki can’t purge Dust endlessly. Drum of Endurance, Helm of the Dominator, Mask of Madness, Rod of Atos, and Satanic have been reworked.

Then there are all the hero changes, which I’m absolutely not going to list because I’m not insane, but I might do a full analysis tomorrow if I lose some more sanity overnight. Quickly, though: Arc Warden and Underlord have been added to Captain’s Mode. Anti-Mage, Bounty Hunter, Chaos Knight, Phantom Lancer, Riki, Slark, and Sniper now have Scepter upgrades. Crystal Maiden, Shadow Shaman, Skywrath Mage, and Zeus have reworked Scepters. Lycan, Necrophos, Techies, and Treant Protector have received hero reworks, and have all been removed from Captain’s Mode as a result. Visage isn’t listed as a full rework, but he’s had some seriously heavy changes too, with regards to Gravekeeper’s Cloak and Familiars.

So, lots of stuff. Monkey King is new, plus four hero reworks, plus a redesigned map, plus a bunch of other shit. Go look at the changes for yourself over here and go “They’ve done what” a lot, just like I did. (Especially at Slark and Riki’s Scepter upgrades. Seriously, what?)

The 7.00 patch – titled The New Journey – is live on the Dota 2 Test Client now, and will hit the main client tomorrow, on 12 December.