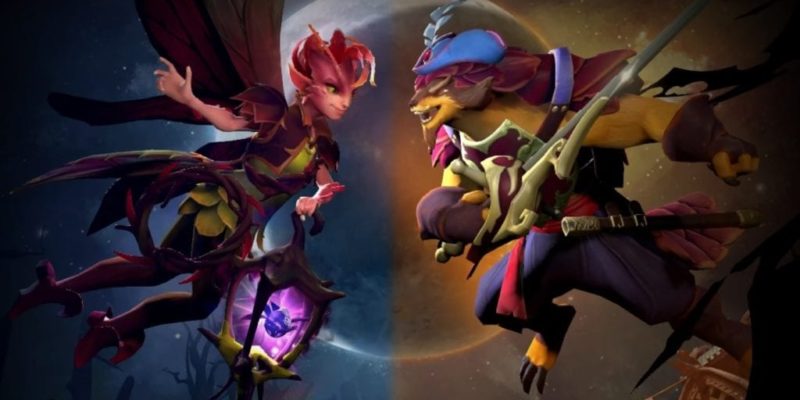 Aaaaargh. There’s a new Dota 2 patch out on 1 November. It changes everything, because it’s a Dota 2 patch.

Titled Dueling Fates and numbered 7.07, this Dota 2 patch adds the swashbuckling Pangolier and the fae Dark Willow (no relation to Buffy). It also reworks the MMR system into seasons. And adds a Turbo game mode and a ping wheel. And reworks six other heroes. And adjusts lanes to prioritise safelane over mid, makes offlaning more dangerous, reworks armour, adds bonuses to heroes of each attribute, makes neutral creeps sleep at night, removed all remaining Unique Attack Modifiers, put cliffing back in, made the flying courier a free and automatic upgrade, removed Iron Talon and Poor Man’s Shield, added five new items, changed the talent tree for every single hero, lets Pudge hook runes…

I honestly do not have the energy or sanity to detail every single change, so I’m not going to. Let’s do what we can, though.

First off, Pangolier, the dashing melee swashbuckler. His Q lets him dash to a new location and then attack with rapid sword thrusts in a chosen direction. His W has him leap into the air and then smash back into the ground, damaging enemy heroes around him and granting him damage mitigation depending on how many heroes he hits. His E gives his attacks a change to slow the target and completely negate their armour after a short delay. Finally, his ultimate has him curl up into a magic-immune ball and roll around, damaging and stunning any enemies he hits. Not only that, but using his W while in this form lets him leap over obstacles.

As someone who grew up in a rural area (with local magical car crash faeries), regular brambles are bad enough when trying to move through an area. Cursed faerie brambles? Nnnnnope.

Pretty cool, but let’s have a look at Dark Willow, the fae with a pet wisp. Her Q creates an area full of brambles which damage and root any enemy hero that comes into contact with them. Her W has her fade into the shadow realm, becoming untargetable and gaining bonus magic damage for her next attack the longer she stays in there. Her E bestows a cursed crown on a targeted enemy; after four seconds, that enemy and all nearby enemies are stunned. And then… well, her remaining abilities both seem to be ultimates. Bedlam has her wisp circle her, damaging nearby enemies, while Terrorise has the wisp smash into a large AoE and cause enemies to run towards their home fountain. However, Terrorise can’t be used while Bedlam is active. Dark Willow only has one wisp companion, after all.

The ping wheel is something I’ve been clamouring for, for awhile; this is something most other MOBAs have, letting you ping in different ways. From what I can gather you’ll be able to ping out ward spots, or “I’m going here”, or whatever – as well as attack and defend instructions. Turbo Mode is also a neat addition: it weakens towers, increases the passive gold and xp gain of heroes, lets you buy items anywhere, and lowers respawn timers. Essentially, faster and more casual games that should be decent for a quick match or for introducing newer players to the basics.

The five new items are Meteor Hammer, Aeon Disk, Spirit Vessel, Nullifier, and Kaya. Meteor Hammer costs 2625 gold and offers up strength, intelligence, and some HP and mana regen. Its active is a three-second channel that summons a meteor which hits an AoE, destroys trees, and stuns and damages enemies in the zone of impact, while also adding a debuff that deals damage over time. Aeon Disk is a 3750 gold item which offers up some health and mana as well as a 25% bonus to the new Status Resistance, which reduces the duration of status effects like silence and stun. This has a passive ability which, on taken damage from another player when below 80% health, applies a strong dispel to your hero and gives you a 2.5 second buff which reduces all incoming and outgoing damage to zero. Quite neat for those who’re getting picked off too early, but I can see this making certain heroes an absolute nightmare to gank. On the other hand, it’s probably not worth prioritising over a fair few other items, so there’s a trade-off there.

Spirit Vessel is an Urn of Shadows upgrade which does the usual Urn of Shadows stuff, but adds bonus effects. On an enemy, it reduces their HP regen and heals by 70% and drains 3% of their current HP every second. On allies, it boosts HP regen and heals by 20%, and increases their HP by 1% of their current HP per second. Nullifer is a 4700 gold item offering damage, armor, and HP regen; this has an active that dispels and mutes a target for 5 seconds, and applies a 100% slow to the target for 0.4 seconds every time they’re attacked. Kind of like a pocket Cold Snap, I guess, only slowing rather than stunning. Finally, Kaya is a 1950 gold item that proffers up intelligence, 10% spell amplification, and +10% mana cost and mana loss reduction.

Oh, right, and there’s also a bundle on sale offering up wards and couriers and taunts and also some cosmetics for Pangolier and Dark Willow which change up their ability animations. Because hats.

Right, the reworked heroes: Beastmaster, Broodmother, Morphling, Tiny, Viper, and Wraith King. I’m not going over all of these, but Broodmother no longer has invisibility stuff… but also keeps her free pathing and speed boost on webs even when she’s taking damage. (She also has inverse kinematics so she actually climbs along cliffs and things when free pathing on webs, which is supremely creepy). Morphling’s ultimate now lets him turn into an enemy hero, copying their base stats and abilities, while Attribute Shifting costs zero mana. Viper is irritating in all new and interesting ways, but is arguably less irritating than before, and I fully expect to eat those words when the new Nethertoxin AoE is used against me. Wraith King can summon skellingtons and has basically become a tanky Xul from Heroes of the Storm. Tiny can now rip trees out of the ground and hit people with them, and has talents that let him use Toss without a target, lobbing people out of fights or – presumably – cliffing them. Ye gods.

And finally, let’s quickly look at some of the other changes. A lot of the talents are now focused on individual abilities rather than general upgrades; at level 15 Gyrocopter can opt between extra Flak Cannon attacks or rocket Barrage Damage. Riki has a level 25 talent that means he doesn’t break invisibility ever, so you need Truesight to see him even when he’s hitting you. Io has a talent that causes him/her/it to attack every time his/her/its tethered ally attacks, which – combined with a +60 damage talent, an item like Desolator or Crystalis, and an attack speed hero like Alchemist – brings ganks to a whole new level of horror. And moving away from talents, Windranger can move while shooting when using Focus Fire, and Vengeful Spirit’s aura no longer leaves a debuff on her killer… but if a friendly hero dies while under the effects of it, an untargetable illusion of them is summoned to strike back at the attacker for 7 seconds, dealing 100% of that hero’s damage. Kill the Vengeful Spirit first (unless she buys an Aeon Disk). If you want to go “Wait, what the fuck” a lot, just check out the new level 25 talents.

Right. If you want to read the full notes for Dota 2 7.07, or Dueling Fates, or whatever you want to call it – apparently coming on 1 November – you can do so over on the official page. As ever, I’d recommend it, because there’s plenty of amazing stuff I haven’t mentioned and doubtless some stuff I’ve completely missed. It looks like the emphasis on this patch – especially in some of the more-impactful-but-less-interesting numbers changes, like the way deny XP works – is to once again get us back to having a safelaner with a support, rather than a dual-lane mid, and to emphasise the importance of the safelane. As for the rest, who knows? I’m sure there’ll be some horrifically broken combinations that we’ll discover in the coming days. Either way, Dota 2 is completely different. Again.