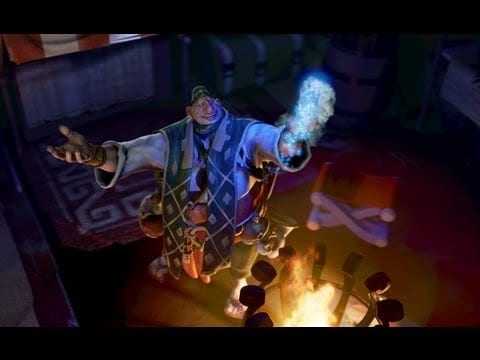 This picture is totally relevant because it’s Dota 2 related, and it’s not just me showing off the lovely Sven sword I have.

A Dota 2 patch that went live tonight has come with the announcement that, at last, Dota 2 is really free for everyone.

If you’re banging your head on the wall and screaming “IT’S BEEN FREE-TO-PLAY AND OPEN TO THE PUBLIC FOR AAAAGES” then I would first advise you to calm down and have a cup of tea, and secondly, while it was indeed open to the public, you still had to sign up and wait for your account to be activated before you could play. This is no longer the case: anyone can jump right in by toddling over to its Steam page and downloading the client. Assuming Valve aren’t lying liars, anyway.

Valve are apparently now satisfied that they have the server grunt to cope with an influx of eleventy zillion players, and with the “enhancements to the new user experience” they apparently think that those eleventy zillion won’t be put off by weeping screams of STOP FEEDING NOOB REPORT DROW. I’m not quite sure whether those enhancements are responsible for the “Invite to Trade” button currently sending a recruitment invite, but oh well.

Speaking of which, this opening of the game ties in quite nicely with the Recruitment bonuses that were recently added. You can claim to have recruited someone to the game and – if they agree that you’re responsible for their presence in the game – you’ll gain Recruitment Experience whenever their profile levels up, and until they hit profile level 10 you’ll both earn a 50% bonus to battle points when playing together. You can only be recruited by one person, though. On that note: dear everyone, please stop sending me recruitment invites. Love, Tim.

In short, if you haven’t tried Dota 2 yet, now’s your chance. It’s daunting, dizzying, terrifying, and really, really good. The IncGamers Dota 2 guild is still going reasonably strong, and we’re looking to expand with regular coaching sessions sometime in the new year, so if you fancy giving it a go then get it downloaded, fire up the newbie guides, and maybe even join us in game sometime.

For posterity’s sake, here’s the lovely cinematic trailer from when Dota 2 made its debut at Gamescom.

Banished expected in January for around $20