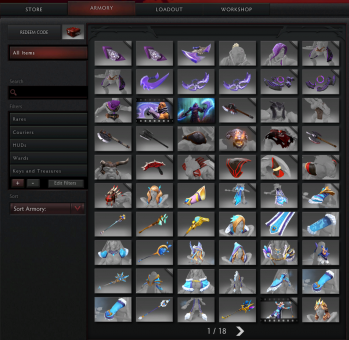 If you like your Dota 2 hats, then important news: the drop system has been reworked.

As a fair few people have predicted (what with the way the drop list has gradually been getting smaller), Valve have changed the way that Dota 2‘s drop system works. Over to you, Person Writing The Patch Notes!

“The current item drop system doesn’t function well as a reward mechanism. It drops many items on players who aren’t interested in them (the items are extremely common, or they’re for a hero the player doesn’t play), and in the process dilutes the value of the items. We’d like to get to a place where dramatically fewer uninteresting items enter the economy. We don’t have a complete solution yet, so we’re going to move forward step by step, taking feedback from you as we go.”

Sounds good to me, although I’m going to miss getting 17 sets of Common bracers for Spirit Breaker. Oh wait no.

So: instead of being level based, the drops are now time based, and the drop list now offers full sets, treasure chests, bundles, and Arcanas at a rare rate instead of frequently dropping Common items. As a result of this, Battle Boosters have now been completely removed from the game; anyone who had one active will get a free Treasure of the Rotted Gallows (the new chest), and anyone who had one in their inventory will get a free Treasure Redemption Token.

This seems to imply that Level is going to mean a hell of a lot less. Once you were a high enough level to play Ranked, about the only real difference that made was that you got an item whenever you levelled up. On that note, the “present” which you can open every 10 levels (or whatever) appears to have vanished from my inventory. I am Confused.

Unless I’m misunderstanding, there’s also something else a bit new: the items in that chest cannot be traded or marketed for three months. The Rare rewards can, but the standard rewards are basically locked to Dota 2 players who’ve opened that chest until 1 February. This is presumably to stop people from just getting a load of shit and dumping it all on the marketplace, devaluing the chest itself, but… hmm.

You can read the full notes for this Dota 2 patch over here, which include the happy news that the Buyback button now only responds to left-clicks. And no, there is no Diretide this year.