Dota 2‘s The International 2015/TI5 tournament has come to a close, with the grand finals leaving one team exhausted and victorious.

I think that’s about enough space that I can post the results without spoiling anything, right? Right. 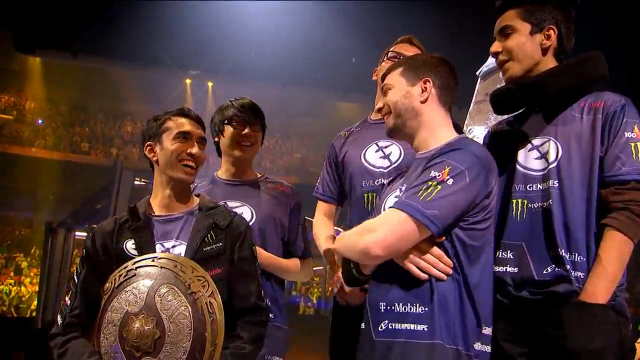 This year’s victors, claiming a prize of around $6.6 million USD, are Evil Geniuses: Clinton “Fear” Loomis, Syed “SumaiL” Hassan, Saahil “UNiVeRsE” Arora, Kurtis “Aui_2000” Ling, and their captain, Peter “ppd” Dager. Evil Geniuses have been a consistently strong team, placing well in most tournaments in which they’ve played, although the current lineup is relatively fresh with Aui_2000 and SumaiL having only joined earlier this year.

For anyone who watched Free to Play (Valve’s free documentary on Dota 2‘s eSports scene, and specifically, the first The International tournament): yes, this is the same Fear who was the focus of around a third of that film. It’s been a long time coming, but he’s finally got an International victory.

USA team Evil Geniuses took the series with a convincing 3-1 win over the Chinese CDEC, and yes, these matches were a lot more tense, drawn-out, and exciting than last year’s rather limp finale. That said, the chants of “USA! USA!” were maybe a little odd. I mean, they’re an American team, but Aui’s from Canada and Sumail’s from Pakistan. Oh well! 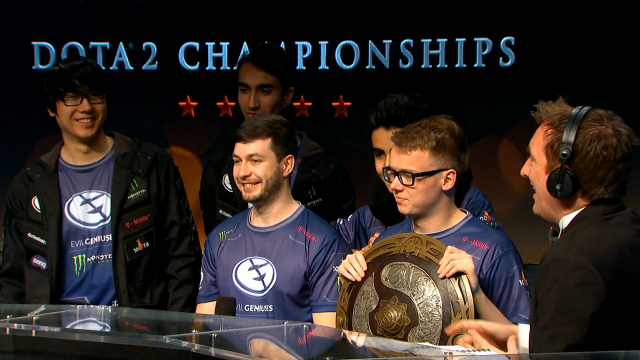 It was surprisingly hard to get a picture of them smiling, as they mostly just looked tired. Maybe not a surprise considering they had to play a best-of-three right before the final best-of-five, though!

CDEC themselves deserve an awful lot of praise for their own performance. They came into the tournament through a Wild Card slot, and wound up making their way through the winner’s bracket of The International’s main event, not dropping a single series (and only losing one game) in the main event until the grand finals. I don’t think anyone expected them to do as well as they did, but they hammered Cloud9, LGD Gaming, and even Evil Geniuses themselves in the upper bracket to get to those grand finals.

Evil Geniuses took this in stride, though; that loss dropped them into the lower bracket finals, where they took down LGD Gaming to claw their way into the grand finals for a rematch. And what a rematch it was. 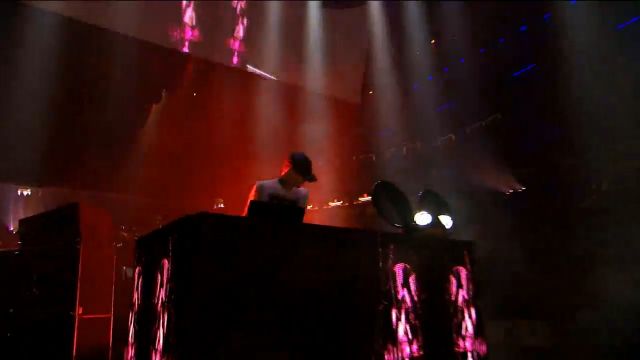 Apologies for the quality. Twitch wasn’t being very cooperative at this point.

Also, after the Aegis of Champions was awarded and the shattered winners left the stage, Deadmau5 came on to play the tournament to a close. And then do a lap of the arena. That’s a bit of a step up from Katie Kate.

TI5 in general was fascinating to watch, with superb games played right the way through. As noted by the analysts at one point, each of the “best plays of the day” highlight videos could conceivably be “best plays of the tournament” videos, if you didn’t know better.

My current illness willing, I’ll be writing up some thoughts on the tournament as a whole sometime soon. No promises, but we’ll see what happens.

The full results of the world’s biggest Dota 2 tournament follow, complete with the prize money awarded (according to Liquipedia):

Majesco to Publish “Glue” and new “A Boy and His Blob” with Five Employees, Coming to PC