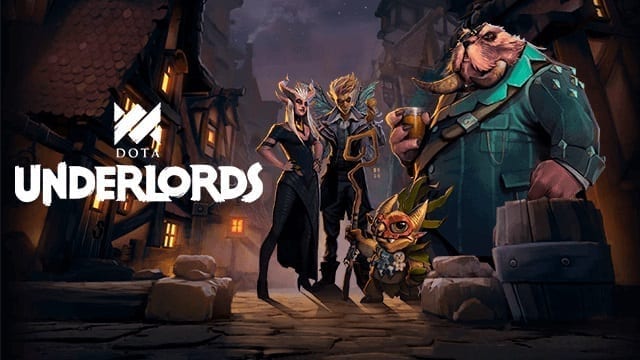 I’m in a rather unique situation in my experience with Dota Underlords. For one, I’ve never played Dota or Dota 2, as I just don’t like MOBAs. And I’ve also never played Dota Auto Chess, which started as a mod made by Chinese developer Drodo Studio. Back in late May, the Dota 2 development team at Valve announced in the Dota 2 blog that they were working on an official standalone version of Auto Chess. The announcement also confirmed that Drodo Studio would pursue their own Auto Chess with Valve’s blessing. Now there are two different versions of this game that’s becoming its own genre.

Dota Underlords borrows a few gameplay mechanics from the emerging deckbuilder genre, which is a personal favorite of mine. I experienced a little bit of confusion as someone who doesn’t know the first thing about Dota lore, but I got hooked on the gameplay right from the first couple of hours. It’s not exactly a deckbuilder, but the mechanics and pacing feel similar. Here’s our take on it if you’re looking to try it out. Dota Underlords on board

As you would expect from the name “Auto Chess,” Dota Underlords takes place on an actual 8×8 board, except it isn’t checkered like a chess board. You also won’t place all your units or heroes on the board right from the start. That’s where the deckbuilder mechanics come in, as you’ll have to build your cohort as you play. You’ll start with one hero from Dota lore, which you get to choose from a random selection. Then as you acquire more gold, you’ll be able to buy and upgrade your heroes.

Despite the tutorial, the first few matches will be overwhelming. Even if you understand that the point of the game is to find synergies between your units through their classes and the global items you’ll pick up along the way, that can be very challenging to put into practice. You’ll often find yourself trying to impose a pattern based on a global item that provides a buff, only to find that it doesn’t always work as intended. There are a lot of factors at play in Dota Underlords, especially RNG.

Positioning on the board is one such factor. In that sense, it kind of resembles certain CRPGs with real-time combat. You have your tank units, your melee and ranged units, your support units, and so on. There’s nothing stopping you from just dropping the units on the board haphazardly, of course. If you want to win, it pays to learn how each hero operates and what the best position for them is. Usually you’ll want your tanks on the vanguard, your ranged units on the sidelines, and your assassins on the back. Those are the basics, but there’s much more to it. 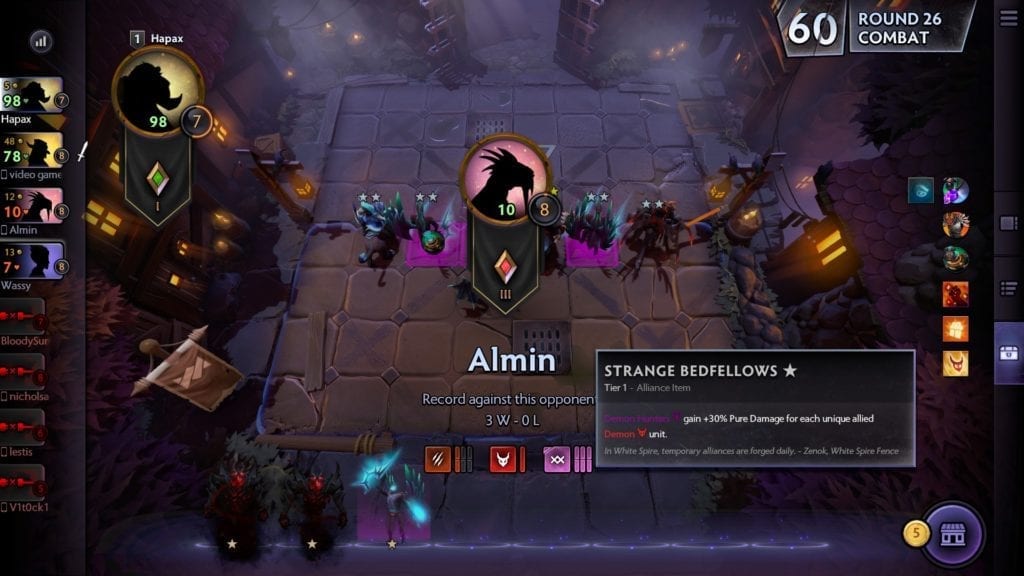 The synergies of Dota Underlords

Deckbuilders and strategy games like this thrive on synergies between units and their classes. There’s quite a bit of elegance to the synergies in Dota Underlords, in that they feel organic and not just cobbled together. Although I can’t compare it with the original Dota Auto Chess mod, I think the gameplay foundation currently available will make for something even more exciting as Valve builds on top of it. Right now it’s enough to keep players hooked for hours, with a reliable progression system.

There’s also a sense of progression as you go through a match. At first, you might find yourself ahead of your opponents, feeling that your cohort is very powerful, so you don’t need to worry much anymore. If you don’t pay attention to how the opponents evolve and upgrade their units and their synergies, you’ll most likely find yourself humbled very soon. The opponents might even find ways to counter your synergies. There’s a lot going on under the hood that dedicated players will be able to use to their advantage, even if there’s also RNG involved. 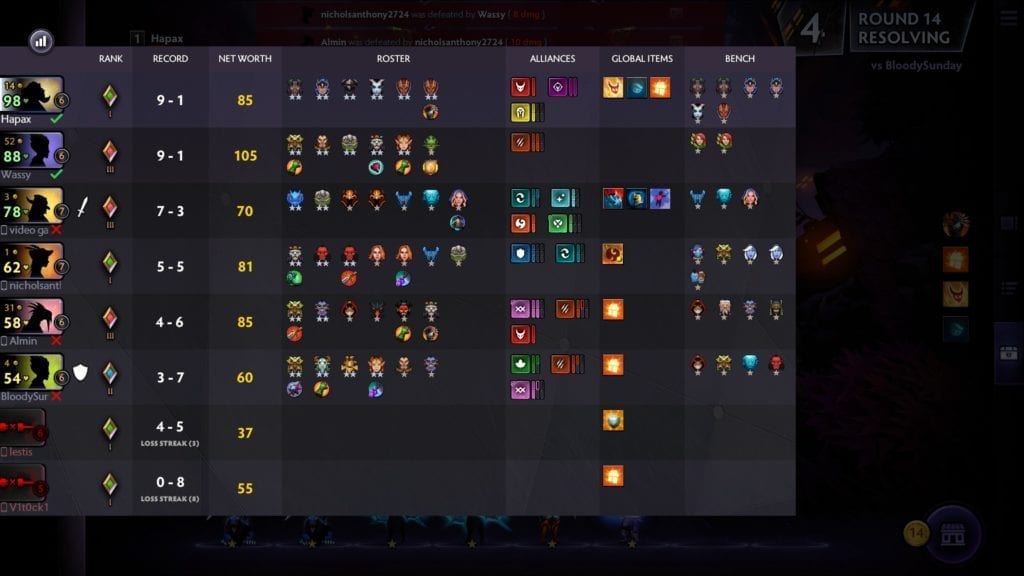 Dota Underlords definitely keeps you on your toes throughout the entire match, which can take up to an hour. You’ll play against seven other players, going through several rounds, depending on whether players leave the match or stay on until the end. I haven’t had any problems with the matchmaking. I’ve found that most players are on the same level as me, and I didn’t feel like they had any edge other than probably being more attentive to the systems.

The rewards I’ve gotten so far aren’t much, mostly cosmetics that don’t really add anything to the game. Valve is still prototyping its battle pass, called Proto Pass, and that’s why it’s free for now. Obviously there are plans for further monetization in the future, but I don’t think Dota Underlords will lean toward microtransactions and pay-to-win. For now, you can just do the usual daily rewards so you don’t have to pay anything, and that’s a good-enough start. 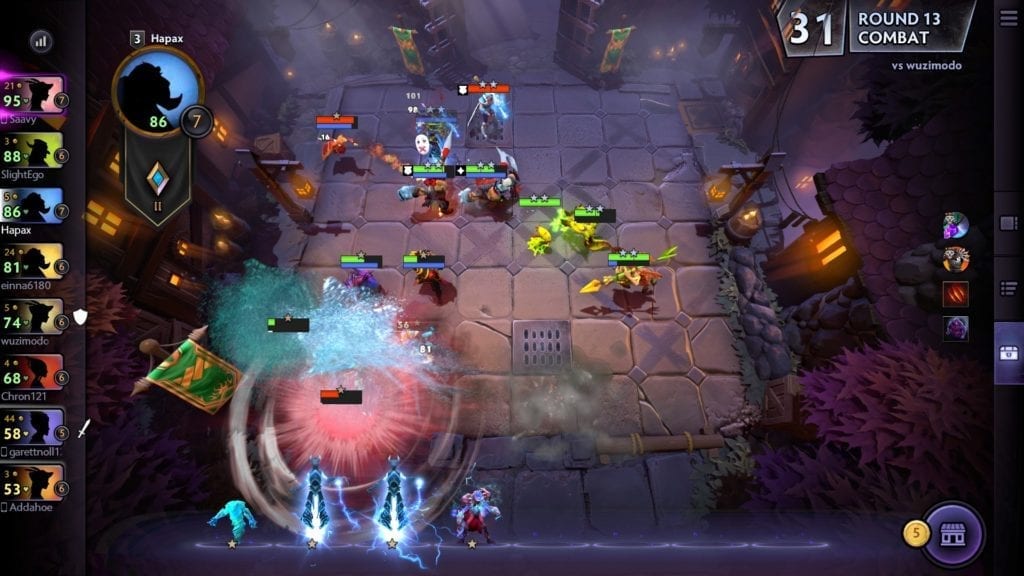 According to the Steam page, Dota Underlords will stay in Early Access just for a few months. The full version will include a different approach to the gameplay where the player will embody an Underlord persona that will affect gameplay. There will also be ranked matchmaking, seasonal rotations, private tournaments, and a proper battle pass. So it looks like Valve is really going all-in with Dota Underlords, and it’s not just a side project. It’s also much more likely to be successful than Artifact, which was a true disaster.

Dota Underlords is an engaging and often addictive free-to-play strategy experience. The art direction and soundtrack are pretty decent for an Early Access game. The real-time battles can get a bit hectic, and it’s hard to make out what’s happening in the fray. But it’s definitely up to the standards of Valve as a game developer. I intend to keep an eye on it in the coming months to see how it evolves.

Dota Underlords is available for free on Steam, Google Play, and App Store.