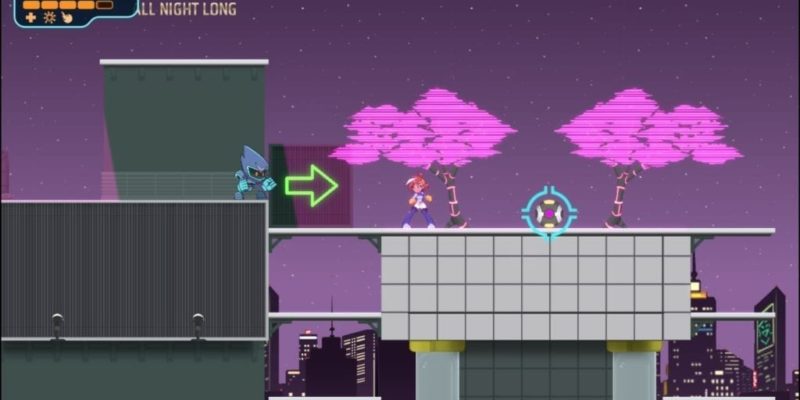 Some games are much more than the sums of their parts. Double Cross has some decent aspirations, but it ultimately feels like a bit of a letdown. Overall, it contains enough of a hook to keep me engaged, but it wasn’t enough to keep me from walking away a little disappointed.

Double Cross‘ narrative is one of the best things about it. It has a Saturday morning cartoon vibe that it pulls off nicely. It does this via a combination of strong character designs and on-the-ball writing. You play as Zahra Sinclair, an agent of the inter-dimensional police force known as RIFT. RIFT monitors the different dimensions and strictly enforces usage of portals that allow people to move from one to another. However, as is usually the case, something nefarious is afoot! As the name suggests, Double Cross is about Zahra’s hunt to determine who among her colleagues has double-crossed RIFT.

The game is very cartoony and silly but also deals with a bit of heavier subject matter at times. The dialogue is generally entertaining, and I’d say it does a very good job of keeping the game balanced. It doesn’t go too far in either direction, and the overall tone of Double Cross just works. By the latter part of the game, I had gotten pretty into its story and characters – which is impressive, as it naturally has one of those stories where the fate of blahblahblah hangs in the balance. The story definitely acts as the lynchpin that holds the whole experience together. 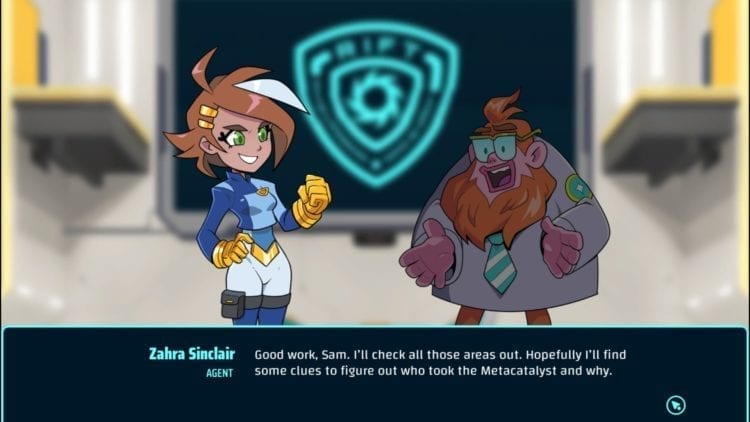 Combat Is The Weakest Link

As far as gameplay goes, Double Cross initially allows you to select one of nine levels divided across three different planets. There’s a goo planet with blobs of gel, a planet with an 80’s neon Japan vibe complete with robot ninjas, and a wasteland planet overrun with dinosaurs. You’ll primarily be doing two things in all of these: platforming and fighting. The platforming is fine for the most part. The movement feels a bit too slippery, but it generally works as it should. The unique travel mechanic involves the Proton Slinger, which allows Zahra to grab onto anchor points to launch herself around.

While the traversal is fun, the combat doesn’t fare nearly as well. Double Cross handles combat in an extremely uninspired way. Most of the time, you can simply walk up to enemies and punch them until they die. Zahra unlocks a few other moves, such as a slide attack, a jump kick, and a stomp, but they don’t do anything to make the combat feel less generic. It also doesn’t help that the game loves to lock you into areas with waves of enemies. Challenges such as these are fine when combat is good. In a game like this, it just feels like padding.

Defeated enemies drop orange energy spheres that fill up Zahra’s energy meter. This allows her to use certain abilities, such as healing, generating a shockwave, and shooting a big blast. Due to how simple and easy the combat was, I almost never used the two latter abilities. Each level is also littered with hidden collectibles. When you collect enough of these, Zahra levels up, which unlocks more moves and passive abilities. These abilities include increased the time slowdown duration when using the slinger to the amount of damage received from enemies. I enjoyed hunting these collectibles down, and many of them were fairly tricky to find. 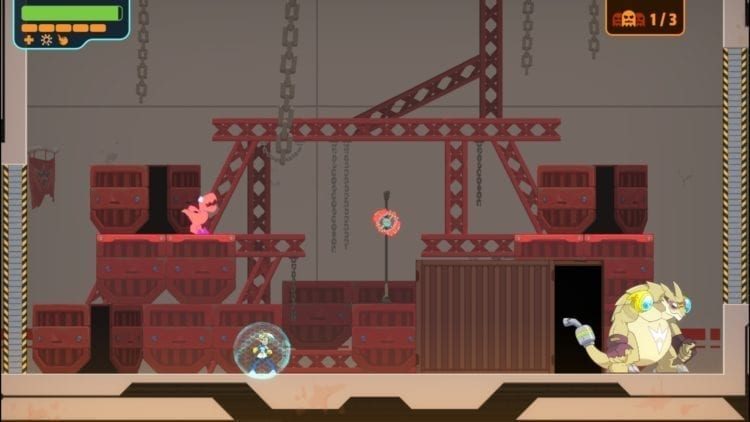 Unfortunately, the levels are all a bit boring. There’s less detail than I’d hoped to see, and the areas don’t feel lived-in or organic. The themes of each world could have also used some sprucing up and the neo-Japan aesthetic feels like it’s been done to death. It’s a shame that the levels don’t have as much personality as the character designs.

Double Cross hits a sweet spot for the difficulty, and the game isn’t too easy or hard. It’s certainly challenging in spots, but most of the harder parts won’t take too many tries to overcome. That is, aside from one specific part. There’s a level that requires you to get a certain score in a series of arcade games, and one of them is at least ten times harder than anything else in the game. In it, you have to guide Zahra through a series of rooms covered in spikes. You must use anchor points to sling through openings in order to increase your score. Hitting a spike means you start over from the beginning. It was such a frustrating mess it made me want to quit the game and never look back.

I’m glad I kept going, though, as Double Cross gets better the deeper into it you get. Each level has Zahra finding clues that she can show to her associates in order to crack the case. She does this in RIFT’s headquarters, which you can freely roam in between levels. Once she finishes the first three levels in each world, she goes to a fourth level and fights a boss. These boss fights are pretty simple, and with the exception of a tedious neo-Japan boss, they’re fun and satisfying. Once you beat all three bosses, you move onto the 13th and final level. The final boss fight really sold me on the game, as it does something really satisfying and clever that I’m not going to give away here. 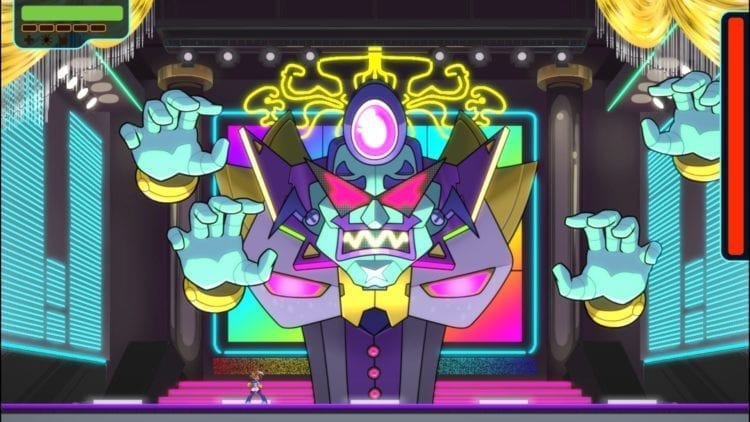 A Short But Sweet Double Cross

In the end, Double Cross is a fairly short game. It should take most players five-to-six hours, and there isn’t much left to do after that, save for hunt down any missed collectibles. The length felt right to me, though. Early on, I found the game underwhelming. But by the end, I was glad I played it. It’s a fun game with an entertaining story and characters. It’s easy to recommend to fans of platformers who don’t mind some disappointing combat and some less than stellar levels. In the end, though I’d certainly like to see Zahra and company again.

Double Cross suffers from underwhelming combat and bland levels but makes up for it with a good story and fun platforming.

Atlas Doesn’t Deliver The Booty, But Could Still Become Treasure