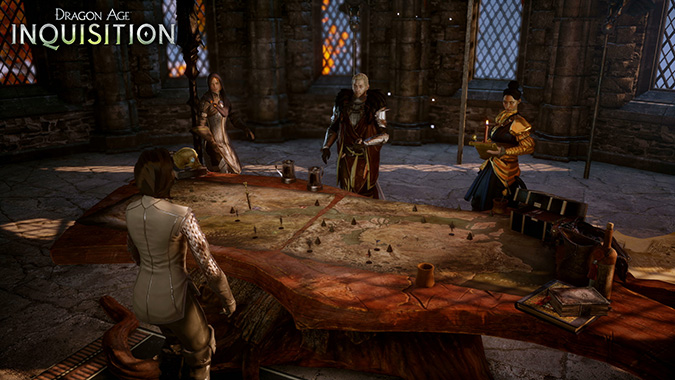 Enough room for two maps with plenty of space to spare. A fine table indeed.

After explaining interior decorating, the official Dragon Age: Inquisition site has now moved on to table dressing. This may not actually be an RPG after all, but an elaborate Trojan Horse to teach games players about keeping a tidy house and dinner party etiquette.

This isn’t just a normal, boring table for putting plates and salt shakers on, though. It’s a WAR table, for war and stuff. While it’s not quite as impressive as the war table belonging to Stannis in the TV version of Game of Thrones, it’s still pretty handy in a functional sense.

According to Dragon Age: Inquisition producer Cameron Lee, it’s possible to launch over 300 specific missions from this table, including “scouting missions to establish the first camp in a new area you’d like to explore, building missions to raise structures in the areas you’ve being exploring, recruitment missions to bring expertise into the inquisition, treaties, resource-gathering [and] political assassinations.”

These missions can also change, depending on your prior options and choices throughout the game.

Sending out your agents to complete these missions costs Inquisition influence and power, which in turn is generated by bringing stability to regions, completing quests, exploring and various other party activities. It’s also said to be necessary to spend influence in order to unlock each sequential plot arc.

Agent operations sound as though they work a bit like Brotherhood missions in Assassin’s Creed: Brotherhood. You consult your advisors (Leliana, Cullen, and Josephine) and then decide upon a course of action, which will the trigger a timer. Once that timer is up, you’ll learn the outcome of your choice and whether the agent(s) have been successful. Operations can earn you gold, crafting materials, equipment, new recruits or “even the ability to rebuild structures you’ve seen on your adventures.”

In short, in between your personal party quests and missions, it sounds as though you should probably be checking back at the war table to make sure the overall Inquisition efforts are proceeding smoothly.