BioWare’s Dragon Age: Inquisition streaming blitz continued today with a half hour look at some of the rooms and features of the Skyhold stronghold. Obviously, if you want everything about Skyhold to remain a surprise then you should probably hold off reading this or looking at the screenshots.

The version being shown today was the Xbox One release, so don’t worry too much about the graphics/image quality being shown in these, PC players. Once the stream is archived, you’ll be able to re-watch it at BioWare’s channel.

Their little tour began in the Skyhold throne room. 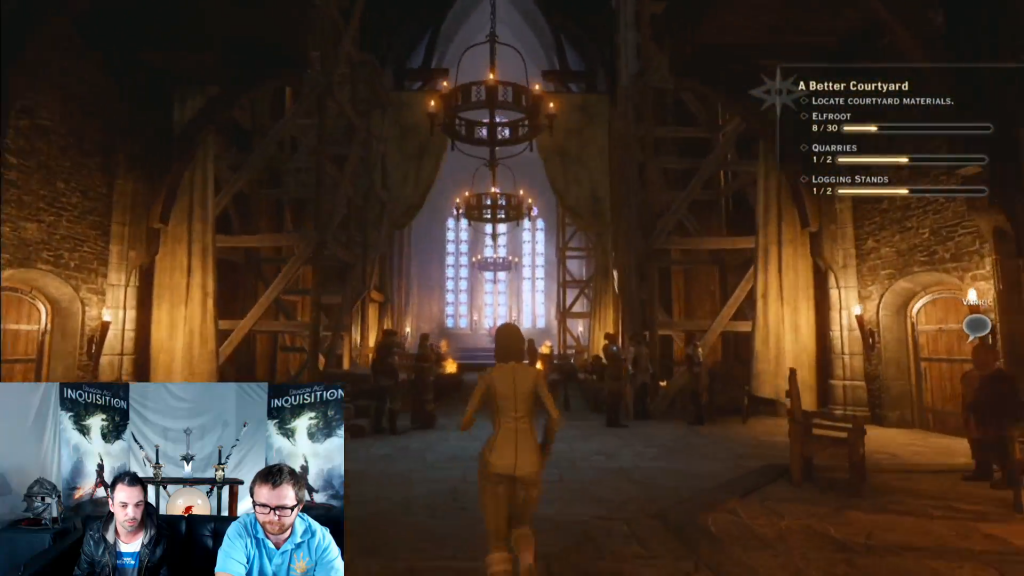 You might notice a couple of things here. There’s scaffolding around the place, which is because at this point in the game Skyhold is still in a state of being rebuilt and repaired. Also, the protagonist is in more casual attire. Each hero/class type has informal gear they wear around Skyhold. As far as I could gather, there’s just one clothing option for this which can’t be changed. 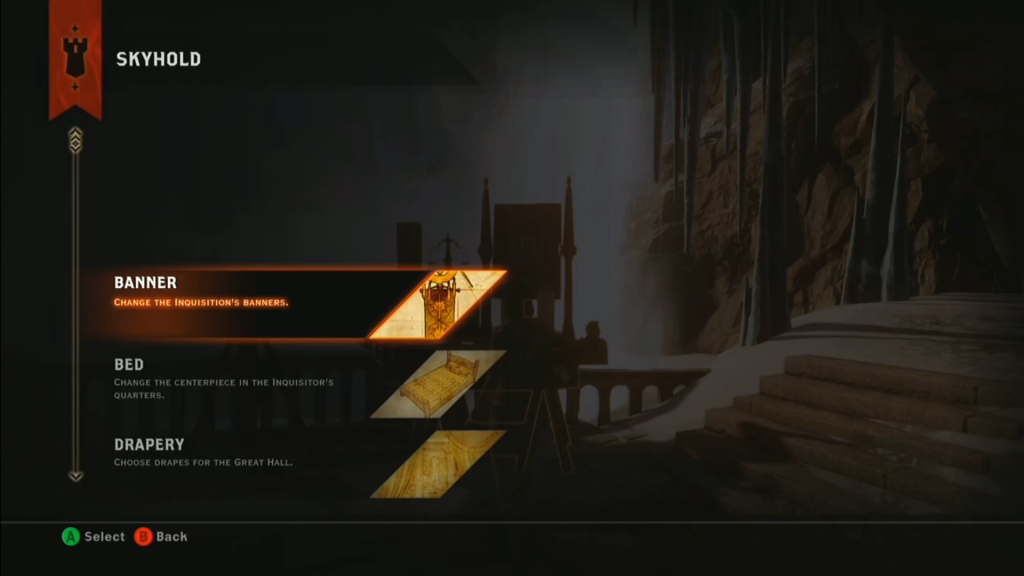 Dragon Age: Inquisition will let you customise bits of the Skyhold fortress to suit your design tastes. You can see banners and so on in the menu above, which also scrolls down further to show things like Heraldry and other furnishings. 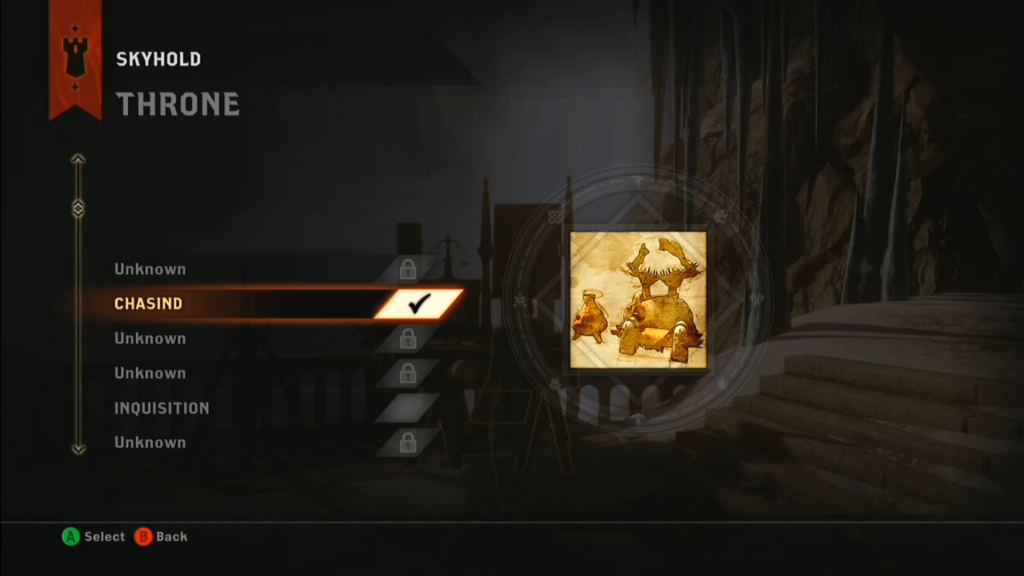 Here are some of the throne options. At this point in the game, many of them are still locked/unknown. 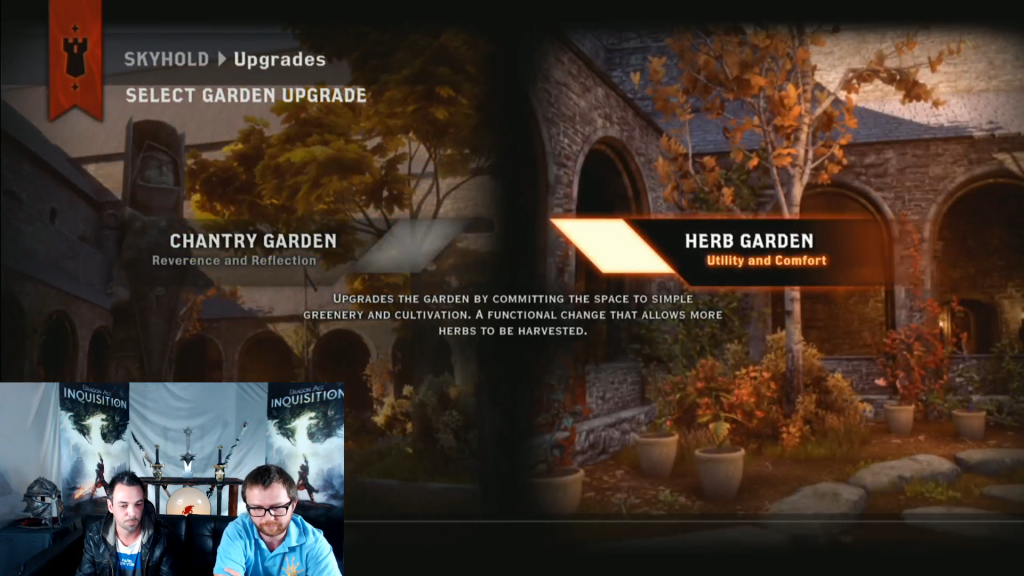 It’s also possible (indeed, desirable) to upgrade certain rooms and aspects of Skyhold. Here, BioWare has requisitioned the necessary resources to build either a Chantry or Herb garden. Each will offer benefits and drawbacks. Access to upgrades like these was said to be acquired through quest rewards, war table operations or just straightforward purchases. 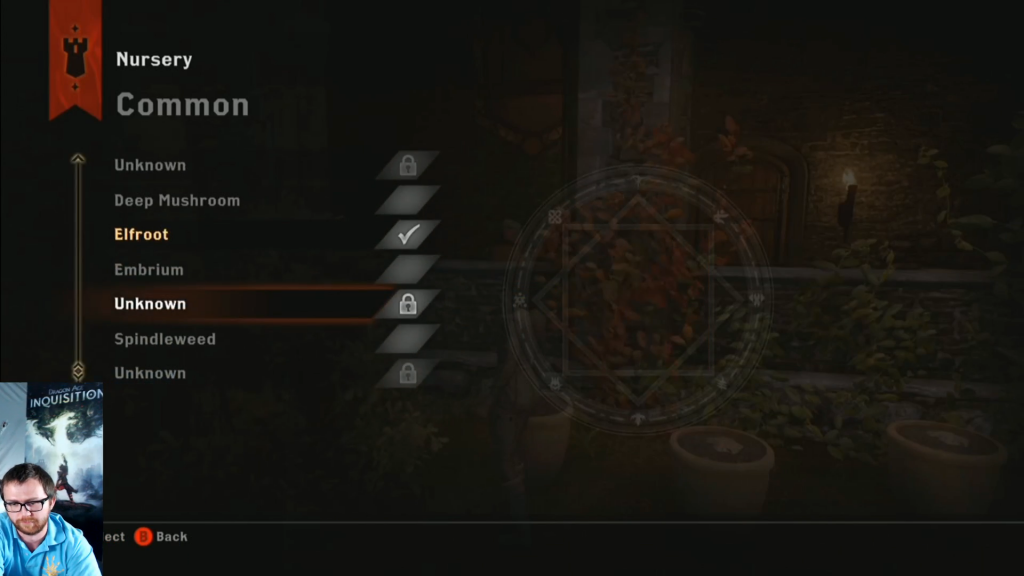 Once in place, different types of herbs for potion crafting can be grown and cultivated in the garden. 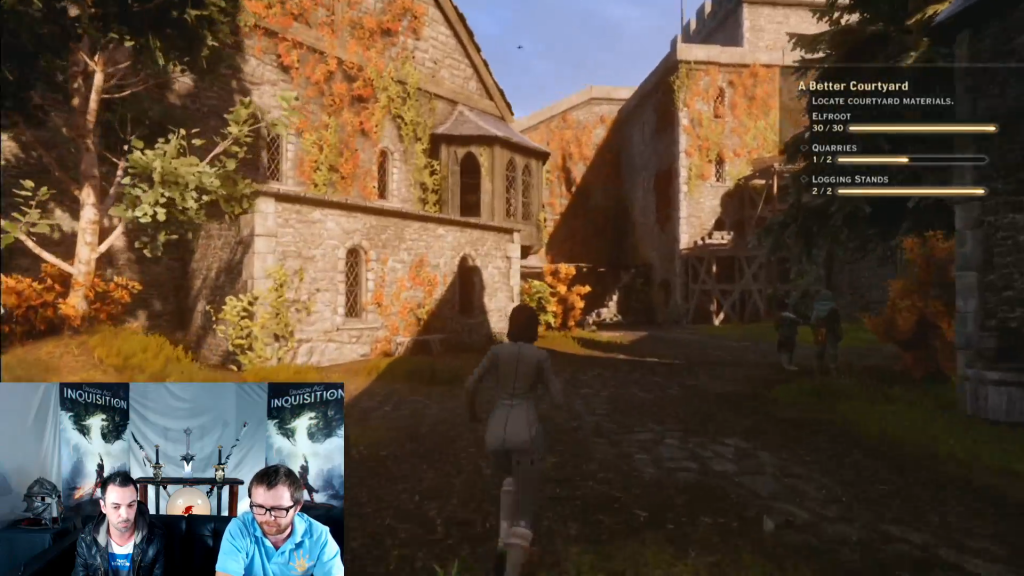 An external courtyard shot, on the way to the dungeons. 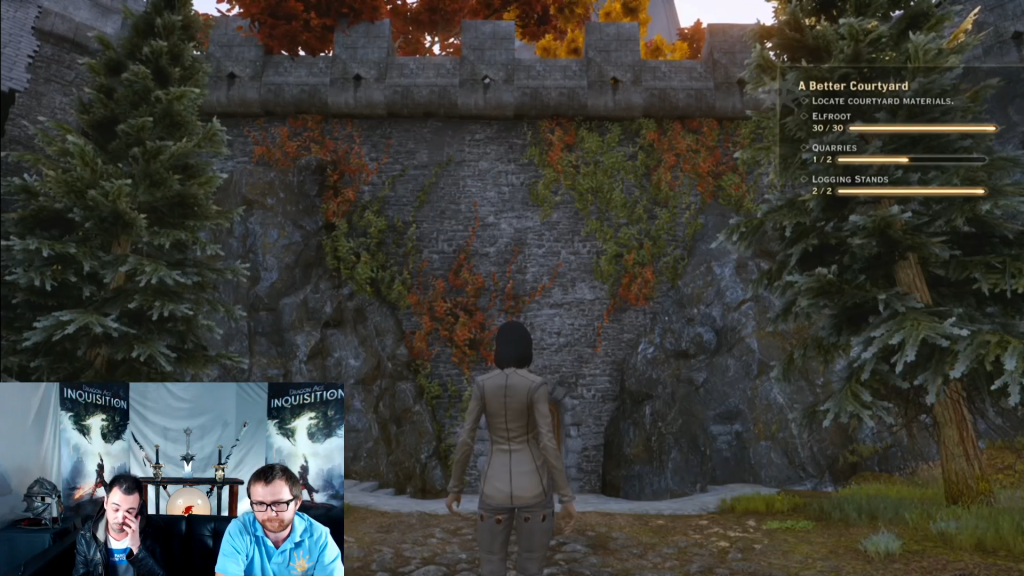 The utterly exciting doorway to the dungeons (which I screencapped, so I’m using it, damnit.) 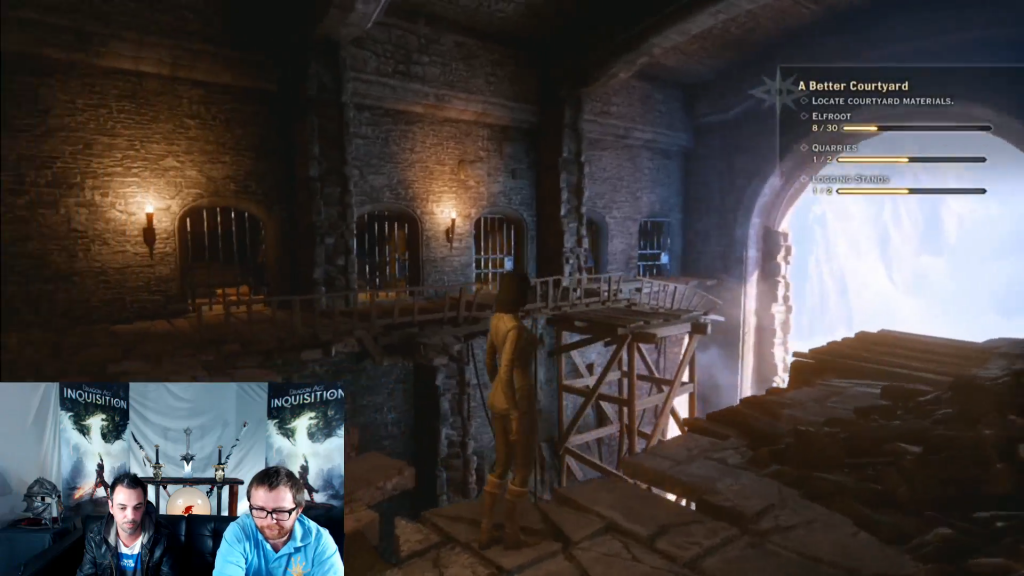 And finally the rather dilapidated dungeons themselves. You’ll be wanting to check down here regularly in case there are any prisoners you need to haul up to your throne room for a bit of Dragon Age: Inquisition judgement. 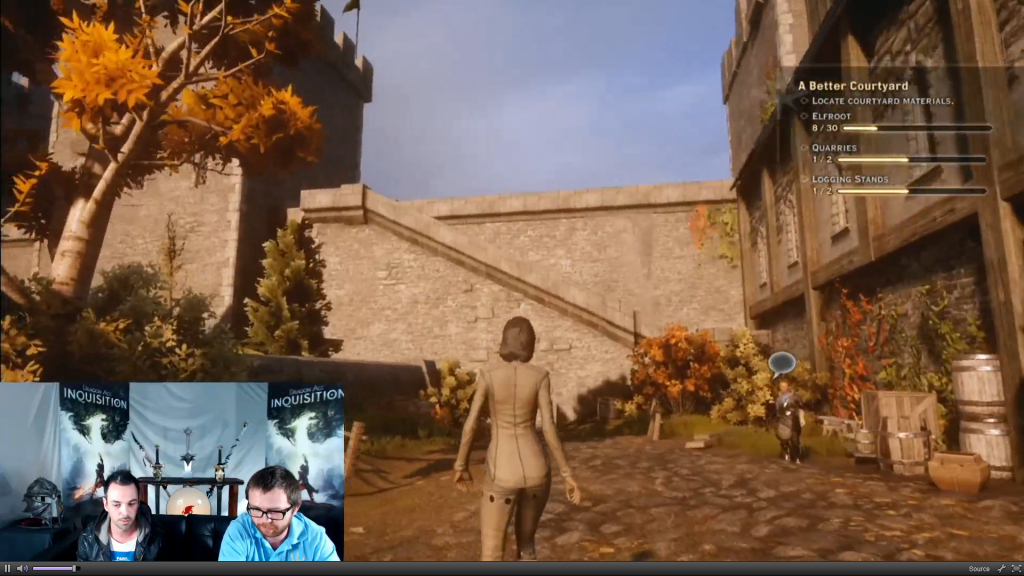 Another transition type image, on the way to play some games with Cullen. 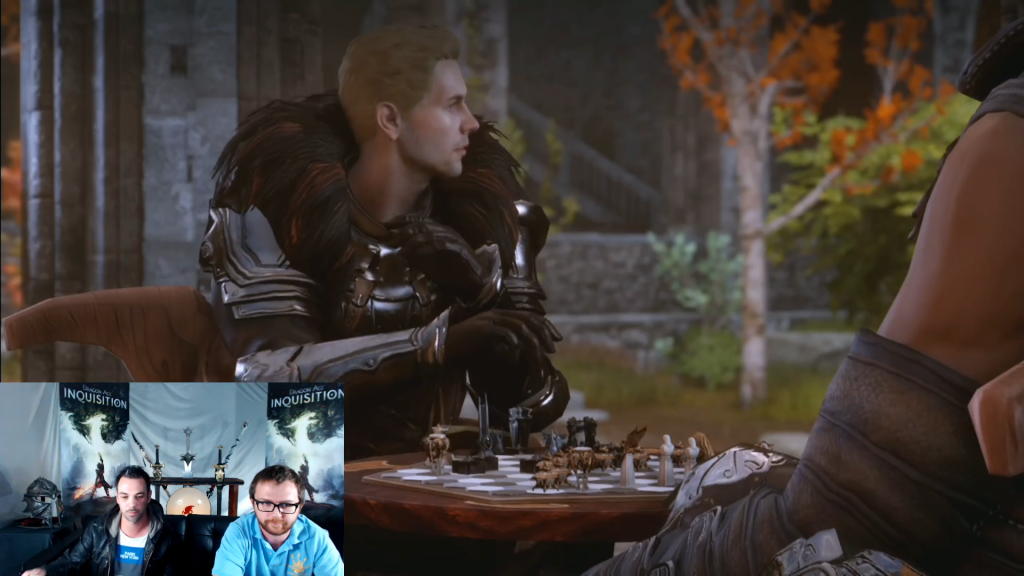 Cullen and Dorian are playing some not-chess, but once Cullen wins you can have a chat with him and challenge him to a game as well. You don’t actually get to play this, but you can decide whether to play fair or just cheat. 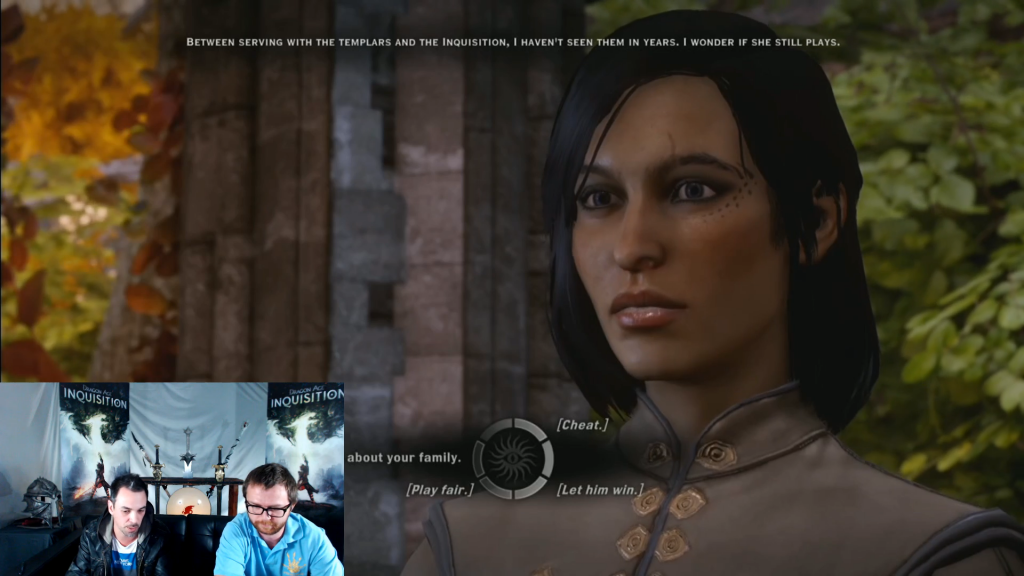 Cheating at games? What kind of Inquisitor are you, anyway? 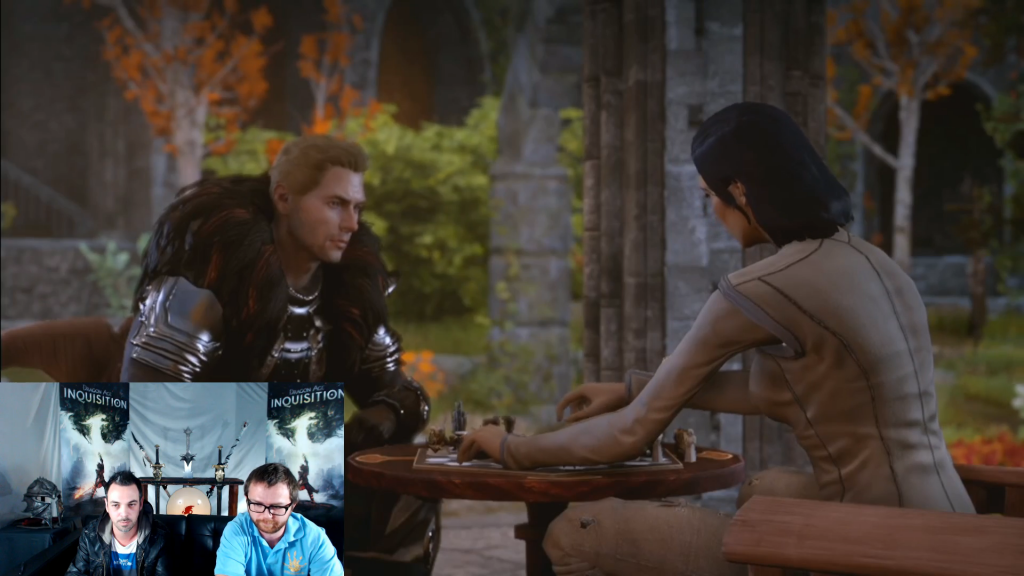 Your various followers, advisers and companions all hang out in various parts of Skyhold. This interaction with Cullen is just one example of the between-mission dialogue you can have with them. We’ll see another one shortly. 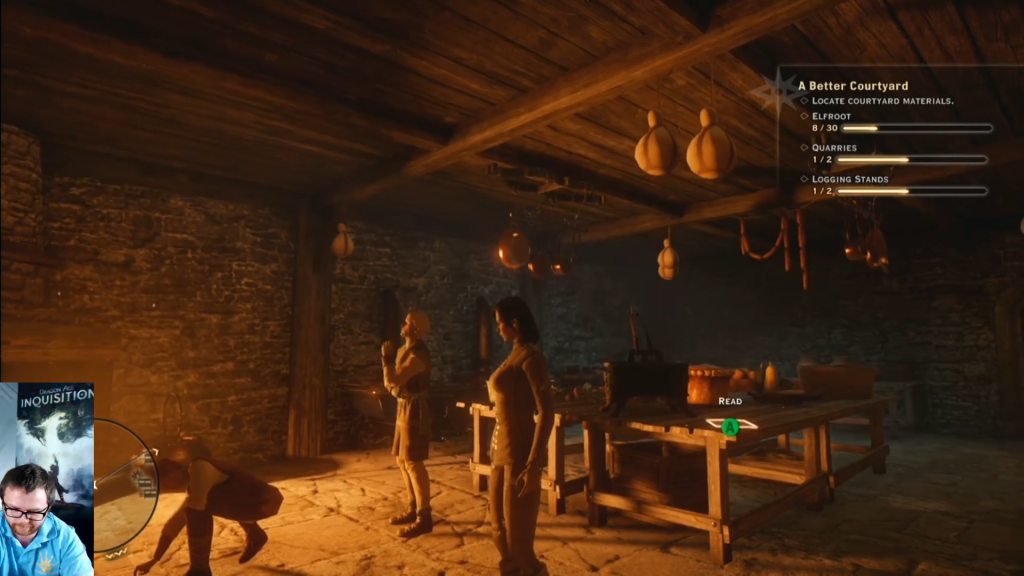 But first there was a brief look at the kitchens. 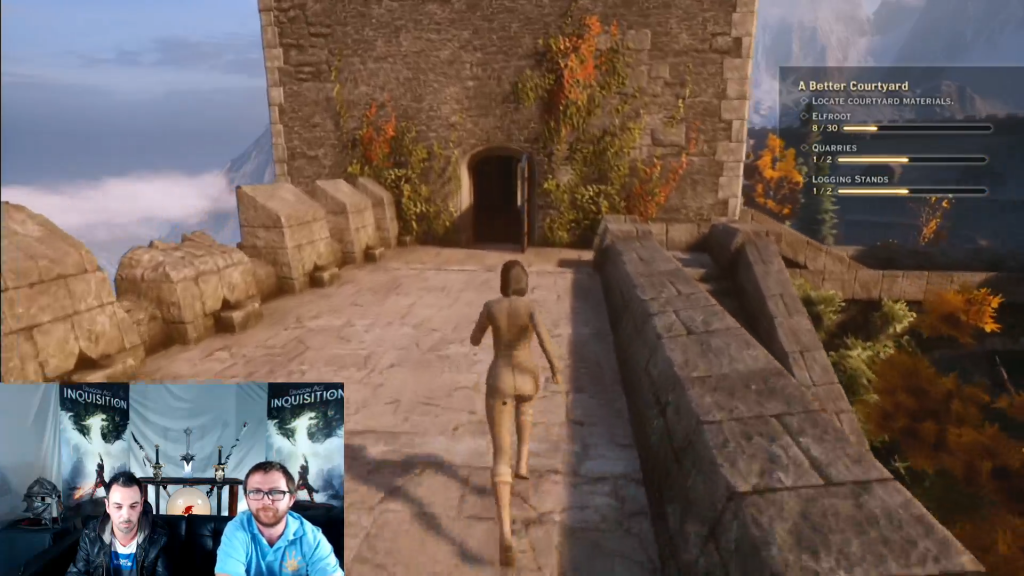 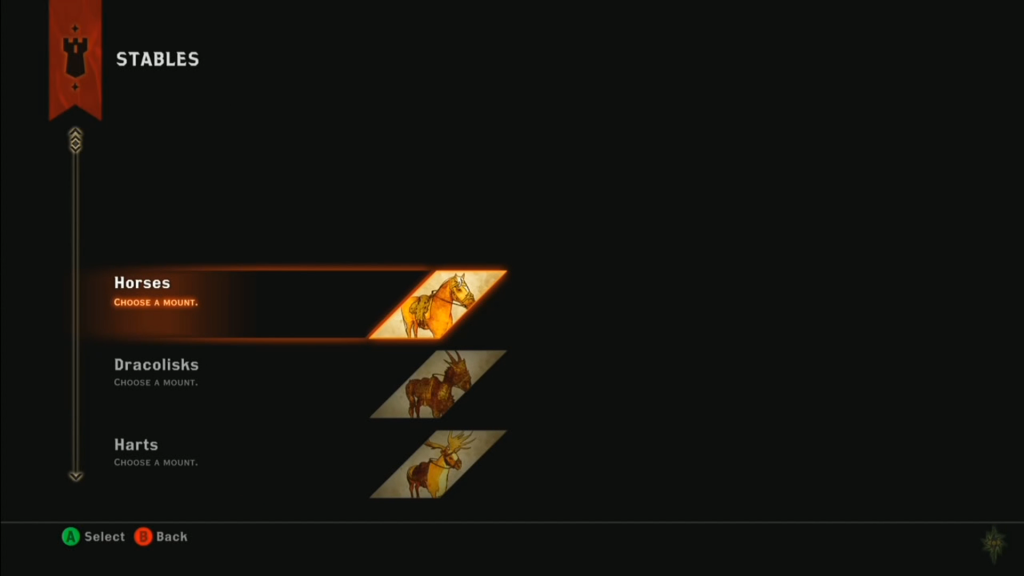 The stables, where you can look at all the different mounts you have (or haven’t yet) unlocked in Dragon Age: Inquisition. 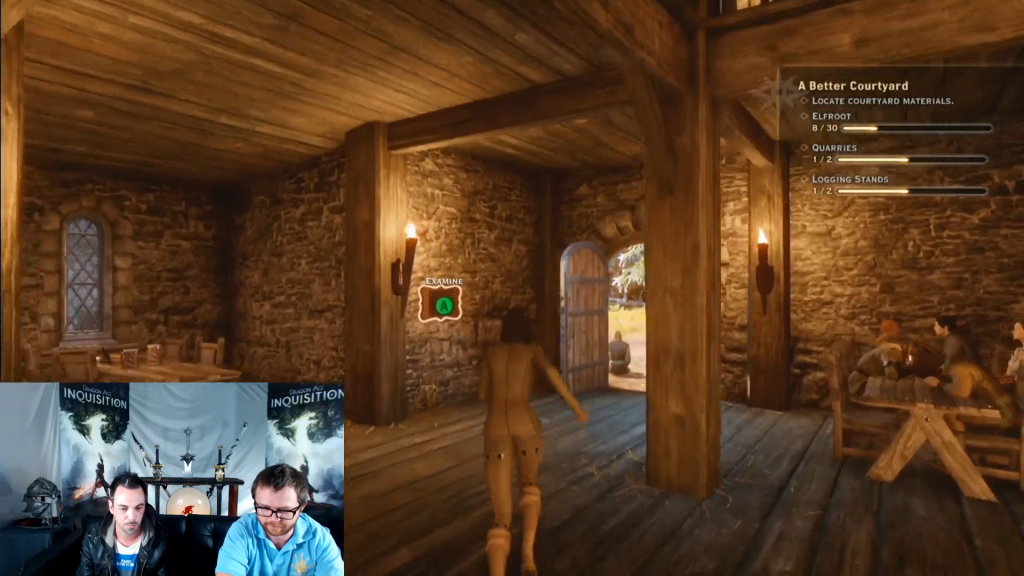 And a tavern. Because every good fortress needs a tavern. 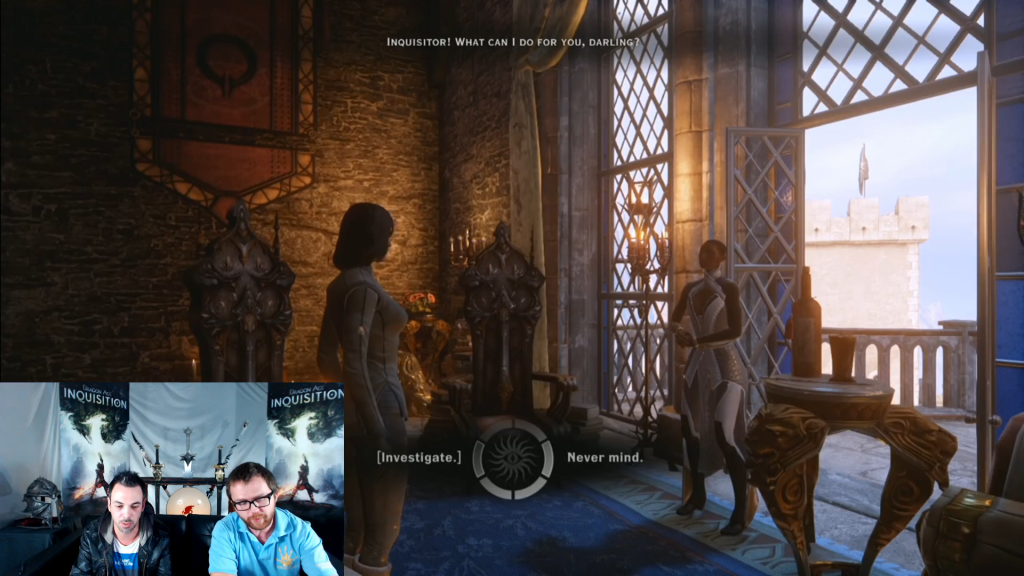 This is where Vivienne likes to hang out. 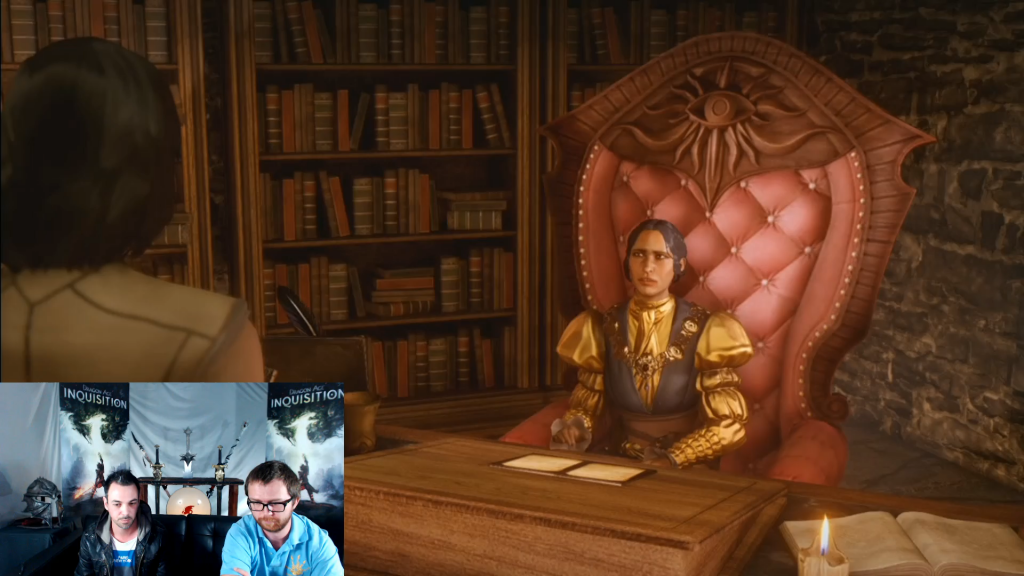 While Josephine prefers to get work done in her gigantic chair. This particular chat and discussion has more immediate consequences, as we’ll see. 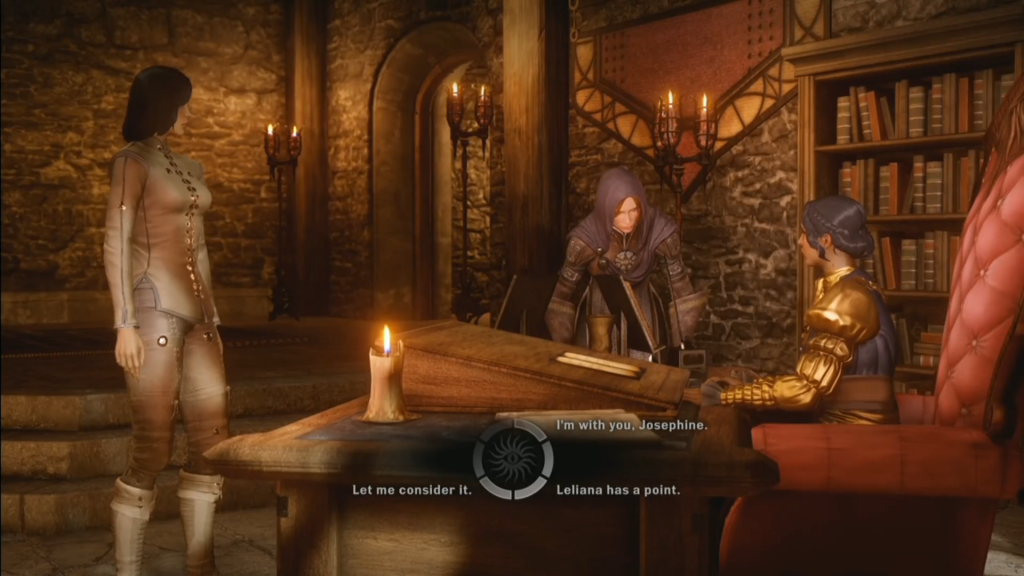 The decision concerns a contract which the Inquisition would benefit from owning. Spy-master Leliana simply wants to steal it, which Josephine prefers a more diplomatic approach. Your choice here will lead to the option of a specific (and different) operation at Skyhold’s war table. 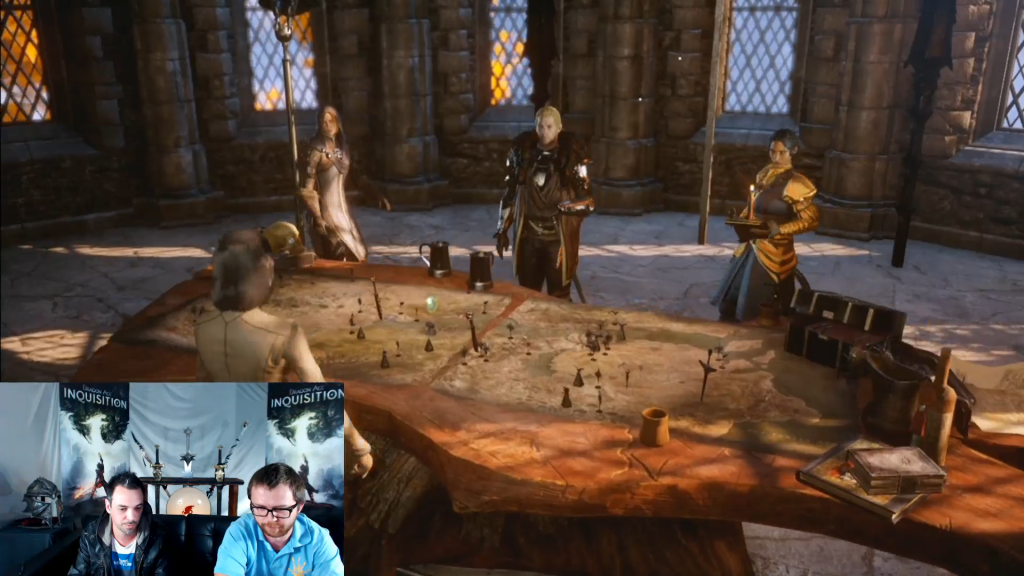 Siding with Leliana, for example, would add an operation to steal the contract. Which you could launch pretty much immediately, if you have the necessary resources/power/influence to do so. 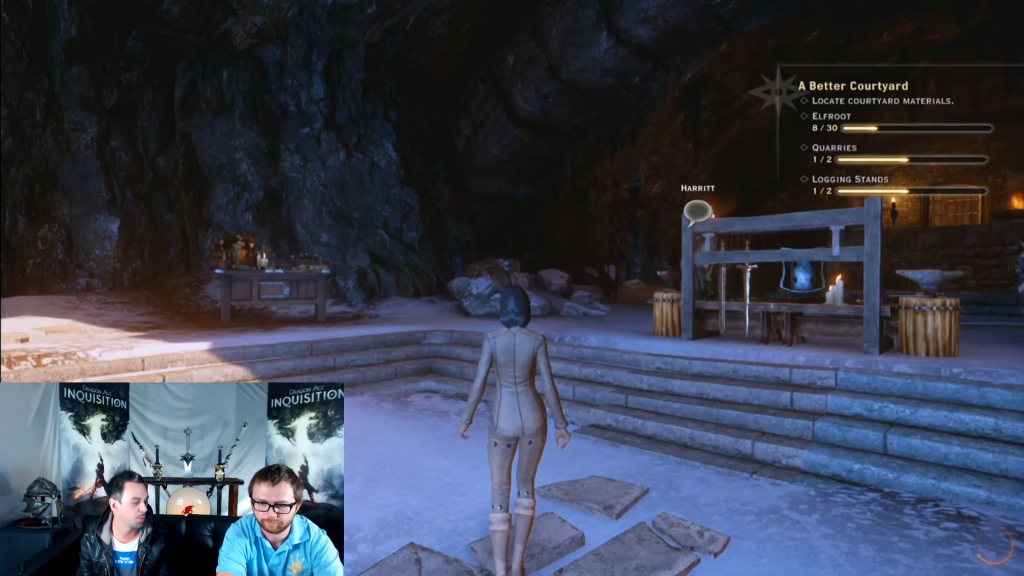 Finally, here’s the Undercroft where much of the Skyhold-based crafting happens. You can create new potions, forge weapons and all that kind of thing down here. 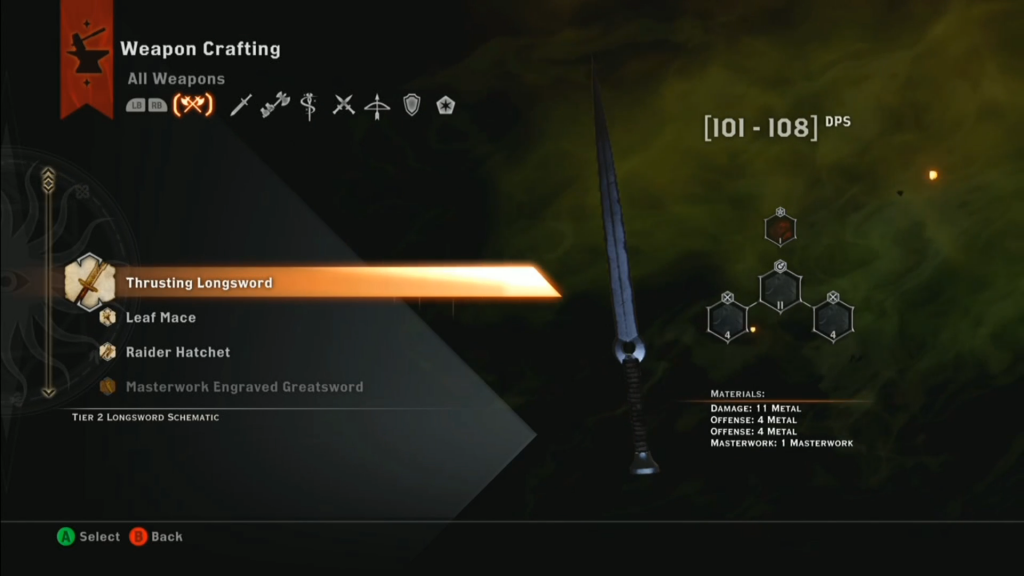 Here’s a look at the interface for weapon forging and customisation.

Again, the full stream will eventually be archived at BioWare’s channel if you wish to see it for yourself. If you haven’t already, you can also read previous articles about character creation (with images) and the PC specific options and interface.

Dragon Age: Inquisition will be released in mid November. The Dragon Age Keep will enter open beta on 29 October.

Dark Souls gets Steam achievements, GfWL on the way out