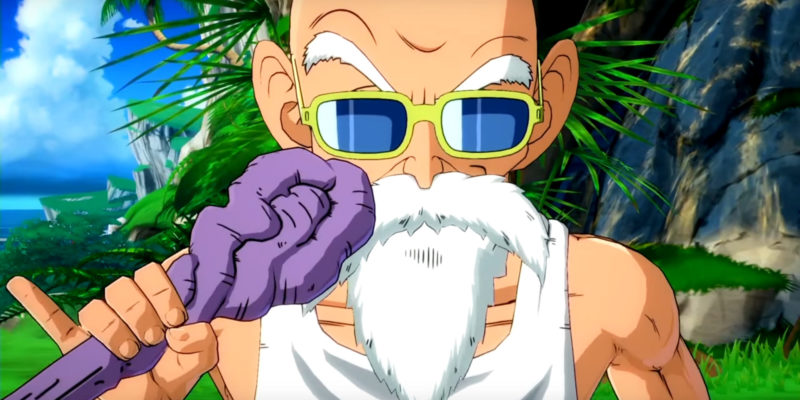 Master Roshi is the teacher of Goku, Krillin, and many other big hitters in the Dragon Ball universe. He was also featured prominently in the Tournament of Power arc in Dragon Ball Super, which his appearance here is based on. We got the tiniest of sneak peeks last month, but earlier today we got a slightly longer look at what Master Roshi can do courtesy of a tweet from Bandai Namco.

We can see his level 1 super, the Mafuba, which can tag out the opponent for a set amount of time, as well as his level 3 which has him go buff for a max power Kamehameha. One of the biggest things about Roshi that we learned last month is that he will not have a super dash, unlike every other character in the game. Instead, he will have a variety of leaping moves, which as we can see in the trailer, will allow him to extend his combos in a fashion similar to superdashes. The last Dragon Ball FighterZ DLC character that had a key mechanic removed, Videl, didn’t work out so well. So hopefully Master Roshi will fare a lot better.

What is Master Roshi capable of?

Here's a sneak peek of our upcoming #DBFZ DLC Character.

Show of hands for a Jackie Chun costume

At the end of the trailer, we got confirmation that there will be a Master Roshi showcase taking place on Sunday, September 13 at 2PM EDT on the game’s Twitch channel. We will get to see all of Roshi’s moveset, as well as a look at the new balance patch that was also teased last month. According to producer Tomoko Hiroki, the balance patch will have a heavy focus on assists, in an attempt to buff up some of the lesser-used ones. Hopefully, by the grace of Kami, along with this new Dragon Ball FighterZ DLC, Bardock’s B assist gets nerfed as well.