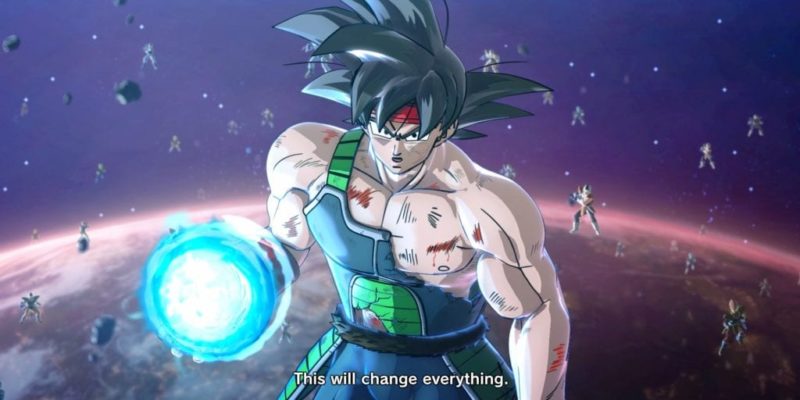 Here we are again, everyone: an anime game based on a franchise of which I have basically no first-hand knowledge. I did watch a few episodes of Dragon Ball Z! There were some screaming people and I think one thing happened over the course of three episodes. We didn’t really get on.

The short version is that Dragon Ball Xenoverse 2 runs at 60 FPS, has tolerable mouse/keyboard controls, doesn’t have too many detailed options but enough to remove most of the visual annoyances, looks largely okay, and is Fanservice: The Game: The Sequel. As for the long version… 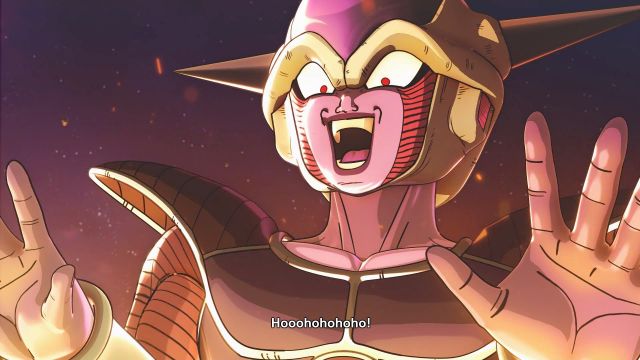 Just in case you were in any doubt as to whether or not this was actually Dragon Ball.

Let’s start with the options. Of the five sub-menus, we should probably have a gander at Graphics Settings first. 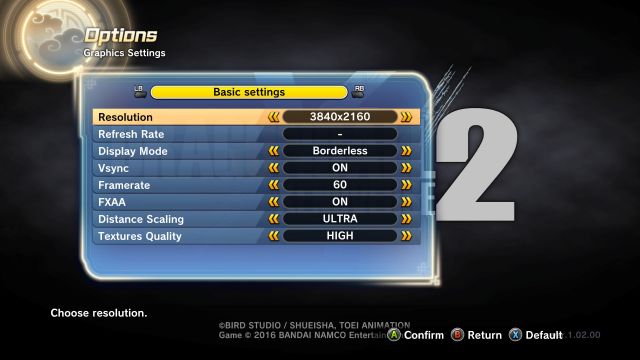 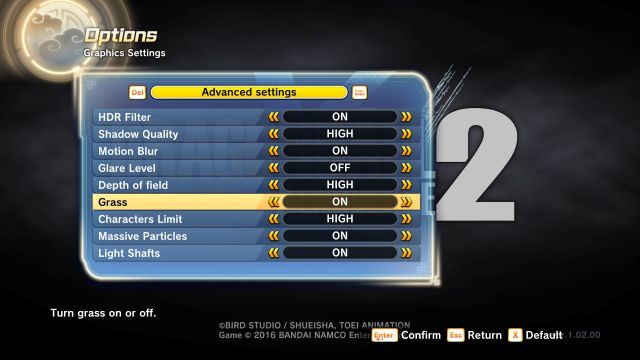 So, good news: Dragon Ball Xenoverse 2 supports resolutions up to 3840×2160. DBX may have also done this; it wouldn’t let me (at least) try setting it above 1920×1080, but I was never able to tell whether that was a restriction based on my monitor. Either way, it’s not a problem here.

Advanced settings are slightly limited, but what they offer up is good stuff. You’ve got basic stuff like light shafts and massive particles (and I’ve only just realised that putting those two together sounds surprisingly filthy), but the big ones to me are things like motion blur and glare level. It might just be me, but with everything whacked up to full, Dragon Ball Xenoverse 2 looks like ass. It’s really a less-is-more thing: with some of this stuff turned off, it looks sharp and crisp and lovely, but with everything ramped up… blergh. 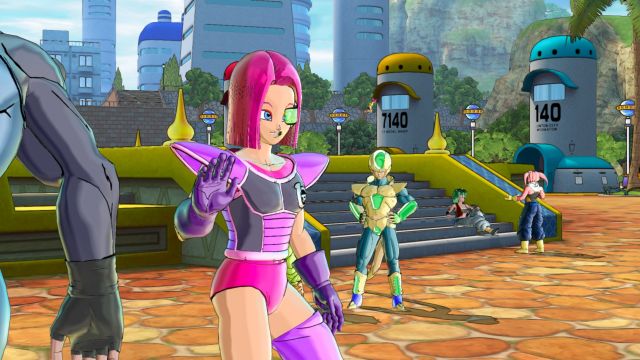 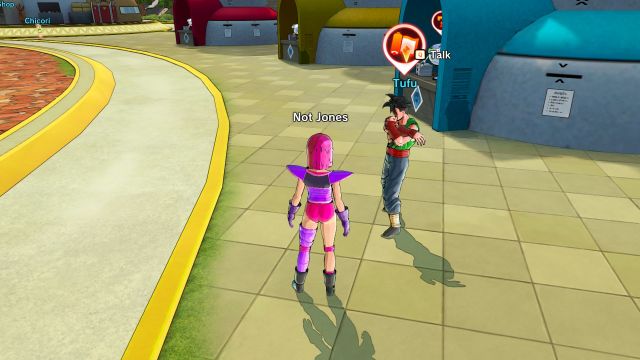 Possibly personal taste, but I do much prefer the crispness of having most of the settings turned off, as in the second picture. Although these maybe aren’t the best comparison shots.

We need to talk about the controls, but I do want to briefly mention the Game Settings menu, if only because it has a Voice Chat Microphone and a Voice Volume option. Yes, you can disable and mute voice chat. Considering so many games forget about this, I hereby offer up a toast to Dragon Ball Xenoverse 2 for making sure I don’t have to listen to other people.

Anyway, controls. Everything is redefineable, which is great, but I have a weird confession to make: this time around, I actually prefer the mouse and keyboard controls to gamepad. 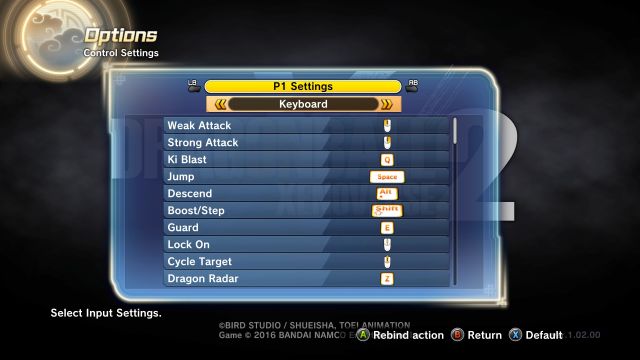 Attacks on the mouse buttons and Q, Space to jump or fly, Shift to move faster… yeah, that all seems okay to me.

That’s not to say they’re better than gamepad, because the controls are still very clearly defined for that particular input device. However, I couldn’t be bothered fiddling with the Steam Controller to make targeting via the trackpad less neurotic and twitchy, and I didn’t have to because the mouse/keyboard controls are entirely serviceable.

They weren’t too bad last time around either, but some more thought has been given to them this time out. Switching target is now bound to mouse wheel up and down instead of tab, for instance, which is infinitely preferable considering the mouse wheel itself is the target lock button. Not everything is great by default (changing descend to CTRL is practically essential, because having it set to ALT is far from ideal, and as CTRL is a pretty common key for crouching anyway…) but I found the mouse and keyboard controls to be workable and playable. 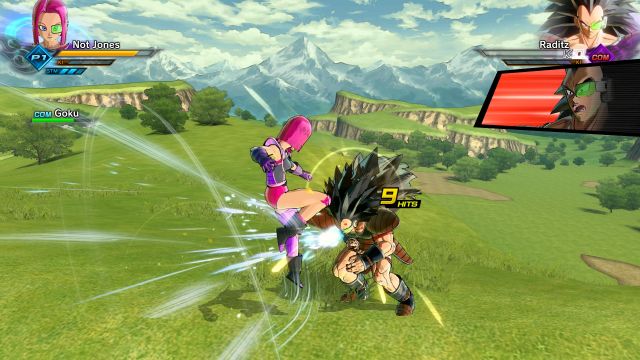 This knee to the face brought to you by mouse and keyboard controls.

That said, because the mouse and keyboard controls have been reworked pretty heavily, any muscle memory you have from the first game will screw you over.

And alas, they’re still not perfect. A few of the problems from Xenoverse still persist into Xenoverse 2: there’s still no mouse support in menus, for instance, and you’ll still use the arrow keys and Return instead of WASD and your Interact key to move through them. Something I don’t remember from the original game is that Q is the button to talk to people… but Q is also the rapid text skip button, with Return being the normal “Yes, I’ve read this, next line please” key. In short, you’ll still need three hands for navigating the menus and the non-combat sections of the game, but you at least only need two for the gameplay itself. 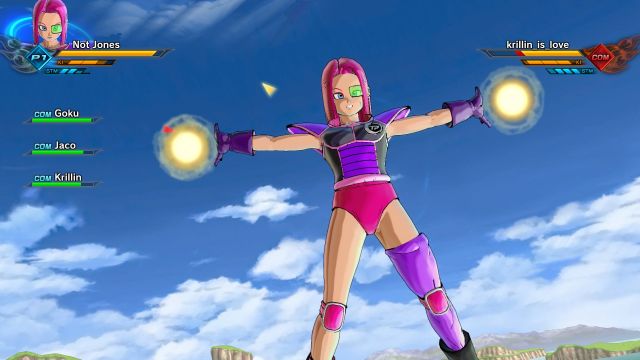 This is an aside, but I actually didn’t know dragons had so many balls. I can understand why they’d be happy when you return them, though.

In general technical terms, I don’t have too many complaints. The game runs fine at 60 FPS regardless of the settings I use, but that’s probably not surprising for a an i7-3820 with 16 GB RAM and a GeForce GTX 970, as it’s hardly the most graphically intensive thing. It does have one hilarious bug in that taking a screenshot while moving through the game’s hub town caused me to fall through the floor until I respawned in town a few seconds later, but for all I know that’s a direct reference to Dragon Ball Z. Maybe a character gets his picture taken and it causes chaos. Who knows? 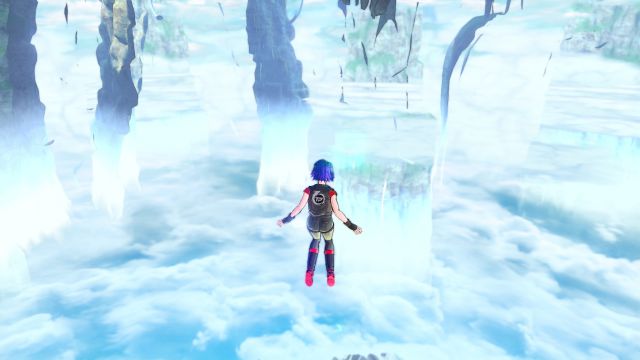 In fairness, if I had the option to angrily sink through the floor whenever someone took my picture, I’d probably take it too.

95% of the time it also picks up on what control scheme you’re using and presents you with the appropriate hotkeys, and it’ll automatically switch these over if, say, you decide to pick up a gamepad halfway through a conversation and start using it immediately. After a couple of hours, I’ve only once seen it display a gamepad button prompt while playing on mouse and keyboard.

There’s one thing I’m very wary of, mind you. Remember this from Dragon Ball Xenoverse? 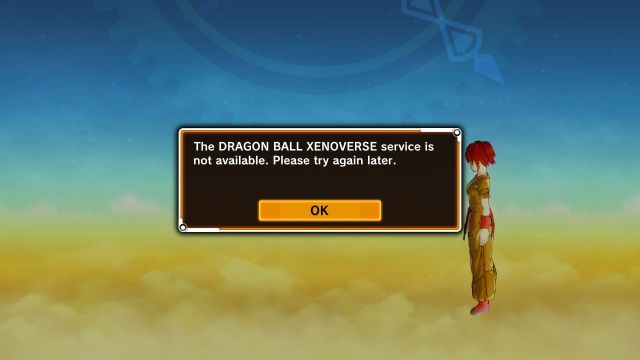 I should probably have included some sort of warning about this screenshot earlier in the piece. (And for clarification’s sake: yes, this is a picture from Xenoverse 1, not Xenoverse 2.)

Yeaaah. Most of my play has been prior to the game’s official launch (I’ve only spent about 20 minutes with it post-launch) so I have no idea if this problem is going to pop up again. Right now the servers seem fine – and they’ll hopefully remain that way – but I wouldn’t be entirely surprised if, at least once over the next few days, people start seeing that dreaded message again. And no, I’m afraid I have no idea how the netcode is at this point.

Technical stuff aside, I suspect Dragon Ball Xenoverse 2 will please fans of the Dragon Ball franchise. It once again lets you create your own protagonist, interact with favourite characters, partake in favourite battles from the series thanks to the time-travelling plot, and basically insert yourself into the Dragon Ball world. I can’t speak too much to the combat system itself; it seems fairly simplistic, but I suspect the constant stat gain and unlocking of moves means that there’s some degree of depth for those who really want to delve into that side of things. Still, it definitely seems more like one for the fans than one for the fighting hardcore.

In short, it’s an okay port. Not an amazing one that’s super-focused on the PC, but certainly not a terrible one that’s been roughly shunted onto this system without any sort of care and attention. If you were satisfied with the original game’s PC port then I doubt you’ll feel any worse about this one; if you haven’t tried that, then you don’t really need to fear this too much. 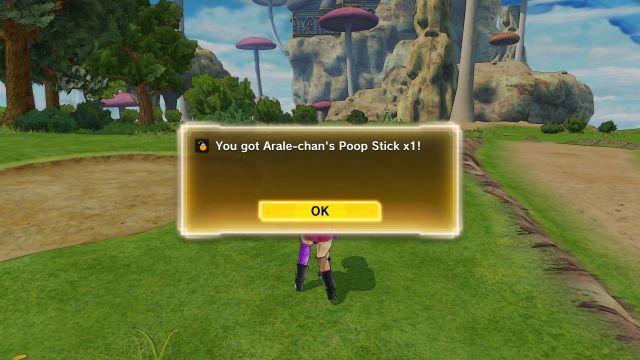