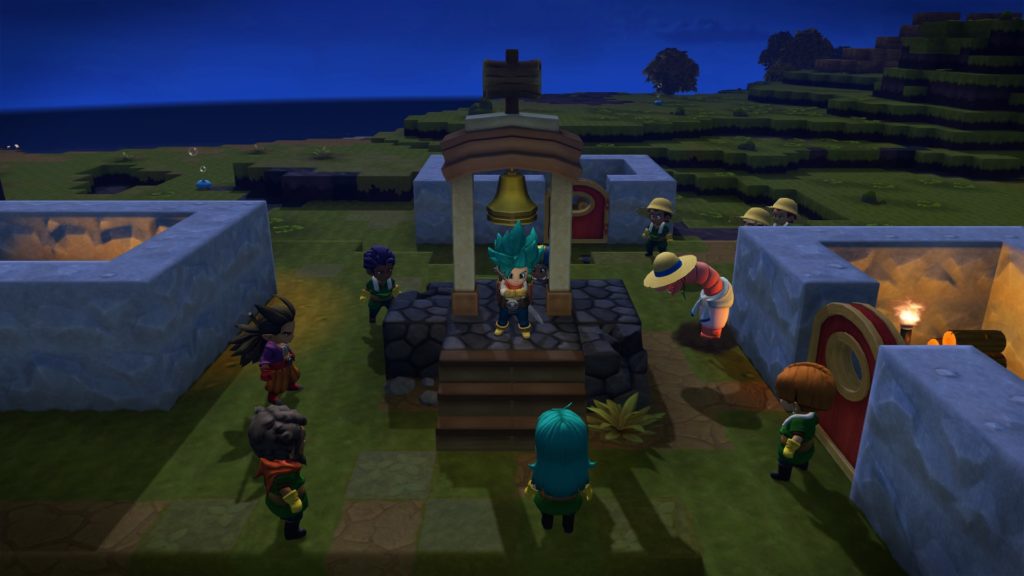 When a game gets as big and influential as Minecraft, there are going to be some copycats. At first glance, Dragon Quest Builders 2 appears to be a clone strung together with elements from the mainline entries in that franchise. But truthfully, it’s so much more. It was a pretty long wait for the game to come to PC, but it was more than worth it, as it’s one of the best of its ilk.

Dragon Quest Builders 2 isn’t a story sequel to its predecessor, so there’s no reason to fret about having to play that one first. The game takes place in the aftermath of Dragon Quest 2, picking up after the hero defeated Malroth, the lord of destruction summoned by Hargon. However, Hargon’s followers, the Children of Hargon, have continued to operate and still control various regions. The game puts you in control of a builder who is being held captive by them before a shipwreck drops you on the shore of the Isle of Awakening.

But you’re not alone. There were two other survivors, a young woman named Lulu and an angry man named Malroth. This is, of course, the final boss from Dragon Quest 2, who has lost most of his powers and all of his memories. The three explore the island before meeting the Hairy Hermit, who gives the builder carte blanche to do as he wishes with the island. So, you and Malroth set out to other lands to find settlers willing to emigrate. 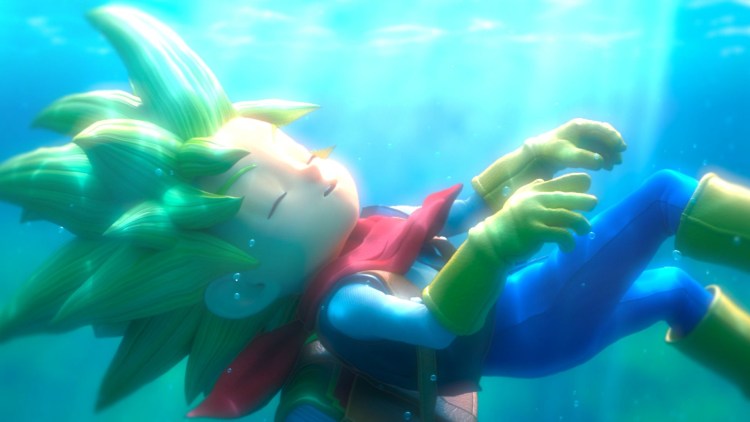 There’s a very large amount of plot and dialogue in Dragon Quest Builders 2. And it’s enjoyable too. It has a large, likable cast of characters and a lot of narrative variety. Plus, it’s often pretty funny and feels rather novel. You go to multiple different islands with their own stories and themes. There’s no voiced dialogue, however, and many of the characters’ lines are written with rural British accents that may or may not wear on you depending on your sensibilities. I thought this was cute at first, but it started to grate a bit after a couple of dozen hours.

The basic structure of the game is pretty self-explanatory. You go to one of the game’s islands, fix up a local town by learning new tricks, and then bring some of the townsfolk back to the Isle of Awakening where you beautify the island and make new settlements that vary based on the skills of the people you brought with you. You then head off to the next island — or spend several hours building whatever you want or gathering resources.

The game’s story missions are fairly linear in that you do quests for people to move towards your goals. For instance, the first island is home to a farm, so quests often revolve around making fields, farm buildings, and planting crops. These quests typically hold your hand, but there’s still plenty of room for experimentation. You might get tasked with building a small room and decorating it with a few knick-knacks. You can do the bare minimum and just put up a short, mostly empty structure. Or you can build an entire second tier underneath the farm and make a sprawling complex. It’s up to you. 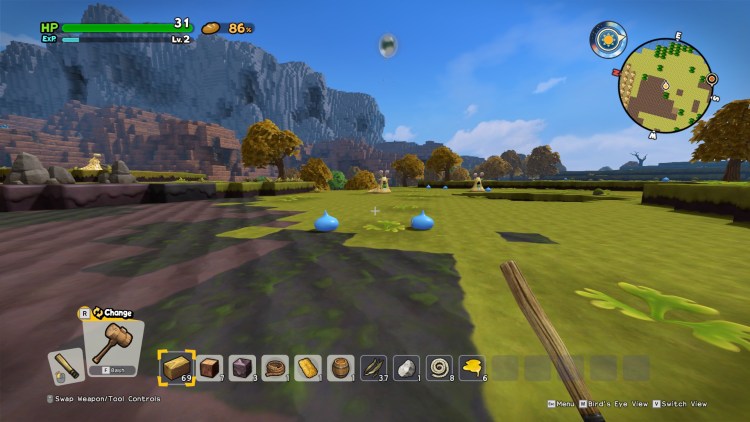 Each of Dragon Quest Builders 2‘s bases, as they’re called, can be upgraded too. Fulfilling requests and building new things for the people to use will result in their dropping hearts on the ground. Once you’ve collected enough of these, you level a base up, which brings in more people and grants you more recipes. Likewise, on the Isle of Awakening you have more freedom, so these hearts are used to unlock new crafting recipes. It’s all part of a very fun, satisfying gameplay loop.

Blocks my socks off

Gameplay in Dragon Quest Builders 2 can best be described as a mix between Minecraft, Harvest Moon, ActRaiser, and The Sims. You can use your hammer to collect blocks and place them where you see fit. One of the few negative things I have to say about the game is that placing blocks isn’t as intuitive as I’d like. It’s not too problematic once you get the hang of it, but it can be a bit awkward to handle smoothly. That being said, it’s still just as functional as its inspiration, with a huge variety of different materials and possible combinations.

There’s also crafting, of course, which is accomplished simply by selecting an item on your workbench once you have the proper materials. But the game is paced in a way that you’re almost constantly seeing and doing new things, plus regularly getting new crafting recipes. The amount of stuff in Dragon Quest Builders 2 is staggering. There are also blueprints for more complicated buildings that work by simply letting you place them on the ground, where they then show you where everything goes. It works very well. 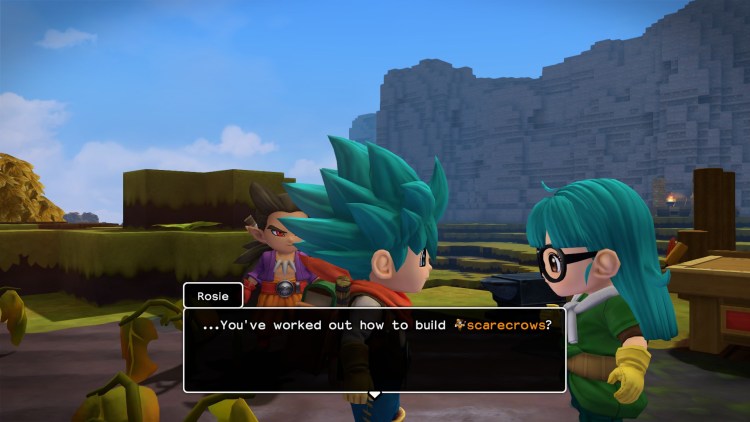 Plus, the people living in your bases will start assisting you as time goes on. On a farm, for instance, people will till the fields once you put a scarecrow down. They’ll plant any crops you put in a nearby chest and then water them. You can set up kitchens for them, and they’ll cook and place the cooked food into a container so that everyone can eat. (You also need to eat.) They’ll sleep in the beds you place. Sometimes you’ll need to build massive structures and they’ll put it together themselves. It’s really quite impressive to see. Plus, there’s combat. You just aim at a monster and swing your weapon till it dies. Malroth always fights with you, and monsters drop crafting materials. It’s pretty much as barebones as it gets, but it’s functional and never much of a chore.

The quality of Dragon Quest Builders 2‘s port is good overall. The game’s frame rate chugs on lower-end hardware if I go all the way with the shadow and view distance settings. However, with those on medium, I got a pretty solid 60 FPS with no real drops in the main game. The frame rate can either be set to 30 or 60 and is not uncapped, so if you were hoping to run it higher, you can’t unless someone makes a mod.

One of the best reasons to pick up the PC version, though, is the controls. The game’s camera can either be first- or third-person, and positioning blocks is preferable in first-person, especially with the added precision that comes from using a mouse. I had to adjust the sensitivity to its fastest setting to make it feel right, but it feels perfectly natural on mouse and keyboard. 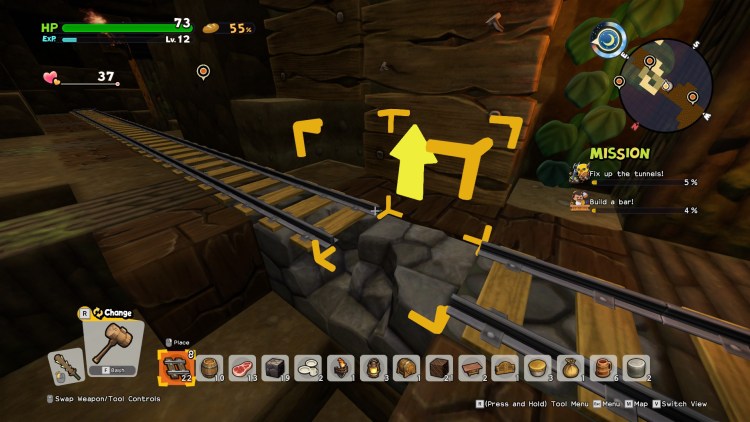 Dragon Quest Builders 2 quite simply has a very, very large amount of content. Simply going through the story alone can take dozens of hours, but there’s more to do than that, of course. You can solve puzzles in every region that reward you with a medal that can be traded for new items. You can complete optional goals on the Isle of Awakening that reward these and more items as well. Plus, there are super powerful monsters to fight, items hidden away in chests and caves, randomly generated islands to travel to in order to unlock some unlimited resources and gather items, and new villagers and even animals to recruit on these islands.

Then there’s the fact that you can not only remodel the Isle of Awakening however you see fit but build entire islands and upload them. Any player can interact with the game’s notice boards and select from a list of other people’s islands to travel to. And the islands people have built on the PlayStation 4 are accessible for PC users as well, which means there are a ton of high-quality islands to explore. Granted, you can’t bring anything back with you, but seeing what other people have come up with is really neat on its own. Plus, you can destroy whatever you feel like if you want.

Questin’ for the best

Dragon Quest Builders 2 is an amazing game with a really solid PC port. Not only is it a really cute game with a ton of content, but it can also easily cater to different people. Anyone turned off by the extremely open-ended nature of similar games might very much enjoy the story focus here, while even fans of open-ended games will still find that this ticks the same boxes as their favorites, just with possibly even more options. I had high hopes for it before starting, but the game still blew those expectations out of the water. 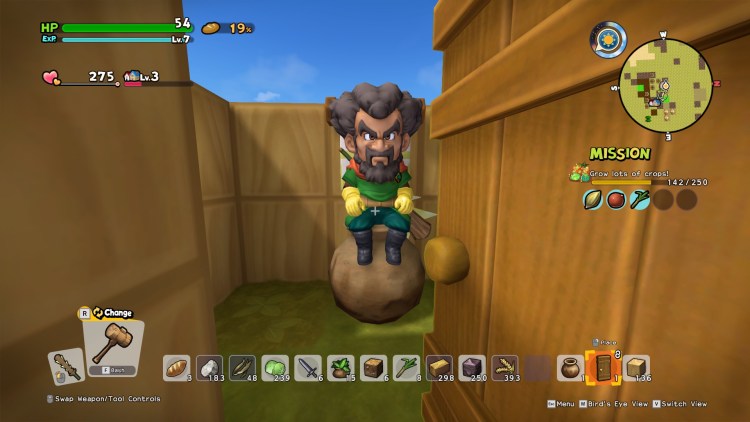 It's rare to find a game that does this much right so often. With a huge amount of content, an entertaining story, and interesting, varied gameplay, Dragon Quest Builders 2 is really an unmissable title for anyone with even a passing interest in games about building.