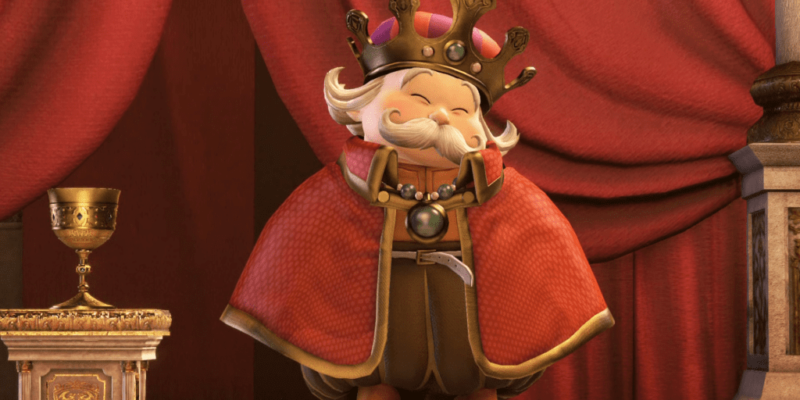 It’s published by Square Enix, but Dragon Quest Heroes 2 has Koei Tecmo (and their Dynasty Warriors division Omega Force) firmly in the developer column. As anybody who has bought a Koei Tecmo PC port in the past few years will know, that means the game’s technical aspects could fall anywhere between ‘disappointing but tolerable’ and ‘eccentric to the point of lunacy’.

There’s always the hope that this will be the one they get just right, of course. But if you were holding out for Dragon Quest Heroes 2 being the first recorded flawless Koei Tecmo PC version on record then I’m afraid I’ve got some bad news. It’s not terrible news, but, well, we’ll get on to all that.

It’s a Japanese game from the Dynasty Warriors lineage (broadly), so naturally it has a separate configuration launcher. Here’s what that looks like. You can click any of these images for a larger version. 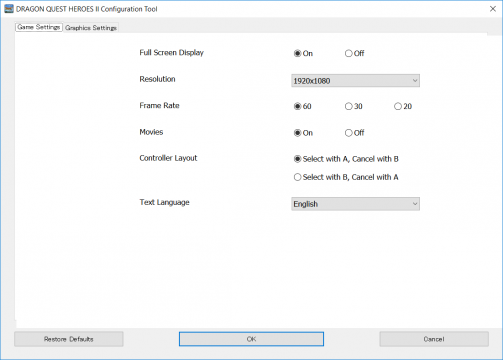 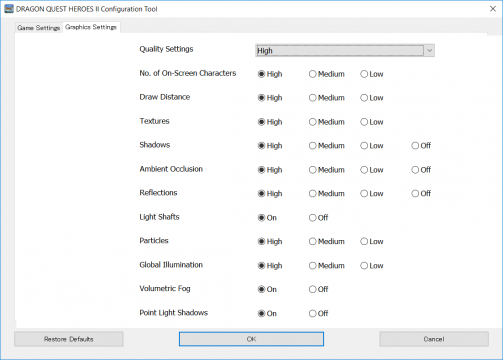 Most of these options appear once you’re in-game, but there are couple unique to the launcher. The A-B controller function stuff is only found here, and so is the text language option.

While we’re in the realm of resolution options, now might be a good time to reveal one of the oddities about this Dragon Quest Heroes 2 port. It does support 4K, but in order to use it you also need to set your desktop resolution to 4K as well (otherwise the game just defaults to the desktop res). The supported resolutions also seem a bit haphazard, as this next image should demonstrate. 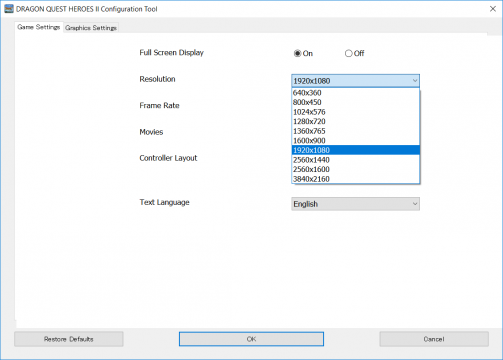 Mostly 16:9 aspect ratios, with the odd 16:10 in there too. But let’s get out of launcher land and look at some in-game menus. 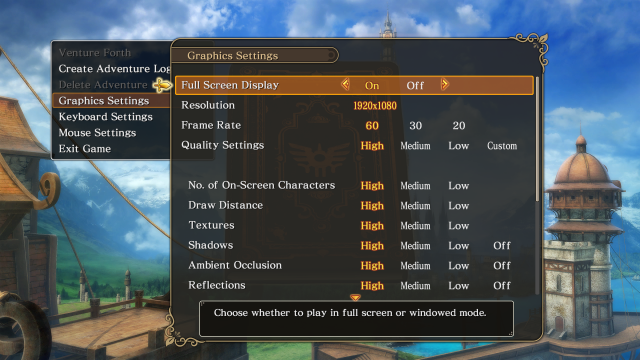 Here are the graphics options again. They’re the same as in the launcher and, as you’ll probably have noticed, Dragon Quest Heroes 2 has a frame-rate cap of 60. It runs smooth at 60, but if you have a 144hz monitor or something then you’ll probably have a little sigh at this decision.

Let’s compare the default Highest graphics settings with the default Lowest in these handy image pairings. They’re all taken inside Arcadia, the first major city you travel to in the game. 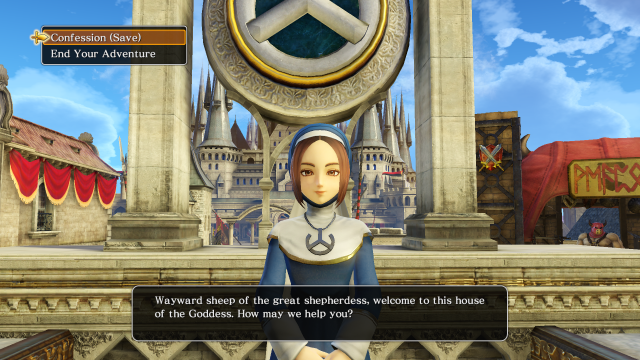 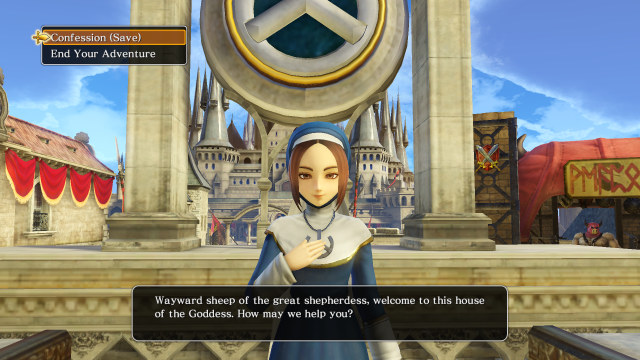 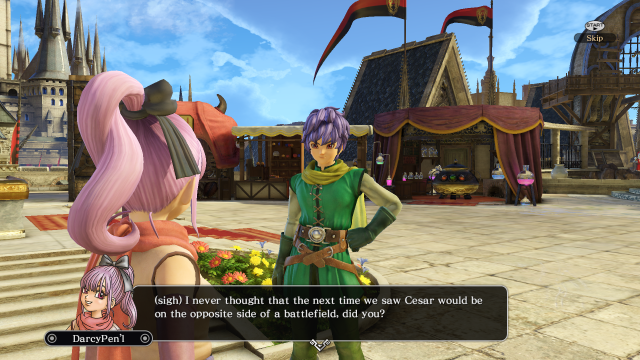 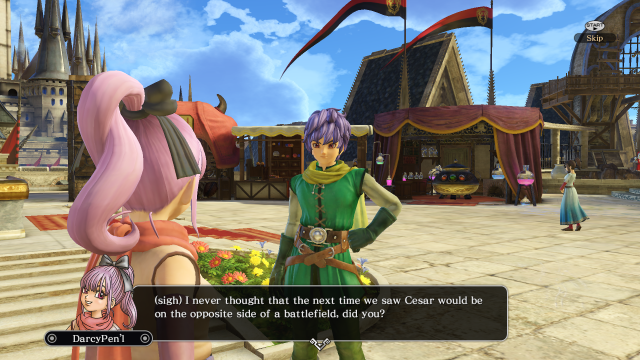 The most obvious differences are the much lower resolution textures on Low settings, and the almost none-existent lighting. Higher settings have some pretty glaring omissions too though; namely any kind of anisotropic filtering and rubbish anti-aliasing. You can at least force some AF through your graphics software, and I’ve seen people passing around a SweetFX profile for injecting some AA so third-party options are available. Not ideal of course, but at least it’s a workaround. Here’s a shot with some AF x16 applied. 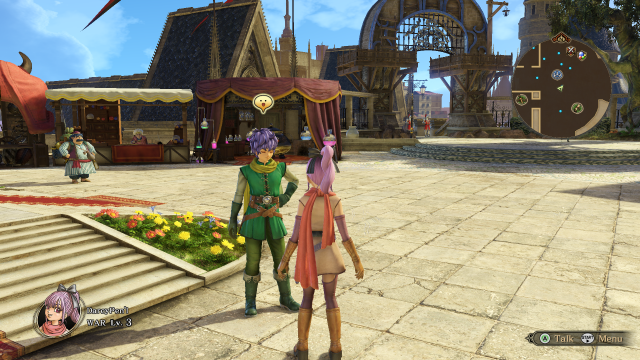 There’s going to be an associated performance cost to any external graphics tweaks you apply, but unless you’re trying to run at 4K or have a pretty old PC then Dragon Quest Heroes 2 isn’t too demanding. If you are just shy of 60fps at around recommended specs, then turning down Global Illumination or turning off Volumetric Fog should help. The latter kicks in on certain enemy attacks and can be a performance drain.

If you’re well over the recommended specs and experiencing frame-drops, then open up YouTube and leave a (paused) video in the background before loading up the game. This sounds like trick akin to “no, you should totally run performance_boost.exe I swear it will work” but it actually does work. In Arcadia I was getting weird drops into the 50s. After alt-tabbing out, popping on a video, pausing it, and heading back in, it was 60fps all the way. 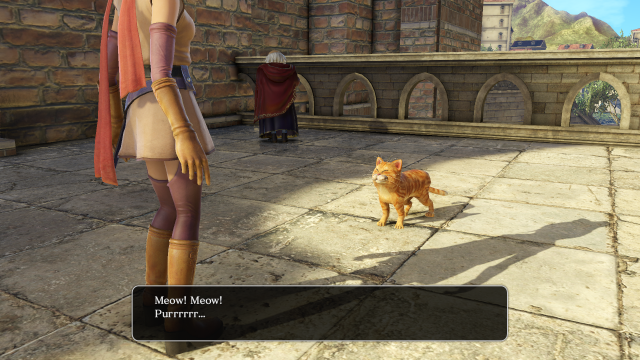 There’s no magic attached to YouTube, obviously. What Dragon Quest Heroes 2 appears to have a problem with is using mid-to-higher-end GPUs to their full potential. Having something extra churning away in the background seems to keep GPU usage from slipping, and keeps the frame-rate up. At least I think that’s roughly what’s happening.

It’s a bizarre workaround, but it does the job. Speaking of which, how does Dragon Quest Heroes 2 handle PC and mouse controls? Let’s have a look. 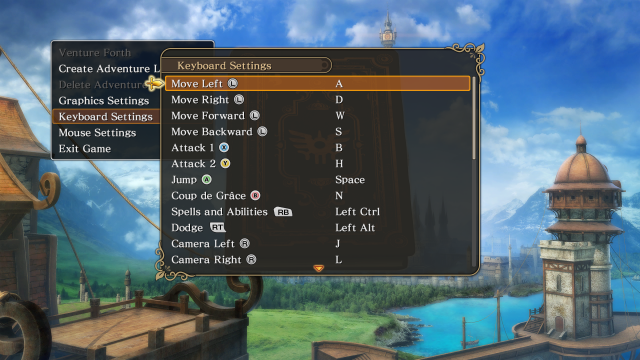 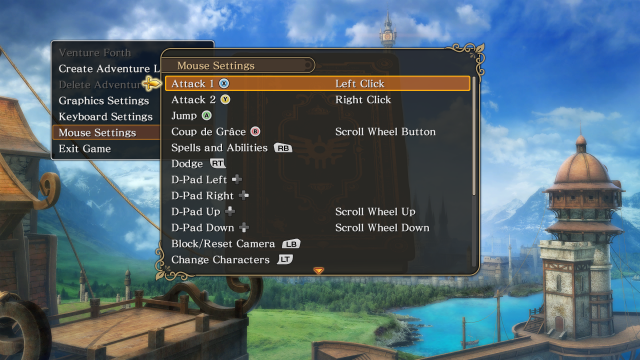 Not too shabby. The main issue with using keyboard and mouse in this game is figuring out where to assign all the additional d-pad controls. Basic movement, dodging, and hitting things works relatively well. But once you add in moving the d-pad around to select and deploy Monster Medals, or doing the equivalent of Skill Menu plus up on the d-pad up to use Heal Stones, things get trickier. You can reassign keyboard commands and various mouse buttons (though I’m not sure how many it supports in total), so it is just about possible to figure out a system.

A gamepad of some kind is going to be the preferred default option for a game like this, though. Not least because in traditional Koei Tecmo fashion none of the button prompts ever change to keyboard/mouse ones when in-game. Good luck remembering what the hell you assigned to ‘Y’ when returning to the game after any amount of time away.

Still, they did include an FOV option of sorts. It’s true, have a look here. 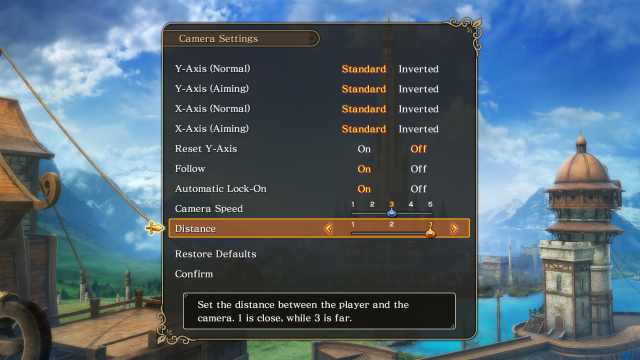 In amongst the camera options (‘camera speed’ here doubles as rudimentary mouse sensitivity) you’ll notice one called ‘Distance’. At the maximum, this pulls the camera slightly further back than the default. It’s not a massive change, but you can see the difference in these shots if you look at how much of your party you can see. 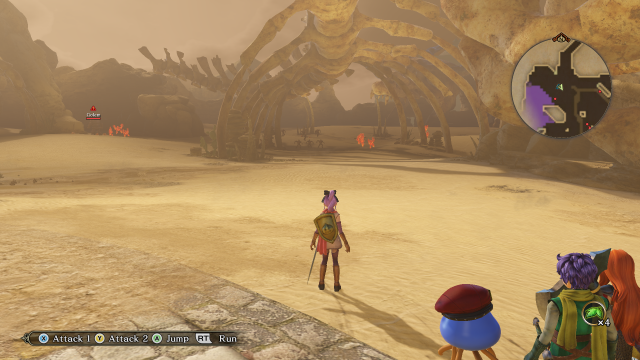 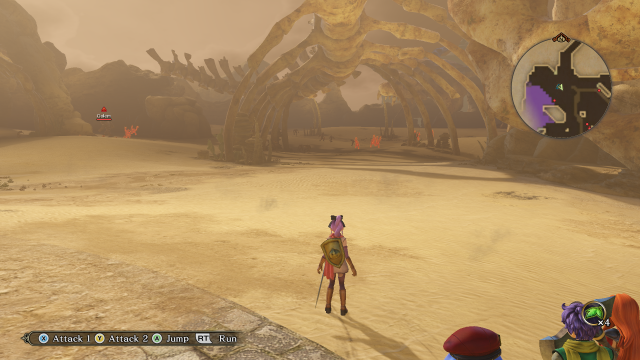 That’s mostly it for options. There is one more menu, in which you can alter helpful things like whether the Coup de Grace moves play a full cut-scene every single time (after seeing them a couple of times, you’ll probably want to employ this). You can also switch between English and Japanese voice acting. Whichever you choose it’s going to be enthusiastic, and, in English at least, full of regional accents; some better than others, but most of them pretty entertaining. 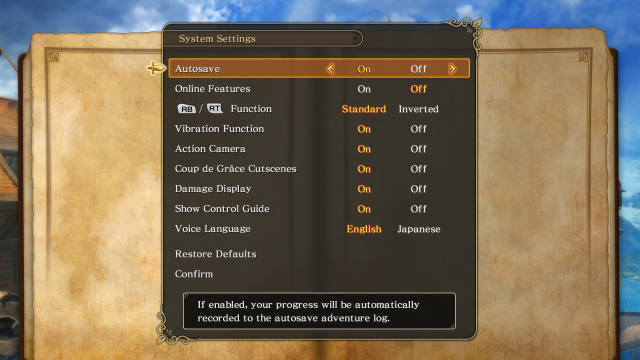 Enthusiastic and entertaining feels like a decent summary of Dragon Quest Heroes 2 itself after the first few hours of play. This is just a port review of course, not a full one, but the sequel appears to be improving on the first outing in a few ways. Monster Medals function in a more enjoyable manner (you can sometimes become the monsters for a bit, which is great), there look to be some actual RPG systems in place this time (using different weapons, switching ‘classes’), and the game is no longer married to endless tower defense levels. Plus, this time you can actually equip items (orbs, say) on multiple characters within the same menu. Praise the goddess.

Port-wise, well, it’s the usual Koei Tecmo bag of surprises. There are workarounds to basically all the problems (the ones I experienced, anyway), but having to actually do that is a bit annoying. Particularly if you’re wanting to play in 4K and have to switch your desktop resolution around whenever you want to play. 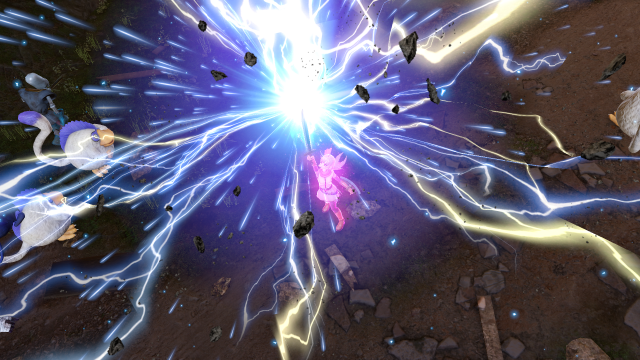 Okay, I don’t know if it’s worth getting THAT upset about.

I’d ordinarily hold out hope for some kind of quick patch to sort out whatever weirdness is happening with the inconsistent GPU usage, but I’m not sure I’ve ever seen Koei patch a PC release for performance issues. If it remains unpatched, people will have to keep relying on bizarre methodologies to make sure the GPU stays awake.

How much further you have to tinker with Dragon Quest Heroes 2 to get it playing to your satisfaction depends a little on your set-up and a little on personal preference. It caters to an audience who sit within or above the recommended specs, will use a standard 16:9 resolution (most likely 1080p), don’t mind that there’s a 60fps frame-cap, and probably own a gamepad. If that’s you, then the port is pretty much alright. 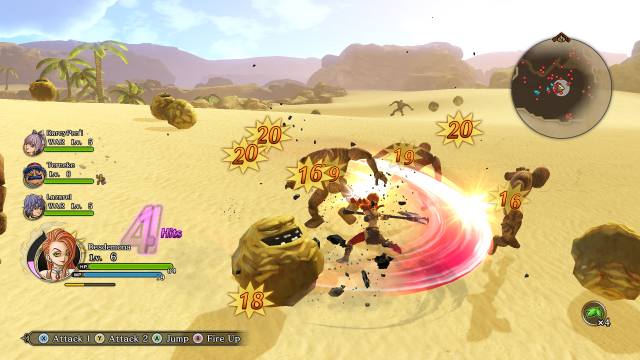 If you’re outside that range, then the risk of running into some of Koei Tecmo’s special port oddities increases. Injecting a bit of AF and AA isn’t too much effort, and gives you a good return in image quality, but faffing about with 4K is currently a bit irritating. Mouse and keyboard are interpreted about as well as they could be without a full UI redesign (unlikely, no matter who was in charge), though still comes off as a secondary control option.

Dragon Quest Heroes 2 is feeling to me like a promising sequel to an already decent first game, but it’s understandable if some of the stuff you’ve read above about the PC version puts you off. Today is not the day I report a glorious Koei Tecmo PC port that goes above and beyond in every department. Like several other Koei efforts before it Dragon Quest Heroes 2 is a port that hits most of the bare-bones expectations, does little to support more specialised demands, and throws in a couple of baffling technical quirks for good measure.