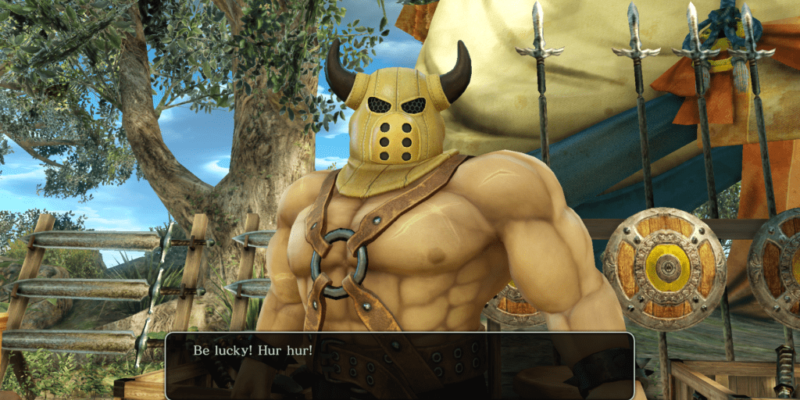 PC versions of games are variable beasts. It feels like there’s a general upward curve in their overall quality, perhaps as a result of companies getting to grips with what an increasingly savvy PC audience expect as a baseline set of options, but few are ever perfect.

At the more impressive end of things, you’ve got games like GTA V (a great many tweakable options, fairly scalable across a range of strong and weaker hardware) or Metal Gear Solid V (somehow holds 60fps, or close to it, on pretty old PCs). Right at the opposite end of the scale there’s stuff like Deadly Premonition (which, granted, apparently crashed all the time on consoles too) and Batman: Arkham Knight (not shy on options, but shy about working properly on most machines).

Then you have the ports that are quite literal, which can be good or bad depending on the source. Dark Souls was pretty much an exact copy of the console release when it came out on PC, right down to a 30fps lock and a maximum resolution of 720p. It was technically better (Blighttown ran properly, for a start), but way below the standards PC players expected in 2013. Luckily, Peter “Durante” Thoman’s ‘DSfix’ mod appeared about half an hour after the game became available and (in time) solved almost everything.

Dragon Quest Heroes (additional control options aside) fits into this ‘literal copy’ category, and whether that’s going to be disappointing or acceptable will depend on what you demand of a PC release in 2015. 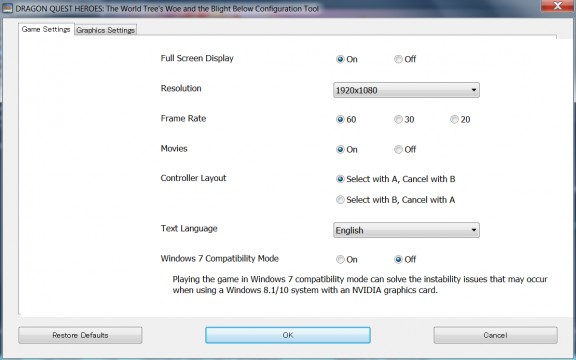 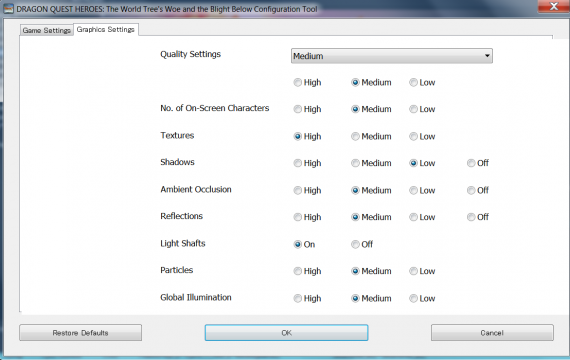 Above, you can see the separate (and optional) launcher settings. The graphical options are identical to the ones in-game, but there are a couple of useful toggles that only seem to exist in this external application.

Being able to choose ‘Select with A, Cancel with B’ for an Omega Force developed, Musou-ish game is surprisingly useful, given how often the reverse is forced in Dynasty Warriors ports. I imagine the Windows 7 Compatibility Mode shortcut is handy for getting the game to run on Windows 8.1/10 too, but since I’m already using Windows 7 I don’t know. 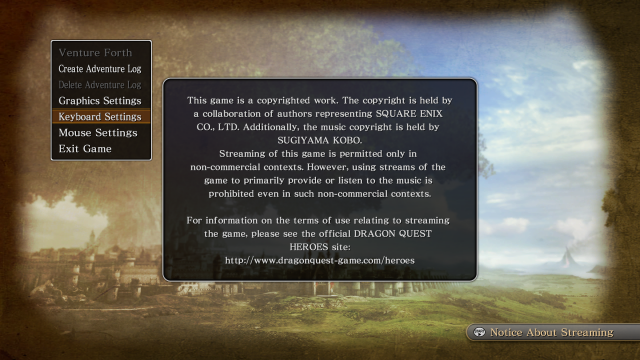 You don’t want to make Sugiyama Kobo upset, do you?

… and the aforementioned graphical options. Now with prettier typeface and stuff. 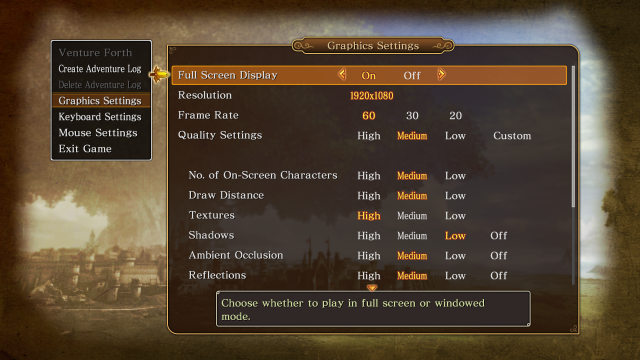 God help you if you need to cap the frame rate at 20.

A few things of note in the graphics settings. Yes, the maximum resolution is 1920x1080p. That’s not going to be enough for some people. It is for me, because my monitor tops out at 1080p, but if you regularly play in 1440p or above I can quite understand being irritated by this restriction. Especially as I imagine allowing arbitrary resolutions can’t be that much extra work. Same goes for the FPS cap, which tops out at 60. For a lot of people this will be just fine. For others, it won’t be enough.

I’d say there’s a possibility that Kindly Uncle PC Modder™ may find a way to unlock both of those things in Dragon Quest Heroes, but it would’ve been nice if Square, Koei or Omega Force had done it for us, eh?

Putting this port into some series context, though, this is probably the best Musou-style PC version to date (perhaps due to it being co-published with Square rather than Koei alone). Previous Dynasty/Samurai Warriors releases have been weird hybrids of PS3 textures and PS4 draw distances, whereas Dragon Quest Heroes is a PS4 port right the way through. Unfortunately that also extends to the resolution and frame-rate limits.

There are no native Anti-Aliasing options either, so if you want any of that jaggy-bashing business, it’ll have to be forced through external GPU settings. 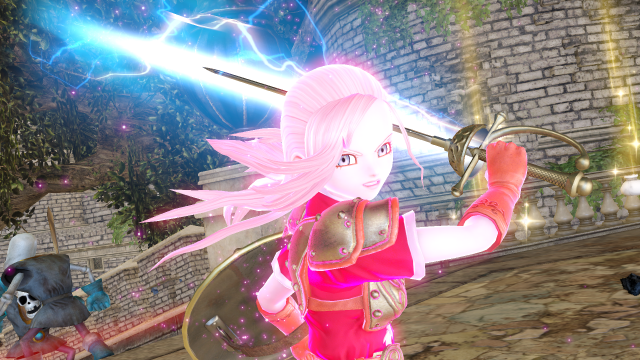 No amount of weird purple glowing effects can hide those jagged edges.

The game decided my i3-2100/8GB/2GB 7870 machine should handle Medium settings (or it just defaults to medium, I guess), but the reality seems a bit more complex. Dragon Quest Heroes recommends a “Core i7 2600 3.4GHz or better” which, while almost certainly overkill in the cores department, probably explains why I seem to top out at about 50fps no matter which graphics settings I apply.

There is of course a bit of variance between lowest and highest default settings, but the 35-45 range at ‘maxed’ settings (based on levels from the first couple of hours of the game) weren’t very far from what I was getting with everything set to low.

Since sacrificing GPU-taxing effects doesn’t result in many extra frames, that suggests some kind of CPU bottleneck. It’s pretty playable on this PC and the frame-delivery feels relatively smooth even in the 40s, but it seems like some sort of i5 (or a more modern i3, perhaps) is probably going to be necessary if you want to hold 60fps.

I’ve only got my own machine to test on, mind you, so that’s just my best guess. 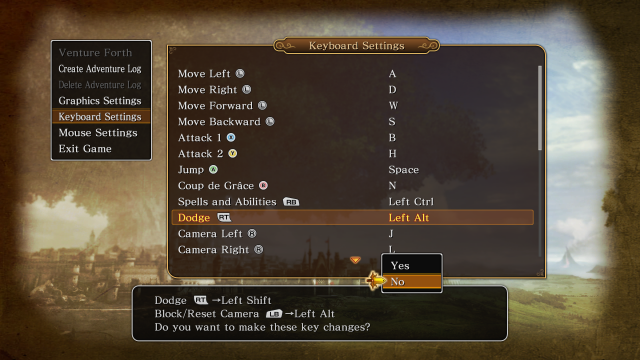 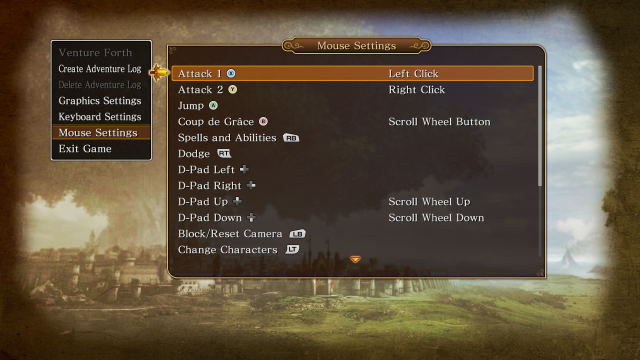 And here’s a few mouse options too. Why not, eh?

Control-wise, it’s probably no surprise that a popular controller of some sort is recommended. The mouse and keyboard controls are there, they’re serviceable, but there are sufficient quirks that I’ll be sticking with my old 360 gamepad for this one.

Dragon Quest Heroes is finally, finally a Koei-ported game that manages to show gamepad button prompts correctly. Combo lists show X, X, X, Y rather than a bunch of vague little icons depicting weak/strong attacks. Sadly, this courtesy does not extend to those playing on mouse and keyboard. Even with my 360 pad unplugged (and the game reloaded), I was still getting controller prompts instead of keyboard ones.

That makes certain actions a bit of a memory test. After pulling up your spells with Left-Alt, can you remember what ‘B’ relates to on the keyboard? It’s ‘N’ as it happens. Which is a pretty terrible default set-up, unless you have massive, Stretch Armstrong hands. Fortunately, you can rebind things like this, but you still need to be able to recall the new set-up from memory.

It’s a bit like one of those scientific tests where the word ‘Green’ is spelled out in bright red; you have to see that gamepad ‘B’ and think “wait, no, I bound that to F”. 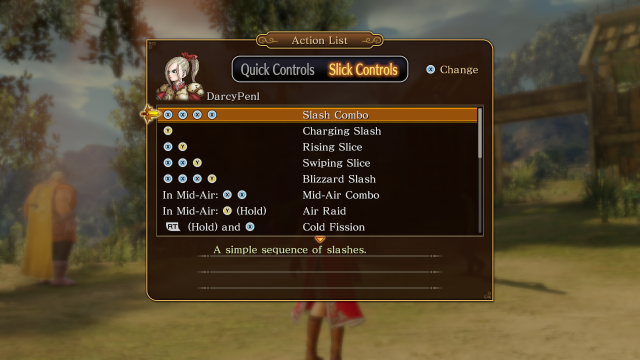 Initially, it looked like there were no mouse sensitivity options, but once you start up the game you get access to a few more options like those shown above. Camera Movement Speed is basically your mouse sensitivity (not as good as a slider, but much better than not having the option at all).

Menus (such as they are) have no mouse control, and, minor though it may be, it was annoying to find that I couldn’t input my character name with the keyboard. You can switch between controller and mouse/keys on the fly during levels though.

So yes, gamepad still recommended. The mouse/keyboard controls themselves are pretty tolerable (once you’ve rebound some of the stranger choices), but the lack of accurate button prompts will likely throw you off for a while. 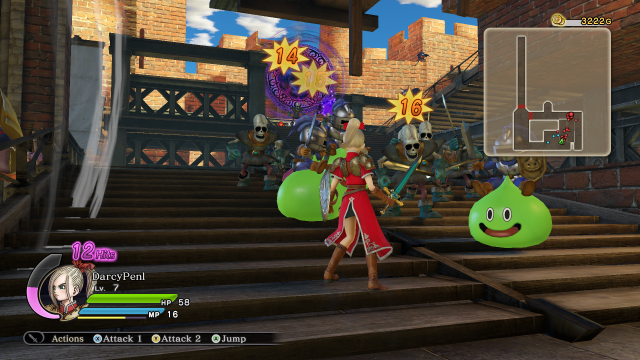 All of you guys are far too cute to murder.

The novelty may eventually wear off, but for now I’m really enjoying a Musou-style game where the monster design includes things like ‘tiny knight riding an ecstatic green gumdrop’ and ‘adorable demon-bat creature’. Toriyama’s human designs are bit none-more-anime for me, though the characters themselves seem decently silly so far. I like Aurora’s no-nonsense desire to rush in and twat some monsters, and King Doric appears to have been designed around the collected works of Brian Blessed. Two solid choices for Musou characters, there.

So far its been goofy, slightly absurd, and full of interesting, colourful creatures to mash through. The appearance of a ‘boss’ or two bodes well for the need for some actual strategy, too. 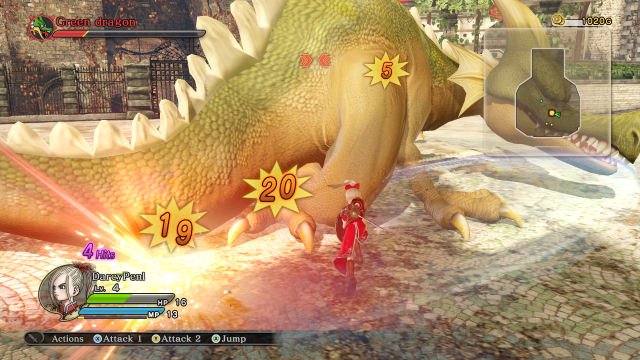 As it happens, the Dark Souls strategy of “poke it in the back leg” worked pretty well here.

On the port side of things, Dragon Quest Heroes is … mostly fine, with a couple of obvious flaws. The resolution thing is going to (reasonably, I think) bother a lot of the higher-end set, and, really, PC games should provide fluid resolution options just on principle. Taken in the broader context of an extended trail of fairly disappointing Tecmo Koei Warriors ports, though, it’s quite possibly the best one yet. Proper PS4 assets instead of a mish-mash of PS3 stuff, and no cut features (I was worried co-op had got the axe here, but apparently it’s just not in any version of the game). Still room for improvement in terms of catering to the PC player-base, certainly, but at least these things are gradually getting better rather than worse.