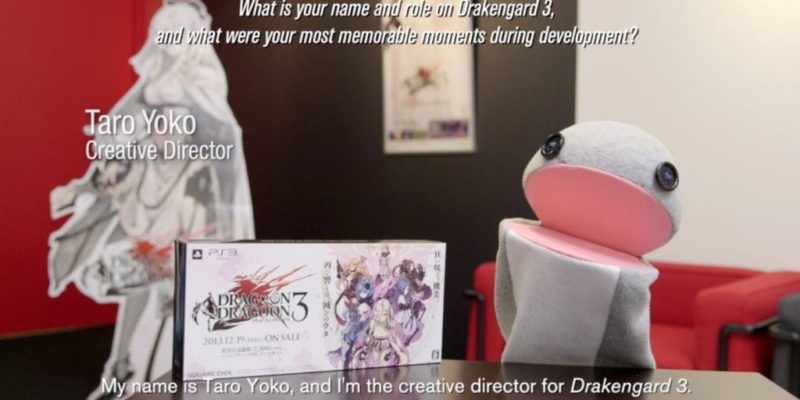 Exclusively for the PlayStation 3, the prequel title to the original Drakengard is set within a medieval world.  Here, six goddess-like sisters known as “Intoners” undo the peace they brought to the land as the eldest sister, Zero, undertakes a murderous campaign to destroy her younger siblings.   With a story that offers many twists and turns, players will find themselves unraveling the mystery of Zero and her true intentions.

Creative Director Taro Yoko explores why a video game protagonist defeats hordes of enemies in the special launch day video interview. He recounts how he has sought to resolve this question throughout the Drakengard series as well as the spin-off title NIER.

Fans of the franchise will be able to experience the director’s vision in its entirety via downloadable content (DLC), previously in the Collector’s Edition with the game for $64.99, exclusively on PlayStation Network. The new Digital Collector’s Edition includes One’s Prologue, Japanese Voice Pack, the NIER Costume Pack, Mikhail’s (the dragon) Giant Baby Hat, Caim’s Garb, and six PlayStation Network themes.

Individual DLC is also available, including the Japanese Voice Pack, Manah’s Garb for Zero (from Drakengard 2), two music remix packs that change certain tracks in the game to either the original Drakengard titles or NIER. More DLC is planned to be available soon, including the Intoner Sisters’ Prologue stages.

Drakengard 3 Standard Edition for the PlayStation 3 system is available for $49.99, as well as a digital download on the PlayStation Network and Square Enix Online Store.