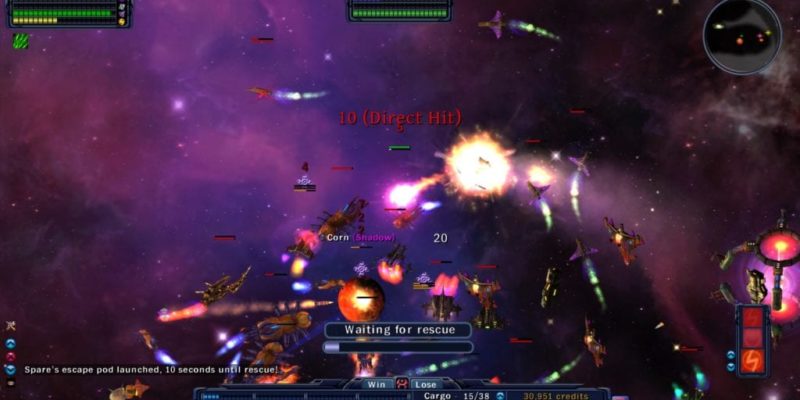 Of all the action-RPGs I played in 2012, Drox Operative was by far the most interesting. Since those twelve months also saw the much-hyped Diablo 3 and underdog favourite Torchlight 2 cross my hard-drive, that’s not bad going. Especially for a game that lists just seven people in its credits.

As it turns out, Steven Peeler’s Soldak Entertainment has a bit of an underground reputation for doing something special with the standard aRPG model. I’ve not had the pleasure of playing Soldak’s previous release Din’s Curse, but by the sounds of things it gathered a fair bit of critical praise for its implementation of dynamic towns.

Well, Drox goes one better than that. How does a dynamic galaxy sound?

Your role in Drox Operative is something akin to being a member of the space-Illuminati. Although you’re given the starting choice of any of the ten races in the game (which makes minor differences in terms of starting gear and ability bonuses for your craft,) you ultimately have no loyalty to your own kind. You are an operative of Drox and you work for them alone. Any quests you undertake, any actions you perform, any alliances you forge should be for the furthering of the Drox agenda.

Every portion of the universe is divided into procedurally generated sectors, joined by starlanes, jump gates and (at times) unstable wormholes. Sectors are populated with members of the various in-game races, who go about their business independent of your activities. They will attempt to expand to new planets, form and break alliances, ask you for aid, trade with other systems and generally concentrate on trying to thrive.

This is all very well, but it quickly leads to warfare, instability and chaos as each race competes for galactic domination. The Drox prefer some semblance of order, and you are their key agent. To that end, your overall goal in each portion of space is to bring about stability (of a sort) by any means necessary.

This may mean victory through economic prosperity, fear, peace or genocide. It’s really up to you.

Against this dynamic backdrop, you perform a bunch of traditional aRPG actions. Your lone spacecraft has a number of equipment slots (light, medium and heavy) in which to install new weaponry, improved shields, better thrusters and all the other conveniences a modern galactic pilot should expect from their vessel. These bits of equipment drop in the form of ‘loot’ from the various pirates and biological space-creatures that you vanquish out there in the anarchist fringes of space.

Blowing stuff up confers experience points, as does performing quests and doing favours for the galactic races you want to boost relations with. Levelling up allows you to improve stock abilities like ‘computers’ or ‘engineering,’ that enable you to install improved equipment on your ship, and ‘command,’ which ultimately upgrades your ship to a new model (usually with more slots to install things in.)

Performing quests for the inhabitants of the sector not only gives you an experience boost but also improves your standing with the relevant race, meaning they’ll be more inclined to make deals with you and perhaps edge towards a treaty of some kind.

Helpfully enough, it’s possible to complete quests without even accepting them. If a race wants you to, say, kill off a certain pirate craft and it turns out you’ve already done so, it’ll be possible to turn in that quest for the reward. Thanks to the dynamic nature of things quests can also be failed, such as when you turn your back for too long and the planet you were supposed to deliver goods to gets destroyed.

Like all aRPGs there can be a bit of a grind for experience points, but Drox Operative is thoughtful enough to offer several levels of customisation to mitigate this. These range from faster collection of experience points, to the more masochistic options like enemies that are twice your level. Even with these tweaks, however, the randomised nature of the game means there’s a chance that some areas can turn into a minor slog.

Once you do ‘succeed’ in a given sector, you’re given the option to move on to the next. Everything you did to your craft will carry over, as will any goodies you gathered and put in your stash. Your character is permanent; but the rules, size and density of each sector can be (somewhat) determined by the player before they enter.

That all may sound like a lot to deal with, and Drox Operative can feel overwhelming at first. There’s a basic, text-based help system that’ll give you an idea of how to find your way around the (rather ugly) user interface, but early on it can seem as if you’re being flooded with messages and prompts that you can’t do much about. You’ll come to learn that this isn’t necessarily a problem, but it can take a while to ‘un-learn’ the RPG lesson of needing to complete each and every quest as rapidly as possible.

It pays to remember that you are the arch manipulator. Your role is to nudge feuds, alliances and galactic relationships in the ways of your choosing. Not all quests will benefit your long-term goals. Why help a race terraform a new planet if you’re scheming for their destruction?

The combination of aRPG staples and light strategic interaction works a treat. It gives each ‘campaign’ (for want of a better term for the time you spend in a specific sector) a sense of individuality and purpose. You’re not just grinding away to level up (though that is helpful) and solve quests (those help too), but you’re truly roleplaying as a devious agent of the space-Illuminati.

Maybe you’re a back-stabbing treaty-broker, ostensibly uniting the races while working in the shadows to ensure a brutal coup against one of the unfortunate coalition members? Perhaps you’re a ruthless mercenary, subjugating each race to your will through a campaign of fear? Or are you a noble operative, hoping to win the galaxy over with your feats of daring do and meticulous eradication of pirate insurrections (which, if left unchecked, really can spill over into a galactic problem)? All options are open to you.

The addition of a dynamic galaxy and the ability to dick around with the various components within it takes Drox Operative to new, fascinating places, beyond the scope of most aRPGs. In other words, it’s more than just a Pavlovian time-sink to accompany your eyes and hands while you knock off your backlog of podcasts. This is the direction in which I want to see more aRPGs taken; marrying established conventions to a wider context and broader ideas.

It’s tremendous stuff, and I urge everyone to at least give the demo a try. That way, when one of the big-budget aRPG releases of the future steals this concept and starts hoovering up critical adoration, you can be right there in the vanguard of smuggery saying “Of course … Soldak did it first.”

Drox Operative shows that innovation in the genre doesn’t have to be limited to twiddling around with how skill trees work, or crafting the perfect loot drop percentage; it can also be about introducing smart mechanics that give a renewed sense of consequence and purpose to a player’s actions. If you can get beyond some rough edges, you’ll find an aRPG quite unlike any other.

You can find Drox Operative at GamersGate, or buy it direct from the Soldak site.

Double Fine has requested papers from the THQ bankruptcy case

By Steven Wong8 hours ago
Hardware