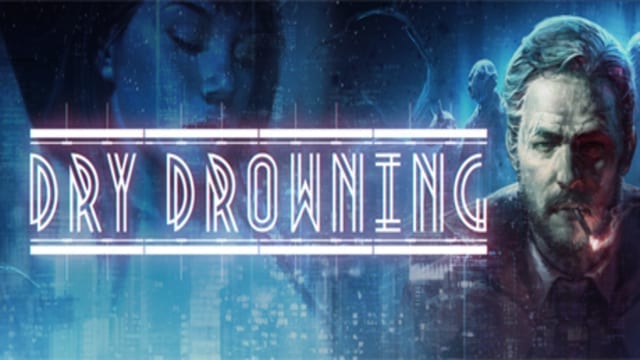 I admit I’m a bit prejudiced against visual novels because I just don’t like anime. I do like the idea of the genre; I just wish there were other types of art and stories to tell with it. Dry Drowning seems to be exactly what I was looking for: an investigative visual novel with a tech-noir art style and setting. It reminds me a lot of Blade Runner, one of my favorite films of all time. If that sounds like your type of visual novel too, Dry Drowning is out today. Console versions are slated for a 2020 release.

You’ll play as a typically noir private detective called Mordred Foley, who lives in a near-future dystopia. Foley is on a mission to take out a serial killer that thrives in a world dominated by dark powers-that-be. It’s a world of tyranny and lust for power. Dry Drowning aims to tackle themes such as racism, immigration, political extremism, and sexism. Foley will take on his detractors and opponents in a thrilling investigation in the streets of Nova Polemos, a fictional city.

Visual novels feature mostly dialogue. Dry Drowning features a system called “masks of deception” that highlights when a character is lying. As you follow the thread of Foley’s investigations, you’ll find it hard to trust anyone. According to the developer, lying is almost second nature to the people of this world. That’s where the ability to uncover the truth comes in as particularly useful. Another system is called “Living Nightmare,” which allows you to use evidence in horror-style interrogations.

The choices you make in Dry Drowning will matter as you follow through more than 150 story branches leading up to three completely different endings. The game might take up to 20 hours to complete as you explore moral choices that impact character relationships. There is also an elaborate clue system for investigation, and you’ll be able to correlate evidence, items, character biographies, and dialogue. Dry Drowning also boasts a dynamic soundtrack and a balanced combination of Western and Eastern visual art styles. It aims to be a grim futuristic setting where cyberpunk and retrofuturism coexist in harmony.

According to Daniel Falcone, director of Studio V, Dry Drowning draws heavily from what the world is going through today. Nova Polemos is a locked-off city where only the powerful can live a safe and comfortable life. Mordred Foley is meant to be an anti-hero, and as such his moral compass doesn’t have a clear north. Everything you do will have consequences, both good and bad. You could represent a defendant who serves the tyranny of Nova Polemos in order to restore your reputation, but it might also place the people you care for in danger.

Dry Drowning is out on Steam, GOG, Utomik, and itch.io today, and you can try a two-hour demo for a taste before you buy. PlayStation 4, Nintendo Switch, and Xbox One versions are slated for a 2020 release.

What do you think of Dry Drowning? Is it an interesting twist on the visual novel formula? Drop your comments below and tell us what you think!

Giveaway: We have 5,000 beta keys to test out Drone Strike Force, so take one!