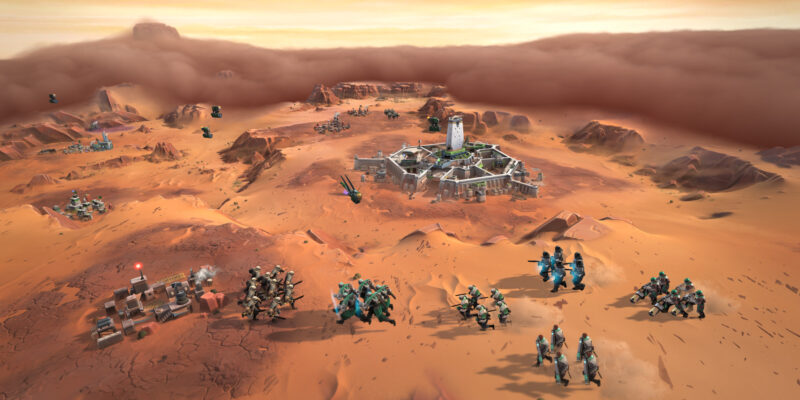 The Game Awards 2021 was so packed with game announcements that there was hardly any time for awards. Not that we’re complaining. New games and progress on titles in development are what we tuned in for. One of the new titles revealed with a trailer at the ceremony was Dune: Spice Wars. You can check out footage of the real-time strategy with 4X elements down below.

The trailer is really more of a teaser. It just shows a battle waging inside a city on Arrakis. You do get to hear the various houses proclaiming their rights and intentions, including House Atreides, House Harkonnen, and the Fremen. And you can see a worm briefly launch out of the sand.

As you would imagine, Dune: Spice Wars is set on Arrakis —  that’s where the spice is. So, that’s where the money is. You will be able to play as one of several factions, but the only two revealed so far are House Atreides and Harkonnen.

Since Dune: Spice Wars includes both RTS and 4X gameplay elements. You will be able to battle enemies with your troops, dominate them with your economic strength, outwit them with political maneuvering, and undermine them with a network of spies. But never forget about the sandworms. All your carefully laid plans (and troops) can be wiped out in an instant if one of these gigantic creatures decides to surface.

You will be able to use the iconic ornithopters to scout the landscape, revealing new points of interest that may include resources or villages. As you strengthen your grip on Arrakis, you’ll be able to expand further and grow in power.