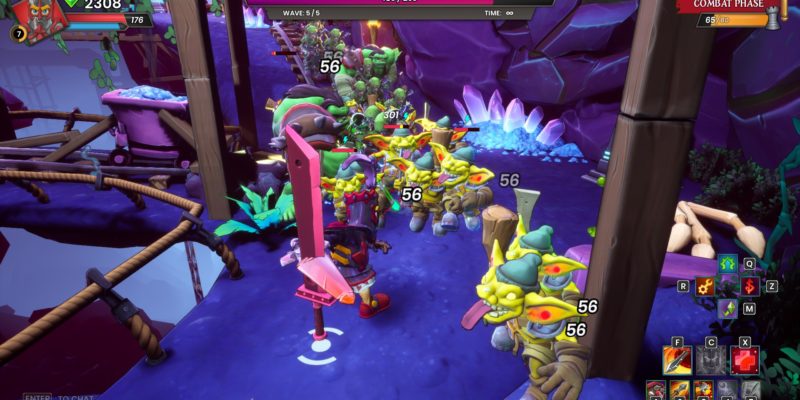 Hacking away at waves of enemies while trying to protect your base is a constant presence in gaming. I usually don’t bother with tower-defense games, but I like co-op action RPGs a lot, so Dungeon Defenders: Awakened met me halfway. It entered Early Access today, so there’s still a ways to go until it’s finished, even if a large amount is already in place.

Wait, what is this?

The original Dungeon Defenders released in 2011, followed by a free-to-play sequel in 2017. Dungeon Defenders: Awakened is a remake of the first game, now made in Unreal Engine 4. While the originals were made under the label Trendy Games, this one was developed by Chromatic Games. That isn’t to say that it was bought by another company, though. Chromatic is a rebranded Trendy Games after it was purchased from its investors by one of the studio’s original co-founders.

On top of that, Dungeon Defenders: Awakened was funded on Kickstarter, earning nearly half a million dollars and almost doubling its initially requested funding amount. The game has been in beta for some time as well, so it’s very much a later-stage Early Access title that aims to enter full release in the second quarter of this year. 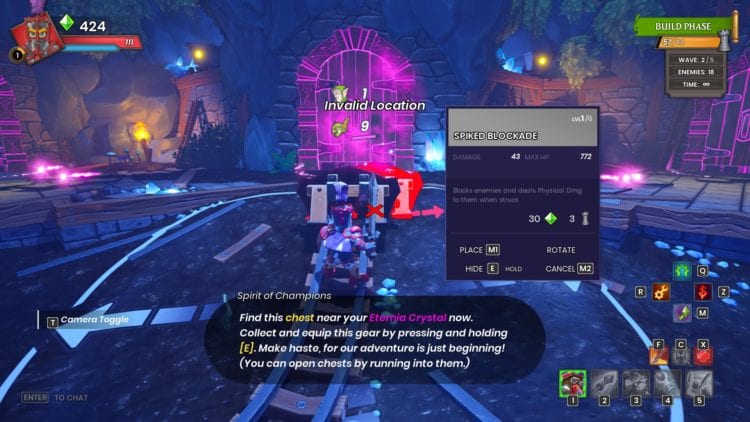 The LOCATION is invalid?! YOU’RE invalid! How DARE you?

If you’re not familiar with the series, it’s standard tower defense fare. A team of up to four players is tasked with defending a crystal from an onslaught of monsters. If the crystal is destroyed, it’s game over. Protecting it requires a combination of players fighting foes in a manner akin to any standard Action RPG mixed with building defensive items around the perimeter.

There are different classes of characters to choose from. The game starts you off as a standard knight who fights with a sword, but you can also play as an elf woman with a crossbow, among others. Each character has special attacks as well. They start with one already unlocked, while the second becomes available when that hero reaches level 12. Enemies drop loot when killed and a chest spawns for each character after each round, so there is constantly new loot to acquire and equip. Any loot left on the ground when a new round starts will get auto sold in exchange for gold.

Every time a hero levels up, they gain three rune points that you can place into one of six categories that make them stronger. These naturally included increases to attack, building speed, and usage of special abilities, among others. These abilities are governed by an energy meter that gradually refills. You also use this meter to heal your character in the middle of battle. 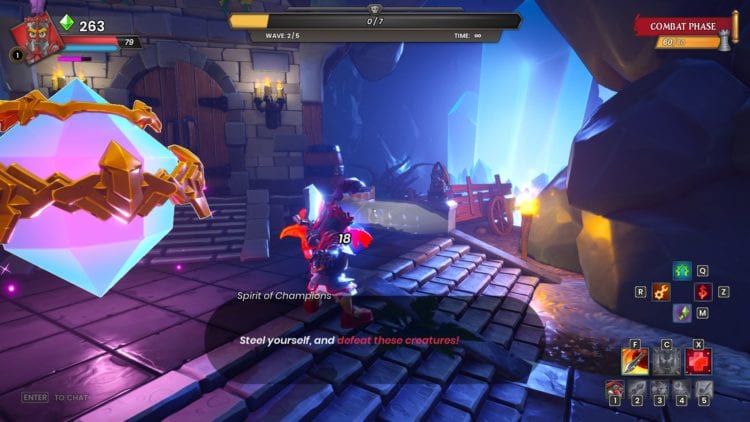 Praised be the crystal. Guard it with your life, lest your friends become, like, real mad at you and junk.

As Dungeon Defenders: Awakened is a tower-defense game, you’ll also need to build devices to protect yourself from the enemy waves. Two of these are available initially, with the other three unlocking later. The first two are spiked barricades and turrets. You simply place these at chokepoints around the map to slow or kill monsters and protect the crystal. Every wave rewards you with material you can use to build new devices.

There are currently 12 maps in Dungeon Defenders: Awakened, with another few coming later. These must be unlocked in the game’s campaign mode, which features five waves of enemies. Once a map is cleared in campaign mode, it unlocks for survival mode, which is 25 rounds and where you’ll spend most of your time in this version of the game. These are the only modes currently available, but challenge and strategy modes are set to be added later, along with a hardcore mode. 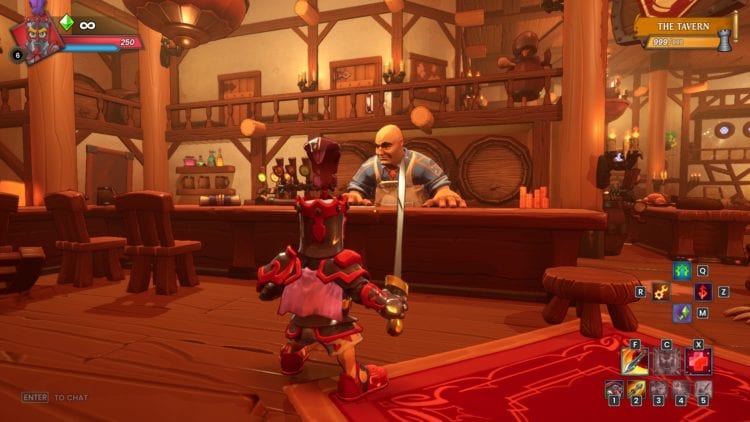 You pick your mode in the tavern. There’s also this guy. He doesn’t say nothin’. He’s got an empty bar to tend to, after all.

The game has four difficulties now, and much like most other aspects, more will be added in time. Chromatic Games is similarly adding more weapons and enemies, so Dungeon Defenders: Awakened still has a fair amount of content that has yet to take shape. The game is priced at $40, which will not increase at full launch.

Dungeon Defenders‘ combat is simple yet effective. It doesn’t feel amazing or anything, as it isn’t trying to be a full-on intense action game, but it’s serviceable. Early waves may feel rather dull as you wail on slow enemies that don’t pipe in very quickly. But it can ramp up fast. I lost on my first attempt of the second campaign map because the first four waves of enemies were so slow and easy that I didn’t think things would massively pick up on wave five.

But boy, was I ever wrong. On the fifth wave, a massive amount of enemies came pouring out and obliterated the meager defenses I’d set in place. Oops. Still, I was very surprised by how many enemies the game started throwing my way. The earlier waves were almost sleep-inducing, only for it to become Dynasty Warriors but with actual danger. Still, I’ll be more on my toes in the future. 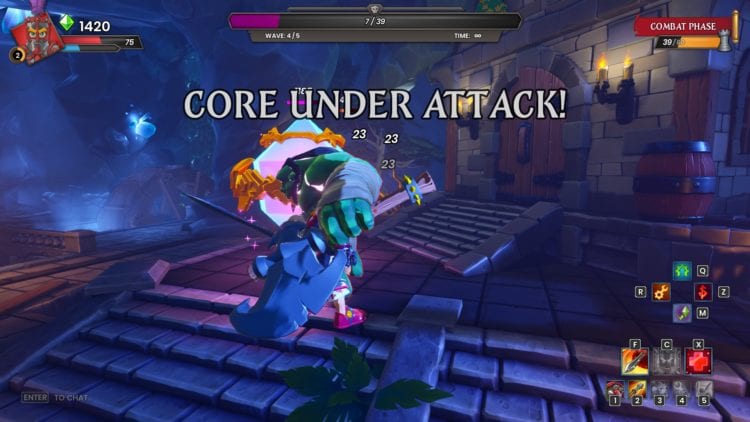 I was able to try co-op, but with some serious issues. I sent an invite, but the person I sent it to was just taken to a map screen and couldn’t join the match properly. I’m not sure if other people can’t join matches already in progress or not or if this was just a glitch. They also had some serious performance issues with the game on lower-end hardware. They described it as “stuttering so badly that it was basically unplayable,” which is curious for a game that doesn’t appear to be at all demanding.

Then, during one of the enemy waves, an enemy exited a door but was incapable of navigating out of the barrier directly outside of it. We waited a few minutes, but it became impossible to continue playing and we had to abandon the map.

Additionally, while Dungeon Defenders: Awakened can be played with a gamepad or mouse and keyboard, I had some serious issues with the former. For starters, I couldn’t heal with the gamepad at all, nor could I select a mission or equip new items. Any time I wanted to do those things, I had to use the mouse and keyboard, as the gamepad prompts wouldn’t do much of anything. 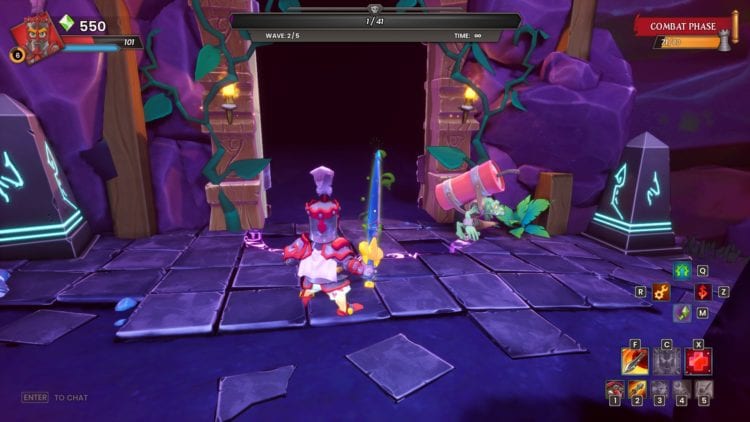 So, you’re, uh, not coming out of there? I really need you to, otherwise I can’t keep playing, sooooo… Great, thanks.

Dungeon Defenders: Awakened is a promising game. I find it fairly enjoyable, and it appears to have a solid gameplay loop and a large number of maps on offer. But some issues need to be worked out in the next few months or else some people are going to be rather frustrated. Especially in regards to the bug that trapped an enemy and forced me to give up a mostly-complete map.

Even so, I’m looking forward to putting some more time into this. Check back in a few months, and we’ll likely have a full review when the complete game launches then. Until then, hang back, level up your characters, and curse the lack of healing functionality on gamepads while angrily pressing X on your keyboard instead.

By Steven Wong21 hours ago
Previews