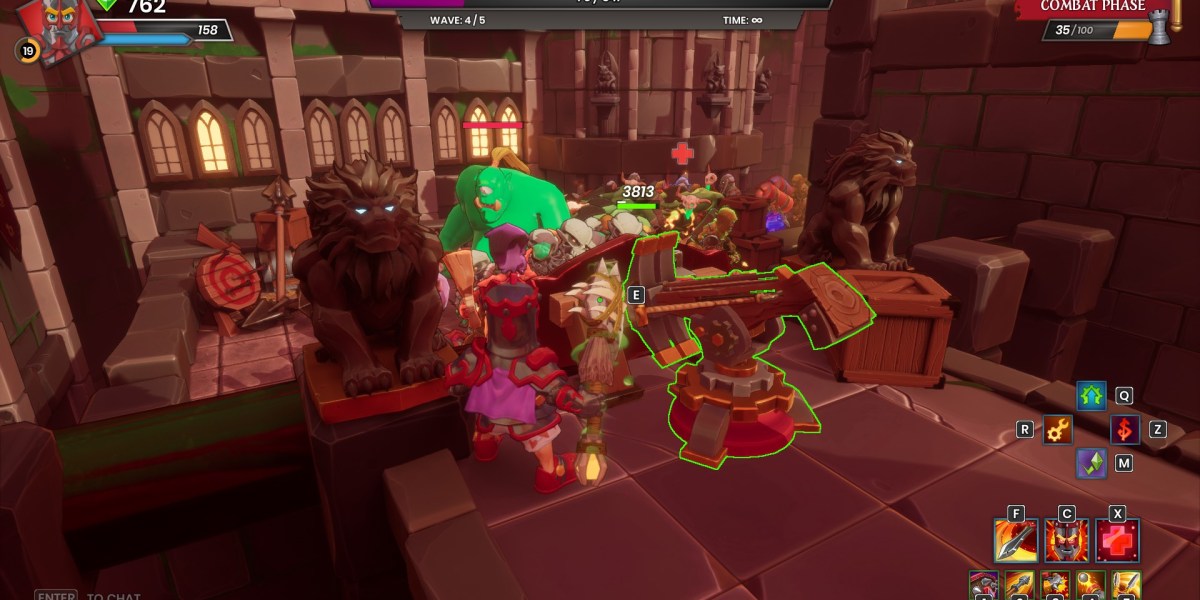 It’s risky to try rebooting a game that people still love and play. It’s even riskier when the game in question has been out for nearly a decade and has a lot of content and you end up putting a $30 price tag on that reboot. Dungeon Defenders: Awakened from Chromatic Games certainly does both of those things, but it’s hard not to be at least somewhat charmed by the game as a whole. It might not replace the title it’s remaking, but it still offers plenty of tower defense fun with friends.

Dungeon Defenders: Awakened is a combination action RPG and tower defense game. You and up to three others go into a map and are tasked with defending cores from foes that pipe in through several gates. If one of your cores gets broken, then the match is lost. However, if a character dies, they simply respawn shortly after. Naturally, the enemies that come at you throughout are too numerous and powerful for you to simply attack them with your character. That’s where the tower defense mechanics come into play.

There are four character classes in Dungeon Defenders: Awakened: a melee class, two ranged classes, and one who can do both. Each character has four separate devices they can place to defend against the enemy onslaught. These placements typically slow enemy progress, damage them as they pass within range, or both. Each map has a set amount of placements you can build, so you can’t just throw everything down willy-nilly. On top of that, building them costs gems that are dropped by fallen foes. 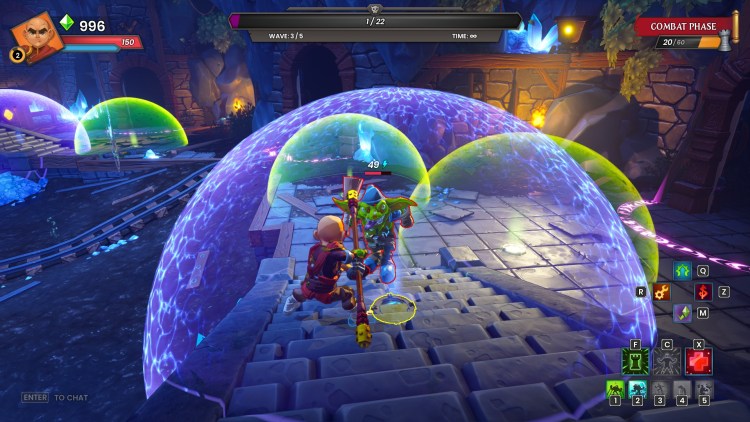 Each class also has a couple of unique moves, namely an attack and buff that operate on cooldowns. For instance, the Squire’s special attack sees him swinging his sword in a 360-degree motion, and he can briefly increase his power with his buff. Each class also has specific boosts they can supply to the rest of the team. One feature that I appreciate is that you can have four heroes in your hero deck and they all share experience. As long as you make one of each at the beginning, you don’t have to grind with them at all, which helps eliminate possible tedium.

Dungeon Defenders: Awakened features 15 maps that you’ll need to unlock by playing in the campaign. Campaign missions can be played as they were intended with others or solo. However, I often didn’t find many games when I played, so I generally played solo. The game was really easy on medium until about the midway point, where I was required to be more on the ball.

Campaign missions are predicated around five increasingly challenging waves where every last enemy must be dispatched. At the start of each match, you get a set amount of gems with which to build, and you can put down your initial placements. Afterward, you start the combat phase and the foes come rushing in. Early waves are typically short and simple, but later waves throw literal hordes of foes at you. These enemies attack your placements and can destroy them if you don’t stop them. 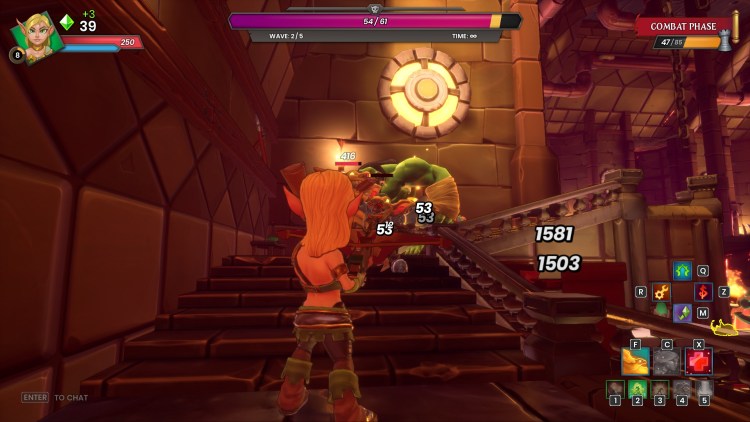 Aiding in this is the fact that you can use gems to both upgrade and repair the placements. My go-to emplacement while playing solo is the Squire’s blockade. It’s one of the few that completely stops foes in their tracks in addition to hurting them, and it also carries a cheap price tag, which is massively useful for thinning out the weaker foes while you’re trying to manage the entire map yourself. The Squire doesn’t hold up quite as well as the others due to only having a melee attack, however, as he’ll invariably take a lot of damage and require you to stand among the horde when you could be firing volleys off from a vantage point as needed with the other three.

The main point of the campaign mode is that completing it unlocks the maps in Dungeon Defenders: Awakened‘s survival mode, which is where you’ll typically find people playing online. This is exactly what it sounds like and finds you lasting as long as you can against endless waves of foes. With a good team, it’s chaotic fun to run around the map while keeping enemies at bay.

After each round, every player is rewarded with a treasure chest containing a few pieces of loot, which is often also dropped by enemies. There is a massive amount of loot in Dungeon Defenders: Awakened, and almost all of it is useless. Different weapons do have varying properties and visuals, though, so things are still worth picking up. Any loot that isn’t will be automatically sold at the end of the round, which is handy. But it’s still kind of obnoxious to cycle through pages of loot as you fit your heroes with better gear. That’s if you have anything that isn’t junk. 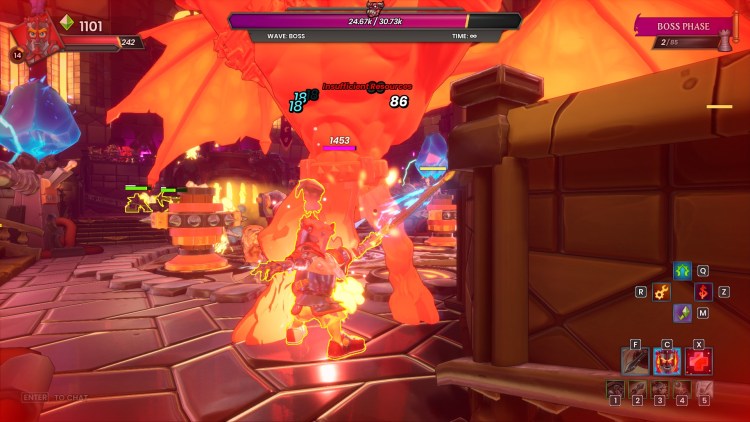 As I said, your heroes will also level up as you play, which grants you skill points that can be put into a surprisingly large amount of categories broken up by character improvements and emplacement ones. For the character improvements, you can buff your character’s health, speed, damage, and the like. With emplacement upgrades, you can similarly improve their health and damage, plus their attack range and how quickly they attack. You can reset your skill point allocation too, which you’ll probably want to do later on when your play style becomes more cemented.

Dungeon Defenders: Awakened is very visually reminiscent of the original version, albeit with a much higher level of polish. Character models and locations have better detail, and the draw distance is superior as well. The big issue as I see it is that anyone who doesn’t care a lot about visual improvements might not see much of a reason to hop into this new iteration if they’re already happy with the old one. The game does have multiple additional modes too. Challenge mode gives a unique objective to each of the maps, mix mode increases the wave count to 25 and throws a randomly-assorted bunch of baddies at you, and pure strategy mode is just like the regular mode, aside from the fact that your hero can’t do anything other than interact with emplacements during build mode.

Challenge mode is pretty enjoyable, depending on what the challenge is. The first map, for instance, makes it so that you can’t build anything at all, while another makes the cores teleport around randomly. Mix mode is especially hectic and will likely keep players on their toes. Pure strategy mode, however, is a bit iffy, as you can’t build during combat phases, meaning that it can be impossible to hurt certain ranged foes if you didn’t put the right emplacements down before the round started.

Dungeon Defenders: Awakened is an entertaining game that is very much worth playing if you’ve got some buddies to run through survival with. But it’s bit pricier than some might like and it isn’t always easy to find others to play with, so it might be wise to wait for a sale or to see if the player base increases before buying. 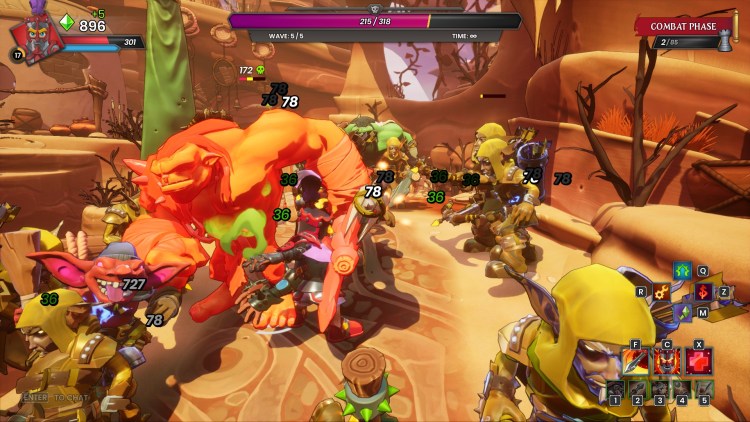 Dungeon Defenders: Awakened is a fun time, especially with others. But it doesn't have as much content as the game it's remaking yet, meaning that people still playing that one might be reluctant to move onto this version.