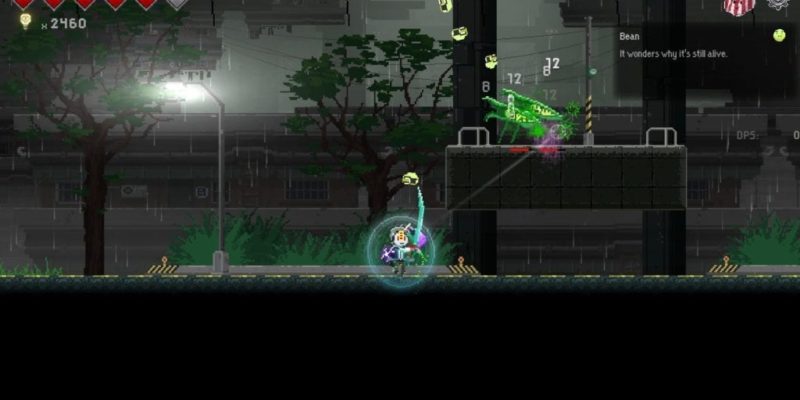 I never knew I wanted to be a zombie chef. If I were asked to list characters I’d be interested in playing, I find it unlikely that I’d pick that one. But after playing a few hours of Dungeon Munchies, I’m extremely glad I got to do so.

In case the name doesn’t give it away, Dungeon Munchies is a dungeon crawler with an emphasis on cooking. Yes, you read that right. The game enters Early Access today and comes with a single chapter, with four more on the way. This chapter is only a few hours long, but it managed to make quite an impression on me. The three-person team working on this game have done a hell of a job at making their concept work beautifully.

Dungeon Munchies has a really simple premise. The game begins with your corpse being taken out of your coffin and reanimated by a necromancer spirit by the name of Simmer. Simmer, a self-styled necro-chef, brought you back specifically to train you in her culinary arts so that you’d help her and her minions open a stargate to escape the world they live in. 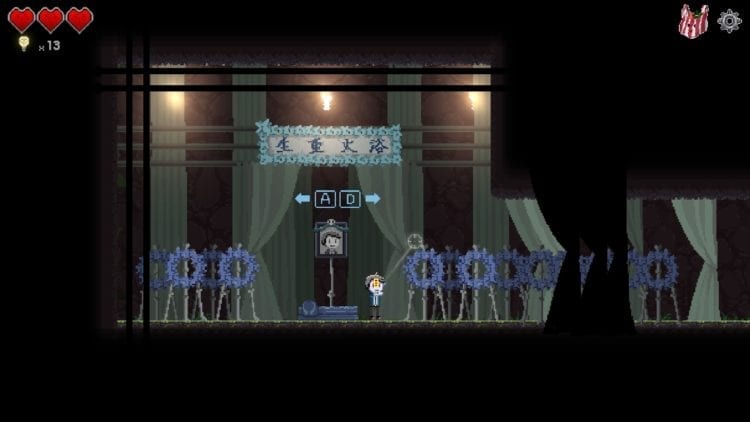 As the game goes on the story shows a surprising amount of depth. There are philosophical discussions on the nature of anarchy and dictatorships. Talk of class and the greater good. It’s heady stuff. And really well-written too. The dialogue is just plain funny and interesting in general, as I was very entertained for its duration. Dungeon Munchies even has a couple of surprising twists in this chapter as well.

Dungeon Munchies‘ gameplay is fairly simple. It’s a pretty standard 2d side-scroller where your character gains upgrades, abilities, and new weapons as the game progresses. The game can be fairly aim-intensive, however, so it’s better played with a mouse, although a controller works, even if it can’t compete with that level of accuracy. It’s worth noting that if you’re using a PlayStation 4 controller you’ll need to turn off ds4windows, or the movement will be messed up.

The movement and combat in Dungeon Munchies are just great. Everything is extremely tight and responsive. The weapons feel great to use, the character moves at a good clip, and the dodge feels fantastic. You can also hold the mouse buttons down to continually attack if you don’t feel like clicking constantly. You’ll periodically come across permanent power-ups that change the way your character moves as well. 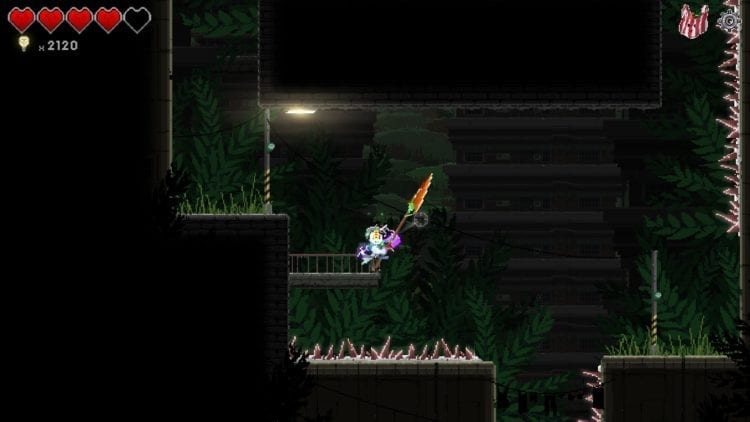 Your main weapons consist of swords, axes, spears, daggers, and bows and you’ll have a lot to choose from. Swords offer a quick three-hit combo, while spears aren’t as fast, but offer a lot of additional range. It’s insanely satisfying to pierce enemies all around you while air-dodging and aiming with the mouse. The game also has a good amount of secondary weapons that feel very different from each other. Some are more direct ranged weapons, such as an eye laser on a stick, but you can also throw vials to poison enemies, trap foes with fiery explosions, or summon a handful of bugs to aid you. Figuring out the playstyle that works for you is really a ton of fun.

So, how does cooking fit into this? Well, each and every enemy you face drops something. And by “something”, I mean their body parts. Killing a mantis can net you a claw. A hog will give you meat. A spider will give you a spider butt. Yes, that’s what it’s called. Dungeon Munchies constantly throws new enemies at you, so you’ll have a steady stream of new ingredients on hand at any time. All of these ingredients are put into your trusty plastic bag once you pick them up. This is where the game’s cooking and crafting come into play.

Ingredients are used to make both meals and weapons. Crafting weapons works just like it does in most games of this sort. You need to have specific creature items to make a new weapon. What’s cool is that the weapons you make are very clearly made out of the enemies you’ve dispatched. The aforementioned mantis claw makes a really cool mantis claw sword, for instance. The eye laser on a stick just literally comes from an enemy that already shoots lasers out of its eyes. It’s all very logical for a game about undead cooking. 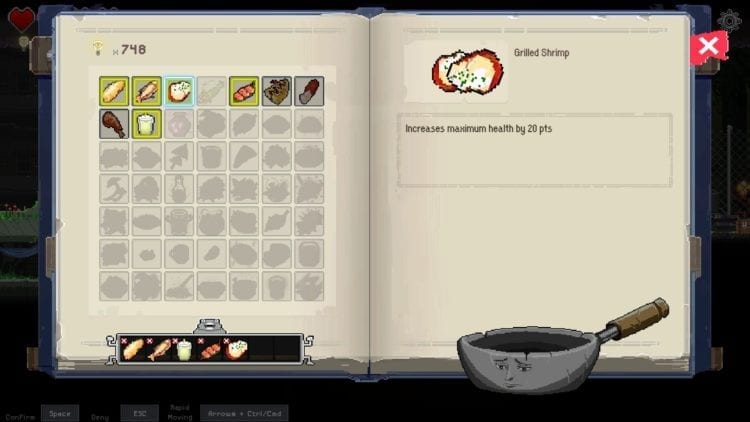 Then there’s the cooking. Ingredients can make meals with a variety of effects. The first one Dungeon Munchies throws at you is a meal made from some insects you fight at the beginning. Eating this meal literally gives you insect wings that allow you to double jump. Despite the game only having a few hours of content right now, there’s a huge amount of recipes and weapons to make. Each food item gives you a bonus, of which there are many. You can only use as many of these that fit in your stomach, however. If there’s another bonus you want, you’ll need to remove something so it fits. Luckily, you’re dead, so the food never digests and you don’t need to cook things more than once.

Dungeon Munchies has an excellent art style. Sprites are colorful and packed with personality. Many are also quite memorable. I’m still a little disturbed by the talking banana that suggested that I kill him and eat him while he smiled at me. During dialogue, characters get portraits that are all detailed and cute. Simmer, in particular, is a scene-stealer, as she has a habit of doing strange things with her face.

The level design is mostly linear, so don’t expect a Metroidvania. Dungeon Munchies does give you the ability to warp from specific places, and you also unlock recycle bins that function as respawn points. These are placed a little too sporadically, honestly. At a couple of points, I felt that I went too long without seeing one, while later on, I felt like I was seeing them way too close to each other. 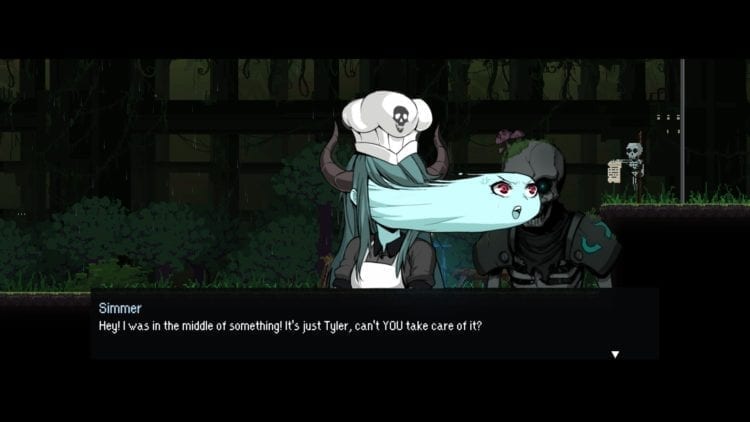 That generally isn’t necessary simply because Dungeon Munchies isn’t usually all that difficult during this first chapter. For the most part, I didn’t have any trouble. However, the second boss battle has an absolutely massive difficulty spike that comes out of nowhere and then totally backs off. It seriously felt like the game went from a four to a nine and then down to a six right after. It didn’t help that you can only take five hits from this boss and that, once it dies, it spends a long time shooting a huge amount of bullets that you have to dodge in order to win.

Aside from those minor issues, though, Dungeon Munchies is a wonderful game so far. The combat is excellent, the writing is funny and intriguing, and the visuals have a lot of character. This is certainly a game to watch, as I’m expecting some great things from it. This is one Early Access game that I’m glad I’ll get to experience from the get-go.