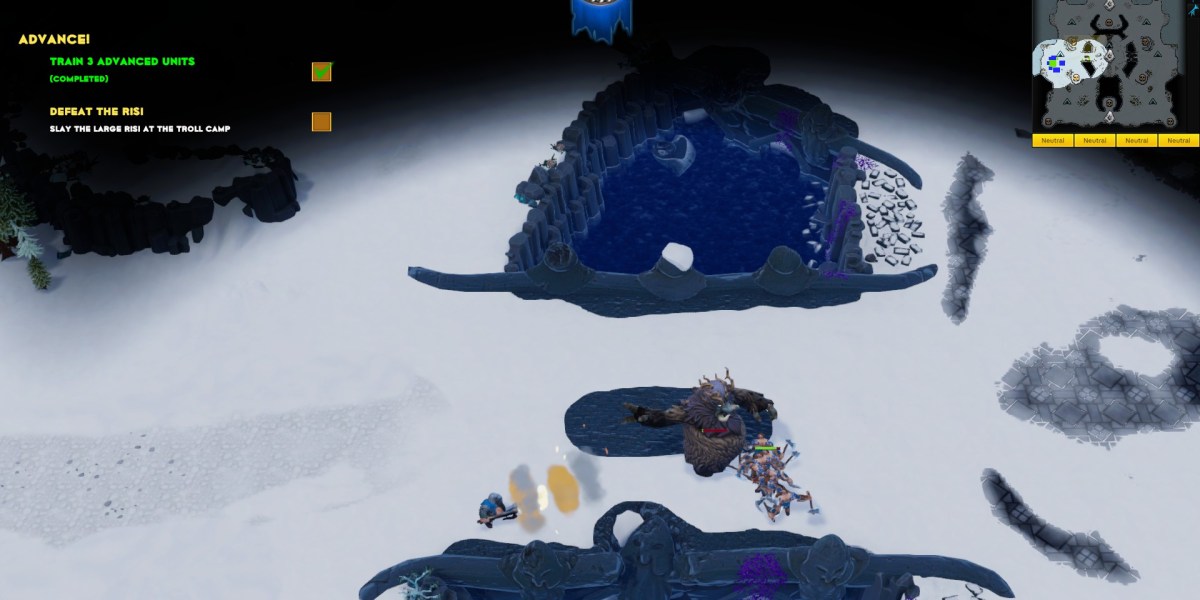 Stop me if you have heard this one before: an old-school RTS with resource gathering, base building, and unit training? But we’re not talking about the definitive edition of Age of Empires III. There’s one thing that sets DwarfHeim apart: you need three people to control your faction.

The game takes place in the world of Agartha… and that’s all of the details for now. By the looks of the Steam Store page, no story-driven campaign is in the works. Your stated goal is to reclaim the ancient dwarven homeland of DwarfHeim, except for the fact that you’re fighting dwarves just like you. There may be an errant troll here or there as well.

So, the biggest new thing in DwarfHeim is that the roles usually filled by one player are split between three people. The Builder class starts by building a farm right next to the Town Hall (as our ancestors teach us), chops wood, and constructs most structures as well as major defenses. The Fighter doesn’t really build or gather resources, but he can train actual combat troops to fight other players as well as farm mobs in the field. 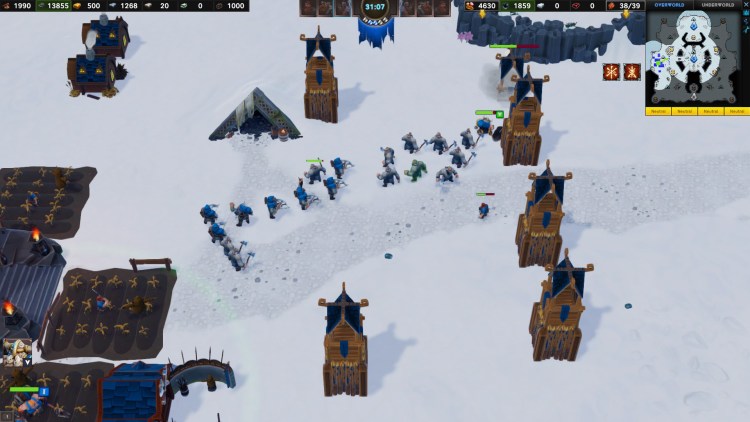 Unlike in most other games, the dwarf mercenary is the most trash soldier in the Fighter’s arsenal

The Miner goes down into the underworld map to basically play Factorio. You see, there wouldn’t be enough meat on the traditional RPG bones to keep three people busy, so the devs had to get clever. The Miner doesn’t just task, well, miners to dig a bunch of rocks. Oh no, he builds conveyor belts interspersed with crushers, splitters, sorters, forges, and transmuters.

This isn’t just about depositing ores in the $collection_point as it is with the Builder. No, ores need to be crushed before going to the warehouse where they are forged into ingots to bring more income. They are also combined in the transmuter to make steel and other alloys. 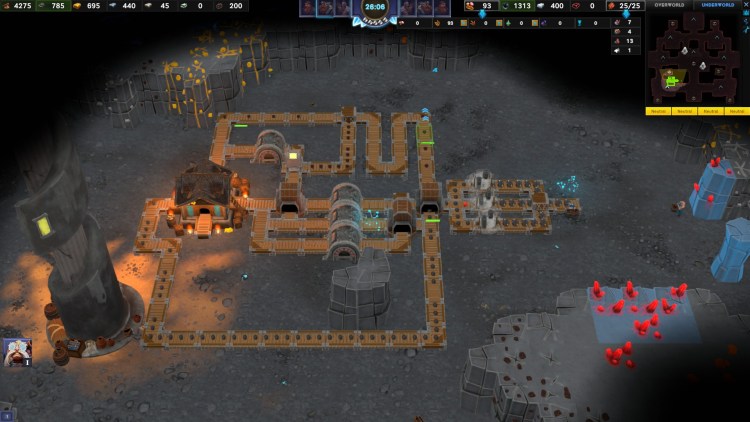 Dwarves no-clip right through the conveyor belts. It’s both convenient and keeps OSHA off your back.

There are hints of similar systems with the Builder though. For instance, he can harvest two varieties of grain (and use dedicated farmers who farm faster than the default builders), but he too can go underground to grow mushrooms. Those are then combined into brews, which provide buffs to friendly dwarves. He also handles healing.

Specialization is for insects

See, all three classes in Dwarfheim have some overlap and some responsibilities that put them a bit outside of their usual sphere. The Miner trains explosive experts, who are the best siege units. The Builder can hire guards who act as the last line of defense and place light sources in the underworld. The Fighter… well, he fights mobs and gets resources from that.

Actually, the Fighter is probably the most straightforward role – and kinda boring! The combat in DwarfHeim is no more sophisticated than it is in Age of Empires – there’s not even a pretense of formations. The Fighter can busy himself while he waits for the others to collect resources though by launching quick raids on the enemy infrastructure. Whether it be raiding woodcutters (the farmers will never leave the protective walls of the base) or going downstairs to wreck miner infrastructure, there’s usually some trouble to make. 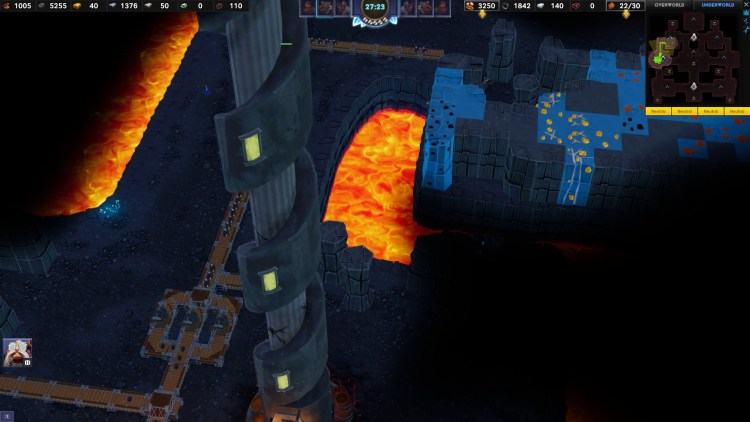 Said stairs are photobombing my screenshot

Another thing that DwarfHeim does to keep the Fighter busy is task him with the collection of altars on the map. These alters provide faction-wide boosts. However, you can also do that by just clustering your dudes on the altar, which, again, doesn’t require much in the way of finesse and planning. The game lists Company of Heroes as inspiration, but I feel like it’s only the idea of capturable points that hints at this influence. Squads aren’t a thing. The dwarves don’t take cover or really act on their volition, so there’s no morale or flanking. Combat situations are generally left to hoping that more enemies die than your own troops. There’s really not any depth to speak of.

Yes, we can also question how much depth there is in the industrial chains that Farmers and Miners have to deal with. Let’s not forget though, this is meant to be a fairly short game. My solo matches against the AI rarely lasted over 40 minutes. It would have been even shorter if one of the two friendly AI roles weren’t bugging out. A bit of shallowness is to be forgiven, seeing how you’re not supposed to sink hundreds of hours in perfecting your systems a la Factorio (also an influence).

Yet while this is a thing that is unlikely to be changed in the development, there’s one thing that serves as argument against buying DwarfHeim today, and that’s the visuals. The game does not look great in its current iteration. Nothing looks good, least of all the snow map. Now, we’ve all seen the promo visuals and can say that it will look better later on. For that, we just have to wait. 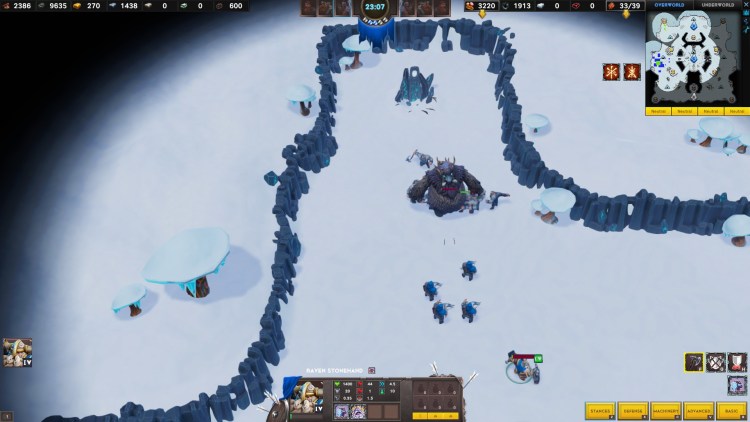 I sense quite a few “ouchies” and maybe even a “booboo” in the near future.

But I don’t think even time can do anything about the questionable quality of writing when it comes to unit barks. No, I don’t think it’s apropos for a dwarf in battle to yelp “ouchie” when hit.

One other reason to wait for a full release is the lack of a player base. You are not going to find that many online opponents now – though that might be a result of writing before the game enters Early Access. Without online opponents, you’re left with either trying to rope in friends or fighting the AI. And we’ve already established that the AI is dumber than the dumbest of your friends.

All in all, is it worth getting DwarfHeim now? No. While this isn’t a single-player story-focused game that you can ruin for yourself by playing on Early Access, there is currently not enough meat on them there bones to justify a purchase. My advice is to wait for a more polished build – or maybe even the actual release.

I just hope that other RTS devs will crib the idea of cooperative faction control for future titles. It seems like a lot fun and it would allow for much deeper detail in each of the player spheres that would otherwise feel overwhelming for a single player controlling it all at once.