You’ll be able to enter Carnage Hall in Dying Light 2: Bloody Ties after completing a set of trials in Villedor. From there, you’ll have to talk to Severus, the tournament organizer, who’ll present the activities.

There are four major types of challenges in Carnage Hall (which we’ll detail in a short while). Here’s the gist when it comes to the tasks: Freak Fight activities pit you against special infected with unique moves. These tend to be the easiest and most straightforward tasks. Here are some examples: Carnage, meanwhile, has you fighting multiple undead. However, only a select few are marked as important targets (i.e., usually special infected). Take out your initial targets, which will subsequently spawn the next wave.

Note: Bolters (i.e., fast-moving zombies that like to run and climb everywhere) will periodically spawn. You’re told that killing them will yield powerful weapons. Unfortunately, that’s not always the case. It’s possible for the mobs to not have anything on them, and their corpses will just disappear. 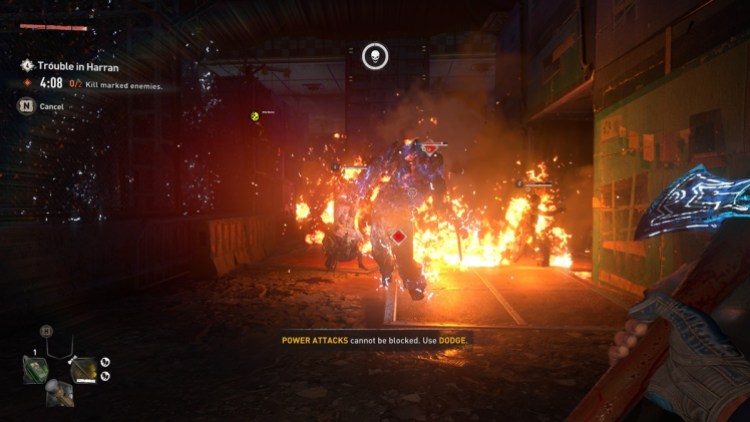 Rush focuses heavily on your parkouring skills, where you’ll sprint, climb, swing, zipline, and wall-run to reach platforms. You’ll need to pass through all the checkpoints (i.e., blue rings) before the time limit expires. Likewise, you’ll see white rings, which denote the next checkpoints that will spawn, so you can plan ahead on where you’ll need to go next.

Rush tends to be somewhat difficult. You’ll have to avoid making mistakes, or you’ll waste a lot of time trying to get back on platforms. Similarly, mobs will spawn throughout the activity. Projectile hits and explosions can cause a lot of hassles. In any case, you can take a look at our parkour skills guide to decide on the best perks to acquire. Spectacle activities are the grandest Carnage Hall challenges in Dying Light 2: Bloody Ties. This is a multi-step foray where you have to complete set tasks. Here are some examples: