Having now played Dying Light, I have my suspicions as to the initial design. I’m starting to believe that Techland is made up of parents with young children, and they really, really want to create a game all about why you have to get home before dark.

Seriously. If you have children of your own, or remember being a kid, I suspect that “Yes, that’s fine, go out and have fun, but make sure you’re back before dark” is ingrained into your psyche. That, right there, is Dying Light in a nutshell.

Okay, sure, there’s a lot of guff about how you’re Kyle Crane, dropped into the zombie-infested city of Harran on a mission to find a rogue operative etc. etc. But that’s not what the game is really about. It’s about not being outside after dark. 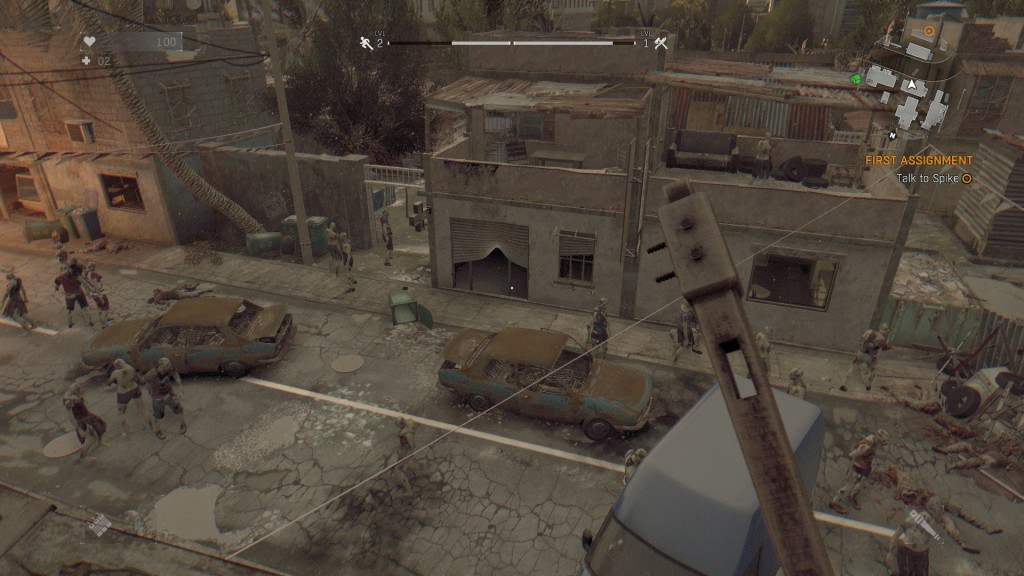 Lots of zombies. Lots and lots.

During the day, things aren’t so bad. Yeah, sure, the city’s in ruins and there are zombies and angry human survivors everywhere, but you can deal with that! Zombies are slow and incapable of climbing, and they fall pretty quickly to a few slaps from an iron pipe or a wrench. Besides which, you have amazing parkour abilities: you can scale walls and leap between rooftops to easily avoid the mindless (and skinless) hordes thronging the streets.

So yes, daytime is when you wander around exploring, completing missions, scavenging for supplies, clubbing zombies in the teeth, opening up new safehouses, etc. It’s very… well, it’s very Dead Island plus parkour. Perhaps a bit less ARPG and a bit more open-world, though; bits and pieces like clearing safehouses and getting to airdrops are reminiscent of Far Cry or Assassin’s Creed, and enemies don’t appear to have discrete “levels” – or at least, don’t display it.

But you still scavenge ruined buildings, cash registers, fridges, cupboards, and crates to find components. You can still combine batteries and a bit of metal to create an electric club, or some explosive throwing stars, or whatever. Combat – in the early stages, at least – is primarily melee, using makeshift weapons. Zombies tend to be slow and relatively ineffective on their own. I don’t have a huge amount of Dead Island experience, so maybe not all of what I’ve said applies to that game, but that’s the general sense I got. 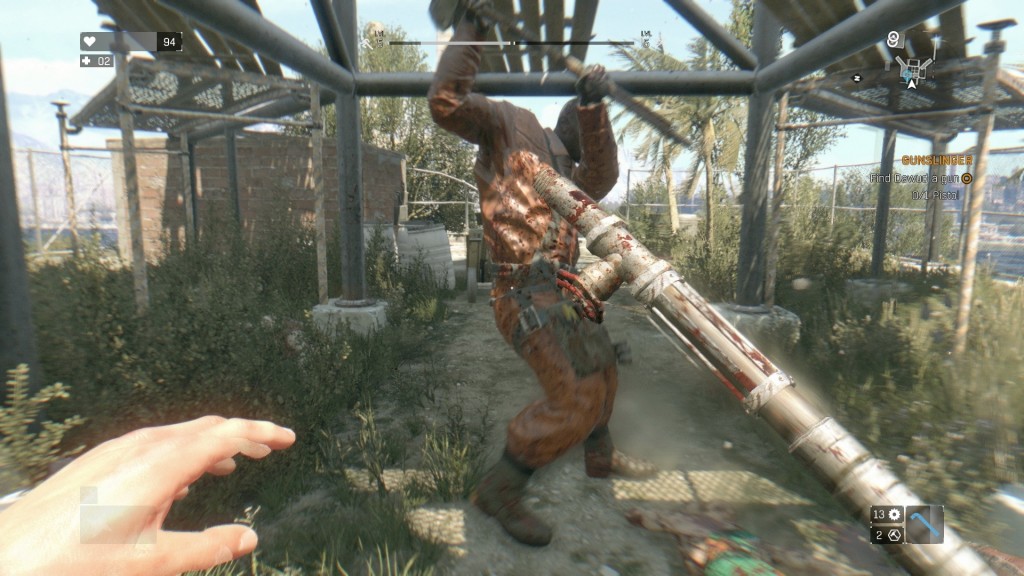 Okay, so not all of the zombies are ineffective. Some are really big and dangerous – although they’re still pretty slow.

You do have a Mighty Boot button, though, which I like. There are all sorts of environmental hazards around the city, like spiked rails, which errant zombies can be kicked into – or, if one’s somehow made it up to a rooftop, you can give them a very quick trip back to the ground.

The parkour also makes quite a big difference to the flow of the game. Early on you’re a bit slow and you can’t run very far, but you can still climb almost everything that seems climbable – and that really works, both to give you general freedom of movement around the doomed city of Harran, and to give you a way of negotiating hordes of enemies. But when you start levelling up you start getting access to better perks – the ability to slide under low-hanging objects, or use enemies as a stepping stone in a jump, or just the ability to run for longer and climb faster.

I’m also incredibly pleased that you don’t have to be parallel to something to climb it, too; if you leap towards a corner then you will climb from the corner, complete with unique animations. 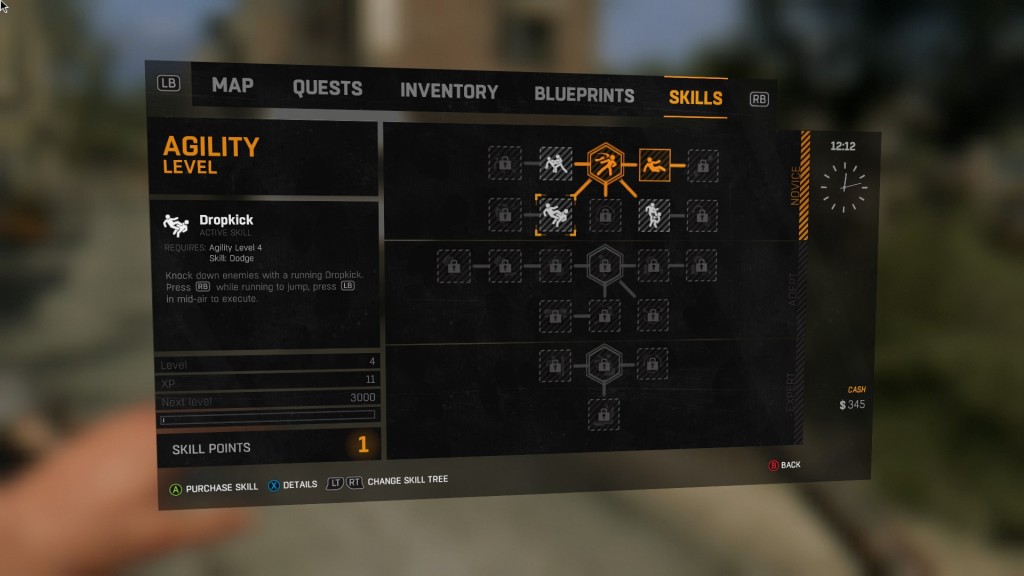 Oh sure, dropkicking zombies sounds fun, but so does breaking their legs while sliding into them! Or using them as parkour stepping stones! Or…

Upgrades themselves are split across three skill trees. One is devoted to general survival (crafting, etc.), one to your parkour-ing agility, and one to raw combat, and each tree gains experience and levels up independent of the others. Every time you climb a building, for instance, you’ll get some experience towards your next agility level. Club a scavenger in the face or kick a zombie into a spike trap, and that gives you experience towards your combat tree. Etc. You’re rewarded for doing whatever you like doing, but you’re not going to become a combat monster by fleeing across rooftops.

The daytime experience is… comfortable. It’s open-world roaming with plenty to do, plus the occasional random event quest. Yeah, you might accidentally alert a big group of zombies or something, or get into a fight with a large band of looters, but you’re generally pretty okay. No more threat than your average game, really.

Then night falls, and you are fucked. 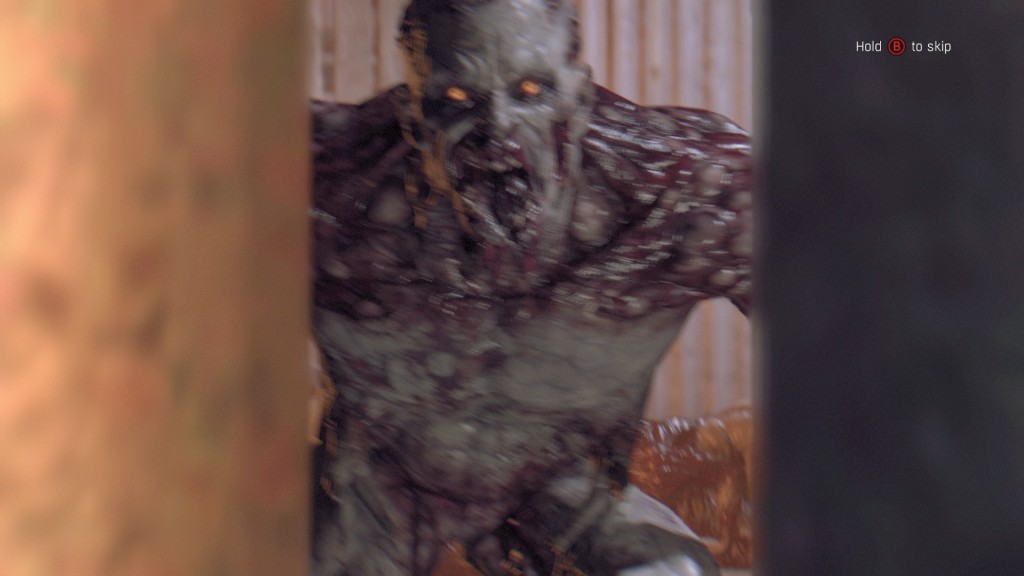 OH GOD GET AWAY FROM ME

Night, here, is almost literally a game-changer. When darkness falls, Dying Light transitions from an open-world zombie-smasher into stealthy survival-horror, in which you can die very, very rapidly. Other than the fact that your sudden lack of vision makes Mr. Magoo look like an eagle with binoculars, night time is when a particularly nasty breed of zombie wakes up.

These zombies can climb. They can jump. They are as fast as you, and they will hunt you. Best case scenario is that they don’t see you and you manage to sneak to the nearest safehouse, where UV lights keep them at bay. Worst case? They see you, and you’re suddenly on a sprint through the city and across the rooftops, desperately hoping you don’t miss a jump or find yourself in a dead end.

You’re not totally defenseless against them – a UV flashlight can hold them off for a moment, traps placed around the city can be activated to give you a brief respite, and I’m fairly certain there are ways to actually put them down permanently – but if you’re not paying attention or not planning your route, they will catch up, and they will kill you. 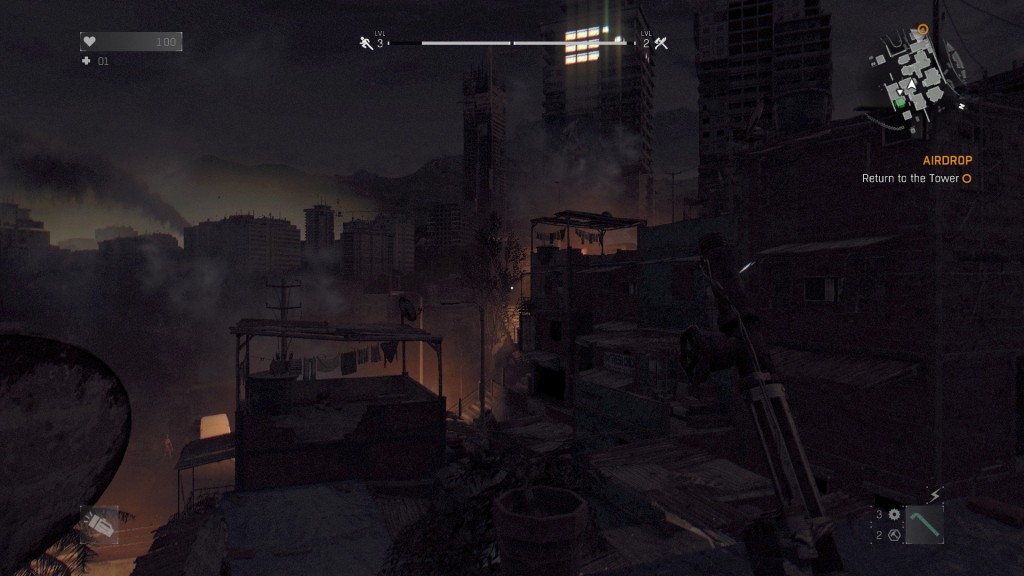 This is where the bad things happen.

You get radio messages warning you when night is about to fall (if the descending sun didn’t clue you in), and you can skip to the next day by resting in a safehouse, but that’s boring. There’s something gleefully daring about staying out just a bit late, so that you have to spend a little time in the dark.

But even if you wanted to, you can’t avoid the night forever. Maybe you have a mission to do at night, or maybe you’re too far away from any safehouses and simply can’t make it to one before darkness falls. One way or another, you’re going to have to face off against these horrors before long. 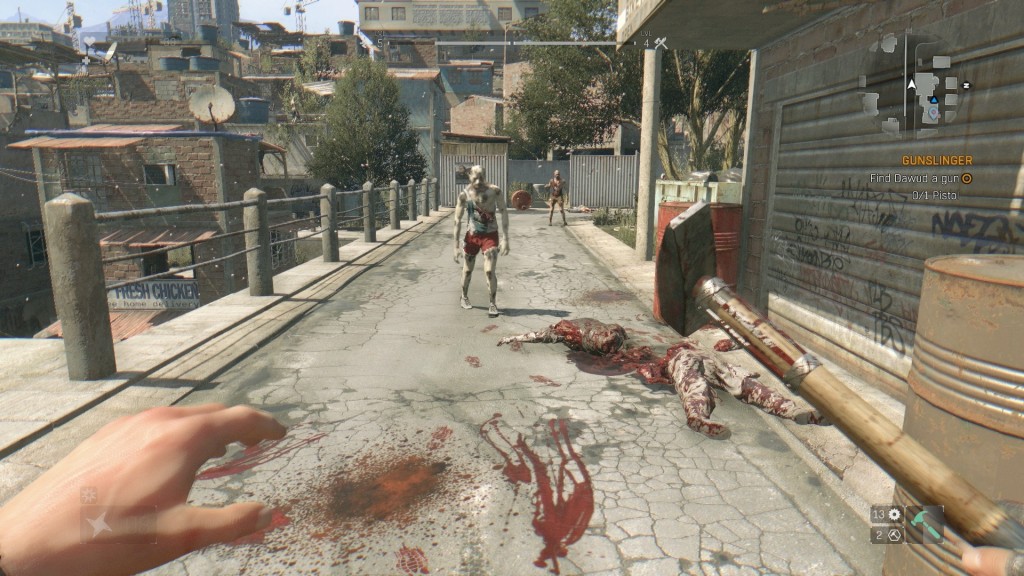 Aaaaand back to the considerably lower stress of just bashing shuffling zombies on a street.

Now, I haven’t had too much experience with night because 1) the preview code rarely made me venture into it, and 2) every time I tried going out at night I died horribly within about a minute, but it reinforces my thinking that the day is very much all about getting used to the environment and preparing for the night. Learn the layouts. Learn where the traps are. Learn what you can quickly climb and what will take longer. And then, maybe, you’ll live.

Or perhaps I’m just really terrible at Dying Light. I’m not ruling that one out. 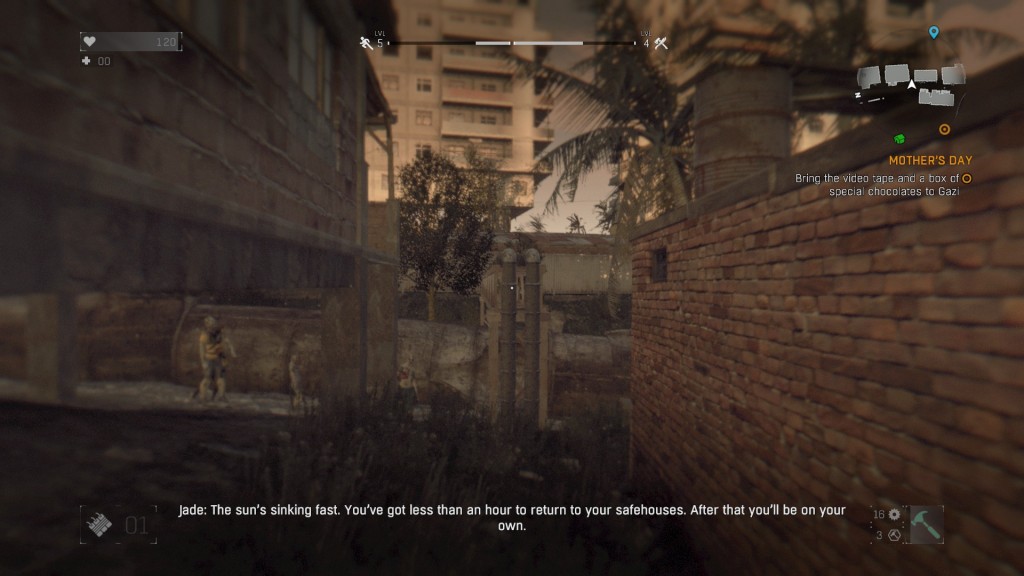 The changing ambience gives you a pretty good clue as to how long you have left, in case you’re not paying attention to the time. Morning is slightly muted, the middle of the day is beautiful and bright, and everything goes a bit orange when the sun sets.

I suppose I should also spend a few words on the PC controls and performance, although I can’t say too much about either. This isn’t because Techland have asked me not to, though! This is because the PC controls are still being fiddled with, so me complaining about having X action assigned to Y button would be a bit silly. Instead, I played with a gamepad, which was entirely serviceable. It’s a bit odd having the jump/parkour button mapped to the right bumper rather than A, but this is probably because “look behind you while running in terror from something” is mapped to Y, and it’s a damn sight easier to press Y and RB than it is to press two face buttons. There look to be a few control schemes available though, so I’m sure that can be changed if need be.

Performance, on the other hand, has basically been perfect throughout. I’m running Dying Light on pretty much the highest settings I can find and while there are a few stutters when it’s presumably loading a new area, it’s generally silky smooth – not bad for something that’s still a couple of months out. It’s worth noting that I couldn’t find a way to adjust the FOV (perhaps because it’s very big on showing your arms and hands when you do basically anything, and increasing the FOV would screw that up tremendously) but the default FOV didn’t upset me overmuch. 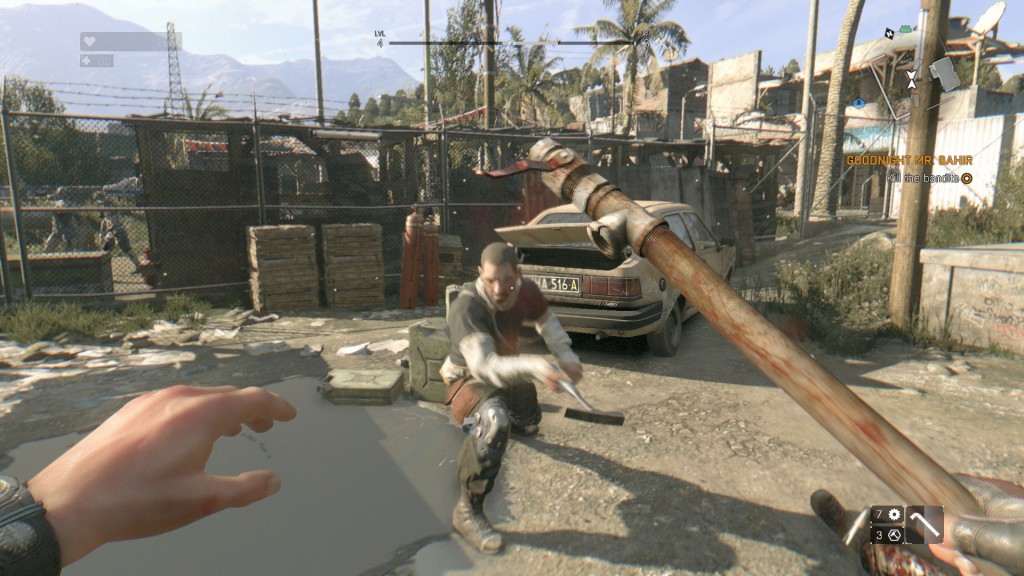 Bandits, on the other hand, can actually block your melee strikes. Dodging and timing matter a lot more, there.

So, I’m… cautiously optimistic. I obviously haven’t played enough to form hard judgments but the more I played Dying Light, the more I actually wanted to play. I’m not hopelessly in love with it or utterly desperate to play more, but I’m having a rather good time, and that’s a pretty good way to start off anything.

One last thing: we’ll have a video up before long. I’d intended for it to go up alongside this preview but the recording crapped out on me and half of the video went missing. Keep your eyes peeled, and we’ll hopefully have some actual gameplay footage up within the next few days. It might help you decide if the lack of an FOV slider is a deal-breaker for you, if nothing else.

Just remember to be home before dark.

By Steven Wong13 hours ago
Previews