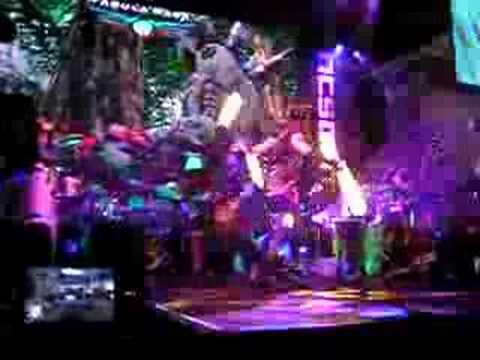 In years past, I remember distinctly, my first time stepping over the threshold and into the blinding lights, blaring music and countless dozens of bikini-clad women handing out the swag-wares of over-sized trade show booths. People moving about like a hive swarm that had to be braved if I wanted to see that one title from that one developer for fear of never seeing it again (at least until launch day).

I remember spending countless hours sketching out an E3 attack plan, because if I didn’t, there’s no way I could cover all of the event in a meager three days. Every morning after only a few hours of sleep, I would strategically stuff pain meds in various places upon my person and in my pack to combat the foot, lower back, leg and headache pain that I was destined to be suffering from by the end of the day. Wrestling other journos for space to plug in my dying laptop in order to type out article at light speed in an effort to be the “first” on the internet. Drinking gallons of coffee and caffeine soda to give me enough energy to push my way to the next booth and talk with rock-star devs about their beautiful games.

This is the E3 I remember, the E3 I “grew up” in, the E3 I lost my journalistic virginity to when I was just starting out in this industry. But, this is not the E3 of this year which was more akin to drinking tea and having delightful chat with the ladies in the garden.

Allow me to go further in depth…

The show floor seemed rather empty this year versus years past. Likely due to the fact that a great many developers are opting for closed-door affairs. One thing to note was the over-whelming amount of what appeared to me, average-Joe gamers (aka the public) compared the amount of actual industry professionals. One of the gauges I use as a tool of comparison is the media hospitality suite, normally over-run by video game journo’s writing about the latest and greatest games, has now become a ghost town of sorts.

Perhaps it’s the fact that many members of the press are either on the show floor, or writing their pieces from the comfort of their hotel rooms. Or, more likely, that E3 isn’t the golden child of video game shows and hot bed of activity it once was.

The major players when it comes to showcasing their products were in attendance as usual. The largest booth by far was Sony with row upon row of PS4’s ripe and ready for play-testing by many an industry professional. Right next door and almost wrapped in Sony’s cocoon-like embrace, was Microsoft, also showcasing their newest product, the Xbox One.

I can’t explain the lack of presence by other major tradeshow players, except that I believe that most studios opted for the less expensive meeting rooms instead of the larger, over-the-top, show floor extravaganza that E3’s of years past had. Perhaps price and budget are the cause, which of course is understandable considering that everything in Los Angeles is expensive. I know this, I live here.

I noticed a great deal more closed-door booths where one had to register with a developer’s PR professionals in order to be scheduled for a one-on-one demo. This is different from past events and makes me wonder if the ESA has stopped cracking down on the “industry professional” requirement thereby causing the developers to have to police this themselves in order to get their titles directly to the media professional.

I also noticed a considerable amount of booth sharing. One studio of note was NCSoft, the fine developers of great titles like Lineage, Guild Wars, City of Heroes and the newest addition, WildStar. In years past, they were arguably one of the largest exhibitors at E3, but this year, they pulled a no-show, at least within the confines of Los Angeles Convention Center. Rumor has it that Carbine Studios, NCSoft’s WildStar dev house, had an off-site meeting room where they were showingcasing a playable version of WildStar. I never went there, but a colleague did and said that it was what was to be expected if Carbine had a booth on-site in one of the meeting rooms.

I had said before that Xbox and Playstation had the largest booths on the convention floor. It’s understandable that these two exhibitors would be the largest considering they’re both releasing their newest products this year. Due to this minor fact, I believe that PC games didn’t get as much of a push this year as did other games that were said to be playable on the PS4 and Xbox One.

That is, apart from one. UbiSoft. While they were showing off their console titles, they did take an opportunity to demo Watch_Dogs, an open-world action adventure game that pulls players together on multiple platforms. The graphics were more than beautiful and at certain points difficult to distinguish from what we would see in the real world.

PC games just didn’t seem to get the love that they deserve at an event that should include all platforms. I missed this and I suppose it’s safe to assume that all the big titles will be hitting PC’s as well, but with such a large emphasis on consoles at one of the largest tradeshows in North America, it makes me wonder if game devs are seeing a drop off in the PC market and actively pushing their titles to consoles. I don’t think PC gaming is dead, but I do think that some people believe that; people in high places, decision-makers and this kind of scares me. I just hope that this year’s E3 is a fluke and that next year will push us back to where it used to be.

Overall, I still had a great deal of fun on the show floor but the expo has gotten considerably smaller in comparison to the “old days” with studios opting to put advertising wraps on buses (I’m pointing at you Dark Souls II), and paying for the smaller meeting rooms, instead of overly-large show floor booths.

Whether this is due to budgeting costs of development studios or the fact that there are other trade events across the country for people to attend, I don’t know for certain. However, it was still fun to be able to be in an environment that caters to the overwhelmingly large population of video game professionals.

Truly, my hope is that this years E3 emphasis on consoles is merely because the two largest competitors are releasing their play systems at the end of the year and nothing more, because to rob the industry pro’s of the one time they get to see these games in action (aside from GamesCom) in order to open the doors to the public is a crime to humanity! Okay, perhaps that was a bit dramatic, but please, if you’ve never seen The Mutaytor on-stage and shredding your ear drums in the NCSoft booth, then you’ve not lived life.

For more E3 2013 impressions, have a listen to Deirdre’s guest appearance on the IncGamers E3 Podcast Special and view more of her work on Torwars.com. More shots from the show floor can be found right here.