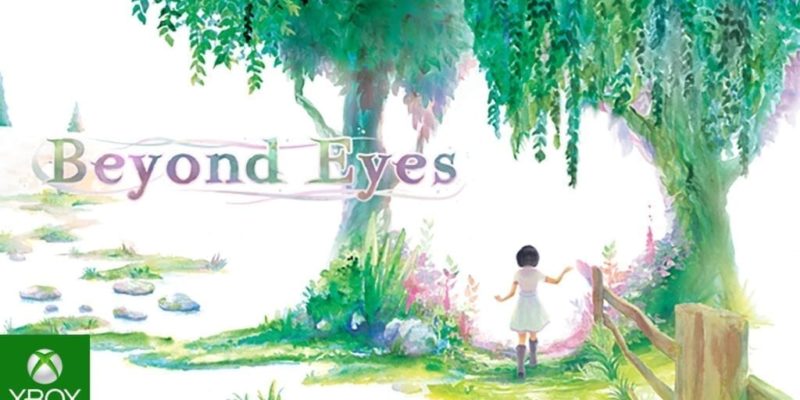 For many gamers, Microsoft’s press briefing on Monday was their first introduction to a new and fascinating title from indie developer Tiger & Squid called Beyond Eyes. The game, in which a blind ten year old girl named Rae ventures out on her own for the first time, is a hard game to understand until you play it. Fortunately, I had the opportunity to wander through one of the game’s chapters during E3.

And Beyond Eyes is unlike anything I’ve ever played before. It’s a unique experience full of exploration and revelation. As Rae, you begin the chapter by facing an empty void around you. As you explore with your senses, you begin to fill in an empty world with colour and shape, like an artist filling in an oil painting with brushstrokes. While the game is largely visual, its designed so that the visual elements represents Rae’s other senses. A barking dog in the distance causes pulses of color to radiate out from the animal, revealing (perhaps from echoes) the bars of the fence keeping it contained. When it falls silent, the colour and shape of the dog and fence disappears. A murder of crows cawing in a tree reveal both them and the branches in which they rest. Touching a fence or bush brings it into immediate focus.

But ultimately, the things that fill in the world are those things Rae imagines them to be based on her senses of hearing and smell. However, Rae is not always right in her interpretation of those senses of hearing, leading to some startling moments. Her sense of touch brings clarity to most things in the world, and what she has perceived something to be at a distance may suddenly change in closer proximity. The trickling sound of water nearby makes her believe that there is a fountain in the middle of a field. Upon touching it, however, it turns out to be a sewer drain emptying from the side of a hill. The flapping sound of a laundry line turns out instead to be a wind-blown scarecrow, causing Rae to hold herself tightly in fear.

Some sounds are unfamiliar or indistinct and are therefore shown as shrouded in darkness, such as the sound of a road that Rae must be careful to cross. Audio is, understandably, very important to the experience, and Beyond Eyes does an excellent job of making the player hear everything that Rae hears in crystal clarity.

The part of the game I saw was very slow paced, with Rae moving slowly about to explore her world. There are no enemies or monsters here. Indeed, there is little in the way of traditional gameplay. One can move about, and there is a single button to interact with objects. For that reason, it’s hard to call Beyond Eyes a game in the classical sense. It’s more of an experience, and one that’s worth having.

Discussing the game with Director Sherida Halatoe, she noted that the game is not so much about trying to replicate the experiences of the blind, but rather more generally about facing one’s fears and overcoming personal obstacles. Ultimately, it’s a game about stepping outside of one’s comfort zone and exploring new possibilities. Nonetheless, the game examines the senses in a new and enlightening way. Whether it remains as captivating over long stretches will have to be seen, and I look forward to seeing gameplay variation in other chapters. However, for the short time I played Beyond Eyes, it kept my interest and I feel the richer for it.

You check out the trailer for Beyond Eyes below: