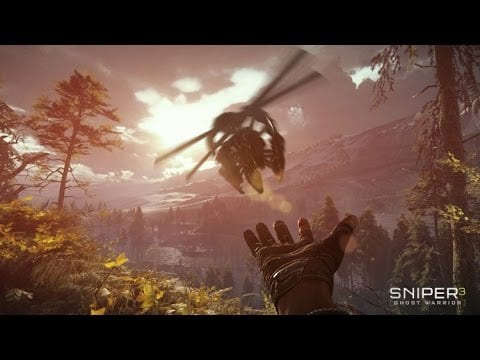 Disclaimer: The demo played and seen were Alpha builds of the game.

The Sniper: Ghost Warrior franchise has made progress over the years. The first installment in the series wasn’t met with much acclaim. The game debuted on the Chrome Engine, showed lots of ambition, but wasn’t enough to save it from itself. However, when Sniper: Ghost Warrior 2 rose from the ashes, it brought with it the game running on the CryEngine and showing some vastly improved mechanics and design. Now, the franchise is taking yet another progressive step in its development path.

The biggest change for the series is that Sniper: Ghost Warrior 3 will involve a vast, open-world landscape. Yes, the game is based on the open-world aspect where you must craft, detect, and kill all in the name of your survival. There isn’t any linear progression, in fact. The main story and side-missions can be initiated whenever you choose to embark on your survivalist journey.

The game is set amongst a new Cold War in Georgia, Russia. The lush environment seen in the demo showcased blistering rain,  gusty winds, and promises more arctic temperatures in the future. The game introduces a dynamic weather system to support the geographic region. Shooting conditions will be a test of your skill, but also may come as an advantage for the kill. A day-night cycle will not only make stealth an option, but randomized black markets will appear only in the night.

“What we are giving you are the tools and challenges, and you figure out how to overcome them.”–Jess Lebow, Lead Narrative Designer

Instead of a leveling system, the game will teach you how to snipe. No, you aren’t going to become a real-life shooter, so calm down Mark Wahlberg. But, you might learn a thing or two about how snipers work. For instance, above your scope you will notice a detector for range, temperature, wind pitch, and humidity. This is aside from the limitations of other sniper games, only identifying the scope magnification as a key factor. A missed shot based in mis-calculations could create dire situations where guards are alerted. All of these indicators affect ballistics, that is, if you’ve actually done the right work to identify your target.

Not shown here are the indicators for wind, temperature, humidity, or range. All were shown above the scope in the demo.

The game puts a lot of emphasis on learning and analyzing. When dropped into a given location, you must identify key components of the land in order to determine the optimal route. You can scan for enemy minefields or discover new perch for shooting. Locating the Safe House will open up a weapons cache, additional ammo, and the details of the next act.

The safe house is where you be debriefed, but not necessarily be given a ton of details in regards to your mission. The rest of the intelligence will come from infiltration and ex-filtration of a given area. The areas that we know about thus far are the: Airport, City, Countryside and Dam. With the square mileage being so expansive, there is a fast travel feature between safe houses. And, considering the map that we saw in the demo, you’re going to want to if time is of the essence.

Mechanics like the Sniper Sense can be enacted to identify tracks, and even things like whether or not an opposing sniper is entrenched in a hillside. Better yet, you can find out whether or not that sniper has a scout with them. The good ones usually do.

If you think that it would be hard to find out every little detail just by scouting on foot, the game features a deployable drone. The device flies similar to a helicopter and is able to get into places almost undetected. The drone itself can take damage, utilize upgrades, and new ones can be purchase in the case it is shot down. Item crafting is also a large part of the game. Weapons that are picked up can be broken down and used for crafting new ones. An AK12 isn’t a likely weapon for stealth. So, that gun can now be broken down to create other necessities, including things like bullets themselves.

The drone can be launched and then commandeered. Controls were what you would expect from a helicopter/hover vehicle.

Enemies can be taken down in various ways. They can be shot from a distance, knifed in close quarters, or even shot with a silenced pistol at medium range. Your detection meter is a grayed-out portion of the screen that points in the direction of your onlooker. But, once the alarm is sounded, the waves of guards that respond are unrelenting. That is one reason there are so many places to find hiding locations, including climbing just about everything in your path.  Using your Sniper Sense can reveal climbable ledges to scale. Repelling is also part of your tool set as you can quickly make your way down some steep areas.

Instead of a leveling system, the game focuses on learning. New abilities and skill levels that are unlocked, you simply become better at your craft because of the things you must endure in your sniper role. Varying stances are learned, like bottle necking, which can create more stability in certain situations where the shot might not be possible otherwise.

The demo  showed off this technique on a mossy log. Trying to obtain a clear shot for a Russian General wasn’t a clear-cut situation. Instead, he was previously marked by the drone, opening a list of sniping locations to attempt the shot from .The drone was also able to observe the General’s conversation, identify his wife as being part of the Uranium operation, and hack linked camera system. There are many facets to each operation, and your pathway to the conclusion isn’t linear.

This is our love-letter to the fans. We’re just as passionate about the sniper genre as they are. So we really took to heart a lot of the feedback from the community. Sniper Ghost Warrior 3 represents an opportunity to do everything they wanted and more. This is about evolving the sniper genre.–Tukasz Misiurski, Publishing Director

To add to the abundance of options, ground vehicles will be available to drive. Sorry, but the choppers and jets are off limits. However, it was noted that it is possible to shoot down the helicopter pilot to bring it down. Outside of the man-made vehicles there is also wildlife running about. Wolves, bears and other creatures inhabit the forest. None of these were seen in the demo but were promised to make appearances.

If it seems like Ci Games has put a lot of thought into creating a real-life experience–they have. Each character has purpose and has been motion captured and voiced over. And, after playing the game hands-on and seeing the live commentary with the demo, I can feel confident in saying that I’m flat out impressed.

Overwatch Has A New Assassin: Widowmaker