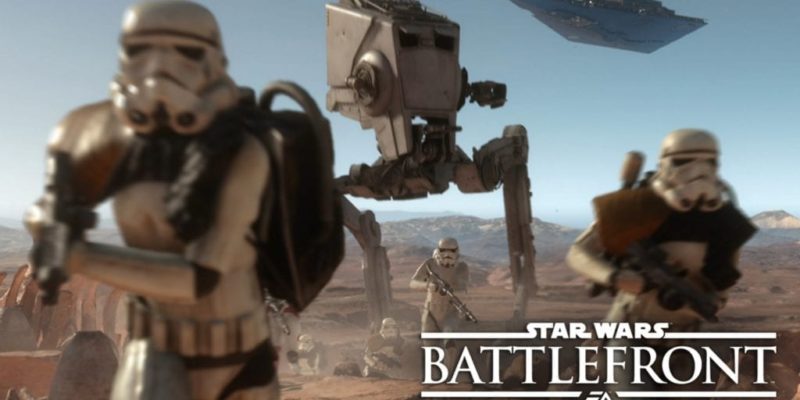 Today at E3, I was able to get some hands on time with the forthcoming first-person-shooter from DICE, Star Wars: Battlefront. Specifically, Sony was showing off Battlefront‘s “Survival Mode” on PlayStation 4.

Announced yesterday at Sony’s press conference, Survival Mode sees players hold out in a small area against multiple waves of AI-controlled enemies. The gameplay section available for play was on the desert planet of Tatooine, and the enemies here were storm troopers and AT-ST walkers.

At the beginning of the round, players can select their preferred load-out including weapons and special power-ups, such as a personal shield, a rocket jump pack, and ion torpedoes. Jumping into the game is a bit bewildering at first, especially in the split-screen co-op that my colleague and I were testing. The level is difficult to navigate due to its many cliff faces and trenches, and using the rocket boost proved necessary to avoid getting trapped against a wall.

Fortunately, the first wave of generic storm troopers posed little challenge, and we were able to dispatch them easily. The gun fighting is first rate, although, as a PC gamer, I find aiming on a gamepad quite difficult and finicky. Nonetheless, weapons have a real sense of recoil and impact that makes landing a headshot on your adversary rewarding. The AI is also fairly clever, and enemies will set up flanking maneuvers and attack from multiple angles simultaneously. The game is beautiful, with excellent animations and lighting affects. Small details like the old bones of a giant creature and the Star Destroyer looming overhead provide a real sense of place in the Star Wars universe.

Unfortunately, Tatooine is not the prettiest or most interesting of places, and it was easy to get lost in the level’s beige on beige aesthetic. For this reason, it’s a bit strange Tatooine was chosen as the demo level, rather than Star Wars‘ many more visually striking locations. In a game this pretty, it’s a bit of a shame.

As we progressed through the waves of enemies, things got harder very quickly. The third wave introduced an AT-ST walker that can really put out high damage on your character if you remain exposed. Fortunately, you can use an ion torpedo to do massive damage and finish it off with a flurry of blaster fire. It shook and shuddered realistically to each hit, before finally exploding in a triumphant fireball. Setting up such a torpedo shot takes time, however, which can give the storm troopers enough time to actually hit you. You can use a personal shield to deflect some blasts, but you can’t fire out while it’s in use. Health also drops quickly when hit, although it also recovers rapidly a short time later if you can stay out of harm’s way.

I regret to say we couldn’t finish the sixth and final wave, which proved too overwhelming for our poor PS4 gaming skills. Elite storm troopers with rocket packs and heavier weaponry began assaulting our positions from all angles, producing a barrage of fire that only quick and savage accuracy on our part could alleviate. Unfortunately, that was not in our skill set. I swear, if I had only had a mouse. But alas.

Star Wars: Battlefront is shaping up to be more than just a reskinned Battlefield. It feels different enough to provide a wholly new gameplay experience that feels right at home in the Star Wars universe. I look forward to living my Star Wars dreams (on PC) when it launches this holiday season.

While recording was not permitted of this alpha build, you can check out the gameplay trailer for this section of the game below: