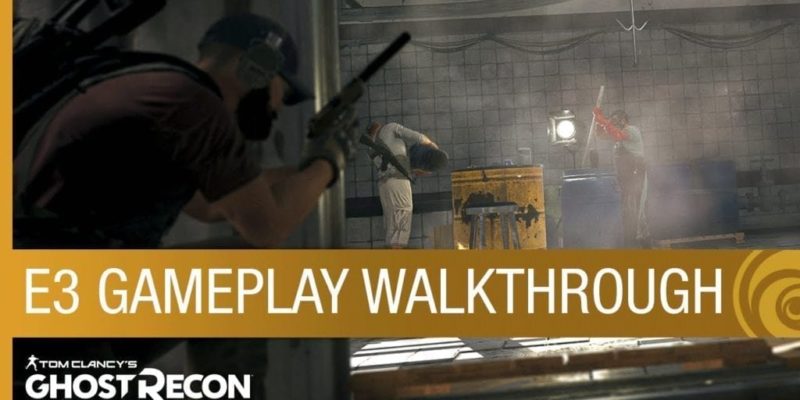 When the success of mission depends on teamwork, it isn’t always a peachy keen experience if your team doesn’t pull their weight. It all boils down to communication. And, when that communication breaks down, the mission can fail. As a team game, your success in Ghost Recon Wildlands heavily depends on your communication between your squad of four and relies on them working together to complete your objective.

On the E3 show floor, Ghost Recon Wildlands was playable at the Xbox booth. However, when it came to the build of the game, it was only on a PC with Xbox One specs. The game is slated for a release date of March 7, 2017, which, judging by the demo, is well worth the wait. There were visible cues from the demo that would suggest the game is in need of some heavy polishing prior to release date.  For example, there was noticable lag when aiming in first-person and the overall polish of textures left plenty more to be desired. The terrain was vast, but definitely lacking when it comes to detail and general flow.

The bit I played opened up with our squad on the side of a hill in the desert in the Agua Verde valley. We then moved to take out some targets before hitching a ride on a helo to our next position. One of the features seen in the demo was the use of your drone to scan for targets and acquire intel. This was a neat feature to find enemies that your team will target  for immediate drops, but it also allows you to start building your overall plan of action. Here, your squad leader can give commands which the others in the group can work together to execute in order to complete the mission with ease. But, if one or more people start to deviate from the plan, there’s a foreseeable future where the whole focus of the mission may start to unravel.

Your targets must be timed or you will alert other enemies.

In the demo, I volunteered to follow the squad leader to a higher vantage point to  position ourselves to take out the targets. The jail that we were going to be infiltrating was filled with explosives that could be shot, along with various enemies within. Alerting these enemies, we soon found out, started a chain reaction of alarms. The silver boxes atop these sirens could be shot to silence them. Also, you can shoot the locks where rebels are being held within the camp, allowing them to assist. It was noted that if you were to shoot them, they would be more unwilling to help you. In this case, I shot the lock and released them to our aid.

At the jail we were able to execute timed sniper shots to drop the guards, pick up the leftovers with our assault team, and leave the jail without any casualties on our side. After making our way out of the camp, we then followed the path to the intel where the target was located. This lead to the capture of the target, an officer that would later lead to the location of El Pozolero, a major objective. In fact, this was the threat seen in the gameplay demo that Ubisoft showed off in its press conference. The interrogation of the target was delivered a better sense of immersion as you could choose who interrogated and when enough information had been received. It was then time to load everyone up into vehicles and make our way to extraction.

While the demo offered up some interesting gameplay, I did feel that the build  was far off from potential release. The cross hairs of the sniper rifle left vapor trails as I panned for enemies. Also, the first-person gun mode was also less than par. The scenery was mostly polished, but did see some bland textures within houses and environments. This is important as there is a large number of environments with over 11 ecosystems.

It was far more underwhelming than the trailer, which was very surprising to see. But, the gameplay felt very “Ghost Recon” with its squad based, tactical interactions that play out in a more bounty-hunter-type atmosphere. And, if your team does not work with one another, I do see this as a breaking point for the game.  Nothing will work as intended unless the group cooperates with one another and avoids succumbing to the perils of a simple interaction between teammates.