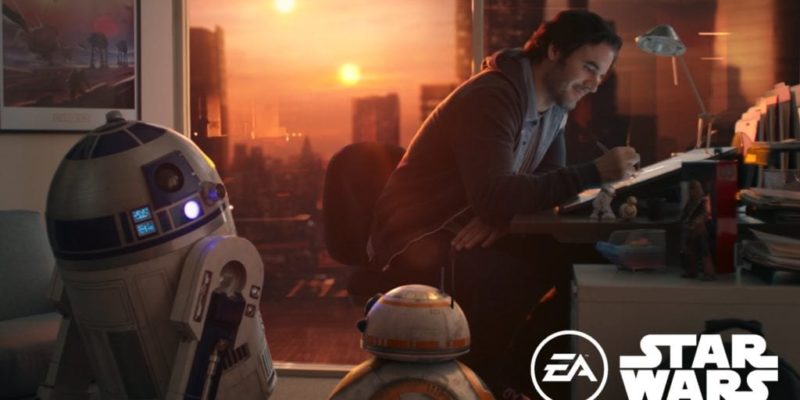 At EA Play, EA have offered up a brief rundown of all the Star Wars stuff that’s coming. I suspect you’ll already know about most of this, but for the hell of it, here’s a quick recap.

There’ll be more stuff coming for Star Wars: Battlefront and Star Wars: The Old Republic, obviously; the former will be getting new characters and new eras, like Lando Calrissian and Cloud City (which are due out later this month, I believe). There’s also apparently a new Battlefront game coming, but if that was mentioned in the EA Play presentation, it was in a very throwaway one-line comment.

Perhaps more interesting are the games coming from Respawn and Visceral. Visceral are doing an action-adventure offering up an original narrative with brand new characters, and if the concept art and early in-game footage from the video (below) are to be believed, I think it’s going to be set in the Galactic Empire era. I might be wrong, but I’m pretty sure that’s the Empire’s flag flying in one of the bits of footage. Of course, that might also be misleading; it might be the early age of the Empire, or possibly post-Empire but in an area where the bureaucracy hasn’t collapsed, or… well, lots of possibilities.

Visceral’s game is also being made with the aid of Doug Chiang, vice president and executive creative director at Lucasfilm, which should hopefully bring an air of authenticity to the proceedings. Visceral are apparently aiming to create a new Star Wars story rather than just offer up a game in a Star Wars setting, so fingers crossed. It’s due 2018.

Finally, there’s Respawn. Very, very little is known about what they’re working on, except that it’s a third-person action-adventure and it’s set in a “different era.” Assuming the mo-cap stuff on display in the video wasn’t purely fictional, it will have lightsaber fights.

You can have a look at EA’s “look at the Star Wars stuff we’re doing” video below. Just don’t necessarily expect anything truly surprising.