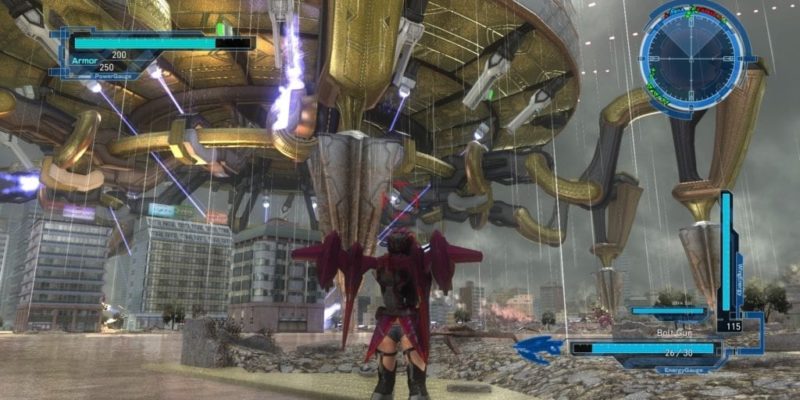 The alien invasion is one of the most common tropes in science fiction. Flying saucers come from out of the sky and the people of Earth struggle to withstand the onslaught. It’s a very familiar setup that we’ve not only seen time and again, but in multiple games in this very series. Does Earth Defense Force 5 have the goods to justify another purchase or is it a case of been there, done that?

Earth Defense Force 5 might make you think that it continues the story of the previous game, but, much like the third game in the series, it’s actually more of a reboot. Aliens have come to Earth and it’s up to you and your compatriots to stop them in their tracks. There isn’t much plot here, although there is more than usual. The game opens with a tutorial with a surprising amount of mandatory dialogue. The first two missions mostly revolve around you listening to other soldiers or following them in order to progress. Afterward, though, it’s business as usual.

You have a choice of one of four classes in Earth Defense Force 5. There’s the ranger, who’s the typical soldier. He fights with assault rifles, shotguns, rocket launchers, missile launchers and the like. He also gets access to certain vehicles. Then the wing diver, who uses energy weapons and has a jetpack. You’ve got the fencer who fights with powerful melee weapons, shields, and big guns. Finally, there’s the air raider, who mostly calls in strikes with markers. All four classes are strong in their own right and can all get you through the solo campaign. 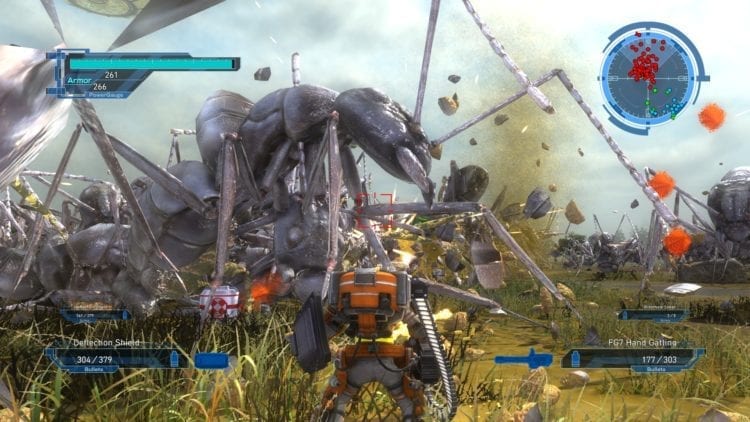 Each class can bring two weapons into the field, save for the fencer who can bring four. Since you generally only bring two weapons, you need to make sure you pick ones that will get the job done. The missions all drop you on a map and task you with either killing all of the enemies or doing a certain amount of damage in order to finish. Different enemies are naturally easier to deal with when you use certain weapons over others. When facing a swarm of foes, for instance, you’ll either want to use wide-ranged explosives to deal with them from a distance or weapons that are more effective at close range. But you’ll need to pick those weapons based on what you’re up against, which may require going in and then backing out to the menu to give yourself a more appropriate loadout.

The foe you know

There are a lot of different enemy types too, so you’ll need to figure out what works against what. Earth Defense Force 5 throws giant ants, spiders, flying saucers, frogs, hornets and more at you. You’ll also come up against enemy spawn points that you’ll need to destroy, gun emplacements, and massive bosses. You’re not alone, however, as there are generally friendly NPCs that will fight with you. During particularly hectic battles, the game truly makes you feel like a small part of a huge fight.

And boy, do battles get hectic. Earth Defense Force 5 is one of the busiest, most intense action games imaginable. You don’t just get tasked with fighting a few enemies at a time, but hordes upon hordes. The game is kind of like what the Dynasty Warriors games would be if the peons all attacked you at once instead of standing in a spot and doing nothing. The amount of carnage that takes place onscreen is like nothing else out there and is truly a sight to behold. 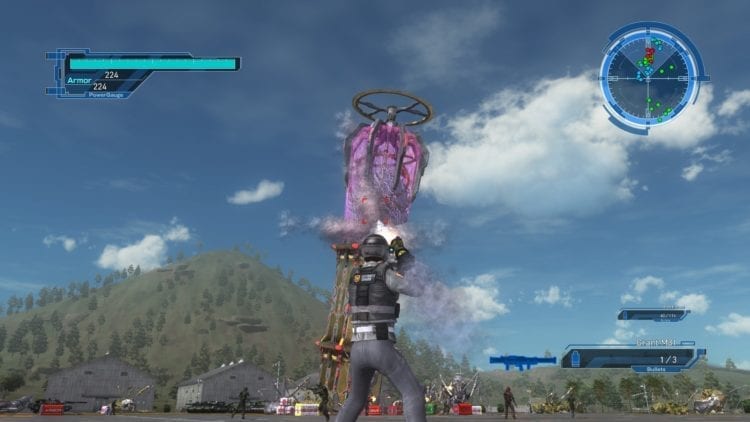 The power is yours

One thing about games in this series is that the developer, Sandlot, had a history of putting these games on consoles that simply weren’t up to the task of running them properly. But being able to play without those restrictions and a high framerate really does make a massive difference. Levels are often filled with hundreds of enemies and explosions, projectiles, and all sorts of insanity going on. The game might not look like much when there isn’t a whole lot going on, but when it pulls out all the stops, it’s really something to witness all of that go down without a hitch.

Thankfully, the game controls very well. You can play it with a mouse and keyboard or controller, but due to how aim-intensive Earth Defense Force 5 is, I strongly prefer the former. The weapons feel great to use and the action is visceral and very satisfying. All-in-all, though, it’s a fairly basic game mechanically, despite some hidden depth. You pick guns and you shoot monsters with them until there aren’t anymore. But the game is so much fun if you’re into this sort of thing that the simplicity of much of it doesn’t really matter.

Not that the game is flawless, mind you. One thing that can be said about the series is that it’s very iterative. It’s impossible for longtime fans not to notice just how little has changed in many respects. Many of the locations are extremely similar to those in the last game and almost all of the enemies return as well. There are some improvements, though. Enemies have always dropped weapons and armor boxes, but now dying during a level won’t result in you losing everything you picked up. Additionally, picking up crates that contain weapons you already own can level that weapon up, which can keep older weapons useful instead of you needing to move on to something else to hurt later enemies. 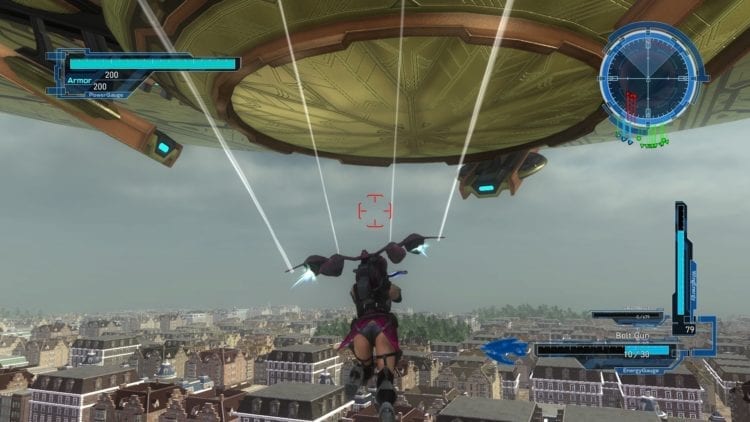 The character classes have also seen some tweaks. The ranger can now run and the wing diver has the ability to quickly dash in a specified direction. The way the fencer’s dashes and jumps are utilized is also tweaked. However, the game is mostly very similar to its predecessor. Make no mistake, though, this is the best game in the series yet and it’s an absolute blast to play.

Rough around the edges

Visually, Earth Defense Force 5 isn’t great by a longshot, but it gets the job done and even improves on the last game in some surprising ways. The textures are all high-res, although not necessarily up to modern standards. The game has wet surfaces and reflections as well along with a really solid draw distance that allows you to see your enemies from very far away. Enemies now show physical damage when you attack them and parts of their bodies can even be broken off. This even includes small pieces of an insect’s outer parts. This is definitely the closest Sandlot has ever come to making a modern-looking game and it runs fairly well on weaker hardware too.

Not surprisingly, there’s not much in the way of graphical options either. You can set anti-aliasing and anisotropic filtering, but there isn’t much else. If you want to reduce certain settings to get a better framerate you just can’t. I also had a crash while playing the game that completely hard locked my pc, requiring a restart. This only happened once, but it’s something to be aware of. 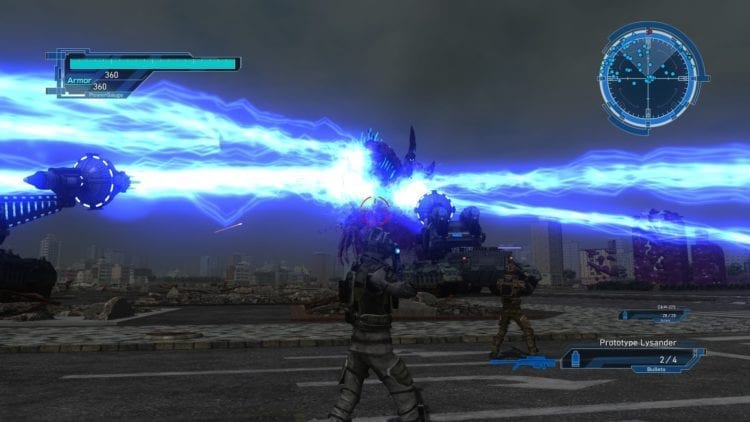 I’ve always enjoyed these games and Earth Defense Force 5 is no different. It isn’t exactly the most technically-accomplished or complex game around, but absolutely nobody does this type of game better. With over 100 missions, five difficulty levels, and online co-op there are potentially hundreds of hours of gameplay here as well. If you like epic action games you kind of owe it to yourself to give this game a look. It might not reinvent the wheel, but it’s a really kick-ass wheel anyway.

Earth Defense Force 5 is very familiar, but it's the best game in the series and a huge amount of fun. Fans of action games will find a whole lot to enjoy with this one.