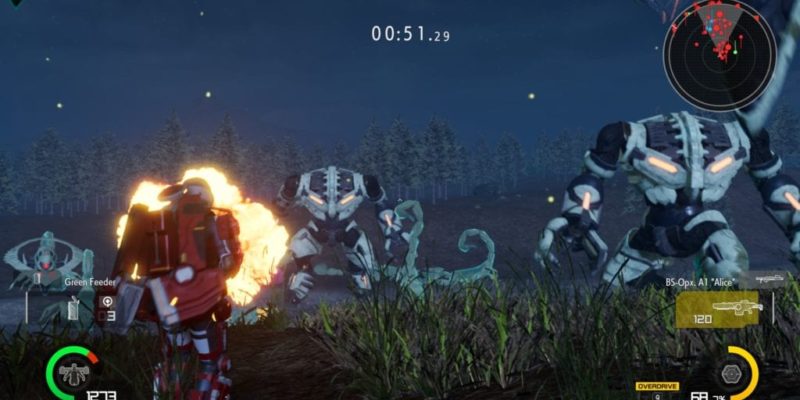 The Earth Defense Force series has always been a niche one. It was so niche that the first two games didn’t even get released in the US, which prompted the developers to make a full-budget game to try and make more headway. After being disappointed with sales, an American company was given the reins to make an entry that would appeal to westerners. The response wasn’t kind, so another developer is trying again. Is Earth Defense Force: Iron Rain the game that will catapult the series to international success?

The answer is, “probably not.” And the reason for that is because it’s very similar to the mainline games. Also, I’m not sure why anyone with this much money to burn thinks that EDF wasn’t a giant success because it was “too Japanese,” when it’s just a third-person shooter about shooting giant insects and robots. That being said, Earth Defense Force: Iron Rain is a good entry in the series that does a decent job of upping the production values and making some welcome changes.

While Earth Defense Force 5 initially released in December 2017 in Japan, it didn’t come out in the West until a year later. Earth Defense Force: Iron Rain came out only four months later, meaning that other territories got two EDF games within six months. This was questionable because it meant that both games had to compete with each other, which puts Iron Rain in a bad situation. 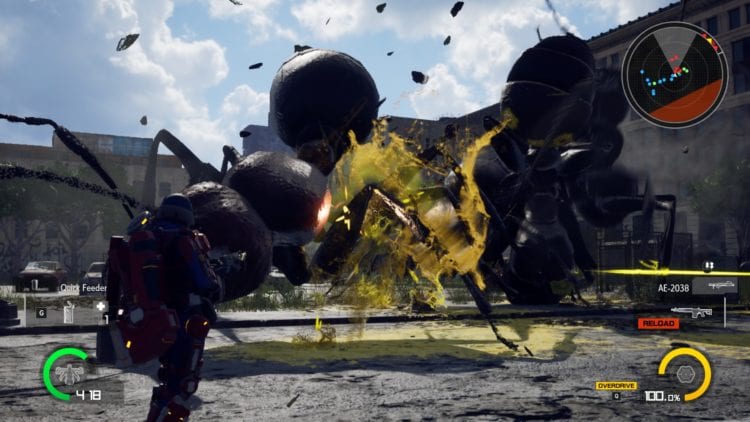 A whole new can of paint

So, what’s different about Earth Defense Force: Iron Rain? The graphics are the most apparent. While other games in the series look very dated and janky, this one looks fairly nice. There’s a level of graphical polish here that is completely absent in the mainline games. This one also has a stronger emphasis on narrative and cutscenes. As in, there are plotlines and actual cutscenes in the game. There are even characters with names who have arcs! While that probably doesn’t seem like a big deal, it’s unusual for an EDF game.

The story isn’t particularly good, mind you, but it does have some surprisingly solid writing and theming. I wasn’t expecting there to be so much backstory and lore in an EDF game. You also fight other humans in mechs sometimes for reasons that have a lot more to them than most series fans would think. 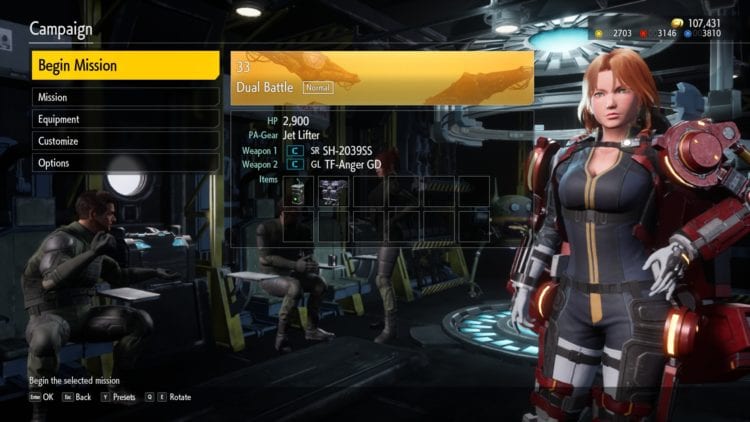 The whole “EDF built for Western audiences” thing is pretty pointless. Earth Defense Force: Iron Rain is still a game where you go into a map and kill all the giant bugs/robots/flying saucers in it. But they’ve done a lot to make it feel like its own game. For starters, classes are gone. Instead, you create your character, face and all, and their outfit.

In place of classes, you can put your character in one of four suits that mostly mimic the ones from the main series. You’ve got suits that play like the Ranger, Wing Diver, and Fencer, respectively. There’s also a new one that focuses on using needles to pull yourself around like an Attack on Titan character and allows you to summon a giant creature to ride when you enter the game’s “overdrive” super mode. Additionally, characters can use any weapon or bring any item they want, which helps to separate the game in a big way. You can even bring healing items, a great addition.

My favorite change, however, is the way health works. In other EDF games, you have to pick up armor drops during missions, which will add to your armor total. This meant that skipping difficulties was a pain, as you’d need to grind for more armor. In Earth Defense Force: Iron Rain, you instead get money for completing missions. You also unlock weapons for purchase the same way, instead of picking them up in the field. You then use your money to buy health upgrades and equipment. I honestly am not fond of having to buy all of the weapons, though. They can get grossly expensive, meaning that it’s risky to try one out and see if you like it. 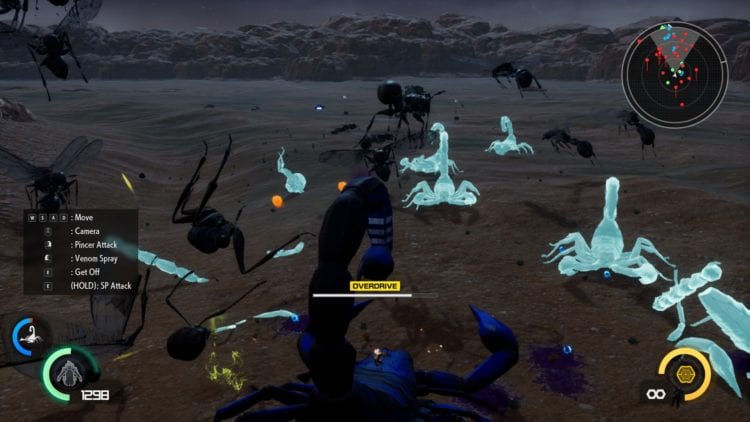 But break other stuff

Not everything is an improvement, however. Your character can use any weapon, sure, but there are markedly fewer weapon types. For instance, most weapon types similar to that of the Wing Diver are just gone. The rapier is a personal favorite of mine and there isn’t really anything close to it here. And the lack of classes meant that I was mainly sticking to just a few weapon types for the entire game. That and picking weapons up in the missions and seeing what you got was fun in and of itself, and it’s just gone.

The biggest misstep has to do with the combat, though. The EDF series is about fighting giant things, and other games made it hard for you to get flinched. But Earth Defense Force: Iron Rain decided things need to be more realistic, so you get flinched constantly. If a giant monster steps near you, you’ll flinch. Bump into one? You flinch. And a lot of the weapons are built around holding the attack button down to continuously fire. And if you get flinched while holding it down, you stop shooting. It makes a lot of the weapons basically useless.

And on top of those issues, Earth Defense Force: Iron Rain isn’t as fun as the last couple of games in the series. Don’t get me wrong — it’s a good game and a solid EDF, but it doesn’t nail the feeling of being smack-dab in the middle of a huge war, with insane levels of chaos erupting around you constantly. On its own merits, it’s fine, but as I said earlier, it’s going to be directly competing with EDF 5. 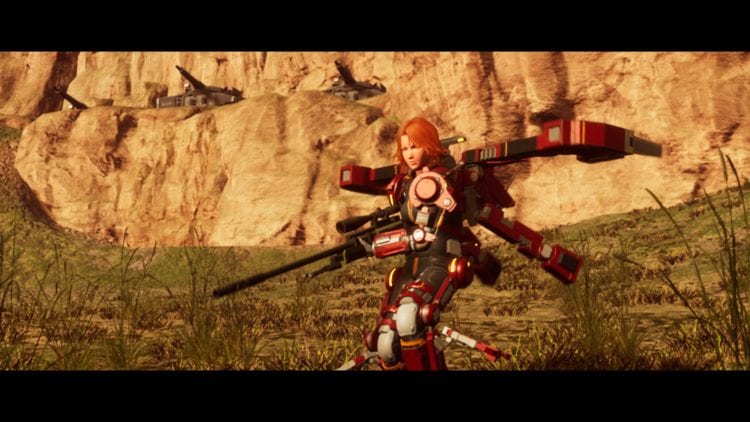 Not the better choice

And that’s what it comes down to. Whether you’re a fan of EDF that hasn’t picked 5 up yet or you’re new to the series and want to start with one of the newer entries, 5 is very clearly the better bet. It’s got way more content and better gameplay. Earth Defense Force: Iron Rain has some really good quality-of-life additions and some nice graphics, but those can’t make it a better investment than 5 is.

In all honesty, the people who are most likely to want to play this game are the ones who’ve already played 5 and want to see EDF done well by a different developer. Its differences and extra levels of polish make it a pretty satisfying experience, even if it’s much shorter. It’s literally half the size of 5. Playing through the whole game might take you about 15 hours for a single playthrough, but it is fun. And this is a really good port too that runs even better than EDF 5‘s, even if I hate getting flinched every five seconds.

Iron Rain is a good game on its own merits, but it's simply not as good as EDF5. It is a pretty different experience that's easy to recommend to series fans that are hungry for more, though.