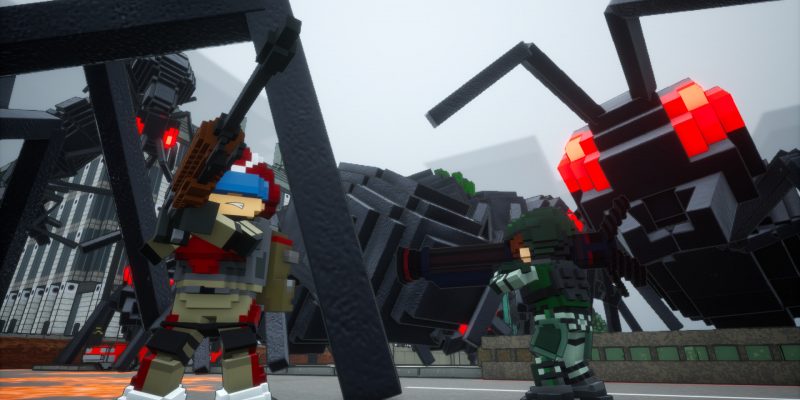 The next entry in the long-running Earth Defense Force series is getting a drastically different visual style. Last week we were able to preview the gameplay for Earth Defense Force: World Brothers courtesy of the game’s publisher D3. While the new looks may be jarring at first, the core gameplay of the EDF series is very much intact.

Instead of the usual ‘realistic’ 3D art style the series is known for, World Brothers adopts voxel graphics. For those unfamiliar with the term, think of Minecraft which popularized the style. The game has been out in Japan since December of last year and is finally making its way West next month. During our hands-off preview of the game, we were guided through three missions by the EDF series game producer, Nobuyuki Okajima. In the game, players can recruit teams of four and go on missions to wipe out alien bugs across various different locales.

The first mission starts off very simple and shows two characters that should be very familiar to fans of the series. You start the game as an EDF Ranger, a grunt soldier with very basic attacks and movement. The characters in the game look like Roblox characters wearing Minecraft armor. Enemies also share this same art style and buildings and enemies alike will explode into blocks of debris. Very quickly you rescue another classic EDF character class, the Wing Diver. This unit can fly around on a jetpack and shoot lasers. During missions you will frequently rescue other characters and this is how you unlock new characters or “classes.” Lock and load, brothers and sisters

Each character has a unique skill that only they can perform and an SP Move. SP Moves, i.e., super moves, can be used after killing enough enemies to get your SP Meter to full. You will also be able to collect random powerups and health recovery items during gameplay. There are 60 missions in the game, with three difficulty levels for each one: easy, medium, and hard. By beating the game you will unlock two even harder difficulties. A sixth difficulty mode called “Armageddon” will be released via DLC. Friendly fire, an EDF staple, will remain in the game. The higher the difficulty, the more damage friendly fire will do. The post-launch Armageddon difficulty ups damage by friendly fire to 100%.

You can have a maximum of four characters on a team at once. Any new characters you unlock will be added to the character select screen for future use if your team is full. Each character also has their own unique weapon that can be swapped out for others is you want. Characters level up individually, and weapons level up simultaneously with them. You can also unlock accessories that characters can equip before a mission. These range from different color schemes for existing costumes, to completely unique items that characters can wear. Accessories can be swapped between any character you want and give your characters stat buffs or even new skills. You can also pick an emblem for your team from the mission select screen.

The “World” aspect of World Brothers comes into play when you see some of the unlockable characters. Countries from all over the world have representatives — putting the “Earth” in Earth Defense Force. It only makes since that squashing alien bugs would be of global interest. All of these new characters share the same naming scheme, that being called “Brother” or “Sister.” The right to bear arms. Get it? BEAR arms?

During this first mission we saw Tulip Sister and Amigo Brother being rescued and added to the team. Tulip Sister looks like a representative from Holland, wooden clogs and all. She wields a comically large laser bazooka and can summon whirlwinds with her SP Move. Likewise, Amigo Brother dresses like a classic Mariachi and throws bombs at an upward angle to destroy enemies. His SP move summons a box around him that teammates stand in to have their attack power increased. We also saw another character rescued for later use, Royal Brother, who looks like a Buckingham Palace guard, complete with the big, furry hat.

There are no traditional ammo pickups in Earth Defense Force: World Brothers. Instead, characters regain ammo when they’re not being used. Okajima suggested switching characters frequently to make sure you never run out of ammo. When switching characters, your newly selected character will simply replace the spot where the previous one stood — you don’t have to run back to where you were before. You can also whistle to bring your teammates closer to you if you need to regroup. Beyond the whistle, there are other emotes that include yelling, multiple different gestures, and a surprisingly large catalog of songs. When one character begins singing, the other members of the team will join, and it is pretty neat to see.

In a later mission we got to see the range of characters available. My personal favorite was Bear Brother, a man in a bear suit with large novelty zipper sticking out of the back, who slashed enemies with his huge claws. There was also Ninja Brother, who Okajima said was a very popular pick in Japan. Ninja Brother is one of the few characters who use melee weapons, and he also had a teleporting dash attack. Since characters can switch weapons though, Okajima suggested giving a fast character like the ninja a gun. Now this hyper fast character can attack from afar with a projectile weapon. This level of open-ended customization lets players experiment with characters and team setups as much as desired. I asked Okajima about why the team decided to switch to such a radically different art style. He said that, after working on the series for so long, they wanted to do something really different and out there. The team hopes that this more cartoon-like art style will help draw in newer, and maybe younger players. The team also expressed the desire that these new fans will then go back and try some of the more traditional EDF games. World Brothers‘ new art style should also be helpful if you have a phobia of creepy crawlies.

I also asked if — since the game features such a Minecraft-like art style — players can expect any modes to let them create their own levels. Okajima responded that EDF is about destruction, not creation, so a mode won’t be included in the game, despite where the game takes its visual inspiration. Then, as if to really drive this point home, Okajima used Ninja Brother to enter a giant mech in the level and began taking down entire buildings and swaths of giant bugs.

That was where our look at the game and ended, and it was definitely a high note to end on. Longtime EDF fans will probably be turned off by Earth Defense Force: World Brothers and its new art style. However, it was clear to me that (even just a little bit of time with the game) the classic EDF gameplay still shines through. All of the wacky new characters just add to the chaos the game is known for, adding a new layer to the enjoyment. Cleaning up Earth will keep you busy

Between 60 missions and over 100 characters available, there will be lots of alien blasting to go around when Earth Defense Force: World Brothers releases next month on May 27. The game also supports four-player online co-op. Sadly there is no cross-platform play as of this time. But you can at least have fun blasting bugs with your PC buddies. The Steam page isn’t up for the game just yet, so keep an eye on the game’s homepage and social media for when it does if you want to blow up some voxel space bugs.