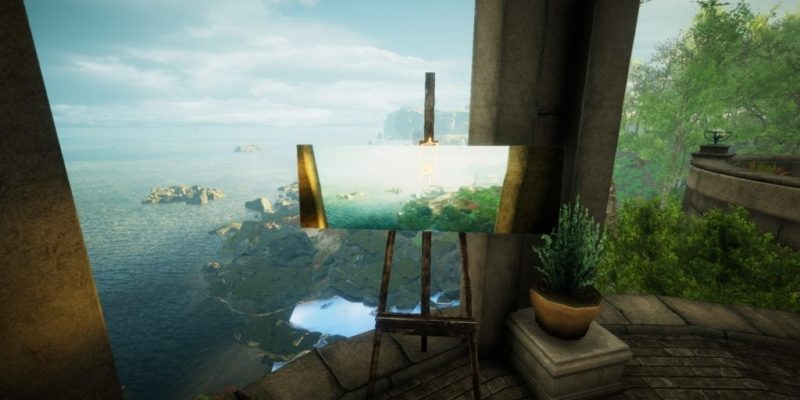 If Eastshade has taught me anything, it’s that open-world RPGs don’t actually need combat to work. Most games in the genre are built around fighting, so playing one that has literally none whatsoever seems like it would be a tough pill to swallow. However, smart design and good world-building are more than enough to make up for one of the genre’s main staples, even as the game’s technical issues pile up.

Eastshade starts with your self-named character as they’re on a voyage to the eponymous land. Your mother had traveled there in the past, and your goal is to paint four memento pictures of some of the things she remembers most. That’s right. You’re not a fighter. You’re a painter. Along the way, you’ll interact with and assist a large cast of characters while moving about and exploring the game’s open map, which is brought to life with some really lovely visuals.

How does playing as a painter work here? Well, it’s extremely simple and works more like a camera than anything else. You need to craft or purchase a canvas, then select the on-screen area you wish to paint. After a few seconds, it is then replicated on a canvas in front of you. You can either store your mother’s memento paintings, fulfill painting requests, or simply paint whatever you feel like, so long as you have the means to do so. While it’s a bit disappointing that you don’t actually do any of the painting yourself, the fact that your character is an expert in realism makes this understandable. 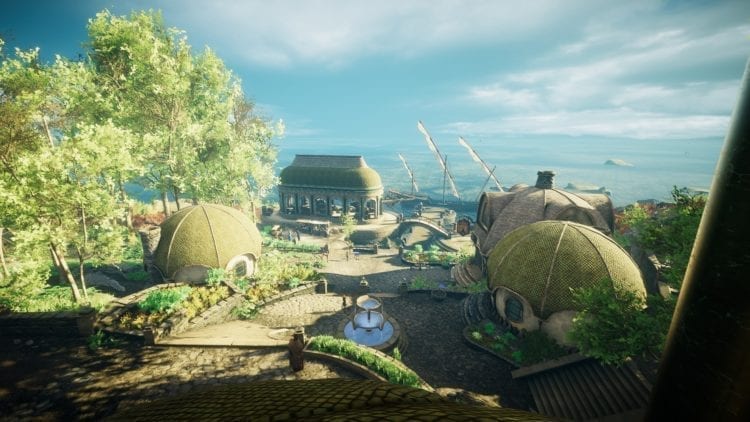 One of the more clever things about Eastshade is the way it handles experience. Intead of leveling up, you accrue “inspiration” that fills up a small meter. Once that meter fills, you receive a single inspiration point, which is enough to paint a single picture. If you’re hoping to just paint everything you see right away, this may disappoint you, as you can’t do that here. However, this works wonderfully in regards to the game’s design, as it forces you to more carefully consider what to paint. You can feasibly get yourself into a spot of bother by not doing so.

Eastshade uses a standard RPG quest system. The game’s animal-people are fully-voiced and offer a multitude of different tasks. Yes, many of these revolve around painting them specific pictures, but a lot of them don’t. Rewards for completing these include inspiration points, money, or new items for your inventory. And there are plenty of items to collect, craft, and even buy. I didn’t expect to see this level of depth, but the game feels very complete on that front.

The world is dotted with crafting items to collect, such as wooden boards, fabric, plants, sticks, and many others. For instance, you’re going to be crafting a lot of canvases, which require boards and fabric. But you also get blueprints to make other items, such as campfires and boats. Eastshade even has cooking in the form of brewing different teas, which have effects such as fast-travel and protection from the cold at night. 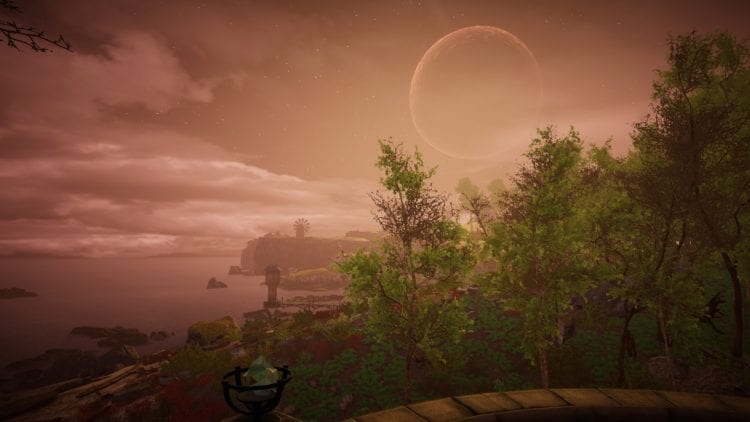 Despite that, you won’t find any danger in Eastshade at all. Absolutely nothing is hostile, there are no fail states, and you can’t even get hurt. The aforementioned coldness of night is one of the only things you need to keep an eye on, but getting too cold will just warp you to an inn where you can go to sleep. Later, you can buy a coat that lets you ignore the cold and explore without a care in the world.

Despite the lack of threats, Eastshade doesn’t hold your hand at all. In the beginning, you’ll have no means of ascertaining your whereabouts, as you don’t get a map until doing an early quest. And even then, the game doesn’t show you where you are on it or even give you a compass. The world isn’t so big that this is a large problem, and it’s easy to familiarize yourself with your surroundings regardless of there being no hand-holding. However, the game should really offer a compass, as I can’t think of a good reason not to have one.

Quests are also engaging and varied. There are the typical “fetch x number of items” quests, sure. But there are also intriguing things to find simply by exploring. Once I built a raft, I made sure to visit an inn across a river I couldn’t reach before, only to find the inn locked down due to a theft I had to get to the bottom of. Many quests also grant you items that you need to complete other quests. As such, it’s a good idea to try and do them all. 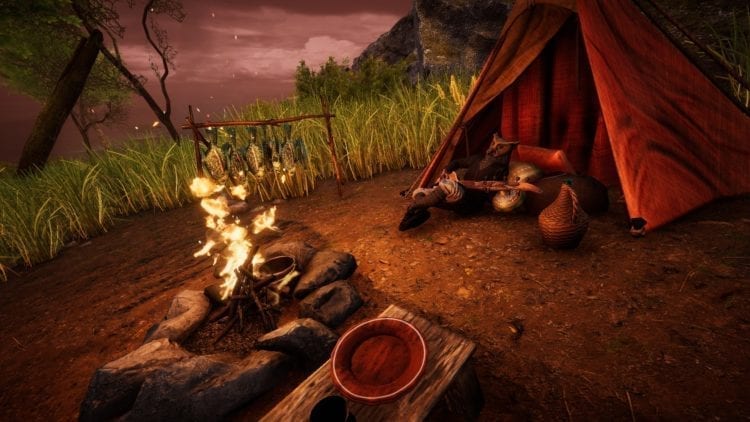 Unfortunately, a large host of technical issues plague Eastshade. The most noticeable of these is the game’s truly unwieldy performance. The framerate stutters and dips nearly constantly and in unpredictable ways. Sometimes I can walk through an area, and my fps will have no trouble. But mere minutes later, the game turns into a slideshow. It is badly optimized and did this regardless of what preset I had my graphics set to.

Then there are the constant issues with crashing. Literally half the time I went to sleep or tried to use a contextual transition for a slight area change, the game would crash. It also crashed every time I went to quit as well. On two occasions it crashed, I booted it up again, and it crashed again while booting up. Needless to say, I had to restart all the time, which put a damper on my experience.

I had a host of other problems too. Sometimes if I painted and then reloaded the save, the painting had somehow traveled back in time with me, giving me a free canvas as well. I also found multiple objects with no collision detection, such as a door behind an inn that I could walk straight through. That one trapped me and forced me to load a previous save. Suffice to say, Eastshade needs a lot of TLC. 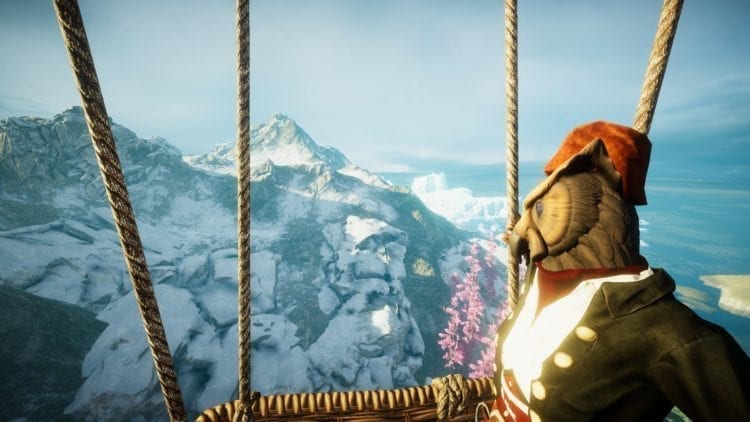 I honestly love this game, though. The technical issues were a big pain, but I loved the gameplay, the stories, and the world. This is a special game with a lot of beauty and personality on offer. It’s also a good length, taking about a dozen hours to beat and a few more if you want to see everything or finish all of the painting commissions. If the developers fix its bugs in the future, you can safely add another half point onto my score.

Eastshade may have some serious technical problems, but it's a wonderful game that deserves a lot of attention.

Crackdown 3 Co-Op Reportedly Locks Framerate To 30, Even On PC

By Nicholas Montegriffo1 day ago
Features