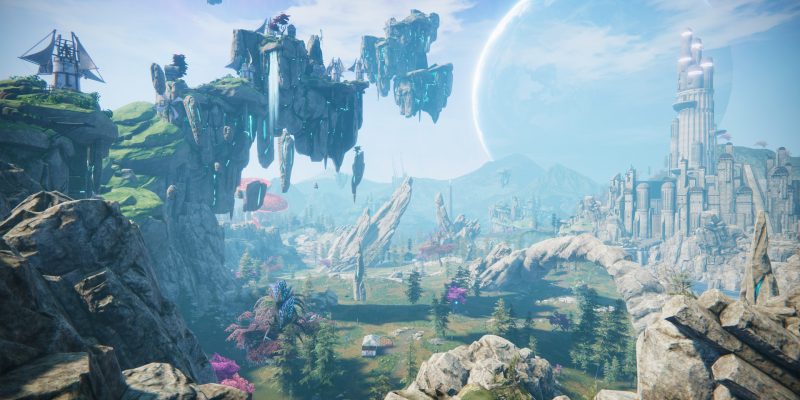 Edge of Eternity is an RPG from developer Midgar Studio and publisher Dear Villagers. After being part of Steam’s Early Access program for a couple of years, it’s finally ready to launch. Previously, the game only had six chapters during the Early Access period. Now, the release build completes the story, boosting your adventure to eight chapters.

What follows is a long and arduous journey for your characters. There are a few highs and also some lows. It also bears mentioning that Midgar Studio is only comprised of 10 developers. As such, an indie RPG of this magnitude is bound to be a little rough around the edges.

Edge of Eternity takes place on the planet of Heryon. Think of this as your quintessential fantasy world filled with majestic beasts, magic spells, and people trying to live an idyllic life. That peace, though, is shattered upon the arrival of the Archelites. These sci-fi-themed invaders bring death with their armada of ships, squads of robots, and their ultimate weapon, a plague known as the Corrosion. The disease is both technological and organic, turning humans, animals, and plants into decrepit, burnt zombified cyborgs.

The story begins when Daryon, a soldier who is defending an outpost, receives a letter from his sister Selene. Daryon’s mother has contracted the Corrosion, and he attempts to return to his childhood home. Unfortunately, Archelites ambush his squad and his friends die one by one. Since you don’t get to spend a lot of time with these initial characters, their deaths aren’t as impactful as one would think.

A short while later, a mysterious warrior known as Orobos appears and it seems that he’s attempting to empower himself. Daryon is also afflicted by an unknown power, one that’ll manifest in due course. All of these are just part of the prologue. 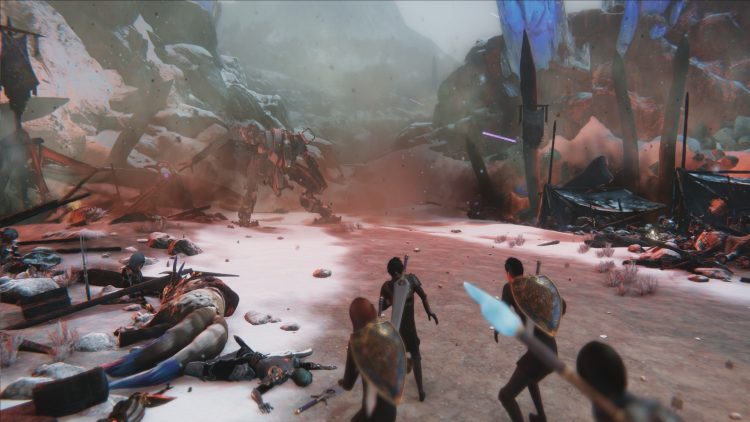 With all these details and bits of exposition thrown your way, Edge of Eternity can get very confusing fast. It doesn’t help matters that the pacing is uneven at times. For instance, although Daryon and Selene reunite during the game’s first chapter, they’re the only two party members you’ll have for the next several hours. What then follows is an epic journey that suddenly slows down as additional details of the story present themselves in bits and pieces.

You’ll visit new locales, many of which are wondrous to behold. I simply can’t stress enough how much Midgar Studio succeeded in crafting a dazzling world filled with many biomes, creatures, cities, and sweeping vistas. All of it is striking to look at, and the musical score is pleasing to the ears. Still, by the time you’re grinding for extra experience points or you’re doing your tenth monster-hunting sidequest, you’ll start to realize that the game was attempting something at an epic scale, only to stumble a little as reality sank in. For instance, there’s a good chance that the first few monsters that you fight will look unique. As you reach new zones in later chapters, you’ll notice that mobs tend to be reskins or renamed variants. It gets even more glaring the further you go in the game. There are some locations that simply aren’t fully utilized (i.e., you might visit a zone only once). And yet, successive main quest objectives have you to return to locations from previous chapters.

It’s also a misnomer to think that Edge of Eternity is a true, open-world RPG. Although it has massive zones filled with enemies, resource nodes, and the occasional sidequest, these regions are separated by narrow pathways and mountain passes that you need to traverse. It’s akin to seeing several extraordinary locations, only for most of the critical junctures to occur in cramped hallways, linear passages, and small caves. At the very least, you’ll find a few ruins with brain-teasing puzzles to earn more rewards, and you’ll eventually have a Nekaroo (giant, twin-tailed cat) mount. Let’s face it, cats are always awesome. 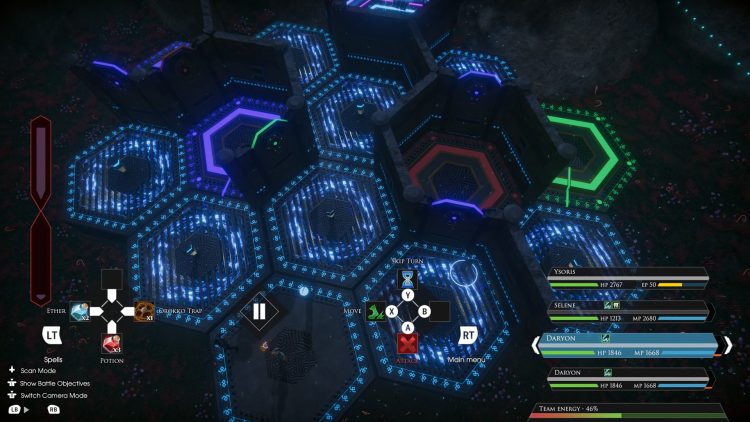 Battles in Edge of Eternity

Edge of Eternity has turn-based battles. Think of the active time battle (ATB) system in the Final Fantasy series and you’ll feel right at home. Daryon, a melee specialist, and Selene, a spellcaster, need to wait for their gauges to fill up before they can attack. Likewise, you may use attacks and abilities to disrupt enemy spells (though the same can also happen to you). Moreover, there might be optional requirements during fights, such as not taking damage, killing the marked opponent first, or hitting targets from the back. Completing these tasks nets you rewards like extra gold or loot.

Since battles take place on hex-based grids, characters can move in multiple directions to get in position. Additionally, you may have multiple characters on the same hex. As you explore, you’ll even notice objects in the game world and, should a battle take place, they’ll be present on the tactical map as well. These include turrets, ballistae, poisonous plants, flame traps, and, at one point, an artillery cannon. Several boss fights in the game also provide new strategic options in relation to the fight’s mechanics. There are those that have you sending an electric surge into pylons, activating switches to form barricades, and lengthy encounters against multiple enemy waves. 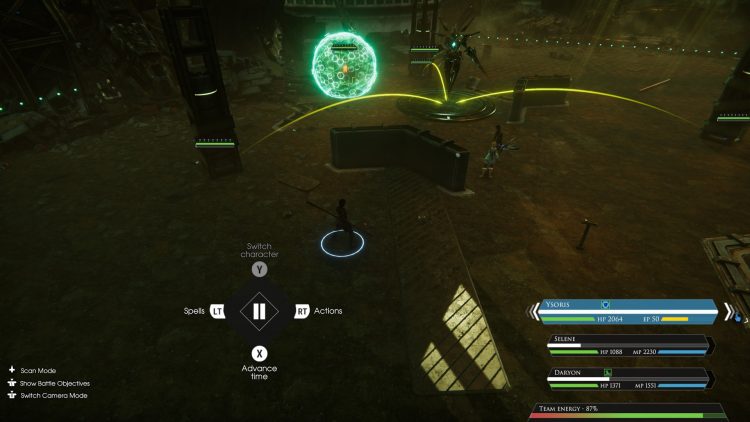 After many hours, Daryon and Selene encounter new party members, each with his or her own unique capabilities. For instance, the sky pirate Fallon uses firearms that she needs to reload after expending all her ammunition on skills. Meanwhile, Ysoris can use his expertise with machinery to hack systems. Though, sadly, the opportunities to do this are few and far between. Then, there’s Theia, a construct that has to continuously attack just to build up energy to empower abilities. Characters also have an ultimate skill, like a limit break, to quickly eliminate opponents.

Overall, Edge of Eternity gives you plenty of tactical options to take down your foes. The only downsides relate to the aforementioned pacing (where you’re limited to just a few characters for long periods) and the usual grind that makes repeated bouts tiresome. Speaking of tiresome, Edge of Eternity does have an amazing feature that lets you speed up time during battles. Regrettably, you can’t skip or speed up the animation sequences whenever you use ultimates. 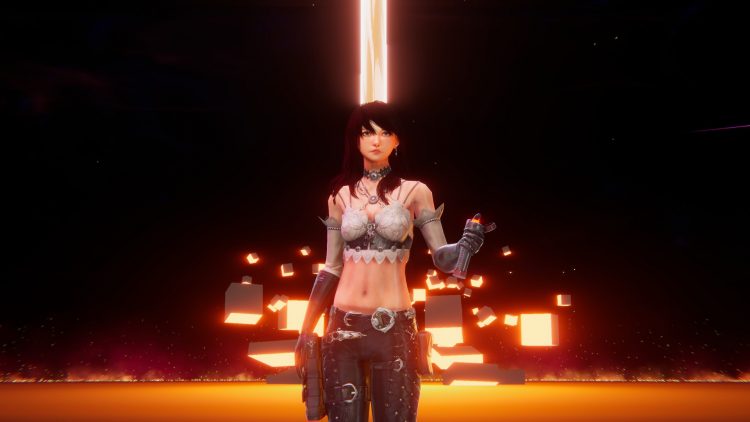 If you do wish to get the most out of your characters, then you’ll also want to level up new weapons and use the gems that you acquire. Each weapon in Edge of Eternity has its own socketing system similar to Final Fantasy X‘s Sphere Grid. The higher the weapon’s level, the more nodes become available. You simply socket the matching gemstones which might provide a character with new skills.

Likewise, you might want to check out vendor items and crafting options (i.e., weapons, armors, consumables, and materials). It’s almost expected that you’ll find new blueprints in chests. Some, such as crafting recipes for legendary/orange weapons, would even show up halfway through the game.

The problem, though, is that Edge of Eternity likes to dish out information about the narrative, but gives very little when it comes to items and resources. The game neither has a bestiary menu nor a panel listing the rough locations of crafting components. As such, you’ll end up just wondering where certain items could drop from. To be honest, I actually finished the game with characters still equipped with rare/blue weapons — except for Daryon who found a purple/epic gear piece as part of the main quest — since I couldn’t be bothered to look for materials I’d never seen before. 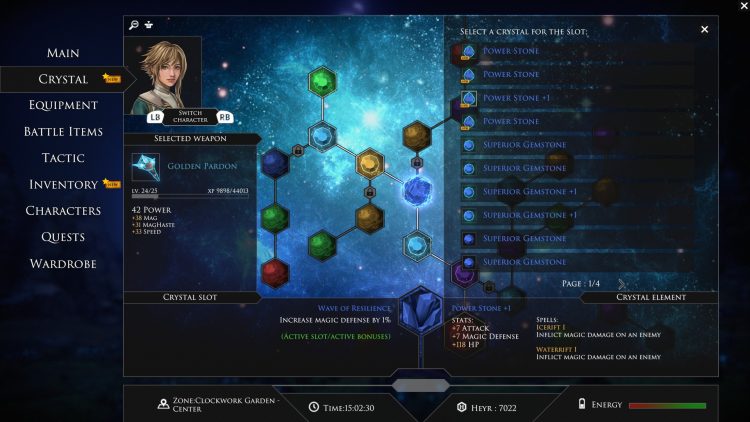 At a technical glance

From a technical standpoint, Edge of Eternity does offer decent performance. With an Intel i9-10900K and Nvidia RTX 3080, I had 4K resolution and maxed out graphics settings, with framerates averaging at 90 to 100 fps. Just as well, there are options that help with immersion, and those that make exploration a lot easier (i.e., enabling fast travel and the minimap).

However, I would be remiss if I didn’t cite the other issues I encountered. These include moments when input commands would disappear, leading me to commit to incorrect attacks or targets. The combat controls could also use a bit of work. Edge of Eternity lacks the option to edit your keybinds, so playing with a gamepad is the way to go. You can’t change the control setup for gamepads either. I tried to use a mouse and keyboard setup, but that was tougher than it should have been. Improvements to the camera system would also be welcome. At the moment, both battle camera options are still too disconcerting as the POV swaps from one character to a target.

There’s a slight slowdown (half a second) when you take images, but this isn’t all that bad. Moreover, there’s a particularly rare bug where your screen would suddenly go dark (save for maybe a few icons or the map). The only choice you have is to restart the game if that happens. 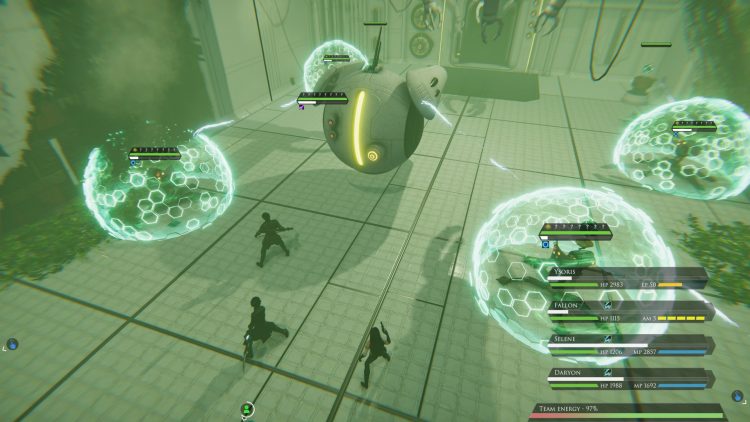 As mentioned earlier, Edge of Eternity has many twists and turns, as well as a few ups and downs. There’s a chance that the story will engage you. Then, poor pacing will disappoint you for a while until the game kicks it up a notch once more. Characters also have voice acting that ranges from bland to unlikeable, as well as facial expressions and animations that can feel off during cutscenes.

In any case, it took me roughly 40 hours to complete Edge of Eternity. Grinding for experience points and a few sidequests also added a chunk to my playtime. I was, however, confused when I finished the game without obtaining a single cosmetic wardrobe piece. Apparently, these are either DLCs or backer rewards, not in-game drops. 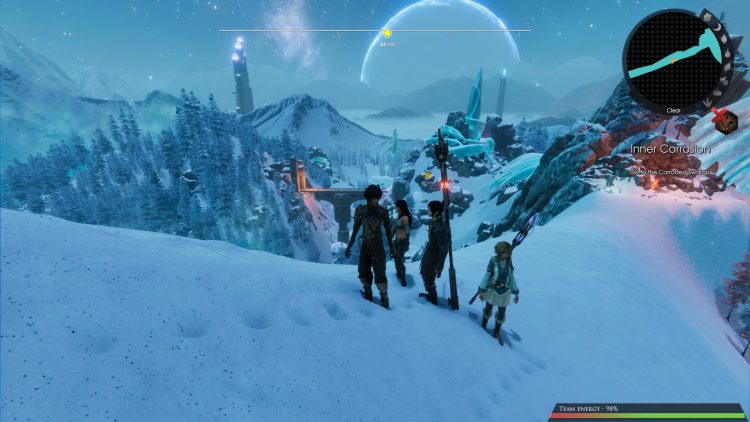 Speaking of completing the game, the cracks do appear as you get closer to the end. I surmise that this is due to the first six chapters being available during the Early Access period, thus allowing for continuous feedback from the community. Meanwhile, the last two chapters added for the official release felt a bit rough. Some plot points aren’t fully realized and others just seemed rushed. There’s even a very random appearance of an unexpected character that made me think of a moment in Game of Thrones.

In the end, you do see how much effort Midgar Studio put into this offering. Indeed, Edge of Eternity is an ambitious project, one with massive scale and scope that very few indie developers can manage. It might be rough around the edges, but the journey should still be worth your while. 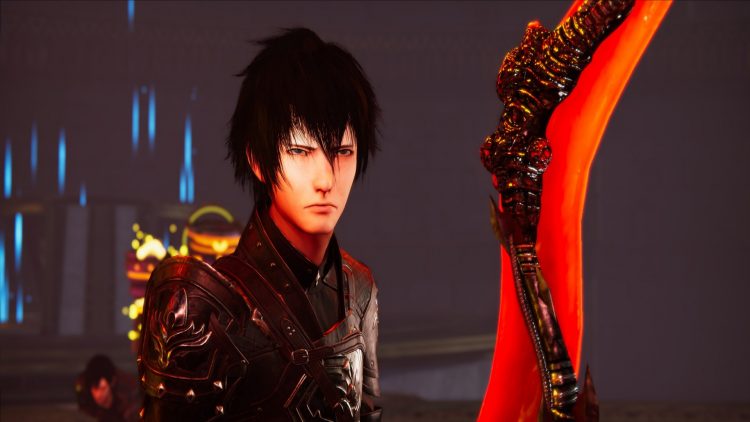 An RPG that mixes fantasy and sci-fi themes. It's set in a world threatened by an invading armada and a destructive plague.
7.5

Ambitious in size, scale, and scope, Edge of Eternity offers a somewhat enjoyable romp that could last you over 40 hours. Sadly, it's also very rough around the edges, and poor pacing can be detrimental to your experience.

Palworld is Pokemon but with guns, slavery, and poaching

Where to find UFO locations how and fly them in Fortnite