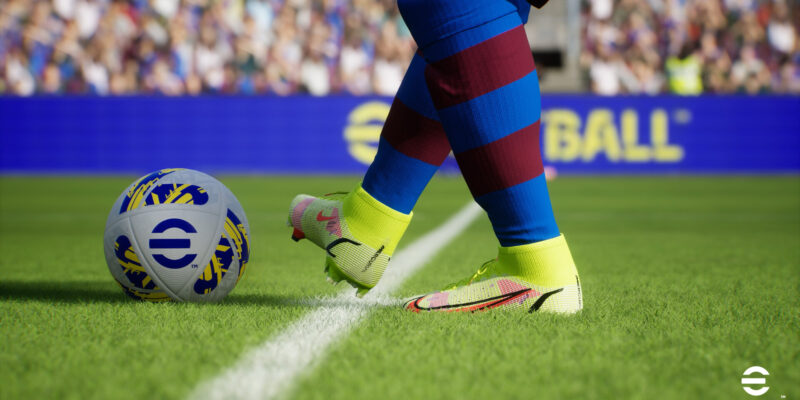 Konami recently announced that it is creating a brand-new way to play soccer by ditching its Pro Evolution Soccer franchise and creating eFootball. I was given access to a closed-door preview of eFootball, where the developer discussed how it has revamped its gameplay to create an authentic soccer simulation experience.

The major gameplay elements that were shown and explained during the preview were controlling the ball, attacking and defending duels, Power Kicks, True Playing Styles & Tactics, and a new Duel Camera. The main man doing the previewing and explaining the gameplay features was Klaus Ganer, Director of Football Data & Scouting.

The message that Konami wants to get across is that the game has changed. It is no longer the Pro Evolution Soccer you may be familiar with. eFootball doesn’t even run on the old Fox Engine. It has been completely rebuilt using Unreal Engine, which is a good move by Konami. It’s what it needed to do to have any hope of toppling FIFA as the go-to soccer game for streamers and esports.

Konami has already changed the eFootball model by moving away from annual releases with minor gameplay updates to an always-on service that will constantly improve. Plus, it will be cross-platform. It’s a much more consumer-friendly model. If the gameplay steps up, eFootball might be the future of digital soccer.

Battles around the pitch

Ganer revealed that the main focus of the revamp has been one-on-one duels, ball movement, and physical battles. He said that in eFootball, you will be able to feel the ball touch and the physical challenges through haptic feedback. Although, the haptic feedback and feel of every touch and pass will only be introduced in a later update. It will be a free update though, and you won’t need to wait for next year’s title.

It’s hard to tell without having a controller in your hands, but the gameplay footage we were shown looked smooth. It seems like you can be very precise about which direction you want your player to move the ball. And you could see the attacker and defender physically jostling each other when they were both near the ball. 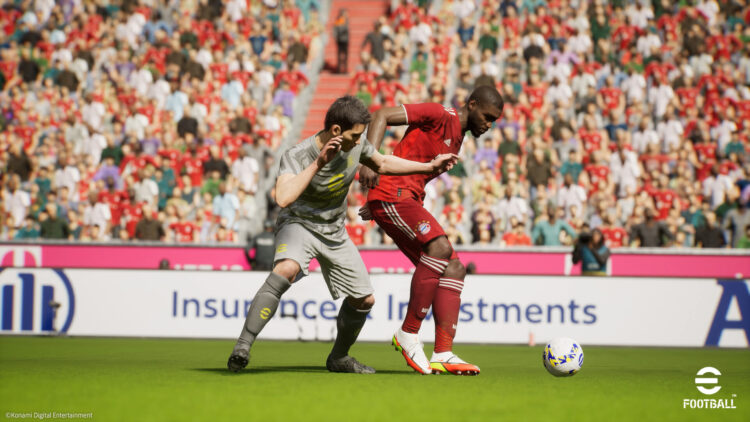 Ganer then revealed something that got me particularly excited for the updated physics and gameplay of eFootball. The developer conducted a lot of research to get the one-on-one system looking and feeling right, and two of the players consulted were Gerard Pique and Andres Iniesta. I’m not even a fan of Barcelona or Spain, but those two know how to move around a soccer pitch. 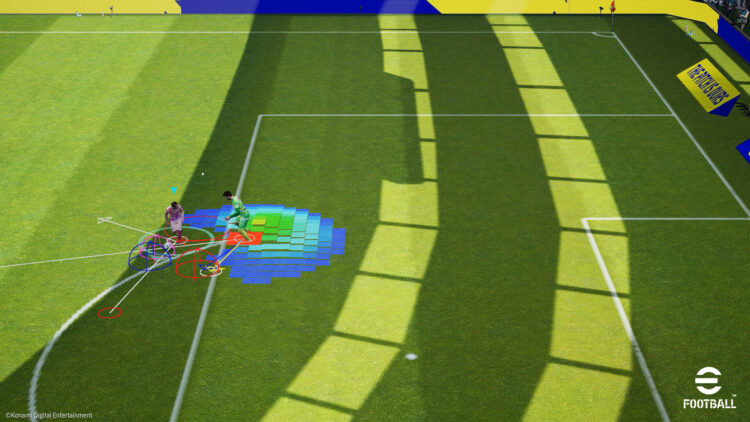 A phrase that caught my attention on the defensive side was, “skilled-based defensive system.” Soccer simulation games, much like the real-life sport, usually focus heavily on the attack. It’s encouraging to see a developer putting more into defense. As a defender, you’ll be able to force turnovers by applying pressure, stand and slide tackling, containing, blocking, intercepting, and applying physical force. I like that Konami has included a button called, “Physical Defending.” It allows you to get strong when you need it. Defenders and other strong players in control of the ball will also be able to use their physical presence to shield the ball from tackle attempts.

Ganer briefly touched on the new kicking system, Power Kicks. It sounds like it gives you a lot of options when it comes to delivering creative passes and shooting at goal. We saw a clip of an outstanding weighted long pass and a dipping strike that went over the keeper and into the goal. You can tell a Power Kick is being used because the power gauge is blue instead of green. But I can’t say how will feel in-game because I simply didn’t see enough. I would like to have seen more detailed examples of this feature in action.

eFootball will offer players five different tactical options, which will change the way your players move around the field. The new tactics system will affect your players’ decision-making while attacking and defending, as well as when they lose or gain possession. The five options you have to choose from are possession, out wide, quick counter, long ball counter, and long ball.

What I like about this system is that you can’t complain about the AI never moving your players into decent positions. You have control over the areas your players will look to move into and attack. So, if you can’t find any passes or space, you need to change your system. It feels like an authentic soccer tactical system that adds a strategic layer to gameplay without getting bogged down in the nuances of football philosophies. 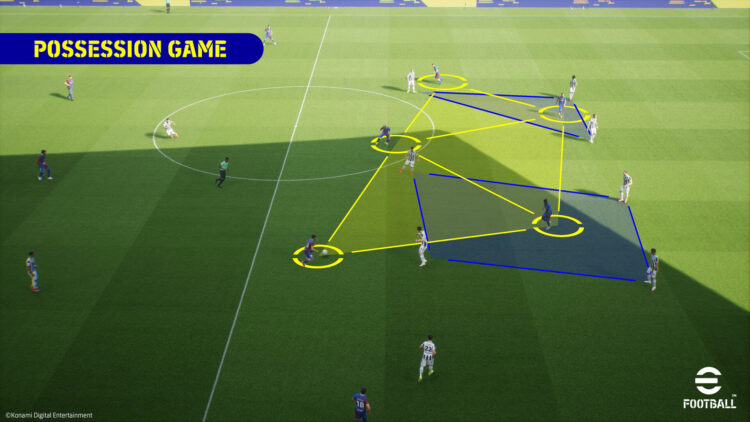 Getting closer to the action

I must admit, I was nervous when I saw mention of a Duel Camera. Soccer simulation titles need to strive for realism, and this sounded like a gimmick. But I was pleasantly surprised to see it’s a reasonably subtle camera movement that zooms into action and then zooms out to give you the big picture the rest of the time. You probably won’t even notice it while you’re in the heat of the moment. But you’ll appreciate the closer view of your player as you’re attempting to finesse your way towards the goal.

As for the general game improvements mentioned earlier, Ganer said that these include natural motion, realistic ball physics and movement, and continuous play. The brief glimpses we were shown of natural motion and the realistic ball physics and movement told me nothing. The clips from the eFootball preview were too short and limited to one action each. All I can tell you is that the ball will not just travel in straight lines and that players will be forcibly slowed when getting physical with other players. 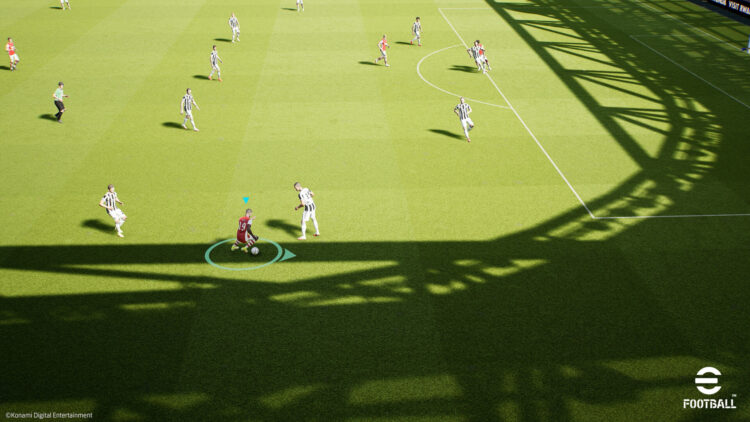 Continuous play is another matter entirely. I love how they have implemented this system. You can take quick throw-ins with the first player to the ball. Ball boys (and hopefully girls) will toss the ball to your goalkeeper if it goes out for a goal kick. Your keeper will then toss the ball down and you can take the kick quickly. In the clip we were shown, you can see players still moving to their designated positions. Goal kicks in FIFA are incredibly repetitive. I love how this mixes up gameplay and gives you alternative options. It also adds another area of gameplay for a ‘Positioning’ statistic to come into play.

We were then shown a full match to get a sense of how all these new elements combine to create the “brand-new soccer experience.” And it looks promising.

The speed the ball travels in passes and shots feels very natural except for the occasional short pass, which felt a tad slow. That may be the result of a cautious player behind the controller and not the players on the pitch or the ball physics. Deflections also looked organic, which speaks to the improvements Konami has made to ball physics. I also like the way the ball moves in the back of the net. It feels natural and random. And that separates the gameplay from the feeling that everything has been scripted. 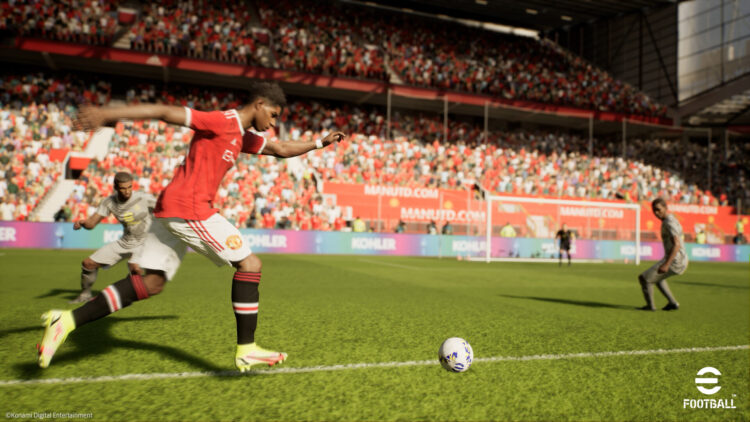 In the entire match we watched, every single shot looked different. There’s always a risk that players uncover one or two techniques that are incredibly effective ways to score. Given I’ve only watched limited gameplay, I didn’t see any obvious evidence of this in eFootball. I would imagine it is because of the realistic ball physics. Ganer even went on to say that he hadn’t seen any of the media who got their hands on the game score a similar goal.

Sticking to the theme of putting you in complete control of your matches, eFootball will allow you to filter your matchmaking preferences. So, you can disable cross-platform if you like. You can match with players in your region, or you can search the entire world. It’s all up to you.

There will be weekly updates to players based on real-world performance and conditions. Plus, there will be frequent content and platform updates. Personally, I’d be happy with seasonal or half-season player updates. But I do appreciate Konami’s dedication to accuracy and authenticity. It gives you another reason to follow real-world teams because the more you know about the players, the shrewder you can be in the transfer market in eFootball. 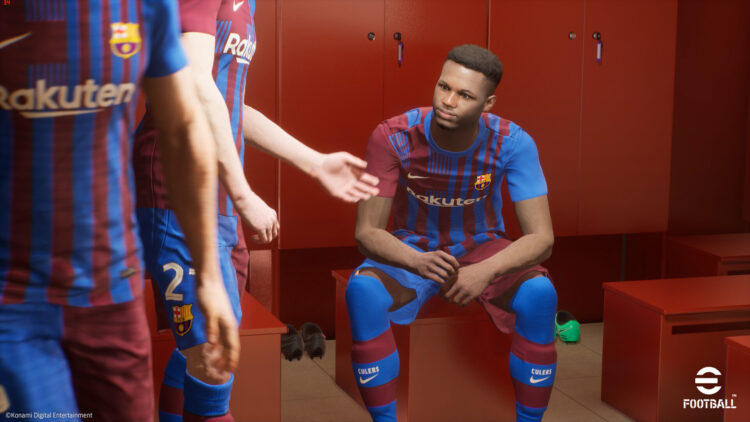 Additional modes, like Master League, will become available down the line. These may be paid premium content, but I’m okay with that. If I’m not going to be purchasing a new title every year, I’m happy to pay for new content that will build on the title I already own.

All in all, I think Konami has made a very good move with eFootball. I’m eager to get my hands on the game to get a better feel for the gameplay. It looks encouraging. We could be at the beginning of a new era for digital football. Although I must admit, I don’t love the name eFootball. But it will do a good job attracting non-traditional gamers who are soccer fans to the digital sport.