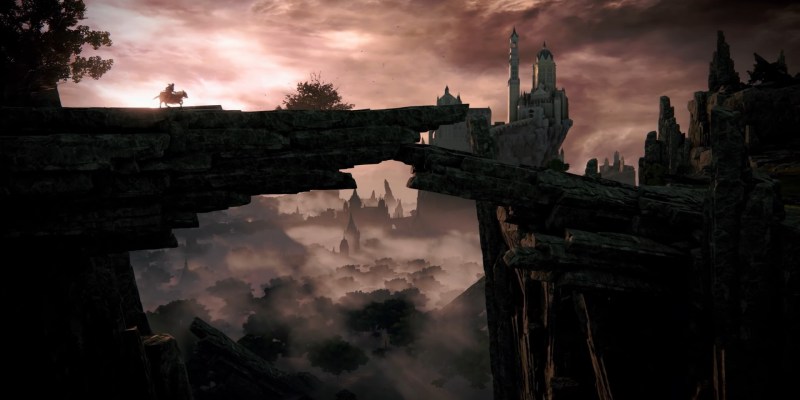 The last few days have proven to be quite spectacular for Elden Ring. For two years, fans had been clamoring for hints, a screenshot, or literally anything on FromSoftware’s next big action RPG. Following its gameplay reveal at E3, more information has been coming out. Earlier today, Hidetaka Miyazaki, the famed creative director behind Souls games and Elden Ring, dropped even more on the game. Miyazaki opened up on what to expect when Elden Ring arrives, including its hub-world map, lore, abilities, multiplayer, stealth, fast travel, and more.

Talking with IGN, Miyazaki explained how the world of Elden Ring will be laid out. There will be six areas to travel to in The Lands Between — a name that Miyazaki reports was thought up by George R.R. Martin. The lands are linked by a hub area, so it’ll be similar to that of the Firelink  Shrine or Majula. It’s up to the player on what area to tackle first. However, Miyazaki said that not everything can be accessed right away, but “there’s a lot of freedom as to which order you tackle different areas.” There will also be a fast travel system, likely allowing you to swiftly revisit places you’ve been.

Each of the six areas will contain places to explore and a objectives. Dungeons, castles, and more can be found in the areas. I’m expecting that these map segments are walled off from one another. Also, I’d wager a guess that mini-bosses can be found throughout each area. However, there will be a main boss, or “demigod,” lording over the land. Looking back at Dark Souls, there could be something akin to Lordvessels to collect throughout the Elden Ring map. 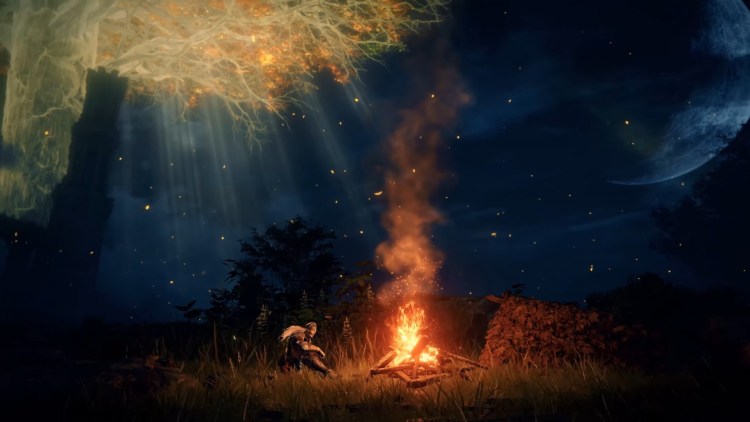 There will be a hub area to call home.

Soulsborne fans have long enjoyed the nuanced storytelling of the games. For the most part, players never got hit over the head with exposition. Each game’s lore was sequestered in item descriptions and woven into the world design. We’ll likely see something similar with Elden Ring, as its premise is steeped in a mystery that revolves around the Tarnished and their role in The Lands Between.

“So first of all, in the world of Elden Ring, The Lands Between are blessed by the presence of the Elden Ring and by the Erdtree, which symbolizes its presence, and this has given grace or blessing to the people throughout the land, great and small,” Miyazaki said. “What this represented in them is this sort of golden light, or this golden aura, that’s specifically shown in their eyes. And this symbolizes the blessing or the grace of the Erdtree. However, after a time, there were some individuals who lost this grace, and the light faded from their eyes. And these are what are known as the Tarnished.” 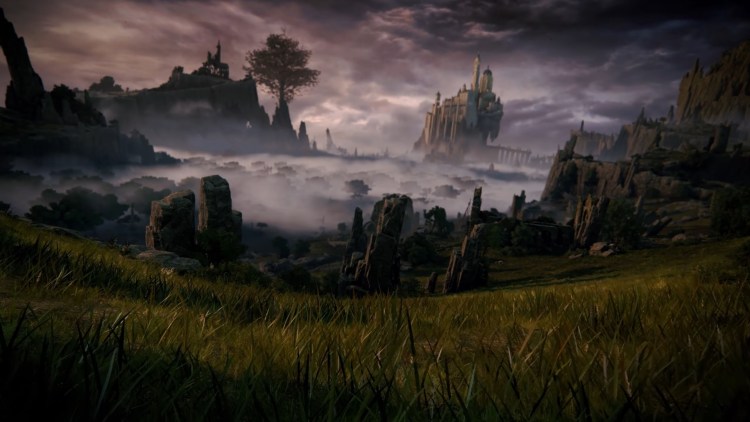 The map in Elden Ring is comprised of six areas.

Miyazaki also spoke with Japanese game magazine Famitsu. Loosely translated by Google, Miyazaki said Elden Ring will allow you to create your own character once again. There will also be multiple endings, but you won’t be locked into them per se. We saw hints of multiplayer in the gameplay trailer, and indeed you will be able to summon friendly spirts to assist you in jolly cooperation. To encourage exploration of its massive, six-area world, Miyazaki said that fall damage has been decreased. This is good news, as the game does allow you to jump around. We wouldn’t want any unfortunate mishaps.

You’ll have a lot of control with your character build. While you’ll be able to choose your abilities (out of 100 available), they are no longer locked to particular weapons like in Dark Souls III. Miyazaki also hinted that abilities can be altered based on weapon combinations. Elden Ring is sounding like it’ll embrace replayability like few FromSoftware games before it.

The amount of new information on Elden Ring has been refreshing of late. We expect there will be a lot more details coming out ahead of its release date of January 21, 2021.