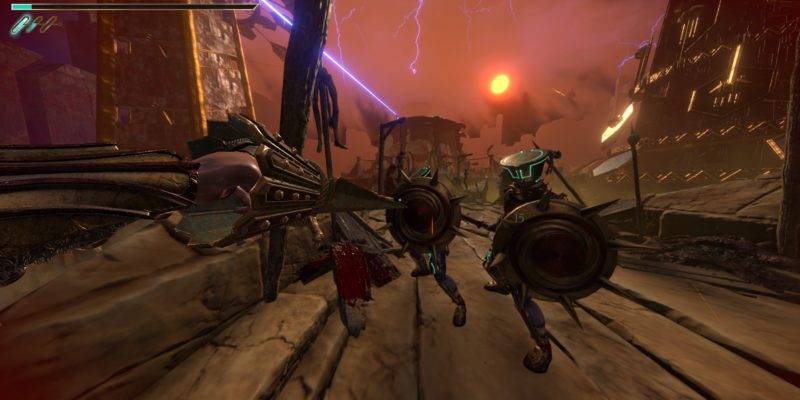 When Hyperstrange‘s Elderborn first entered Early Access in October of 2018, I was impressed by many aspects of it. Only the first chapter was included, but the visuals, game mechanics, and weapons were well-realized and intriguing. But one thing was severely amiss: The enemy placement was horrible. “Sure, this is problematic now, but it’s still early in development. They’ll certainly fix it as time goes by.”

But they didn’t. Astoundingly, some sections that I found particularly egregious 15 months ago have gotten worse. The thing is, Elderborn does a lot right. Despite its disappointingly scaled-back third chapter, this could be an enjoyable, solid game. But the enemy placement and baffling obsession with throwing hordes of enemies at you at all times are massively detrimental to the overall experience. Let’s dig into what it does well and how it messed up so badly.

Born as a stranger

Elderborn begins with a cutscene composed of hand-drawn images with voice acting that sets the stage. You pick either a male or female hero who has been sent on a pilgrimage by your village’s elders. Your goal? To make it into the city of Jurmum and reclaim what rightfully belongs to your people. There are only a few cutscenes such as this throughout the game, but there are glowing codex entries for you to find that offer lore if you’re so inclined. 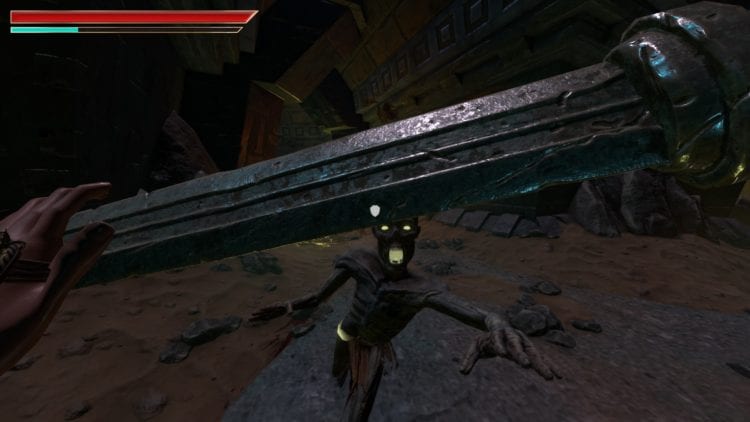 For the majority of the experience, you’ll be left to your own devices as you fight your way through the game’s various areas. The story is decent for what it is though, even if it goes kind of screwy at the end with a large amount of information being dumped during the end credits. The entire ending of the game is similarly rushed and feels questionable regarding what came before.

To put it bluntly, yes, Elderborn is a Souls-like. You fight tough enemies that drop experience and activate objects where you can spend that experience. When you die, you’re taken back to the last activated object, all the enemies are respawned, and your experience awaits in the spot you met your bitter end. But it doesn’t play like most others in the subgenre. For starters, it’s completely first-person and is more of a brawler than anything else.

You begin the game with a sword and can slash, block, kick your enemies, and dash out of harm’s way. There are a handful of different weapons in the game that either block just like the sword or parry, leaving your enemies open to devastating counterattacks. Each weapon also has a unique ability. For instance, the starting sword reduces incoming damage by 20%. A spear, on the other hand, parries instead of blocking and does additional damage based on how far you are from your foes. 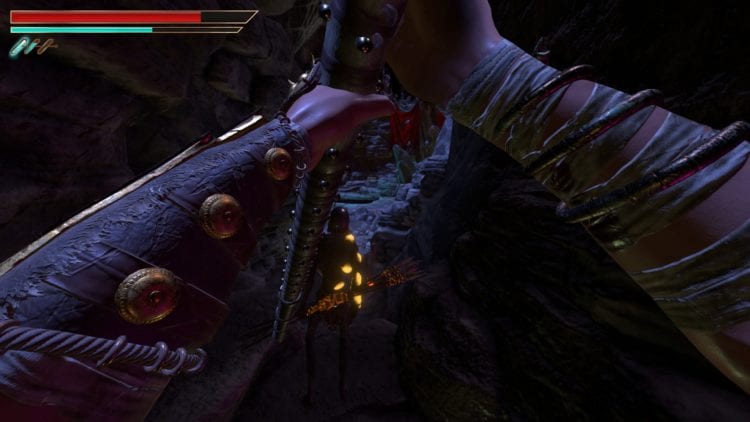 Weapons come in slashing, stabbing, and blunt varieties and are more useful in certain scenarios, with each having a light attack and a heavy attack if you hold the button down. However, you’ll tend to stick to specific ones once you acquire them, as they’ll typically be outclassed by similar weapons later. Each weapon has a mastery aspect as well, which simply grants you 5% extra damage once you dispatch 100 enemies with it.

Ain’t that a kick in the head

Enemies can also be kicked to their deaths off of platforms, but this doesn’t work all the time, as enemies sometimes treat the edges of platforms as invisible walls. I died more than once while trying desperately to kick an enemy off a platform, only to watch as they wouldn’t budge while on the edge. This often resulted in me getting shoved to my death by an enemy behind me.

Kicks can be used to knock enemies down as well, although that doesn’t always work. Kicking the shield of a blocking enemy will also create an opening, making the kick very useful if you aren’t relying on parries. There’s even an unlockable charge attack you can use by holding the kick button if you’ve got enough points into one of the three categories on your skill tree. 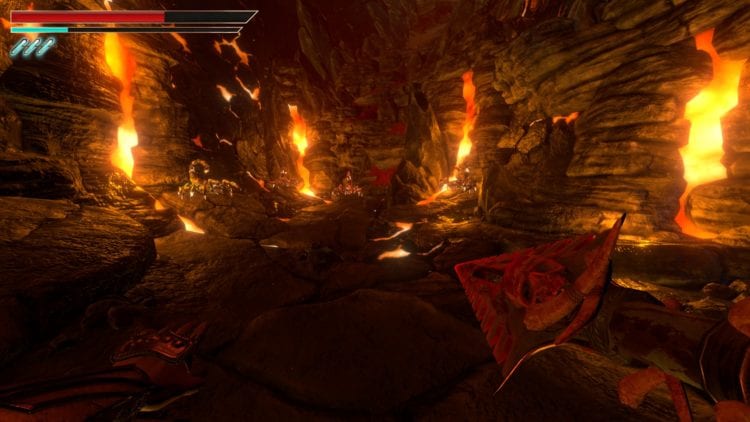 Having enough experience will allow you to convert it into a skill point at the checkpoint objects. The categories allow for additional damage, faster attack speed, or more health. Each has three perks that you can choose with enough points invested, although it’s unlikely that you’ll reach this point without doing some serious grinding. Some of these perks are extremely useful in spots, though, like being able to redirect some enemy projectiles via a successful parry.

If you marry me, would you parry me?

Parrying is completely instrumental in surviving in Elderborn. If you’re not good at it, you won’t be able to get past the game’s first boss. It works decently, at least, but its implementation can feel lacking. You can’t parry immediately in the middle of your attack animations, but the button press will still register, which can lead to problems. This means that, if an enemy suddenly comes out of left field while you’re fighting another and you press the parry button, you’ll continue attacking and then parry uselessly once the animation becomes possible.

There’s also a noticeable cooldown on your parry. If you’re fighting an enemy that attacks you over and over again in quick succession and you mistime your parry, it’s unlikely that you’ll be able to use it again in time before the next attack lands. The best recourse here should be to try and dash away, but since Elderborn throws so many enemies at you at once, this can lead to your dashing right to another enemy you can’t see, resulting in a quick death. Therefore, you’ll instead want to try and switch to a blocking weapon to survive the onslaught. You probably won’t, though. It’s worth mentioning that the game borrows Bloodborne‘s “hit an enemy shortly after taking damage to recover some life” mechanic. 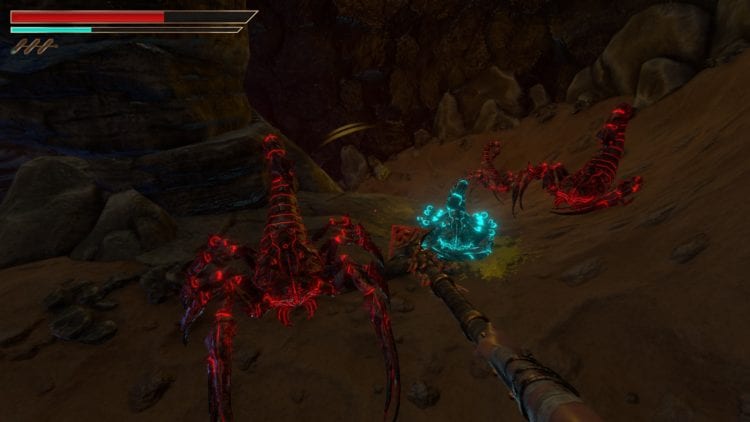 The combat in Elderborn is pretty enjoyable when you’re going one on one with the game’s foes. Carefully watching their animations and responding while taking advantage of their openings can be satisfying. There’s also a decent amount of weight to your strikes that makes everything feel all the more impactful. But you won’t generally get to enjoy the game in this manner.

One of the most important aspects of a Souls-like’s design is its enemy placement. Where are they standing? How far away do you have to be to aggro them? How do the different enemy types play off of each other and how many of them are there? These and more are typically considered very carefully, as much of the tension and challenge come down to this aspect. Instead, Elderborn just throws them at you in groups. 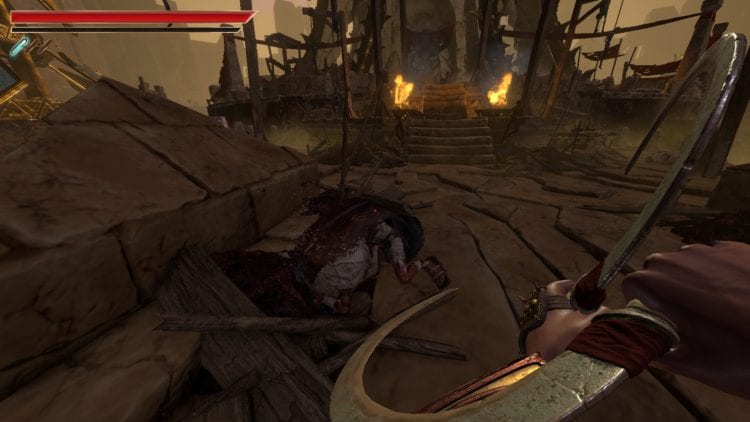 Unlike most other games in the subgenre, the areas are often designed in a way that requires you to fight. Running away often leads to getting surrounded with no way to press forward. The enemies also follow you further than you’d likely imagine.

You just almost always have to fight way too many enemies at once. And there’s usually one or two projectile-based foes constantly shooting at you while you’re trying to do so. These enemies are very dangerous and you need to focus while fighting them. But Elderborn is so obsessed with being badass and difficult that it doesn’t want to let you focus on them.

There are plenty of times where you’ll get trapped in an area with no option but to fight a ton of enemies at once. One section has you flip a switch that slowly unbars the exit. But it also opens several chambers filled with enemies. When all is said and done, you’re going to need to fight about a dozen of these at the same time while carefully kiting them around the room. It’s asinine. 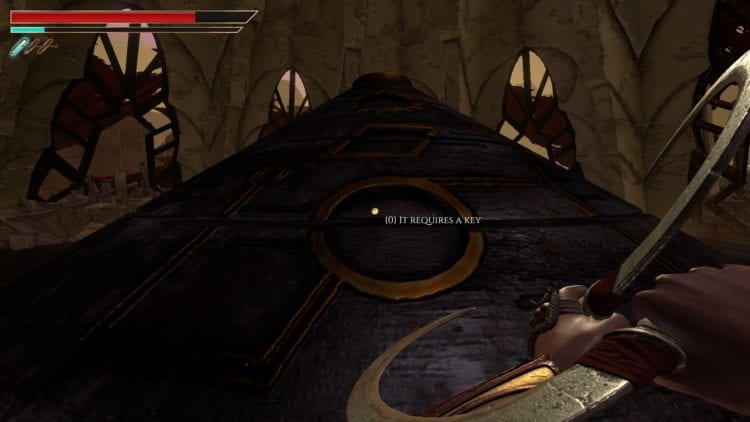 It doesn’t help that some of the enemies are just broken, such as an enemy that takes far too long to kill and whom you have to fight alongside several other enemies while hoping it doesn’t sneak up behind you and one-shot you.  It’s very easy for the enemies to slip out of your field of vision and hit you like this.

Being aware of your surroundings is insanely important, but you’ll be so surrounded that you can’t. While Elderborn‘s first chapter takes place in tight areas where you can somewhat keep tabs on everything around you, chapter 2 takes place in a much more open space. This means that it becomes even more difficult to keep tabs on your foes. The game also loves to throw enemies at you in mobs that you haven’t had a chance to figure out yet. So, you’ll have to try and do so against several new enemies at once. It just doesn’t really work. 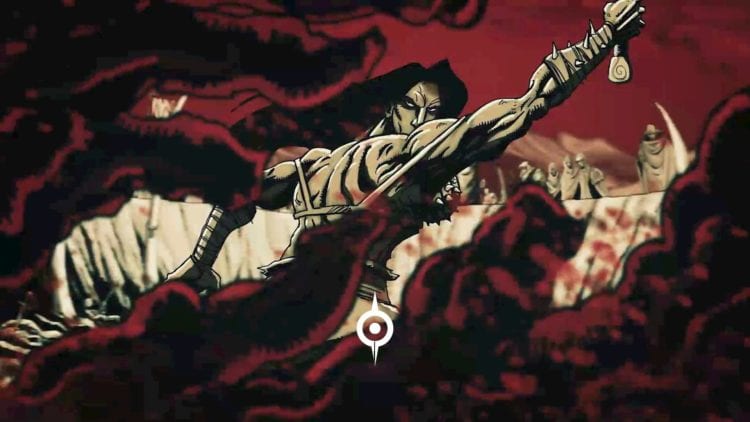 By the time I learned how to handle all of chapter two’s mobs, the chapter was over. I died so much during that entire part that I almost never got to level up, as my dropped experience was always disappearing due to how you get surprised by a new gank mob every few feet. It really does feel like someone dropped all the enemies in at random. It’s that bad.

There are three chapters total in Elderborn. The third chapter just takes you to various unconnected areas where you have to, wait for it, fight multiple mobs of enemies. It’s really jarring and feels like the game is just in a hurry to wrap itself up at this point. 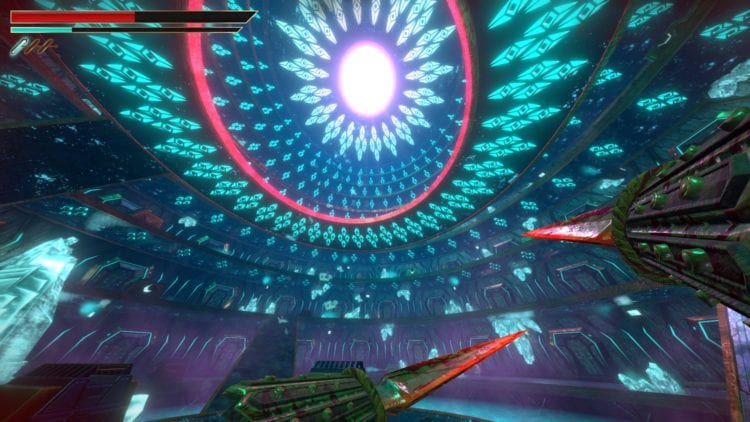 There are a couple of boss battles, but they’re mostly underwhelming. One of them is just a lazy copy of the Ornstein and Smough battle that people love to rip off. Strangely, there’s no final boss. You just fight enemies for a while and then interact with an object. Then the credits roll with text where the main character narrates what happens to them. It just feels unfinished.

And the game’s failings are a shame. It’s very clear that a lot of talent and energy went into making it. Many aspects of it are entertaining and well done, but it’s just ruined by the haphazard enemy placement. As a result, Elderborn is simply too frustrating and cheap for me to recommend to anyone other than people who are fond of “difficulty-porn” games like I Wanna Be the Guy.

The lack of a real third chapter also really damages it because, even if the enemy placement gets fixed, the game just kind of gives up after the second chapter. If you’re looking for a well-balanced, fun Souls-like, you probably won’t find this to fit the bill. But, hey, if you love getting crushed by mobs before you’ve learned how to deal with the enemies that compose them, then you’ll probably get a kick out of this. As it stands, though, this is one of the most annoying games I’ve played through in recent memory. 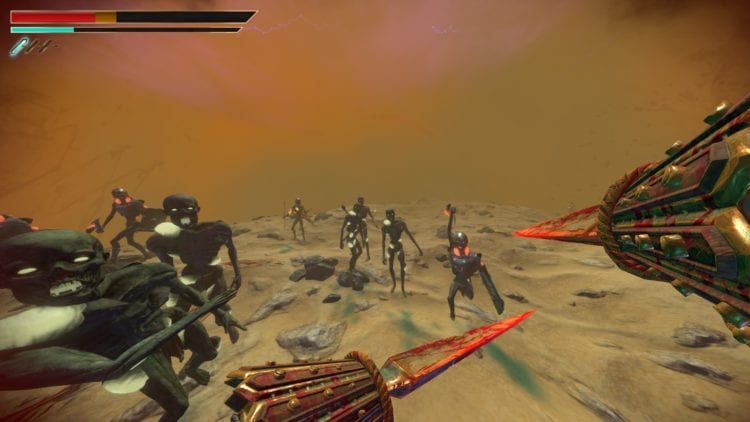 Elderborn is almost a good game. It's got most of the ingredients that would require, such as strong visuals, tight gameplay, and varied enemies. But the placement of those enemies is so terrible and ill-conceived that it basically ruins the entire game. That along with a third act that feels like the game just gives up do a whole lot to damage what could have been a very compelling experience.

Disintegration beta: Crew and Gravcycles overview – Which is the best for you 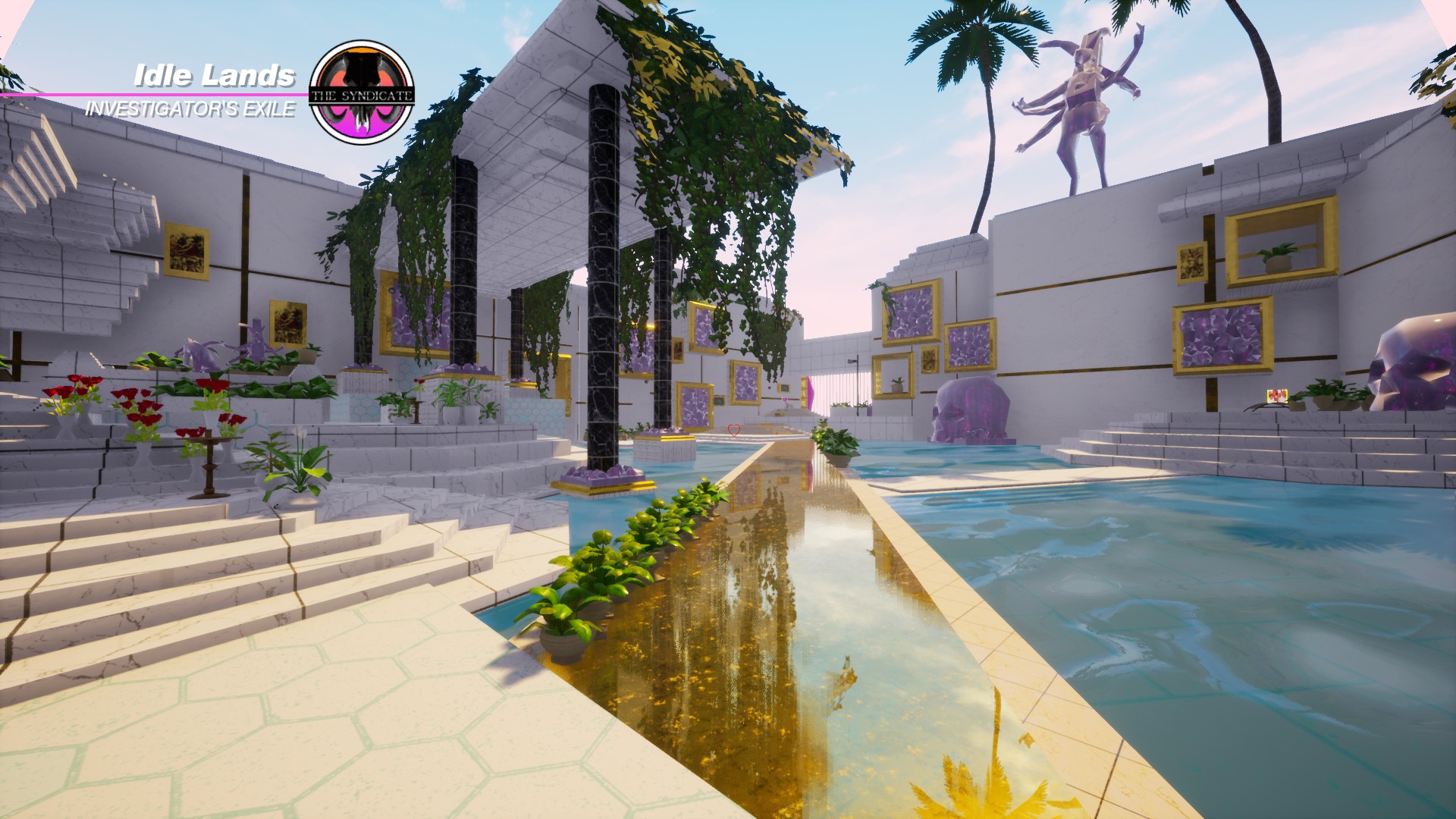 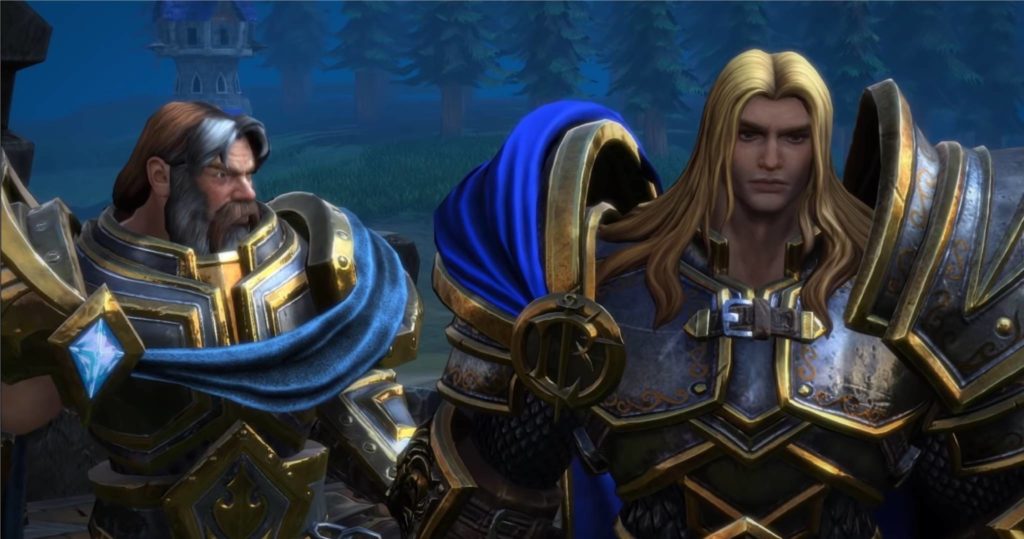 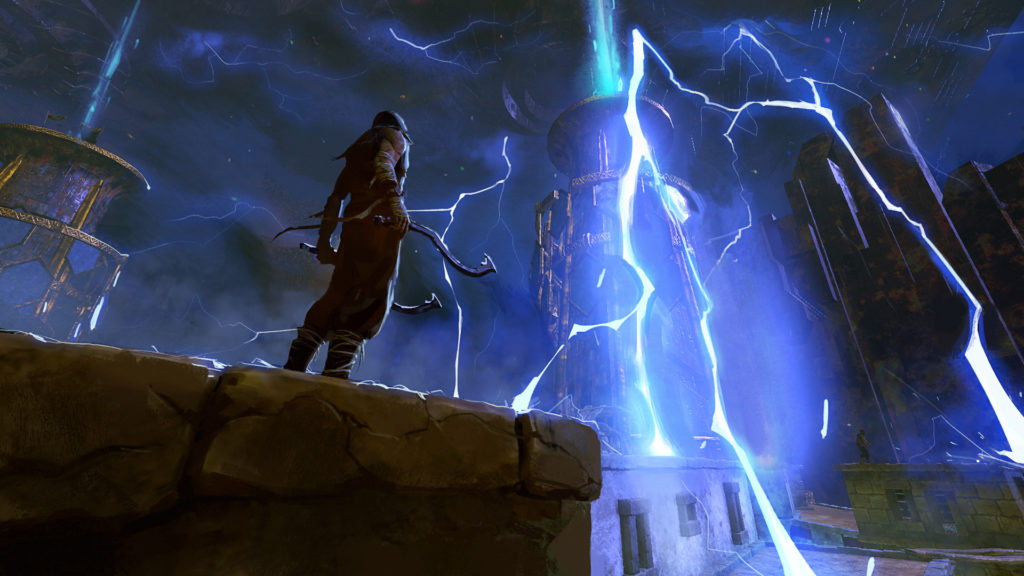 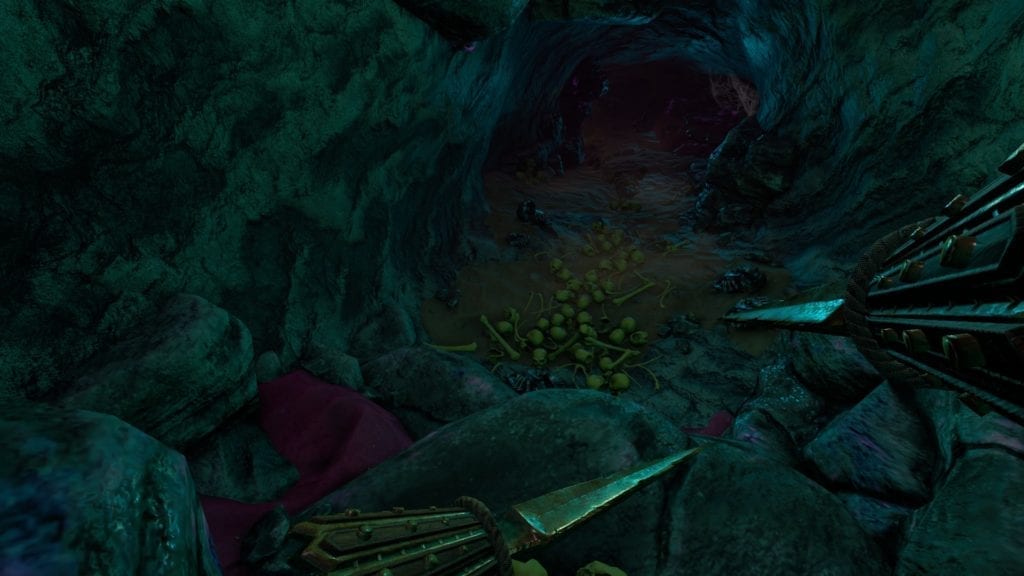