Gaming keyboards are usually pricey affairs, and unless you’re a real pro, the price tag tends not to be worth it. There are always cheap options available to PC gamers but, conversely, these usually lack those little extras that can make gaming more pleasurable.

In this feature we’re looking at two new keyboards aimed squarely at the budget gamer from Element Gaming: the mega budget Thorium 100 and the slightly more pricey 300, which really is aimed squarely at gamers. Both are part of Ebuyer’s new Thorium range.

The Thorium 100 is a no frills keyboard priced at a super low £12.99. The black design has that gaming keyboard look, but it’s essentially it’s a basic keyboard with a few hotkey buttons along the top. To keep costs down there are no fancy backlights, but to add at least a little pizazz the ‘board cunningly comes with a set of different coloured keys which can replace WASD.

Removing keys from a keyboard doesn’t always go that well, since there’s always the risk something will break and snap. To get around this problem, the keyboard comes with a nifty key pulling tool which with one quick tug removes any key you want. It’s not exactly high-tech but it works well enough.

With this being a basic keyboard there’s not whole lot else to say, other than the fact that it has performed brilliantly for the past couple of weeks and I particularly like the feel of the rough-ish key surfaces. For anyone new to gaming or just on a serious budget, the Thorium 100 is worth a look.

A blue base helps make it look a little different.

The other new Element Gaming keyboard in the new range is the Thorium 300, which comes with the slightly more expensive price tag of £24.99. It’s still not exactly going to break the bank and offers some different options to the 100 model.

The Thorium 300 looks even closer to the typical gaming keyboard design, with backlit keys and lit trim along the sides and top of the board. Lights are all well and good, but what about features?

The keyboard comes with a configuration tool which enables macros to be set and speed key adjustments. This configuration tool is fairly nicely done. It looks a little rough, but works as you’d expect. There’s a keyboard layout, and it allows you to set keys by clicking on a desired key when creating different macro profiles.

Profiles can be set for specific games, so when the game launches the keyboard will recognise the profile and uses anything that’s been set up for that specific game. How useful this feature is depends on the individual, but the option is there and can save you messing about with the config utility each time. 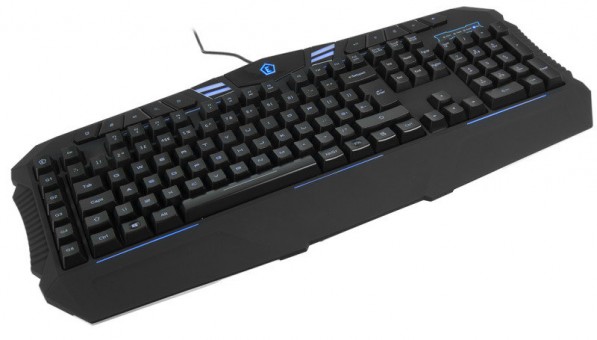 That’s better. All the extras you’d expect to see..

This 300 version is a lot larger than the cheaper 100, which is perhaps to be expected. However, that doesn’t necessarily mean it’s more comfortable. There’s a much wider wrist rest but it isn’t as supportive as I would like when using it for normal typing. With the back legs extended the 300 still feels a little too flat.

Another gripe, and again this is down to personal preference, are five “G” keys on the left of the normal keyboard layout (G1 through G5.) If you’re not a complete typing wizard then there’s a tendency to hit these by accident instead of the TAB, CAPS, Shift or CTRL keys. With some practice you can get used to them being there, but it’s something to keep in mind.

These five “G” keys do need to go somewhere, because they can be used for quick shortcuts – giving access to extra keys for games if needed. Their position, while it may be cumbersome for some users, does put them handily close to the WASD keys for quick presses. Again, these functions can be set up via the configuration tool.

Along with the usual quick hotkey buttons across the top for media, browser and email functions, there’s  also a E logo button which sits above the five “G” keys on the left. This special button at first glance looks like it’s just to change the colour of the Element Gaming logo along the top but is, in fact, a quick way to switch between any profiles you may have set up.

This key is obviously only useful if you actually want to mess with the profiles, but you could also try to impress passing strangers by changing the colour of the logo. Speaking of light features, the keyboard can be lit in three colours: red, blue and purple. The brightness of each of these colours can be further adjusted.

A feature that I really do like on the Thorium 300 keyboard is the Function key. When pressed, it can be used to do everything from adjusting the sensitivity of keys, lighting brightness, media controls and even locking the annoying Windows key.

This 300 version is a lot larger than the cheaper 100 which means the keys are more spaced out and therefore more comfortable to use for those long gaming sessions. It’s a good size but not overly huge.

Element Gaming has made a good start with these keyboards. While the 100 is a really basic keyboard, that’s exactly what it’s intended to be. It does what it should with a semi-gaming look and is well worth the £9.99.

The more expensive 300 is still super cheap when you compare it to other gaming keyboards with the same functionality.

It will be hard to find a keyboard this good at the small asking price. With plenty of configurable keys, macros, and even some nice lighting, the 300 is well worth the money. With some extra tweaks to the wrists rest this would be almost perfect, but at this price tag that’s a minor gripe.

TOXIKK trailer hopes to move you with movement discussion